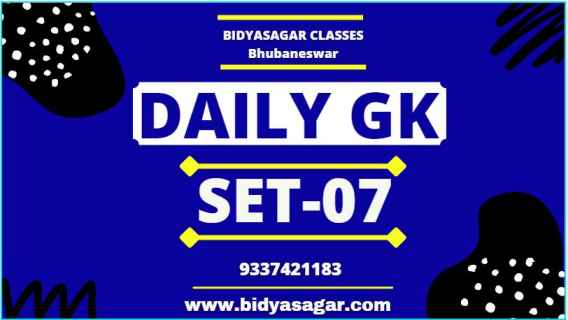 1. Which one of the following statements about the Chief Justice of India (CJI) is not correct ?
A. He appoints the Chief Justice of all High Courts.
B. The CJI administers the oath of office to the President
C. When both the offices of the President and Vice-President fall vacant simultaneously, the CJI discharge the duties of the President.
D. The CJI can hold his office till he attains the age of 65 years.
2. The States reorganization in 1956 created _
A. 17 States and 6 Union Territories
B. 17 States and 9 Union Territories
C. 14 States and 6 Union Territories
D. 15 States and 9 Union Territories
3. Which article of the Indian Constitution for all citizen in public employment ?
A. Article-22
B. Article-16
C. Article-20
D. Article-25
4. Reservation for the Scheduled Castes and Scheduled Tribes in the service has been provided in the Indian Constitution under
A. Article 375
B. Article 315
C. Article 335
D. Article 365
5. Which Article of the Indian constitution provides free and compulsory education to children?
A. Article 21-A
B. Article 46
C. Article 39
D. Article 15
6. Which among the following do not participate in election of the President?
A. Elected members of both the houses
B. Elected members of legislative assemblies of states
C. Elected members of legislative assemblies of Delhi and Puducherry
D. Nominated members of state legislative assemblies
7. Concept of Judicial Review in Indian Constitution has been taken from which country?
A. Ireland
B. USA
C. Australia
D. Canada
8. Who among the following is constitutionally empowered to alter Scheduled Area?
A. Supreme Court of India
B. High Court of State
C. Prime Minister of India
D. President of India
9. Martial law is _________
A. sudden overthrow of a government illegally
B. a system of rules that takes effect when a military authority takes control of normal administration of justice
C. territory under the immediate political control of another state
D. None of these
10. Formation of a new state in India is done by _____.
A. Special Majority
B. Simple Majority
C. Without Majority
D. None of these
11. Which state government has announced Jan Anushasan Pakhwara (JAP) or Public Discipline Fortnight?
A. Madhya Pradesh
B. Rajasthan
C. Uttar Pradesh
D. Bihar
12. With which online travel company the Ministry of Tourism signed an MoU to strengthen the Hospitality & Tourism Industry especially during COVID?
A. Cleartrip
B. Ease My Trip
C. Yatra
D. Both A and B
13. Former Union Minister Bachi Singh Rawat has passed away recently, he was associated with which political party?
A. BJP
B. Congress
C. Rashtreey Janta Dal
D. Samajvadi Party
14. National Awardee Sumitra Bhave has passed away recently, she was a veteran _____.
A. Actor
B. Lyricist
C. Filmmaker
D. Choreographer
15. Under whose chairmanship the Reserve Bank of India has set up a six-member committee to carry out a comprehensive review of the working of Asset Reconstruction Companies (ARCs) in the financial sector ecosystem?
A. Sudarshan Sen
B. Vishakha Mulye
C. P N Prasad
D. Abizer Diwanji
16. Who launched the Startup India Seed Fund Scheme (SISFS) aims at providing financial assistance to startups for proof of concept, prototype development, product trials, market-entry, and commercialization?
A. Narendra Modi
B. Nirmala Sitharaman
C. Anurag Thakur
D. Piyush Goyal
17. Veteran writer Ganjam Venkatasubbiah passed away recently; he was a writer of which language?
A. Tamil
B. Telugu
C. Kannada
D. Malayalam
18. What is India’s rank in the Henley Passport Index 2021?
A. 56
B. 65
C. 84
D.88
19. Which country’s passport has been adjudged as the most powerful passport in the Henley Passport Index 2021?
A. Japan
B. Singapore
C. Germany
D. South Korea
20. Mirabai Chanu is associated with which sport who set a new World Record recently?
A. Wrestling
B. Boxing
C. Weightlifting
D. Shooting

The States Reorganization Act 1956 was a major reform of the boundaries of India’s states and territories, organizing them along linguistic lines. lt divided the country. Into 14 states and 6 union territories:-is. The Act was implemented in November, 1956.

Article 16 of the Indian Constitution deals with equality of opportunity in matters of public employment. It states that no citizen shall, on grounds only of religion, race, caste, sex, descent, place of birth, residence or any of them, be ineligible for, or discriminated against in respect or, any employment or office under the state.Equal Employment Opportunity (EEO) principles apply to:

Hence option B is the right answer.

Article 335 of the Indian Constitution deals with the claims of SCs and STs to services and posts, without sacrificing the efficiency of administration. However, the 82nd Amendment Act of 2000 provision in favour of the SCs and STs for relaxation in qualifying marks in any examination or lowering the standards of evaluation, for reservation in matters of promotion to the public services of the centre and the states.

Nominated members of state legislative assemblies do not participate in election of the President. The President of the Republic of India is the ceremonial head of state of India and the commander-in-chief of the Indian Armed Forces. The president is indirectly elected by an electoral college comprising the Parliament of India (both houses) and the legislative assemblies of each of India’s states and territories, who themselves are all directly elected.

Martial law is a system of rules that takes effect when a military authority takes control of normal administration of justice. The Martial Law is mentioned in the Article 34 of Indian Constitution. Till now, martial law has not been used in India.
Hence, Option B is the correct answer.