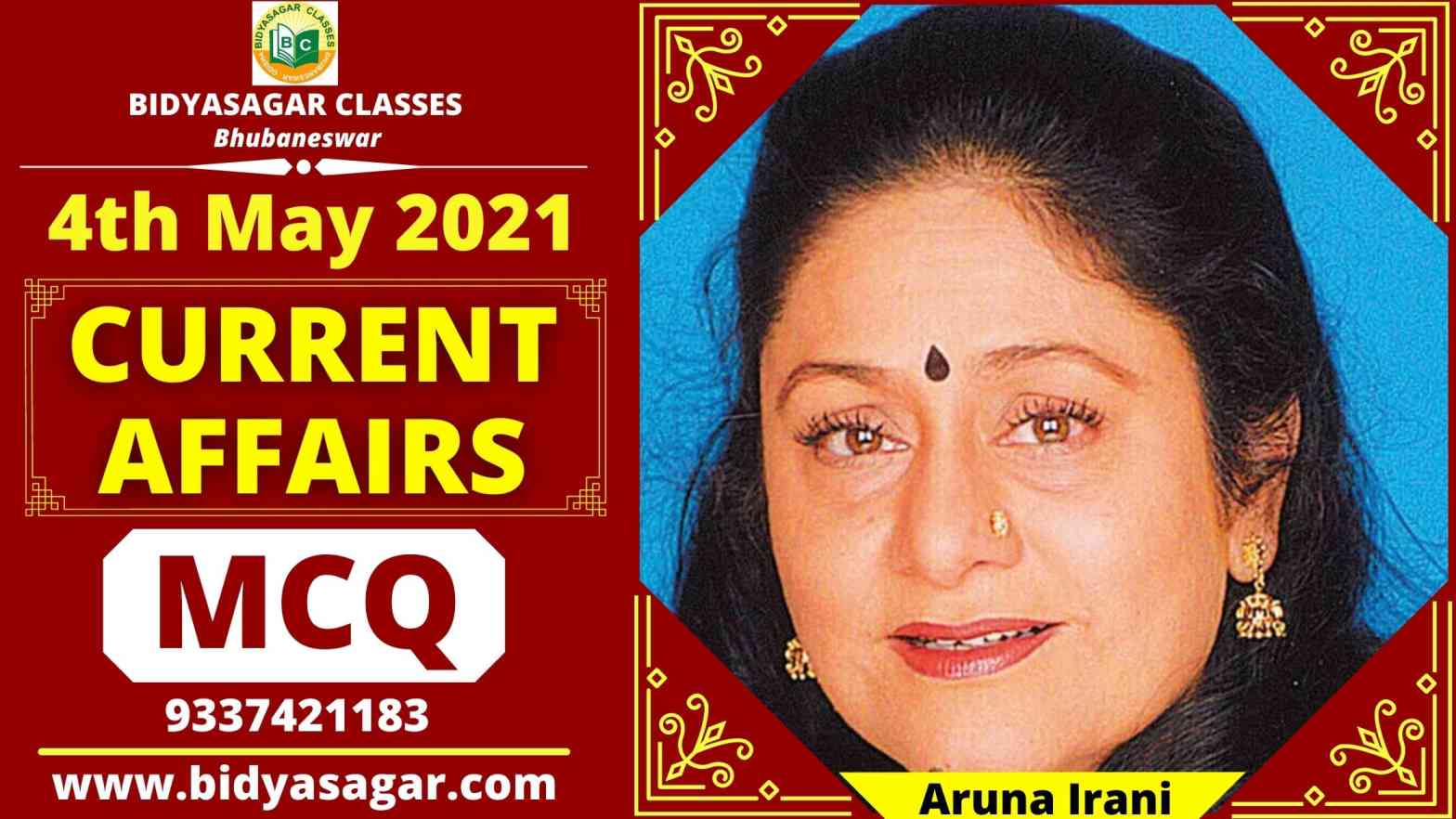 1. How many crores of rupees have been allocated by the State Bank of India to deal with the second wave of Covid-19?

2. Which state government has recently banned this year’s Chardham Yatra in view of the increasing infection of Corona?

A. Government of Kerala

B. Government of Gujarat

3. Which day is celebrated all over the world on 4 May?

4. Which state has recently submitted an annual action plan to make “Har Ghar Jal” a state?

5. In which ministry has Mr. Sanjay Kumar Mohanty recently taken over as the new member of operations and business development?

A. Ministry of Railways

B. Ministry of Information and Broadcasting

6. Who has recently been notified to allow the import of an oxygen concentrator for personal use?

7. Aruna Irani, who worked in more than 300 Hindi films, has recently passed away at the age of?

D. 88 years
8. Which of the following countries has recently become the first country in the world to allow the use of slow self-driving cars on motorways?

9. What is the estimated GDP growth rate for the Indian Economy as per the rating agency BARCLAYS for the financial year 2021-22?

11. When is the World Press Freedom Day commemorated all over the world?

C) First Monday of May

12. With which non-QUAD country has India decided to establish 2+2 dialogue at the foreign and defense minister level, in a first-of-its-kind initiative?

13. Name the fourth Deputy Governor of the RBI, who has recently been appointed in place of B P Kanungo

15. Thisara Perera has recently announced his retirement from international cricket. He was playing for which country?

16. When is the World Laughter Day observed?

A) First Sunday of May

D) First Saturday of May

17. The International Dawn Chorus Day is an annual observance to celebrate the sounds of birds. When is the day observed?

A) First Monday in May

C) First Sunday in May

A) Journalism without Fear or Favour

B) Information as a Public Good

C) Media for Democracy, Journalism, and Elections in Times of Disinformation

D) Keeping Power in Check: Media, Justice and The Rule of Law

19. The International Firefighters’ Day (IFFD) is celebrated annually on which day?

20. Who among these is not serving as one of the Deputy Governors at RBI?

Uttarakhand Chief Minister Tirath Singh Rawat has recently stopped this year’s Chardham Yatra in view of the growing Corona infection in the state. Now only and Tirthapurohit temples will continue to worship regularly. On May 14 this year, the Char Dham Yatra was, to begin with the opening of the Yamunotri temple.

The National Committee of the Ministry of Hydropower of Himachal Pradesh has recently presented an annual action plan to create a “Har Ghar Jal” state under which Himachal Pradesh till July 2022 ‘ Every house will become a state with water. At present, there are 17.04 lakh rural households in Himachal Pradesh, in which 13.02 lakh have the facility of tap water supply.

Mr. Sanjay Kumar Mohanty has recently taken over as the new member of the operational and business development of the Railway Board of the Ministry of Railways. He was the General Manager of South Eastern Railway before joining the post of Member of Railway Board. He has been a student at the Delhi School of Economics.

Directorate General of Foreign Trade has recently notified to allow the import of oxygen concentrator for personal use. Under which the Foreign Trade Policy, 2015-2020 has been revised to allow imports. The objective of the ongoing foreign trade policy is to double the foreign sales to 900 billion dollars.

The government of the United Kingdom has recently allowed the use of slow self-driving cars on motorways with which the country uses the use of self-driving cars Has become the first country in the world to regulate. The country’s Transport Ministry has said that this automated lane-keeping system will start with ALKS.

Pinarayi Vijayan, the Chief Minister of Kerala, has submitted his resignation letter to Governor Arif Mohammed Khan on May 03, 2021. He was serving as the 12th CM of Kerala since 25 May 2016.

The World Press Freedom Day is observed on May 3 annually to raise awareness of the importance of freedom of the press and remind governments of their duty to respect and uphold the right to freedom of expression.

India and Russia have decided to establish a new 2+2 dialogue at the foreign and defense minister level. To date, India has this mechanism with only QUAD member countries, which are United States, Japan, and Australia. Russia is the first non-Quad member country with which India will now have this mechanism.

Tavarna Rabi Sankar, the Executive Director at Reserve Bank of India (RBI) has been named as the fourth Deputy Governor of the central bank.
14. C

Lewis Hamilton (Mercedes-Great Britain) won the 2021 Portuguese Grand Prix, held on 2 May 2021 at the Algarve International Circuit in Portugal. This was the second win of the season for Hamilton and the 96th career victory.

Sri Lanka all-rounder and former captain Thisara Perera have announced his retirement from international cricket on May 03, 2021, ending his international career which spanned nearly 12 years.

World Laughter Day is observed every year on the first Sunday of May to raise awareness about laughter and its healing benefits. In 2021, the day falls on 02 May 2021.

The annual International Dawn Chorus Day is held on the First Sunday in May. In 2021, this day is being celebrated on 02 May 2021.

The International Firefighters’ Day (IFFD) is observed on May 4 every year since 1999, to recognize and honor the sacrifices that firefighters make to ensure that their communities and environment are as safe as possible.