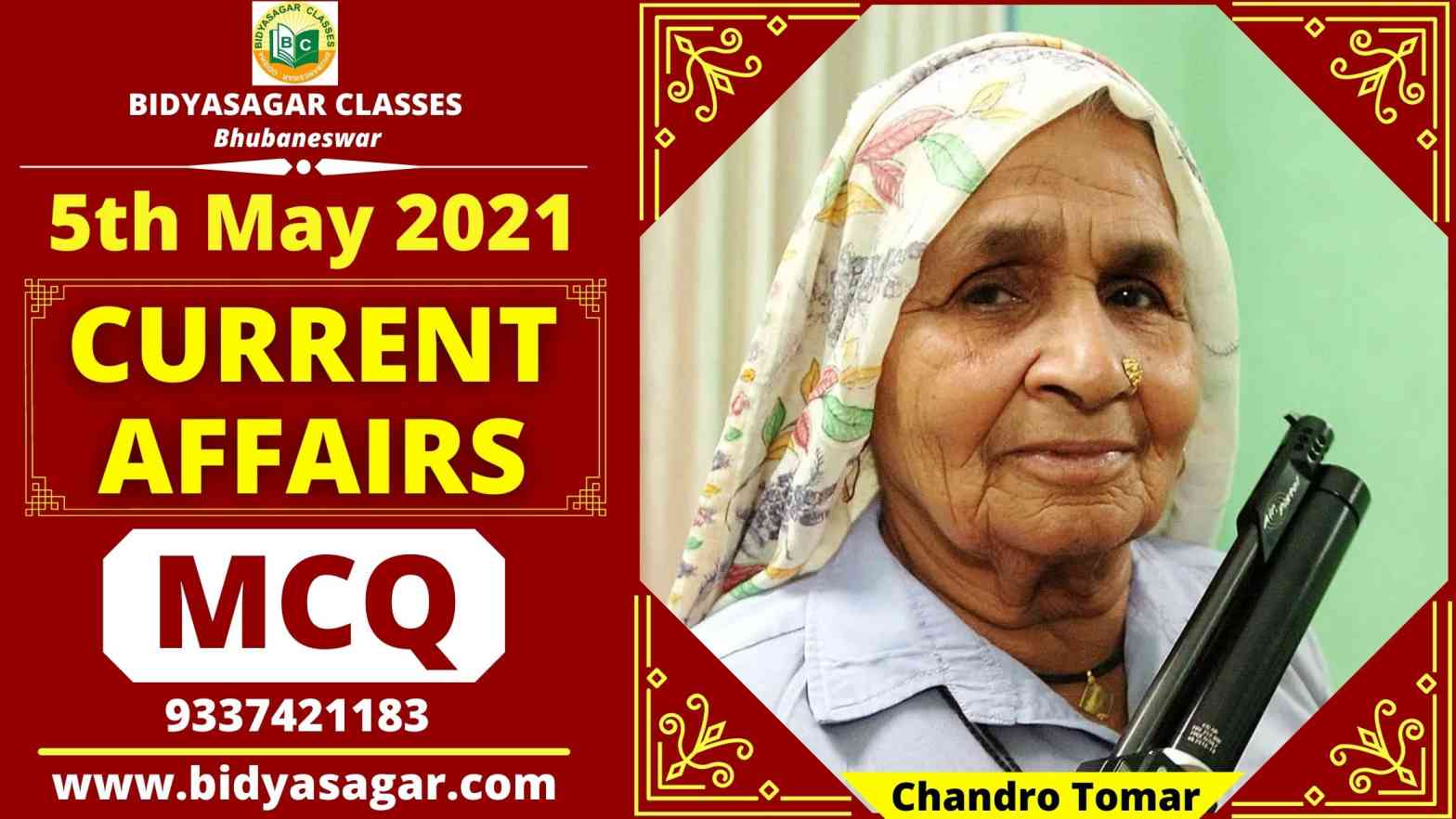 1.Which of the following company has recently offered $ 44.6 billion to buy Yahoo Inc.?

2. India and UK have recently agreed to double trade in how many years?

3. Recently which organization has given emergency use authority to the Moderna Corona vaccine?

4. How old is Jagmohan, the former governor of Jammu and Kashmir who recently passed away?

5. T. Ravi Shankar has been appointed as the Deputy Governor of Reserve Bank of India recently?

6. Who has recently announced the cancellation of IPL 2021 due to the rise in coronavirus cases?

7. Which of these cricket team’s former captain and all-rounder Thisara Perera has announced his retirement from international cricket?

8. Which of the following democratic republic has recently announced the end of the Ebola virus outbreak?

10. When is the World Asthma Day observed?

11. Chandro Tomar, who has recently passed away at the age of 89, was known as the world’s oldest player in which sports event?

12. PV Sindhu and Michelle Li have been nominated as the athlete ambassadors for the IOC’s ‘Believe in Sport’ campaign, by the Badminton World Federation (BWF). Michelle Li plays for which country?

13. Which day of the year is observed as the International Day of the Midwife?
A.  First Wednesday of May
B. 05 May
C.  First Tuesday of May
D.  04 May

15. The World Hand Hygiene Day is commemorated to raise awareness about the importance of hand hygiene in warding off many serious infections. When is the day observed?

16. Jagmohan Malhotra, who has passed away recently was the former Governor of which state?
A.  Jharkhand
B. Kerala
C. Jammu and Kashmir
D. Assam

18. RBI has imposed a penalty of how much amount on ICICI Bank for violating prudential norms in the matter of shifting of securities from one category to another?
A. Rs 3 crore
B. Rs 2 crore
C. Rs 5 crore
D. Rs 4 crore

20.Mark Selby has recently become the world champion for the fourth time. He is associated with which sports event?
A. Snooker
B. Badminton
C. Tennis
D. Chess

Explanation: Microsoft Corp recently offered $ 44.6 billion to buy Yahoo Inc., once the world’s number one search engine. Through this deal, both companies can pose a challenge for Google. At present, 500 million users come to Yahoo every month for news, finance, and sports.

Explanation: The Prime Minister of India and UK has recently agreed to double the trade in the coming 9 years at the virtual summit. Also, both countries have approved an ambitious roadmap for 2030. Which will strengthen the strategic partnership between the two countries.

Explanation: T. Ravi Shankar has recently taken over as the fourth Deputy Governor of Reserve Bank of India. He has been the chairman of Indian Financial Technology and Allied Services, a subsidiary of the central bank. His term will be 3 years. Before him, the post of deputy governor was held by deputy governors Michael D. Patra, Mukesh Kumar Jain, and Rajeshwar Rao.

Explanation: BCCI has recently announced the cancellation of IPL 2021, due to an increase in coronavirus cases. In this season of IPL, many players of Chennai Super Kings, Kolkata Knight Riders, Sunrisers Hyderabad, and Delhi Capitals teams have been corona infected. This tournament has been suspended indefinitely.

Explanation: This Srira Cricket team’s former captain and all-rounder Thisara Perera have recently announced his retirement from international cricket. He is known for fast bowling in T20 cricket and for batting in the last overs. They have said that they will continue to play franchise cricket.

Explanation: The Democratic Republic of Congo recently announced an end to the 12th outbreak of the Ebola virus. The virus infected 12 people in the eastern province of North Kivu, of which 6 people died. The virus was first discovered in the year 1976.

Explanation: Wall Street brokerage Goldman Sachs has cut the GDP growth rate estimate for the Indian economy to 11.1 percent in fiscal year FY22 (April 01, 2021, to March 31, 2022), due to increasing intensities of lockdowns by states to check the spread of coronavirus infections.

Explanation: Shooter Chandro Tomar, who was nicknamed ‘Shooter Dadi’, has passed away due to Covid-19 complication. She was 89.

Explanation: The Badminton World Federation (BWF) has nominated Indian shuttler PV Sindhu and Michelle Li of Canada as athlete ambassadors for the ‘Belief in Sport’ campaign, launched by the International Olympic Committee (IOC).

Explanation: Every year the, International Confederation of Midwives (ICM) celebrates the International Day of the Midwife on 5 May.

Explanation: Goldman Sachs has revised the 2021 Calendar Year growth forecast to 9.7 percent, from the previous estimate of 10.5 percent.

Explanation: Every year, the World Hand Hygiene Day is observed on May 5.The day is organised by the World Health Organization (WHO) to raise awareness among people across the globe about the importance of hand hygiene in warding off many serious infections.

Explanation: Mahesh Balasubramanian has been appointed as the Managing Director (MD) of Kotak Mahindra Life Insurance Company Limited (KLI). He has been appointed for a period of three years, following the retirement of G Murlidhar.

Explanation: The Reserve Bank of India (RBI) has imposed a monetary penalty of Rs. 3 crore on ICICI Bank Ltd. for non-compliance with certain RBI directions in the matter of shifting of securities from one category to another.

Explanation: In India, the Coal Miners Day is celebrated on May 4 every year, to recognize the hard work of some of the great unsung heroes of the Industrial Revolution.