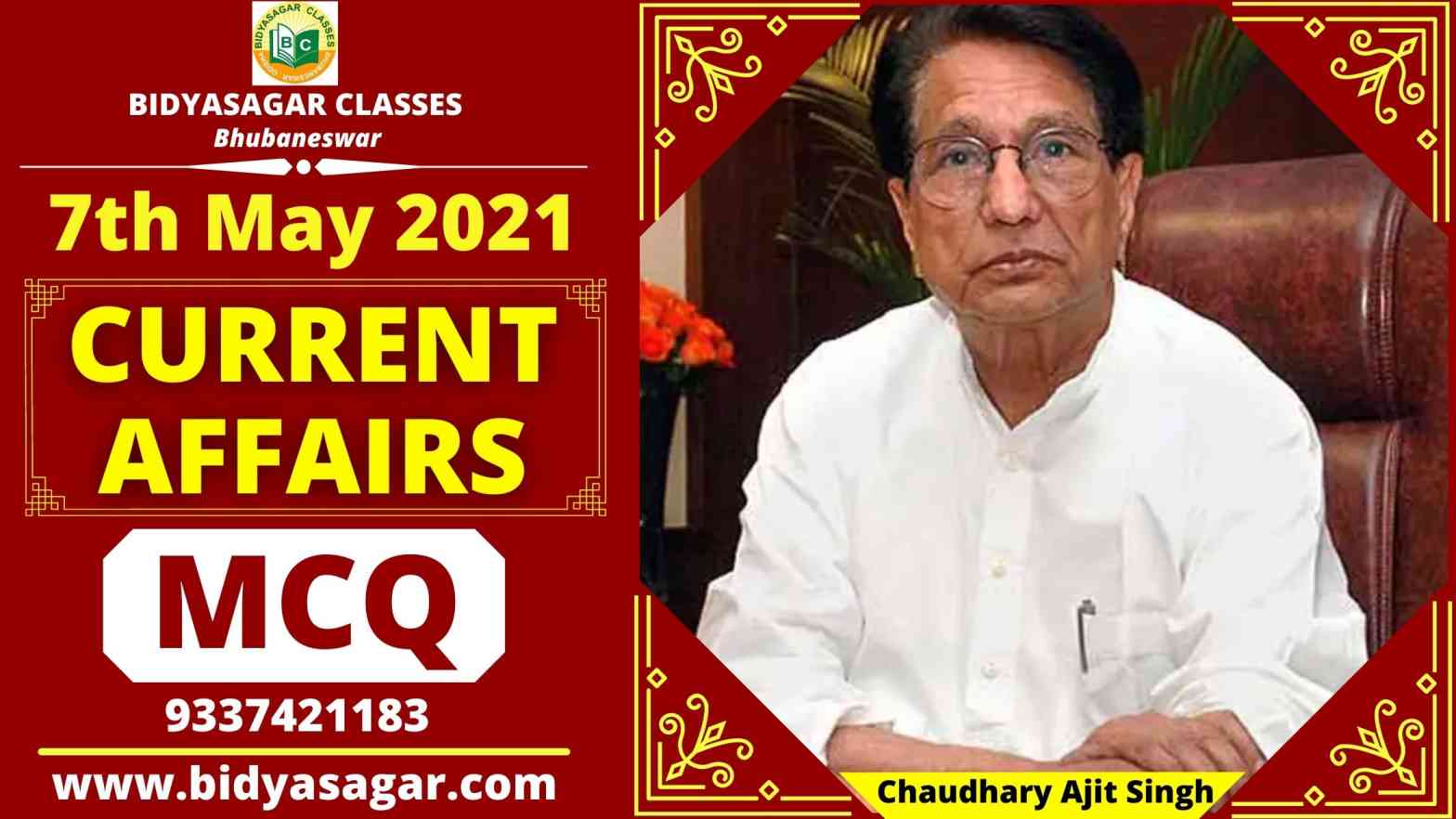 1. Canadian drug regulator Health has approved the world’s first corona vaccine for children made by which company?

2. Dravida Munnetra Kazhagam chief MK Stalin has recently been elected the chief minister of which state?

4. Which day is celebrated worldwide on May 7?

5. Which Ministry of the country has issued notification of Section 144 of the Social Security Code 2020?

A. Ministry of Information and Broadcasting

B. Ministry of Railways

6. Which of the following political party chief and former Union Minister Chaudhary Ajit Singh has passed away recently?

7. Which of these late actor’s photos has been included in the textbook of the Bengali school?

8. The Union Cabinet has approved a Memorandum of Understanding for migration and movement between India, the United Kingdom of Great Britain, and which country?

10. Bengaluru is placed at 40th position in the ‘Prime Global Cities Index Q1 2021’ report, which ranks global cities in terms of an increase in prime residential prices. The index is published by which entity?

11. Gopabandhu Sambadika Swasthya Bima Yojana has been launched by which state for the working journalists of the state?

12. When is World Athletics Day 2021 being observed by the IAAF?

13. Arouca Bridge is the world’s longest pedestrian suspension bridge. It has recently been inaugurated in which country?

14. Five of India’s top Oil and Gas PSUs have inked a Memoranda of Understanding (MOUs) for Construction and Redevelopment of which pilgrimage site as a Spiritual Smart hill Town?

15. Chaudhary Ajit Singh, who has passed away recently was the founder of which political party?

16. The first-ever India-France-Australia Trilateral Foreign Ministerial Dialogue was held recently in which city?

17. V Kalyanam, the veteran freedom fighter who has passed away recently, was the only surviving personal secretary of which Indian leader?

18. Which city has topped the ‘Prime Global Cities Index Q1 2021’ for registering the strongest growth in prime residential prices during January-March 2021?

20. Which state’s law on the regulation of real estate was struck down by the Supreme Court?

Canada’s drug regulator Health recently approved the world’s first corona vaccine for children aged 12 to 15, created by the Pfizer company. Pfizer claims that it has done vaccine trials on 2,260 children between the age of 12-15 years, which has proved to be completely effective.

World Athletics Day is celebrated worldwide on 7 May. The purpose of this day is to popularize sports among the youth and to promote athletics as the primary sport in schools, institutes of the country. The date of this day changes every year, which is determined by the IAAF.

The Union Ministry of Labor and Employment has recently issued notification of Section 144 of the Social Security Code 2020 covering the relevance of Aadhaar. Under which this ministry will be able to get the details of the Aadhaar of beneficiaries for its database under social security schemes.

Chaudhary Ajit Singh, the head of the Rashtriya Lok Dal Political Party and former Union Minister, has recently passed away at the age of 82 due to being infected with Corona. He also developed pneumonia due to infection spreading in his lungs. He is also known as the elder leader of Jats.

Photo of late Bollywood actor Sushant Singh Rajput has recently been included in the textbook of Bengali school. Her photo is taken from the serial “Pious Relationship”. His photo has been published by a primary Bangla book to explain the family and father figure.

The Union Cabinet has recently approved a Memorandum of Understanding for migration and movement between India, the United Kingdom of Great Britain, and Northern Ireland. The purpose of which is to liberalize the visa process between countries.

Arouca Bridge 516, the world’s longest pedestrian suspension bridge and was officially inaugurated on 02 May 2021 in northern Portugal.

The top Oil and Gas PSUs of India, including IndianOil, BPCL, HPCL, ONGC, and GAIL, have inked a Memoranda of Understanding (MOUs) with the Shri Badrinath Utthan Charitable Trust on May 06, 2021, for the Construction and Redevelopment of Shri Badrinath Dham in Uttarakhand as a Spiritual Smart hill Town. Under the MoUs, these PSUs will contribute Rs. 99.60 crore in the first phase of the project.

Former Union Minister and Rashtriya Lok Dal (RLD) founder and leader Ajit Singh have passed away battling COVID-19. He was 82. Singh was the son of former Prime Minister of India, Chaudhary Charan Singh.

Three Chinese cities, Shenzhen, Shanghai, and Guangzhou lead the index in Q1 of 2021, with Shenzhen registering the strongest growth of 18.9% in the price. New York, which is among the world’s top metropolises was the weakest performing market, ranked at 46th spot with negative 5.8% growth.

Life Insurance Corporation of India (LIC) has become the 3rd strongest insurance brand globally as per the London-based brand valuation consultancy firm. With this LIC has also secured itself as the 10th most valuable insurance brand in the world.