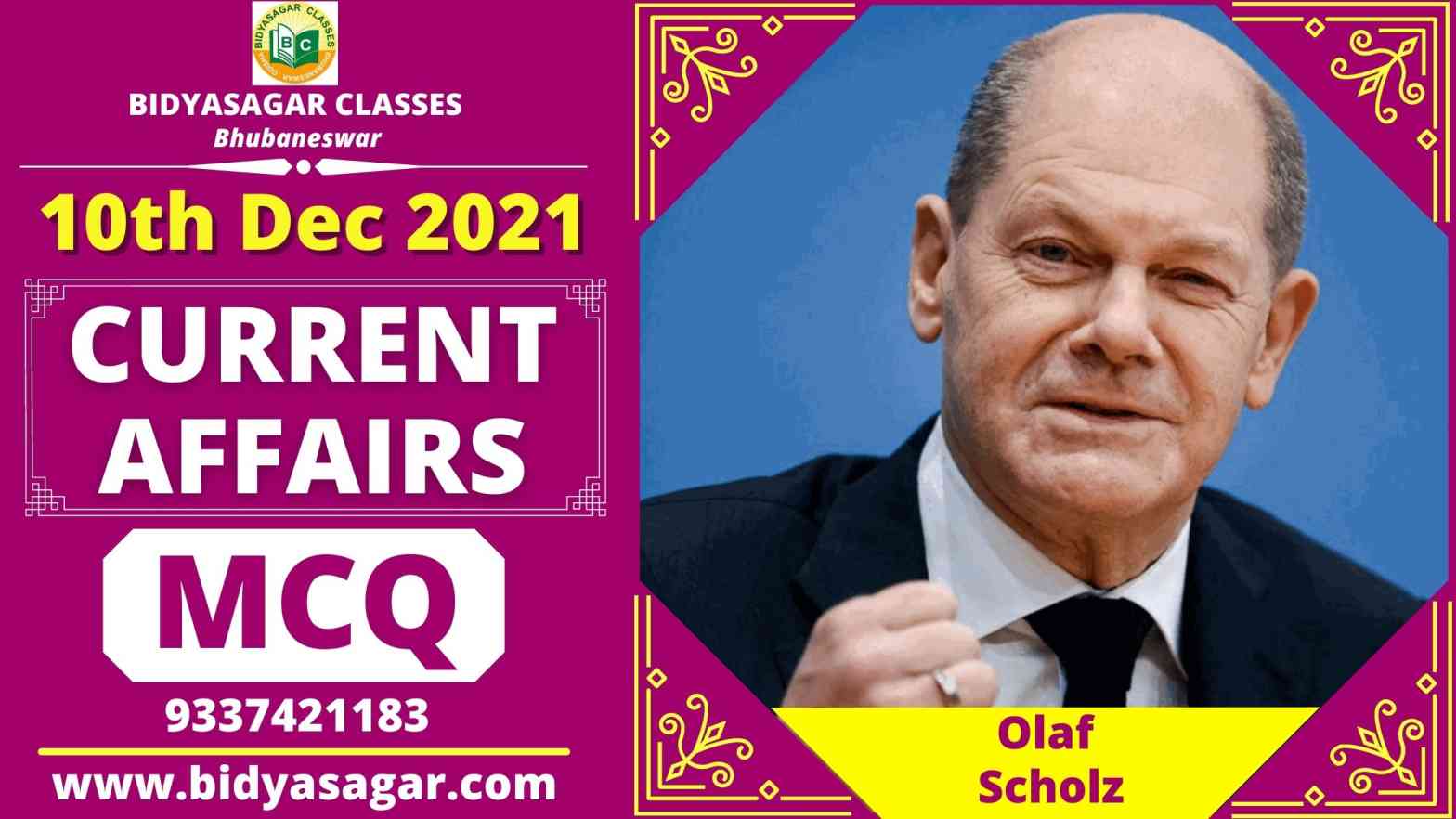 In this article, we will discuss MCQ on important current affairs of 10th December 2021 and their answers with explanations.

1. Kazhuveli wetland has been declared as the 16th Bird Sanctuary of which of the following state?
(a) Tamil Nadu
(b) Karnataka
(c) Andhra Pradesh
(d) Kerala
2. Which of the following has become the 1st certified tokenization service for NPCI Tokenization system (NTS) to support tokenization of RuPay cards?
(a) PayCore
(b) PayU
(c) PayPal
(d) PayPhi
3. RBI has recently imposed restrictions on which state’s Nagar Urban Co-operative Bank?
(a) Gujarat
(b) West Bengal
(c) Madhya Pradesh
(d) Maharashtra
4. Which Small Finance Bank has signed a partnership agreement with fintech firm, Indiagold to launch India’s first Loan against Digital Gold?
(a) ESAF Small Finance Bank
(b) Suryoday Small Finance Bank
(c) Utkarsh Small Finance Bank
(d) Shivalik Small Finance Bank
5. Name the Indian Shuttler who has won silver at BWF World Tour Finals 2021.
(a) Saina Nehwal
(b) PV Sindhu
(c) Sania Mirza
(d) N. Sikki Reddy
6. What is the theme of International Anti-Corruption Day 2021?
(a) RECOVER with INTEGRITY
(b) Your right, your role: say no to corruption
(c) United Against Corruption
(d) United against corruption for development, peace and security
7. Fitch Ratings has slashed India’s economic growth forecast in the financial year 2021-22 (FY22) to _________.
(a) 8.4 per cent
(b) 6.4 per cent
(c) 7.4 per cent
(d) 9.4 per cent
8. Name the Indian women, who ranked 37th on the Forbes’ list of the World’s 100 Most Powerful Women 2021?
(a) Falguni Nayar
(b) Nirmala Sitharaman
(c) Roshni Nadar Malhotra
(d) Kiran Mazumdar-Shaw
9. Ram Nath Kovind has presented the ‘President’s Standard’ to the ________ Missile Vessel Squadron of the Indian Navy.
(a) 25th
(b) 24th
(c) 23rd
(d) 22nd
10. What is the rank of India in the Lowy Institute Asia Power Index 2021?
(a) 1st
(b) 2nd
(c) 3rd
(d) 4th
11. Which institution has launched the “e-Sawaari India Electric Bus Coalition”?
(a) Institute of National Importance
(b) NITI Aayog
(c) Indian Institute of Tourism and Travel Management
(d) ISRO
12. German lawmakers officially elected Social Democrat, ________ as the new chancellor.
(a) Angela Merkel
(b) Britta Ernst
(c) Armin Laschet
(d) Olaf Scholz
13. What is the rank of India in the Asia Power Index 2021?
(a) First
(b) Second
(c) Third
(d) Fourth
14. World’s oldest Test cricketer Ilene Ashe has passed away recently.
(a) 80 Years
(b) 90 Years
(c) 100 Years
(d) 110 Years
15. The “Kazuveli Wetland” located in which state has been declared as the 16th Bird Sanctuary by Environment Forest and Climate Change Minister Surpiya Sahu?
(a) Kerala
(b) Gujarat
(c) Maharashtra
(d) Tamil Nadu
16. What is the rank of Finance Minister Nirmala Sitharaman in the 2021 list of the world’s 100 most powerful women released by Forbes?
(a) 27th place
(b) 37th place
(c) 47th place
(d) 57th place
17. The famous teacher of which state of India and Padma Shri awardee Nand Kishore Prusty has passed away recently?
(a) Odisha
(b) Maharashtra
(c) Delhi
(d) Jharkhand
18. Which day is celebrated around the world on 10th December?
(a) World Human Rights Day
(b) World Science Day
(c) World Education Day
(d) World Women’s Day

1. A
The Kazhuveli wetland situated in Villupuram district of Tamil Nadu has been declared as the 16th Bird Sanctuary by Surpiya Sahu, Environment and Forest Secretary, at the Minister of Environment Forest and Climate Change.
2. D
In this regard, PayPhi, Phi Commerce’s API (Application programming interface) first digital payments platform, became the first certified tokenization service for NTS supporting tokenization of RuPay cards.
3. D
The Reserve Bank of India imposed several restrictions on Nagar Urban Co-operative Bank Ltd, Ahmednagar, Maharashtra, including restriction on withdrawals upto Rs. 10,000 for
4. D
Shivalik Small Finance Bank (SSFB) signed a partnership agreement with fintech firm, Indiagold to launch India’s first Loan against Digital Gold.
5. B
Indian Shuttler PV Sindhu won Silver at BWF World Tour Finals 2021; Viktor Axelsen and An Se-young won gold.
6. B
The theme of International Anti-Corruption Day 2021: “Your right, your role: say no to corruption”.
7. A
Fitch Ratings has slashed India’s economic growth forecast in the financial year 2021-22 (FY22) to 8.4 per cent and raised the growth projection to 10.3 per cent for FY23.
8. B
Finance Minister(FM) of India, Nirmala Sitharaman has ranked 37th on the Forbes’ list of the World’s 100 Most Powerful Women 2021 or 18th Edition of Forbes’ list of the World’s 100 Most Powerful Women.
9. D
President of India, Ram Nath Kovind has presented the ‘President’s Standard’ to the 22nd Missile Vessel Squadron of the Indian Navy, which is also known as the Killer Squadron at the ceremonial parade held at the Naval Dockyard, Mumbai, Maharashtra.
10. D
According to Lowy Institute Asia Power Index 2021, India has ranked 4th most powerful country in the Asia-Pacific region for comprehensive power out of 26 countries, with an overall score of 37.7 out of 100.
11. B
The National Institution of Transforming India (NITI) Aayog launched the ‘e-Sawaari India Electric Bus Coalition’ in partnership with Convergence Energy Service Ltd (CESL) and World Resources Institute, India (WRI India) and with the support from Transformative Urban Mobility Initiative (TUMI).
12. D
German lawmakers officially elected Social Democrat, Olaf Scholz as the new chancellor, putting an end to 16 years of conservative rule under Angela Merkel.
13. D
India has been ranked fourth among 26 countries with an overall score of 37.7 out of 100 in the Lowy Institute Asia Power Index 2021. India’s overall score has decreased by 2 points as compared to 2020. India is one of the 18 countries in Asia that are trending downward in their overall score in 2021.
14. D
World’s oldest Test cricketer Ilene Ashe has recently passed away at the age of 110. The right-arm seamer made his cricket debut in 1937 against Australia. And in his career till 1949, he took 10 wickets in seven matches he played.
15. D
16th Bird Sanctuary has been declared under The sanctuary is located along the eastern coast of Tamil Nadu near the Bay of Bengal.
16. B
Finance Minister Nirmala Sitharaman has been ranked 37th in the list of world’s 100 most powerful women 2021 released by Forbes. She was ranked 41st in the list in the year 2020 and 34th in 2019. While India’s seventh woman Falguni Nair was ranked 88th in the list. Kamala Harris, the first woman to become Vice President of the United States and the first person of color, came in second.
17. A
Famous teacher from Odisha, India and Padma Shri awardee Nand Kishore Prusty has passed away recently. He was recently awarded the Padma Shri award for his contribution in the field of education. He is known for his selfless dedication towards eradicating illiteracy in Odisha.
18. A
World Human Rights Day is celebrated all over the world on 10th December. The foundation of this day was laid by understanding and feeling the pain of the people who were scorched by the horrors of World War I. The Human Rights Act came into force in India from September 28, 1993, on October 12, 1993, the government constituted the ‘National Human Rights Commission’.