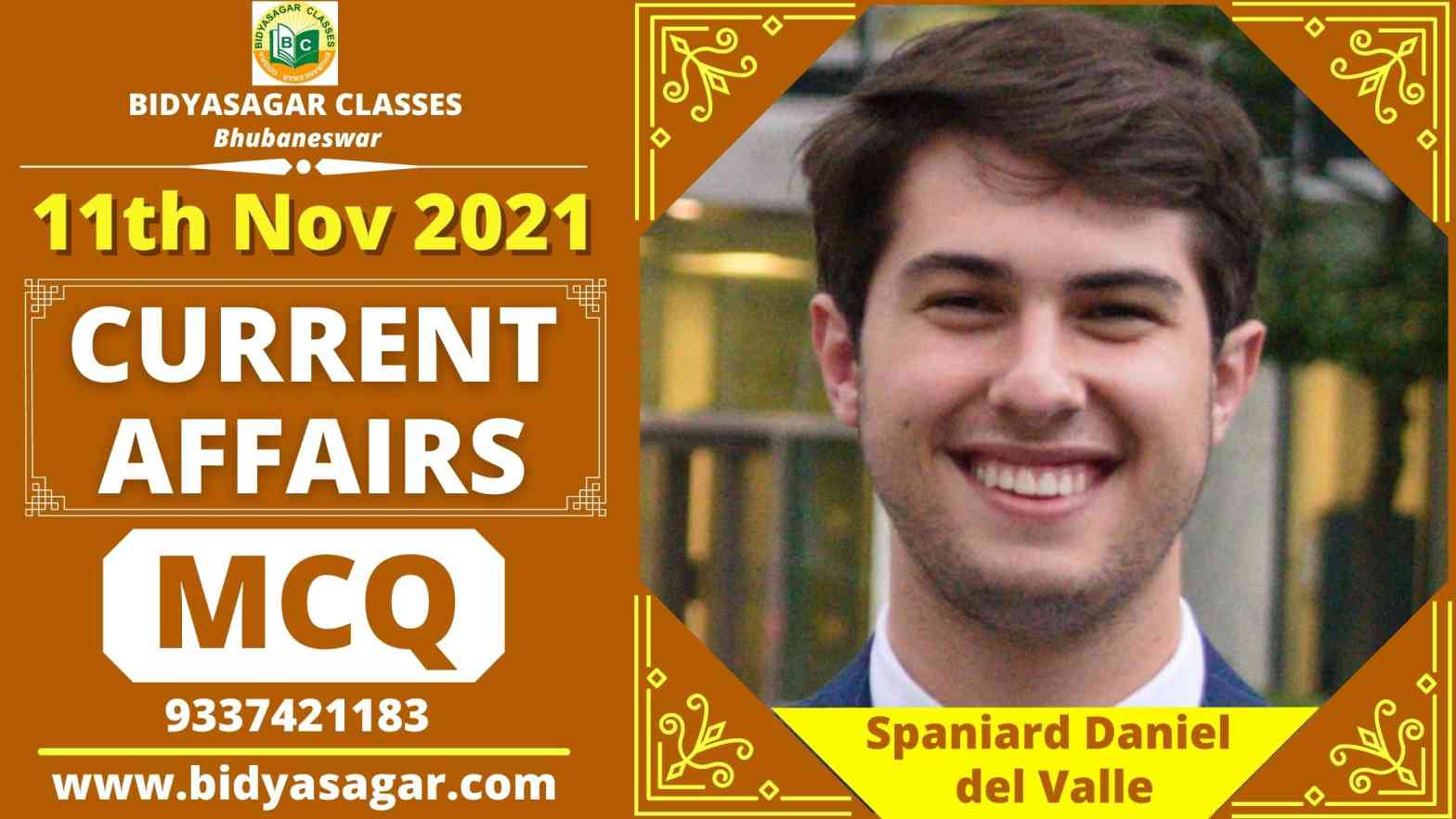 In this article, we will discuss MCQ on important current affairs of 11th November 2021 and their answers with explanations.

1. The Reserve Bank of India has launched its first global hackathon named ________.
(a) BANKING 2021
(b) BLOCKCHAIN 2021
(c) HARBINGER 2021
(d) LEGAL 2021
2. Which state became 1st Indian state to approve the ‘Tissue Culture Based Seed Potato Rules-2021’ to develop as a standard potato seed centre?
(a) Tamil Nadu
(b) Gujarat
(c) Karnataka
(d) Punjab
3. IBM Corporation has launched a client innovation centre in which of the following city?
(a) Aurangabad
(b) Bhopal
(c) Dehradun
(d) Mysuru
4. What was the rank of India out of 30 countries in the 1st edition of the Global Drug Policy Index?
(a) 11
(b) 18
(c) 25
(d) 27
5. Who has been re-elected as the President of International Gymnastics Federation?
(a) Penpa Tsering
(b) Morinari Watanabe
(c) Thierry Weil
(d) Gyanendro Ningombam
6. Who is the author of the new book titled “MODERN INDIA: For Civil Services and Other Competitive Examinations”?
(a) Amitav Ghosh
(b) Chidanand Rajghatta
(c) Poonam Dalal Dahiya
(d) Avtar Singh Bhasin
7. International Week of Science and Peace (IWOSP) is a global observance celebrated every year from __________.
(a) November 9 to 14
(b) November 8 to 13
(c) November 7 to 12
(d) November 6 to 11
8. Rohit Sharma has became the ______________ cricketer to score 3,000 runs in men’s T20Is.
(a) Third
(b) Second
(c) Fifth
(d) Fourth
9. Who has appointed the Spaniard Daniel del Valle as the High Representative for Youth?
(a) UNICEF
(b) UNESCO
(c) International Human Rights Foundation
(d) United Nations Commission on Human Rights
10. Junio has tied up with which of the following debit card issuer for pre-teens and teenagers?
(a) RuPay
(b) Mastercard
(c) Maestro
(d) Visa
11. Who among these has been awarded ICC Players of the Month for October?
(a) Devon Conway and Sophie Ecclestone
(b) Shakib Al Hasan and Stafanie Taylor
(c) Joe Root and Eimear Richardson
(d) Asif Ali amd Laura Delany
12. Which of the following state is the best-performing state in the National logistics index 2021?
(a) Karnataka
(b) Kerala
(c) Tripura
(d) Gujarat
13. Which of the following city selected UNESCO network of creative cities?
(a) Srinagar
(b) Bhopal
(c) Dehradun
(d) Imphal
14. _________ became the first Chinese woman astronaut to walk in space.
(a) Chyou Daiyu
(b) Ah Lam
(c) Wang Yaping
(d) Baozhai Chu Hua
15. The central government has recently appointed Vice Admiral R Hari Kumar as the next chief of which army?
(a) Air Force
(b) Indian Navy
(c) Army
(d) None of These
16. Indian Navy has recently got the fourth Scorpene submarine “Vela” under which project?
(a) Project 72
(b) Project 73
(c) Project 74
(d) Project 75
17. Who has been appointed as the captain of the Indian cricket team for the T20 series starting from November 17?
(a) KL Rahul
(b) Shikhar Dhawan
(c) Rohit Sharma
(d) Hardik Pandya
18. Which day is celebrated all over India on 11th November?
(a) National Post Day
(b) National Science Day
(c) National Education Day
(d) National Agreement Day

1. C
The Reserve Bank of India has launched its first global hackathon named “HARBINGER 2021 – Innovation for Transformation”. The theme of HARBINGER 2021 is ‘Smarter Digital Payments’.
2. D
Punjab Cabinet headed by chief minister Charanjit Singh Channi approved the ‘Punjab Tissue Culture Based Seed Potato Rules-2021’ to develop Punjab as a standard potato seed centre.
3. D
IBM Corp. launched a client innovation centre in Mysuru with support from the Karnataka Digital Economy Mission (KDEM).
4. B
India ranked 18 out of 30 countries in the 1st edition of the Global Drug Policy Index which was released by the Harm Reduction Consortium in November 2021.
5. B
Morinari Watanabe was re-elected as the President of International Gymnastics Federation or Fédération Internationale de Gymnastique (FIG) for a period of three years.
6. C
A new book titled “MODERN INDIA: For Civil Services and Other Competitive Examinations” by Poonam Dalal Dahiya.
7. A
International Week of Science and Peace (IWOSP) is a global observance celebrated every year from November 9 to 14.
8. A
Indian batter Rohit Sharma has completed 3000 T20I runs and became the third cricketer in the world to achieve this feat.
9. D
The International Human Rights Foundation (IHRF) has appointed the Spaniard Daniel del Valle as the High Representative for Youth due to his achievements in the thematic area of youth empowerment and youth participation for the United Nations.
10. A
Children-focussed fintech, Junio, has launched a smart multipurpose card for pre-teens and teenagers on the RuPay platform.
11. D
Pakistan’s Asif Ali and Ireland’s Laura Delany have been voted the ICC Players of the Month for October.
12. D
In the index, Gujarat, Haryana and Punjab were emerged as best performing states with respect to mobility of goods and efficiency of logistics chain.
13. A
Srinagar, the summer capital of Jammu and Kashmir, is among the 49 cities selected worldwide to join the UNESCO creative cities network (UCCN).
14. C
China had launched the Shenzhou-13 spaceship on October 16, sending three astronauts on a six-month mission to the under-construction space station which was expected to be ready by next year.
15. B
The Central Government has recently appointed Vice Admiral R Hari Kumar as the next Chief of the Indian Navy. He is currently the Flag Officer Commanding-in-Chief of the Western Naval Command. He will take over on 30 November following the retirement of the Navy Chief, Admiral Karambir.
16. D
Mazagon Dock Shipbuilders Limited has recently handed over the fourth Scorpene submarine “Vela” built under Project 75 to the Navy. Projet 75 includes 6 Scorpene class submarines. All these submarines are made in India.
17. C
Rohit Sharma has been appointed as the captain of the Indian cricket team for the T20 series starting from November 17. While KL Rahul has been made the vice-captain. Whereas from now onwards India’s coaching is going to be done by Rahul Dravid for the series against New Zealand.
18. C
National Education Day is celebrated all over India on 11th November. This day is celebrated in the memory of Maulana Abul Kalam Azad, India’s first Education Minister and Bharat Ratna awardee. Its statutory commencement was from 11 November 2008. While at the same time Maulana Abul Kalam Azad was born on 11 November 1888.