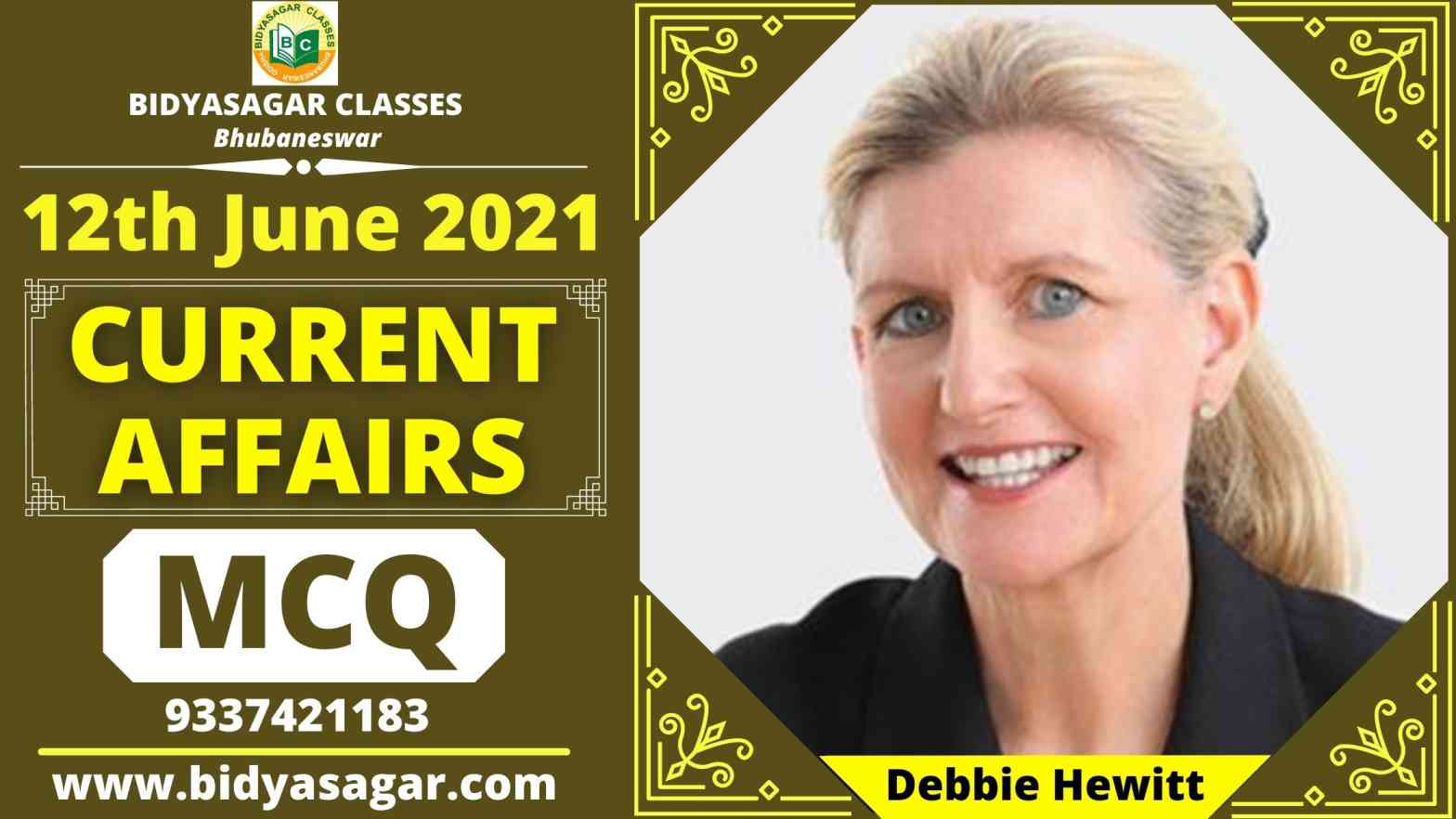 In this article, we will discuss MCQ on important current affairs of 12th June 2021 and their answers with explanations.

1.Which of the following city has topped the Global Liveability Index 2021, published by the Economist Intelligence Unit?

2. Ferrari has named Benedetto Vigna as its new company CEO. Ferrari is a luxury sports car manufacturer based in _______________.

4. Recently, Which of the following nation is engaged in the construction of its first fully stealth warship?

5. Who has been appointed as the first chairwoman of the Football Association?

6. What is the projected GDP growth rate of India as per ICRA in the financial year 2021-22?

8. Which of the following country has benefited the most in Bitcoin Investment Gain in 2020?

10. Who was conferred with the regional award as Asia Pacific Productivity Champion from Asian Productivity Organization?

11. Which of the following state recently launched the “Chief Minister Sishu Seva Scheme” for COVID-19 orphans?

15. Thales recently announced the appointment of _________ as Vice-President and Country Director for India.

16. Dr. Ashok Panagariya, the famous neurologist of the country and abroad and honored with which award has passed away recently?

17. Which state has secured the third position with a score of 57.1 in the national ranking of Anemia Free India Index 2020-21?

18. US President Joe Biden has announced the lifting of the ban on WeChat and which app

19. Which day is celebrated all over the world on 12th June?

A) World Day Against Child Labor

B) World No Tobacco Day

20. Who has recently released the “News on Air Radio Live Stream” ranking?

Auckland has been ranked the best on liveability rankings due to the ability of New Zealand city to contain Covid-19 faster.

Russia is building the first naval ship that will be fully equipped with stealth technology to make it hard to detect.

Indian actress Tillotama Shome has made the country proud by winning the Best Actor award at the 2021 UK Asian Film Festival (UKAFF). Tillotama won the award for her role in the film Raahgir: The Wayfarers.

The US traders have benefited the most in Bitcoin Investment Gain in 2020, with a profit of $4.1 billion, according to the latest report by Chainalysis, a blockchain analysis company based in Manhattan, New York.

Assam chief minister, Dr. Himanta Biswa Sarma has dedicated Chief Minister Sishu Seva Scheme to the service of the beneficiaries and handed over the cheques of financial assistance to few beneficiaries who lost both their parents due to COVID.

India has been ranked at 18th spot with a profit of $241 million, among the top 25 countries, in Bitcoin investment gains 2020.

French defense and aerospace group Thales announced the appointment of Ashish Saraf as Vice-President and Country Director for India with effect from June 1, 2021.

Dr. Ashok Panagariya, the famous neurologist of the country and abroad and the Padma Shri awardee in 2014, has passed away recently. He was battling the coronavirus and was on a ventilator for a long time. His health had worsened after taking the second dose of the vaccine. He has been given the Merit Award by the Government of Rajasthan in 1992.

Anemia Free India Index 2020-21, the state of Himachal Pradesh has secured the third position with a score of 57.1. Madhya Pradesh has got first place in the released national ranking.

World Day Against Child Labor is celebrated on 12 June all over the world. The purpose of celebrating this day is to spread awareness and protest against child labor. This day was started by the International Labor Union in 2002.

Recently Prasar Bharati Audience Research has released the “News on Air Radio Live Stream” ranking. More than 240 radio services of All India Radio are broadcast live on the “NewsOnAir App”. Which is the official app of Prasar Bharati.