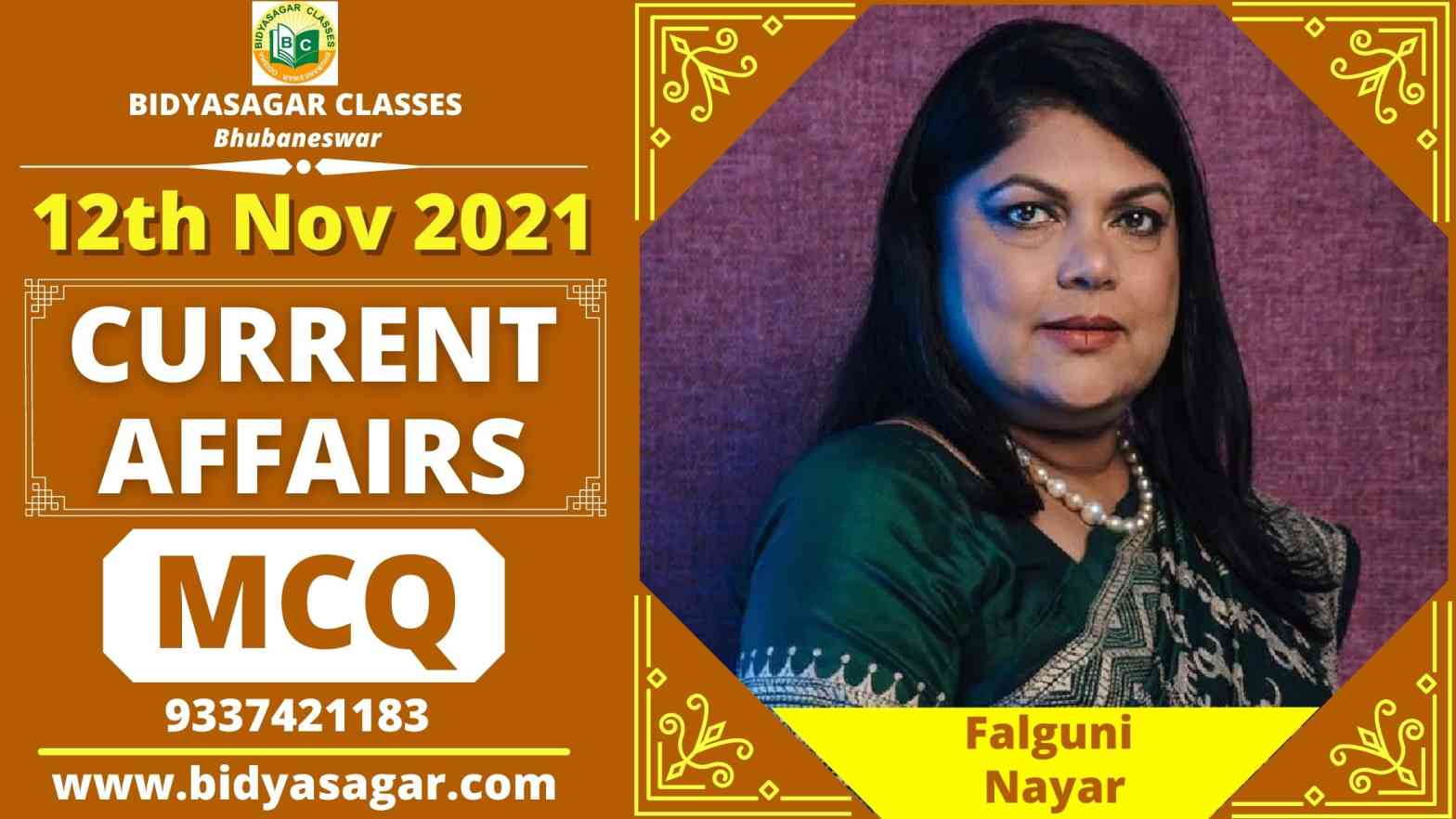 In this article, we will discuss MCQ on important current affairs of 12th November 2021 and their answers with explanations.

1. Where was the 51st Conference of Governors and Lieutenant Governors of Indian states and Union Territories held?
A) Mumbai
B) Delhi
C) Lucknow
D) Pune
2. Which state government has recently launched a road safety initiative named Rakshak, to train first responders of road accidents?
A) Maharashtra
B) Punjab
C) Odisha
D) West Bengal
3. The “Crew 3” mission has been launched by _______?
A) NASA and ISRO
B) RFSA and NASA
C) RFSA and SpaceX
D) NASA and SpaceX
4. Who amongst the following is the mission commander of “Crew 3” mission launched by NASA?
A) Raja Chari
B) Tom Marshburn
C) Kayla Barron
D) Matthias Maurer
5. Falguni Nayar is the MD and CEO of which of the following company?
A) Myntra
B) Nykaa
C) MyGlamm
D) KOOVS
6. Recently Falguni Nayar becomes India’s richest self-made woman after the IPO of FSN E-Commerce Ventures. What was the total issue size of IPO of FSN E-Commerce Ventures?
A) Rs 5,251.91 crore
B) Rs 5,351.92 crore
C) Rs 5,321.91 crore
D) Rs 5,231.92 crore
7. Rajeev Srivastava has been appointed as CEO of which bank?
A) Standard Chartered Securities
B) Citi Bank
C) Barclays Bank
D) HSBC Bank
8. Where was the India’s first Physical National Yogasana Championships organized?
A) Odisha
B) Maharashtra
C) Uttar Pradesh
D) Gujarat
9. Who has won the 2021 Rolex Paris Masters?
A) Daniil Medvedev
B) Alexander Zverev
C) Novak Djokovic
D) Rafael Nadal
10. Dwayne Bravo who has recently announced retirement from international cricket, represented which cricket team?
A) South Africa
B) England
C) Zimbabwe
D) West Indies
11. What was the theme of ‘Ayurveda Day’ 2021?
A) Ayurveda for Health
B) Ayurveda for Poshana
C) Ayurveda for Prosperity
D) Ayurveda for Development
12. When is the World Pneumonia Day observed?
A) November 08
B) November 13
C) November 12
D) November 10
13. When is the Public Service Broadcasting Day observed?
A) November 11
B) November 10
C) November 09
D) November 12
14. Public Service Broadcasting Day is observed to celebrate the visit of which of the following leader to the studio of All India Radio, Delhi in 1947?
A) Jawahar Lal Nehru
B) Lal Bahadur Shastri
C) Mahatma Gandhi
D) Subhash Chandra Bose
15. FW (Frederik Willem) de Klerk who passed away recently had received the Nobel prize in which field?
A) Physics
B) Medicine
C) Literature
D) Peace
16. US space agency NASA has extended the mission of sending astronauts to the Moon till which year?
A) 2023
B) 2024
C) 2025
D) 2026
17. The Legislative Assembly of which of the following state will host the 82nd Conference of Presiding Officers?
A) Kerala
B) Gujarat
C) Maharashtra
D) Himachal Pradesh
18. What is the rank of India in the Global Drug Policy Index released by the Harm Reduction Consortium?
A) 8th place
B) 18th place
C) 28th place
D) 30th place
19. Who among the following is set to organize the first global hackathon named “HARBINGER 2021 – Innovation for Transformation”?
A) Ministry of Finance
B) Reserve Bank of India
C) NITI Aayog
D) Planning Commission
20. Which day is celebrated all over India on 12th November?
A) National Tiger Day
B) National Animal Day
C) National Bird Day
D) National Animal Day

1. B
India’s President Shri Ram Nath Kovind addressed the 51st Conference of Governors and Lieutenant Governors at Rashtrapati Bhavan in New Delhi. It is the fourth conference to be presided over by President Ram Nath Kovind.
2. C
The state government of Odisha has launched a first of its kind road safety initiative named Rakshak, to train first responders of road accidents.
3. D
US Space agency NASA and the Elon Musk-owned private rocket company SpaceX have launched “Crew 3” mission on November 10, 2021
4. A
The “Crew 3” mission consists of Indian-origin NASA astronaut Raja Chari as its mission commander.
5. B
Falguni Nayar, the CEO and founder of beauty and fashion eCommerce platform Nykaa, has become the richest self-made woman in India. She founded Nykaa in the year 2012.
6. B
The issue size of IPO of FSN E-Commerce Ventures (Nykaa) was Rs 5,351.92 crore with facevalue of Rs 1 per share.
7. A
Rajeev Srivastava has been appointed as the chief executive officer (CEO) at Standard Chartered Securities for India operations.
8. A
India’s first Physical National Yogasana Championships has been organised in Bhubaneswar, Odisha from November 11-13, 2021.
9. C
In Tennis, Novak Djokovic defeated Daniil Medvedev 4-6, 6-3, 6-3 to win the 2021 Rolex Paris Masters final title on November 07, at Bercy.
10. D
West Indies allrounder Dwayne Bravo has announced retirement from international cricket on November 06, 2021.
11. B
In India, the ‘Ayurveda Day’ is observed every year on the occasion of Dhanwantari Jayanti (Dhanteras). Dhanvantari is the Hindu god of medicine. In 2021, India is observing the 6th National Ayurveda Day on 02 November 2021. The theme of the 2021 National Ayurveda Day is Ayurveda for Poshana (Nutrition).
12. C
The World Pneumonia Day is observed across the world on November 12 every year to raise awareness, promote prevention and treatment and produce action to combat the disease.
13. D
Public Service Broadcasting Day is celebrated every year on November 12
14. C
Public Service Broadcasting Day is celebrated every year on November 12 to commemorate the first and only visit of the Father of the Nation, Mahatma Gandhi, to the studio of All India Radio, Delhi in 1947.
15. D
FW (Frederik Willem) de Klerk, the former president of South Africa and the last white person to head the country, has passed away due to cancer. In 1993, De Klerk and Nelson Mandela jointly received the Nobel Peace Prize for their work towards ending apartheid.
16. C
The US space agency NASA has recently extended the mission of sending astronauts to the Moon from the year 2024 to 2025. NASA Administrator Bill Nielsen has made an announcement regarding the delay in the mission. NASA Administrator Bill Nelson has cited litigation with SpaceX over the Moon lander as the reason for the delay in the project.
17. D
The Himachal Pradesh Legislative Assembly will host the 82nd Conference of Presiding Officers at Shimla from November 16 to November 19, 2021. In which Lok Sabha Speaker Om Birla will also be present. Prime Minister Narendra Modi will also participate virtually in this conference and will address the participants on the day of inauguration.
18. B
India has been ranked 18th out of 30 countries in the Global Drug Policy Index released by the Harm Reduction Consortium. Whereas Norway, New Zealand, Portugal, the UK and Australia are the five leading countries in terms of humane and health-driven medicine policies. Overall India has got a score of 46/100.
19. B
Recently the Reserve Bank of India is all set to organize the first global hackathon named “HARBINGER 2021 – Innovation for Transformation” focusing on digital payments. Whose theme has been kept “Smarter Digital Payments”.
20. C
National Bird Day is celebrated all over India on 12 November. This day is celebrated on the birth anniversary of world famous bird expert Dr. Salim Ali. He had written many books related to birds, out of which ‘Birds of India’ is his most popular book.