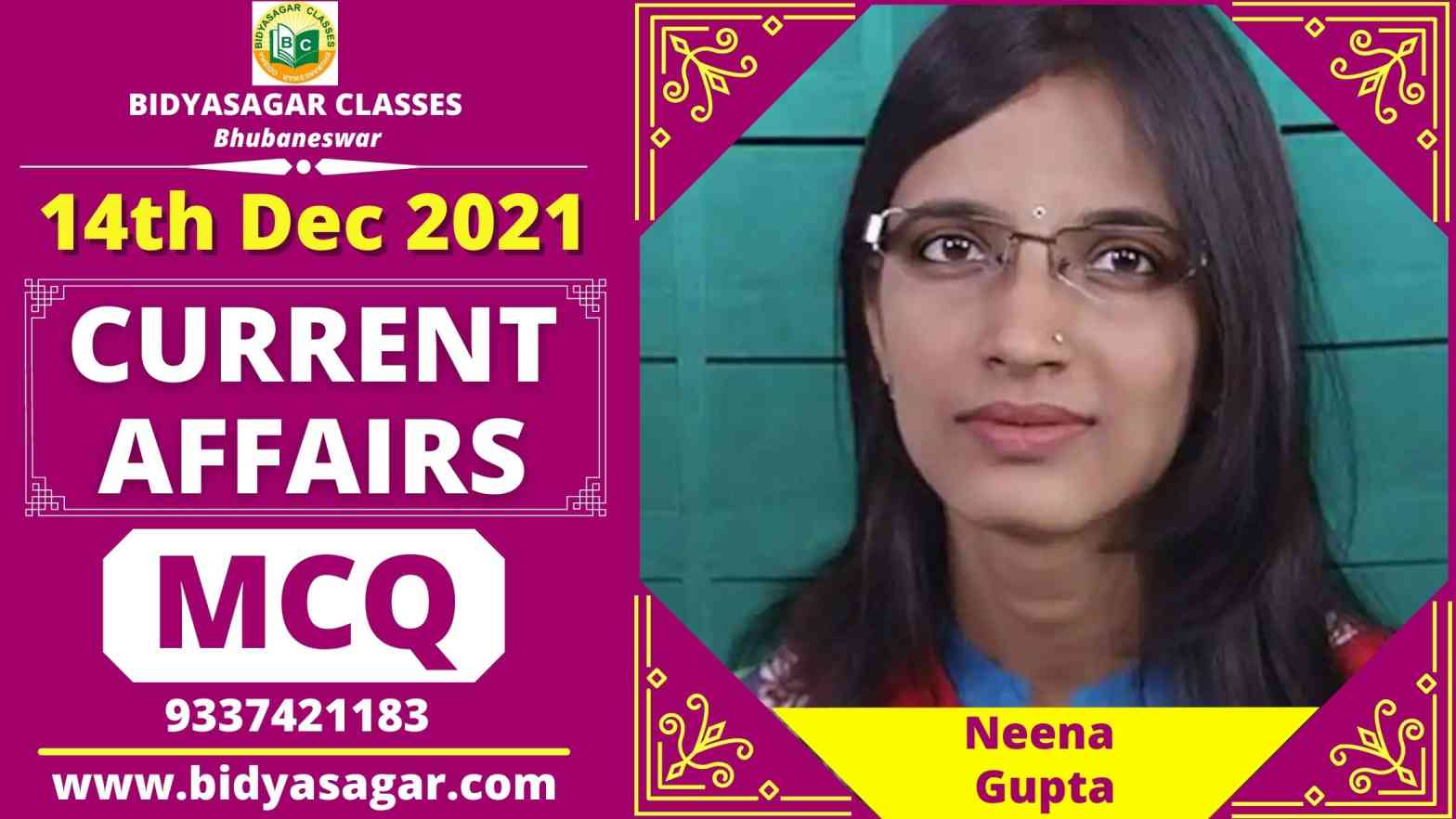 In this article, we will discuss MCQ on important current affairs of 13th December 2021 and their answers with explanations.

1. When is Geeta Jayanti observed?
A. December 12th
B. December 13th
C. December 14th
D. December 15th
2. When is PM Narendra Modi scheduled to address the National Summit on Agro and Food Processing?
A. December 14th
B. December 15th
C. December 16th
D. December 17th
3. India has launched the second edition of water innovation challenges with the Royal Embassy of which nation?
A. Sweden
B. Denmark
C. Switzerland
D. The Netherlands
4. Which cricketer has replaced injured Rohit Sharma in India’s test squad for South Africa tour?
A. Ravindra Jadeja
B. Ruturaj Gaikwad
C. Devdutt Padikkal
D. Priyank Panchal
5. When is National Energy Conservation Day observed?
A. December 11th
B. December 12th
C. December 13th
D. December 14th
6. Which among the following institutes has developed Bhu Parikshak device to detect soil health in 90 seconds?
A. IIT Madras
B. IIT Delhi
C. IIT Kanpur
D. IIT Bombay
7. An earthquake of 7.6 magnitude hit which nation on December 14, 2021?
A. Indonesia
B. Australia
C. Maldives
D. Malaysia
8. India has inducted how many athletes in the first list of TOPS Athletes for 2024 Paris Olympics?
A. 148
B. 150
C. 172
D. 134
9. Name the Indian Mathematician, who has been conferred with the 2021 DST-ICTP-IMU Ramanujan Prize recently?
A. Sanjit Mishra
B. Suman Verma
C. Neena Gupta
D. Sushimita Sehism
10. Which bank has been conferred with two DigiDhan Awards recently by the Union Ministry of Electronics and Information Technology?
A. State Bank Of India
B. Bank of Baroda
C. Yes Bank
D. Karnataka Bank
11. Prime Minister Narendra Modi has recently dedicated the Kashi Vishwanath Corridor to the nation, built at a total cost of about how many crores?
A. Rs 200 crore
B. Rs 500 crore
C. 900 crores
D. Rs 1500 crore
12. Name the Union Minister for Social Justice and Empowerment, who has recently launched the National Helpline Against Atrocity (NHAA) “14566”?
A. Dr. Virendra Kumar
B. Dr. Harsh Vardhan
C. Dr. Sanjay Kumar
D. Dr. Vijay Kumar
13. Which day is celebrated all over the world on 14th December?
A. International Tiger Day
B. International Elephant Day
C. International Environment Day
D. International Monkey Day
14. India’s Harnaaz Sandhu has won the Miss Universe title at the 70th Miss Universe 2021 held in Elliot, which of the following country?
A. Iraq
B. Israel
C. Iran
D. Japan

1. C
Geeta Jayanti 2021 was observed on December 14, 2021. Gita Mahotsav is an event centred around the Bhagavad Gita, when it is believed that the Bhagavad Gita was revealed to Arjuna by Krishna in the battlefield of Kurukshetra.
2. C
Prime Minister Narendra Modi will address National Summit on Agro and Food Processing on December 16, 2021. The summit will be organised as a part of Pre-event Vibrant Gujarat Summit to be held in Anand, Gujarat from December 14- 16, 2021.
3. B
NITI Aayog, Atal Innovation Mission and the Royal Embassy of Denmark to India together have launched the second edition of water innovation challenges on December 13, 2021 to address the global water woes as a part of the Indo-Danish Bilateral Green Strategic partnership. The water innovation challenges aim to identify innovative and next-gen solutions to solve proposed challenges in collaboration with corporate and public partners.
4. D
Priyank Panchal has replaced injured vice-captain Rohit Sharma in India’s Test squad for the South Africa tour. Priyank Panchal has been a regular performer in India’s domestic circuit. He has been the captain and top scorer for the Gujarat Ranji Trophy team for several years.
5. D
National Energy Conservation Day is observed across India on December 14, 2021 to raise awareness about the importance of energy conservation. The energy conservation day seeks to spread awareness about the importance of energy efficiency and conservation.
6. C
IIT Kanpur has developed a portable testing device called ‘Bhu Parikshak’ that can detect soil health in just 90 seconds through a mobile application. The technology has been transferred to a start-up.
7. A
An earthquake of 7.6 magnitude on the Richter scale struck 95km north of Maumere in Indonesia on December 14, 2021, informed United States Geological Survey (USGS). The earthquake reportedly struck its region of East Nusa Tenggara, according to the Reuters.
8. A
A total of 148 athletes, including 20 new inductees in seven Olympic disciplines and six Paralympic disciplines have been identified for support in the first list of Target Olympic Podium Scheme for 2024 Paris Olympics.
9. C
Indian Mathematician Neena Gupta recently awarded for her outstanding work in Affine Algebraic Geometry and Commutative Algebra, 2021 DST-ICTP for Young Mathematicians from Developing Countries -IMU has been honored with the Ramanujan Award. She is the third woman to be honored with this award.
10. D
Recently Karnataka Bank has been honored with two DigiDhan Awards recently by the Union Ministry of Electronics and Information Technology. Karnataka Bank has always been at the fore in adopting the latest digital technology for its products. The Chairman of Karnataka Bank Limited is Pradeep Kumar Panja and its headquarter is in Mangalore.
11. C
Prime Minister Narendra Modi has recently dedicated the Vishwanath Corridor to the nation, built at a cost of Rs 900 crore. Whose foundation stone was laid on 08 March 2019. Now Mother Ganga will also be seen present in Vishwanath Dham. This corridor has been built in about 1.5 lakh square feet. This grand corridor consists of 23 small buildings and 27 temples.
12. A
Union Minister for Social Justice and Empowerment, Dr. Virendra Kumar recently launched the National Helpline Against Atrocities on Scheduled Castes/Tribes (National Helpline Against Atrocities). (NHAA) “14566”) The number is available 24×7 in Hindi, English and regional languages of the States/UTs.
13. D
International Monkey Day is celebrated all over the world on 14th December. Programs and competitions are organized in many zoos across the world on this day. Whereas in some countries art performances are organized on Monkey Day to spread awareness. Although this day has not been officially declared by the UN, it is still celebrated in many countries.
14. B
Harnaz Sandhu of India has won the Miss Universe title at the 70th Miss Universe 2021 held in Eilat, Israel. Whereas earlier in 2000, Lara Dutta did this title in her name. 21-year-old Harnaaz Sandhu of Punjab defeated Nadia Ferreira of Paraguay and Lalela Maswane of South Africa to claim the crown.