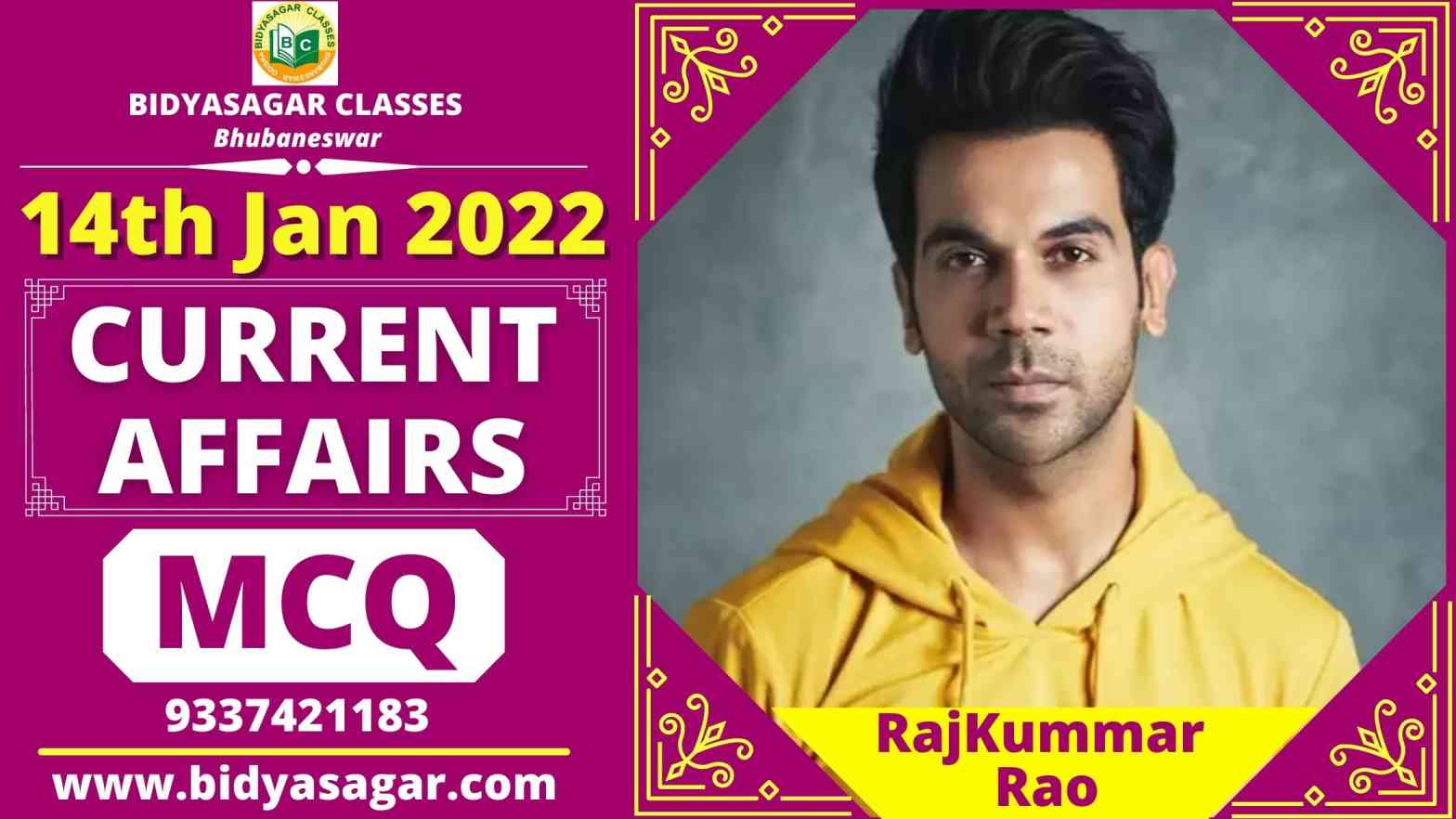 In this article, we will discuss MCQ on important current affairs of 14th January 2022 and their answers with explanations.

1. Recently, the oldest sloth bear of India passed away aged 40 at Van Vihar National Park and Zoo of Bhopal. What was the name of the bear?
(a) Babli
(b) Gulabo
(c) Pinki
(d) Sheebo
2. As per World Bank, what is the projected growth rate of Indian economy in current fiscal, FY22?
(a) 9.7%
(b) 8.0%
(c) 9.1%
(d) 8.3%
3. Alikhan Smailov has been appointed as the new Prime Minister of which country?
(a) Georgia
(b) Kazakhstan
(c) Tajikistan
(d) Armenia
4. What is the estimated GDP growth rate of India in FY22, as per the latest projection of UBS Securities?
(a) 10.1%
(b) 8.4%
(c) 9.1%
(d) 7.5%
5. DRDO undertook the final test firing of Man Portable Anti-Tank Guided Missile (MPATGM). Which agency has been designated for the manufacturing of this missile?
(a) Garden Reach Shipbuilders & Engineers
(b) Mazagon Dock Shipbuilders
(c) Hindustan Aeronautics Limited
(d) Bharat Dynamics Limited
6. What is the rank of India in Henley Passport Index, released for Q1 of 2022?
(a) 90
(b) 83
(c) 72
(d) 89
7. Which of these has been chosen as the title sponsor for Indian Premier League (IPL) 2022 and 2023 seasons by BCCI?
(a) Amazon
(b) Paytm
(c) Vivo
(d) Tata Group
8. Who has been appointed the brand ambassador of RenewBuy for its 1st 360-degree consumer advertisement campaign?
(a) Pankaj Tripathi
(b) Jasprit Bumrah
(c) Manoj Bajpayee
(d) Rajkummar Rao
9. “Indomitable: A Working Woman’s Notes on Life, Work and Leadership” is the autobiography of ____________________.
(a) Arundhati Bhattacharya
(b) Anita Desai
(c) Naureen Hassan
(d) Gowsalya Shankar
10. The Indian government will hold about _________ of the total outstanding shares of the Vodafone Idea.
(a) 55.8%
(b) 65.8%
(c) 75.8%
(d) 35.8%
11. Who has been appointed as new Indian Space Research Organisation chief?
(a) Kailasavadivoo Sivan
(b) Dr S Somanath
(c) Krishnaswamy Kasturirangan
(d) G.Madhavan Nair
12. Retail inflation of India in December 2021 rose to a six-month high of ______ per cent
(a) 6.59
(b) 7.59
(c) 8.59
(d) 5.59
13. Which of the following country has topped the Henley Passport Index 2022?
(a) America
(b) Japan
(c) China
(d) Germany
14. Who is named as the head of the five-member committee formed by Supreme Court to probe the security breach of PM security in Punjab?
(a) Indu Malhotra
(b) Uday Lalit
(c) Ranjan Gogoi
(d) N. V. Ramana
15. Who has become the first person in the world to get a heart transplant from a genetically-modified pig?
(a) Amelia Earhart
(b) John Edwards
(c) Bill Cosby
(d) David Bennett
16. The Railway Protection Force of which of the following railway zone has recently launched a new initiative “Mission Amanat” to track the lost luggage of railway passengers?
(a) Eastern Railway Zone
(b) Western Railway Zone
(c) Northern Railway Zone
(d) Southern Railway Zone
17. Haryana Deputy CM Dushyant Chautala has announced to set up India’s first heli-hub in which city?
(a) Karnal
(b) Gurugram
(c) Rohtak
(d) Ambala
18. Which edition of North East Festival has recently concluded in Guwahati, Assam?
(a) 5th Edition
(b) 7th Edition
(c) 8th Edition
(d) 9th Edition
19. DRDO has recently test-fired the sea-to-sea version of which missile?
(a) AGNI
(b) PRITHVI
(c) Dhurve
(d) BrahMos
20. Which of the following space agency has recently successfully test-fired the cryogenic engine for the Gaganyaan manned space programme?
(a) ISRO
(b) DRDO
(c) NASA
(d) Roscosmos

1. B
India’s oldest sloth bear, whose name was Gulabo, has passed away at the Van Vihar National Park and Zoo, located in Bhopal, Madhya Pradesh.
2. D
The World Bank retained its FY22 growth forecast for India at 8.3 per cent but upgraded it to 8.7 per cent for FY23.
3. B
The parliament of Kazakhstan has unanimously approved the appointment of Alikhan Smailov as the new Prime Minister of the country. Smailov’s name was nominated by Kazakh President Kassym-Jomart Tokayev on January 11, 2022.
4. C
Swiss brokerage UBS Securities has lowered the growth forecast of the Indian economy for the current financial year (FY22) to 9.1 per cent due to a massive surge in Omicron infections.
5. D
MPATGM will be manufactured by Bharat Dynamics Limited at its facility in Bhanoor, Telangana.
6. B
India has improved its position by seven places to rank at 83rd place among 111 countries in the latest Henley Passport Index, released for Q1 of 2022.
7. D
The Board of Control for Cricket in India (BCCI) has informed that Tata group has replaced Chinese mobile phone manufacturer Vivo as the title sponsor of the Indian Premier League (IPL) for 2022 and 2023 seasons. The multinational conglomerate will pay Rs. 300 crore per year as the title sponsor of IPL for the next two seasons.
8. D
RenewBuy, an online insurance platform, has appointed RajKummar Rao as the brand ambassador for its 1st 360-degree consumer advertisement campaign that highlights consumer’s insurance needs.
9. A
HarperCollins is set to publish “Indomitable: A Working Woman’s Notes on Life, Work and Leadership” the autobiography of Arundhati Bhattacharya, retired Indian banker and former first-ever woman Chairperson of the State Bank of India.
10. D
The Net Present Value (NPV) of this interest is expected to be about ?16,000 crore. The Indian government will hold about 35.8% of the total outstanding shares of the company, and the promoter shareholders Vodafone Group would hold around 28.5% and Aditya Birla Group around 17.8%.
11. B
Indian Space Research Organisation (ISRO) has announced the appointment of the eminent rocket scientist Dr S Somanath as its new chairman and Space Secretary. He will succeed Kailasavadivoo Sivan who completes his extended tenure.
12. D
Retail inflation in December 2021 rose to a six-month high of 5.59 per cent from 4.91 per cent in November 2021, mainly due to a sharp rise in food prices as food inflation for the period under review also rose steeply to 4.05 per cent against 1.87 per cent in November 2021.
13. B
Japan and Singapore have been ranked 1st, with passport holders have accessibility of 192 destinations visa-free.
14. A
The Supreme Court has constituted a five-member committee to probe the security breach during the recent visit of Prime Minister Narendra Modi to Punjab. The committee will be headed by former apex court judge Justice Indu Malhotra.
15. D
A US man has become the first person in the world to get a heart transplant from a genetically-modified pig. David Bennett, 57, is doing well three days after the experimental seven-hour procedure in Baltimore.
16. B
Railway Protection Force of Western Railway zone recently started a new initiative “Mission Amanat” to track the lost luggage of railway passengers. is of. Under which the details of lost luggage and luggage along with photo will be uploaded on the official website of Zonal Railway.
17. B
Haryana’s Deputy CM Dushyant Chautala has announced to set up India’s first heli-hub in Gurugram and Gurgaon. Which is designed for many aviation facilities like heliport, hangar, repair and other related services. This is the first such heli-hub in the country where all the facilities for helicopters will be at one place.
18. D
The 9th edition of the North East Festival has recently concluded in Guwahati, Assam. It aims to promote and highlight the commercial and tourism potential of the North East region. The festival was organized as a carnival with live music and dance performances.
19. D
Defense Research Development Organization (DRDO) has recently test-fired the sea-to-sea version of the BrahMos missile. It has been tested from INS Visakhapatnam. This test confirmed the preparedness of the Indian Navy. BrahMos was developed jointly by India and Russia.
20. A
ISRO has recently successfully tested the cryogenic engine for the Gaganyaan manned space program. The test took place at ISRO’s Propulsion Complex at Mahendragiri in Tamil Nadu for a duration of 720 seconds. Gaganyaan is the country’s first ambitious manned space mission.