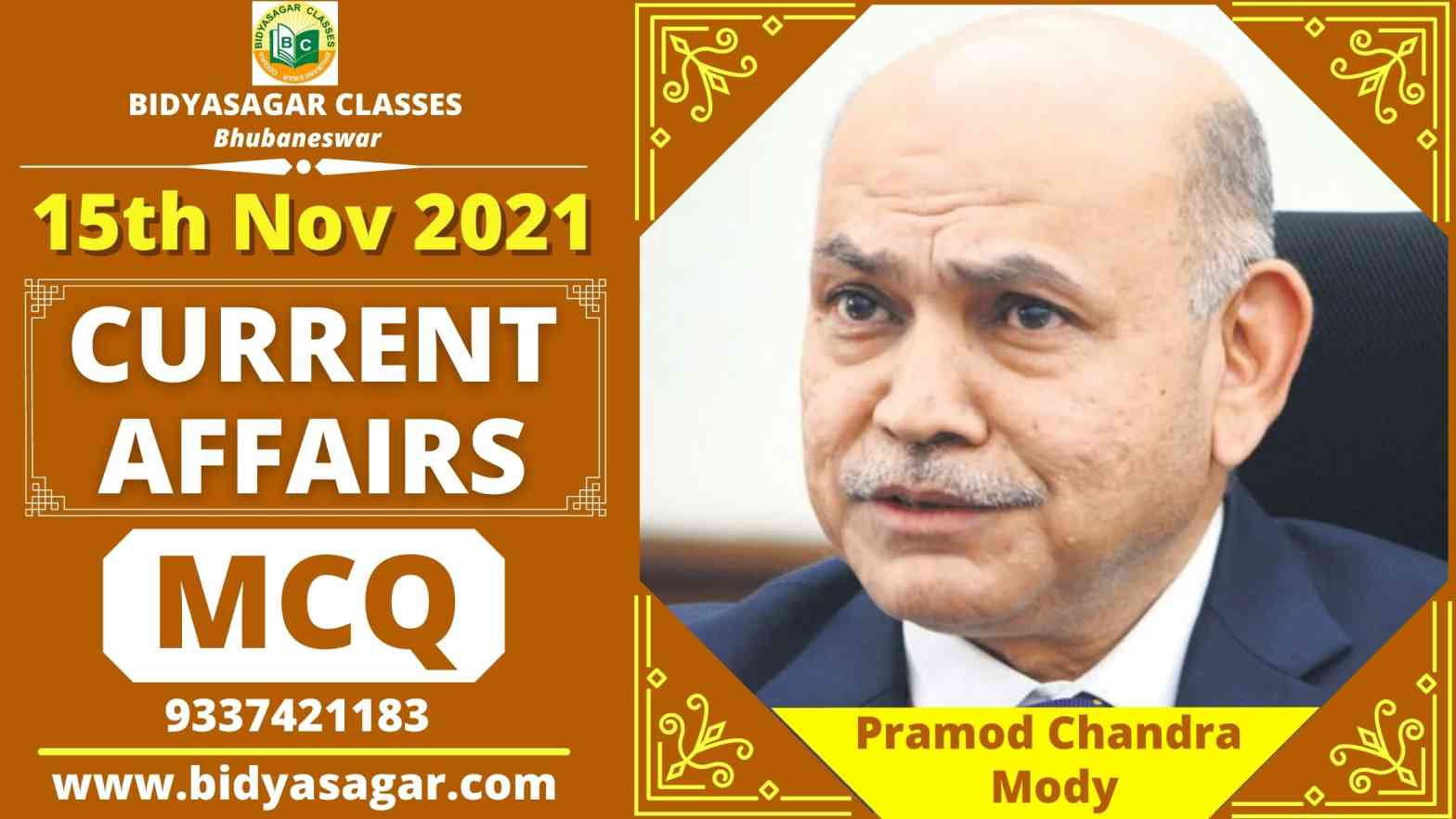 In this article, we will discuss MCQ on important current affairs of 15th November 2021 and their answers with explanations.

1. Government of India has promulgated two ordinances to extend the tenure of the Directors of Enforcement Directorate (ED) and Central Bureau of Investigation (CBI) from the present 2 years to _________ years
A) 5 years
B) 4 years
C) 3 years
D) 6 years
2. The Habibganj railway station has been renamed as Rani Kamlapati Railway Station. In which city is this railway station located?
A) Kanpur
B) Chennai
C) Bhopal
D) Ahmedabad
3. The Habibganj railway station has been renamed as Rani Kamlapati Railway Station. In which city is this railway station located?
A) Kanpur
B) Chennai
C) Bhopal
D) Ahmedabad
4. Defence Minister Rajnath Singh has recently inaugurated the first operationalised private sector defence manufacturing facility in which state?
A) Maharashtra
B) Madhya Pradesh
C) Gujarat
D) Uttar Pradesh
5. Which edition of the India-Thailand Coordinated Patrol (Indo-Thai CORPAT) was conducted in November 2021 in Andaman Sea?
A) 34th
B) 32nd
C) 30th
D) 38th
6. Who has been appointed as the new secretary general of Rajya Sabha to replace P.P.K. Ramacharyulu?
A) Pramod Chandra Mody
B) J.B. Mohapatra
C) Nitin Gupta
D) Rajiv Gauba
7. Who is the author of the book titled ‘FORCE IN STATECRAFT’?
A) Alok Shrivastava and Taruna Singh
B) VS Rathore and Dillip Kumar Rout
C) Ajay Kumar and Arjun Subramaniam
D) Raj Kamal Arya and Siddharth Sharma
8. Name the writer of the book titled “UNSHACKLING INDIA : Hard Truths and Clear Choices for Economic Revival”
A) Jagdish Bhagwati and Vijay Kelkar
B) Ajay Chhibber and Salman Anees Soz
C) Surjit Bhalla and Bina Agarwal
D) Jayati Ghosh and Rohini Pande
9. Which two country will play in the first match at the Women’s cricket T20 tournament while making debut at the 2022 Commonwealth Games?
A) Australia and Pakistan
B) Pakistan and New Zealand
C) India and Pakistan
D) India and Australia
10. Anand Shankar Pandya who has passed away recently was the former Vice President of which organisation?
A) Akhil Bharatiya Akhara Parishad
B) Vishwa Hindu Parishad
C) Hindu Yuva Vahini
D) Bharatiya Mazdoor Sangh
11. Which Indian state will jointly host the pioneering technopreneurship series Start-up Mission and Cisco Launchpad Accelerator Program?
A) Gujarat
B) Maharashtra
C) Kerala
D) Delhi
12. Which of the following bank has appointed actor Zubin Garg as its new brand ambassador for Assam?
A) Canara Bank
B) Bandhan Bank
C) Yes Bank
D) PNB Bank
13. Name the Union Minister of Law and Justice, who has recently launched Tele-law mobile app for citizens?
A) Mrs. Nirmala Sitharaman
B) Mr. Rajnath Singh
C) Shri Hardeep Singh Puri
D) Mr. Kiren Rijiju
14. Which of the following ministry has launched an awareness campaign on the Safai Mitra security challenge?
A) Ministry of Tribals
B) Ministry of Education
C) Ministry of Sports
D) Ministry of Housing and Urban Affairs
15. Name the Defense Secretary, who has recently released the book titled “Force in Statecraft” at NDC?
A) Dr. Sanjay Kumar
B) Dr. Sanjit Mehta
C) Dr. Ajay Singh
D) Dr. Ajay Kumar
16. The formation day of which of these Indian states is celebrated on 15th November?
A) Kerala State Formation Day
B) Punjab State Formation Day
C) Gujarat State Formation Day
D) Jharkhand State Formation Day
17. In which of the following state the pneumococcal conjugate vaccine program was started?
A) Kerala
B) Gujarat
C) Karnataka
D) Tamil Nadu
18. The Chief Minister of which of the following state Charanjit Singh Channi has made Punjabi language compulsory for all students in schools?
A) Pune
B) Haryana
C) Gujarat
D) Punjab

1. A
On November 14, 2021, the central government of India promulgated two ordinances for extending the tenure of Directors of the Enforcement Directorate (ED) and Central Bureau of Investigation (CBI) for up to five years.
2. B
The Hindu pilgrimage site Bhadrachalam in Telangana has been added as one of the destinations in the Ramayana Circuit of the Pilgrim Special Train of IRCTC.
3. C
The Habibganj railway station in Bhopal, Madhya Pradesh has been renamed after 18th-century Gond Queen of Bhopal, Rani Kamlapati. Prime Minister Shri Narendra Modi will inaugurate the revamped Rani Kamlapati railway station on November 15, during his visit to Bhopal.
4. D
Raksha Mantri Shri Rajnath Singh inaugurated the first operationalised private sector defence manufacturing facility in Uttar Pradesh Defence Industrial Corridor (UPDIC) in Lucknow on November 13, 2021.The facility will be run by Aerolloy Technologies, a wholly owned subsidiary of PTC Industries Limited.
5. B
The 32nd edition of India-Thailand Coordinated Patrol (Indo-Thai CORPAT) was conducted from November 12 to 14, 2021 in the Andaman Sea.
6. A
Pramod Chandra Mody has been appointed as the new secretary general of Rajya Sabha.Mr Modi is a 1982-batch retired IRS officer and former chairman of the Central Board of Direct Taxes (CBDT).He replaces P.P.K. Ramacharyulu, who was appointed to the post on September 01, 2021.
7. C
India’s Defence Secretary Dr Ajay Kumar released a book titled ‘FORCE IN STATECRAFT’ on November 13, 2021 in New Delhi. It has been compiled by Commandant of National Defence College (NDC) Air Marshal Diptendu Choudhury and President’s Chair of Excellence at NDC Air Vice Marshal (Dr) Arjun Subramaniam (Retd).
8. B
A new book on Indian economy titled “UNSHACKLING INDIA : Hard Truths and Clear Choices for Economic Revival” is set to be released on November 29, 2021. The book has been authored by Ajay Chhibber and Salman Anees Soz.
9. D
The Women’s cricket tournament will be making its debut at the 2022 Commonwealth Games in Birmingham, England. The opening match on the schedule will be between Australia and India at the Edgbaston Stadium on July 29.
10. B
Former Vice President of Vishwa Hindu Parishad (VHP), Anand Shankar Pandya, has passed away.He was over 99 years old.
11. C
India’s Kerala State Start-up Mission and Cisco Launchpad Accelerator Program will jointly host the Leading Technopreneurship Series. This program will take place from November 15, 2021 to November 19, 2021. This initiative will provide a platform for innovation and collaboration.
12. B
Popular in Assam Assamese and Bollywood singer Zubin Garg has recently been appointed as its new brand ambassador for Assam by Bandhan Bank. This association is a milestone for Bandhan Bank as it is the first time that the bank has associated with a brand ambassador since its inception six years ago.
13. D
Union Minister of Law and Justice Shri Kiren Rijiju has recently launched Tele-Law Mobile App for the citizens and also honored the Tele-law frontline functionaries. . He has said in his message that the development of New India has been done by the Prime Minister’s vision of Digital India. Telelaw, an e-interface platform, has been developed under the Digital India Scheme.
14. D
Ministry of Housing and Urban Affairs has recently started an awareness campaign on the Safai Mitra Security Challenge. 246 cities from across the country are participating in this challenge. Call center and helpline number ‘14420’ is functional in 345 cities for safe cleaning of septic tanks/sewers.
15. D
Defense Secretary Dr. Ajay Kumar has recently released a book titled “Force in Statecraft” at National Defense College in New Delhi. This book is a compilation of essays on topics like Anti-Terrorist Operations, Conflict in Northeast, Air Power, Nuclear Situation.
16. D
Jharkhand State Formation Day is celebrated on 15th November. Because on this day the tribal freedom revolutionary Birsa Munda of our country was born. Birsa Munda was a resident of Jharkhand.
17. C
Pneumococcal conjugate vaccine program started in Karnataka state of India. This program was launched under the Universal Immunization Program on the occasion of World Pneumonia Day. It aims to reduce pneumonia-induced mortality and morbidity in children.
18. D
Punjab Chief Minister Charanjit Singh Channi has recently made Punjabi language compulsory for all students in schools. Punjabi language will be made compulsory from class 1-10. Also, it will be made mandatory in offices as well. If any school violates this, then it will be fined up to Rs 2 lakh for violating it.