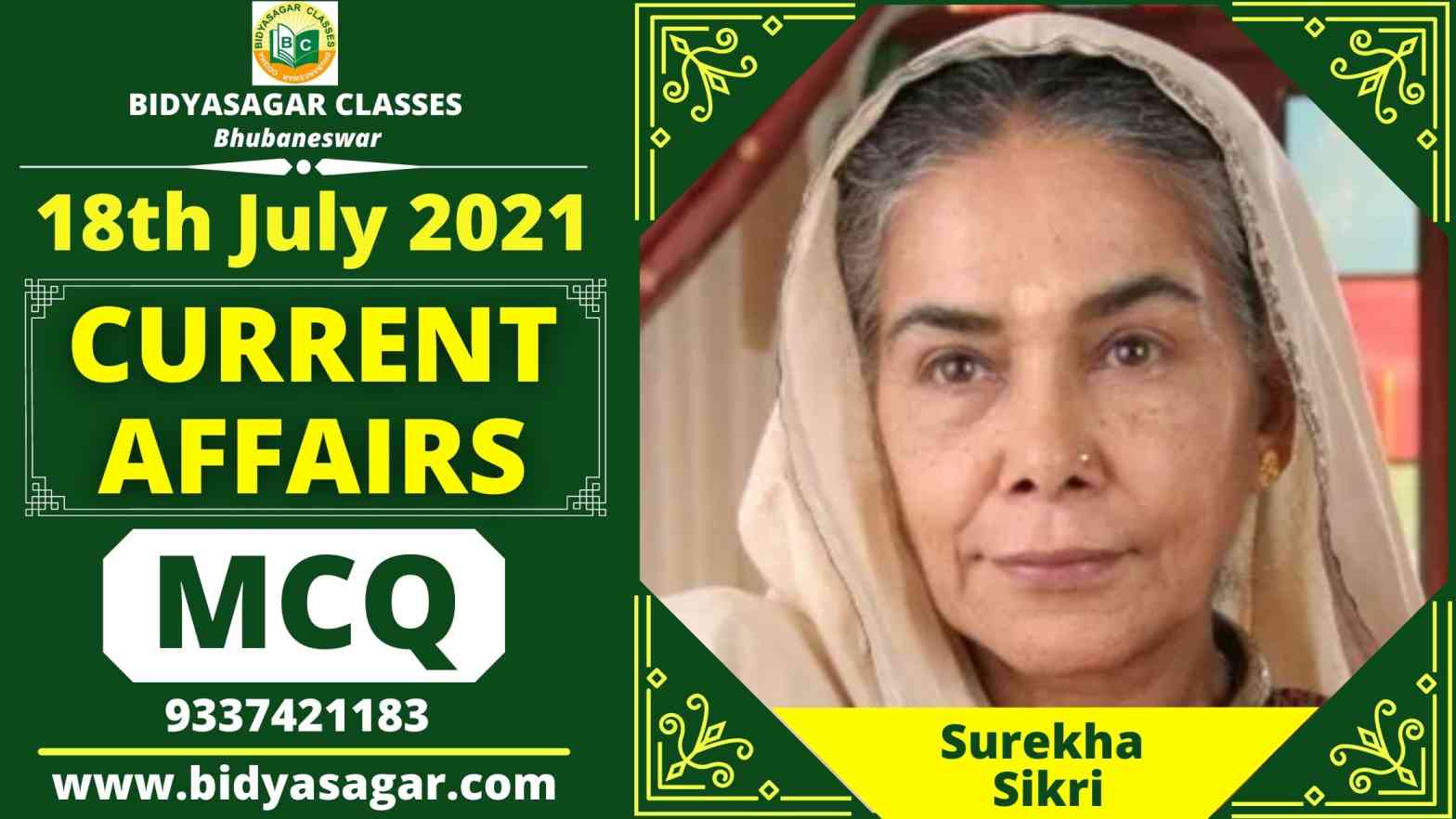 In this article, we will discuss MCQ on important current affairs of 18th July 2021 and their answers with explanations.

1. How many Crores has been released by the Finance Ministry as GST compensation to the states and union territories?

2. National Commission for Women has recently signed MoU with whom to sensitize police personnel towards gender equality?

3. A memorandum of understanding has been recently signed between ITRA under the Ministry of AYUSH and which state government?

A. Government of Punjab

B. Government of Delhi

4. Which day is celebrated around the world on 18th July?

5. Recently what has been renamed as “Common High Court of UT of Jammu & Kashmir and UT of Ladakh”?

A. Jammu and Kashmir High Court

6. Gira Sarabhai, the co-founder of the National Institute of Design in Ahmedabad, has passed away recently?

7. The government of which of the following country has recently released an online hub for the victims of ransomware attacks?

8. As per the Ministry of Haj and Umrah of which of these countries, the requirement of male guardian for women participating in Haj has been abolished?

10. Mamnoon Hussain passed away recently. He was the former president of which of the following country?

11. World Day for International Justice is observed on _______ every year.

12. Which of the following state has recently announced a 10% reservation for the Kapu community and other Economically Weaker Sections (EWS)?

14. Which state government has launched the new Electric Vehicle Policy-2021?

15. ‘Mathrukavacham’ is a COVID vaccination programme organised by the state of Kerala for who among the following?

16. Name the digital platform to facilitate farmers with technological interventions.

20. Which digital platform has been launched to help farmers get right information at right time?

1. D
The Finance Ministry has recently released Rs 75,000 Crores as GST compensation to the states and union territories. This amount is in addition to the GST compensation which is paid to the states on a bi-monthly basis out of the actual cess collection.
2. C
National Commission for Women has recently signed an MoU with Bureau of Police Research and Development which aims at promoting gender equality in terms of laws and policies related to women. To ensure the sensitivity of police personnel towards and to bring about a change in the attitude and behavior of police officers while dealing with crimes against women.
3. C
Recently a Memorandum of Understanding (MoU) has been signed between the Government of Gujarat and the Institute of Teaching and Research in Ayurveda (ITRA) under the Ministry of AYUSH, which aims at running the Ayurveda campus in Jamnagar. All the institutions which have to be brought under ITRA. ITRA is the only institution under the Ministry of AYUSH, which has the status of Institute of National Importance.
4. B
International Nelson Mandela Day is celebrated all over the world on 18th July. The main purpose of this day is to make people aware of better works and to motivate them to cooperate with each other for good purposes.
5. A
The “Common High Court of UT of Jammu & Kashmir and UT of Ladakh” was recently renamed as “Jammu and Kashmir” by an order notified by the Department of Justice in the Ministry of Law. The name of this Court has been changed to “High Court” President Ram Nath Kovind has signed the Jammu and Kashmir Reorganization (Removal of Difficulties) Order, 2021.
6. C
Recently Gira Sarabhai, the co-founder of the National Institute of Design in Ahmedabad, has passed away at the age of 97. He also founded Mill’s National Institute of Design and Calico Museum of Textiles with his brother Gautam Sarabhai.
7. C
The America has recently released an online hub for victims of ransomware attacks. This online hub will make it easier for companies and municipalities to find resources and get help if they are targeted by cyber hackers.
8. C
According to the Ministry of Hajj and Umrah of Saudi Arabia, the requirement of male guardian for women participating in Haj has been abolished. And they can register with other women. Women wishing to perform Haj will have to register in person.
9. A
‘Bonalu’ is a traditional folk festival celebrated every year in the Telugu month of Ashadham (falling in June/July), in the twin cities of Hyderabad and Secunderabad, and some other parts of Telangana state.
10. D
Former president of Pakistan Mamnoon Hussain passed away. Mamnoon Hussain, who was born in Agra in 1940 and migrated with his parents to Pakistan in 1947, served as the 12th President of Pakistan between September 2013 and September 2018.
11. D
World Day for International Justice is observed on 17th July every year. It is observed to recognise the strengthening system of international justice and also to promote the rights of the victims.
12. C
The Andhra Pradesh government announced a 10% reservation for the Kapu community and other Economically Weaker Sections (EWS) for appointments in the initial posts and services in State government in accordance with the Constitution (103rd Amendment) Act, 2019.
13. D
Three-time national award-winning actress Surekha Sikri has passed away. The three-time National Award winner is best known for her performances in ‘Tamas’, ‘Mammo’, ‘Salim Langde Pe Mat Ro’, ‘Zubeidaa’, ‘Badhaai Ho’ and daily soap ‘Balika Vadhu’.
14. A
The Maharashtra state government has launched the new Electric Vehicle Policy-2021. The policy announced by the State Environment Minister, Aaditya Thackeray aims to accelerate the adoption of Battery Electric Vehicles in the country.
15. B
The Kerala government’s campaign ‘mathrukavacham’ to vaccinate all the pregnant women in the state against COVID-19 infection was inaugurated at the district level recently.
16. D
In order to facilitate farmers to get ‘right information at right time’ in their desired language, a digital platform namely ‘KisanSarathi’ was launched jointly by Narendra Singh Tomar, Minister for Agriculture and Farmers Welfare.
17. A
Top defence officials from India, Sri Lanka and the Maldives participated in a virtual trilateral tabletop exercise “TTX-2021”.
18. D
Indian Port Rail and Ropeway Corporation Ltd (IPRCL) has prepared a Detailed Project Report or DPR for the pod taxi service between Noida Airport at Jewar and Film City. This is a 14 km stretch. This will be India’s first pod taxi service.
19. A
Sony India will conduct National Hackathon ‘SAMVEDAN 2021’ in partnership with IIT Madras. The hackathon aims to inspire the students to solve India-specific problems of societal interest using the IOT Sensor Board.
20. D
Kisan Sarathi digital platform has been launched to help farmers get right information at right time. The portal has been developed by Digital India Corporation under the Ministry of Electronics and Information Technology.