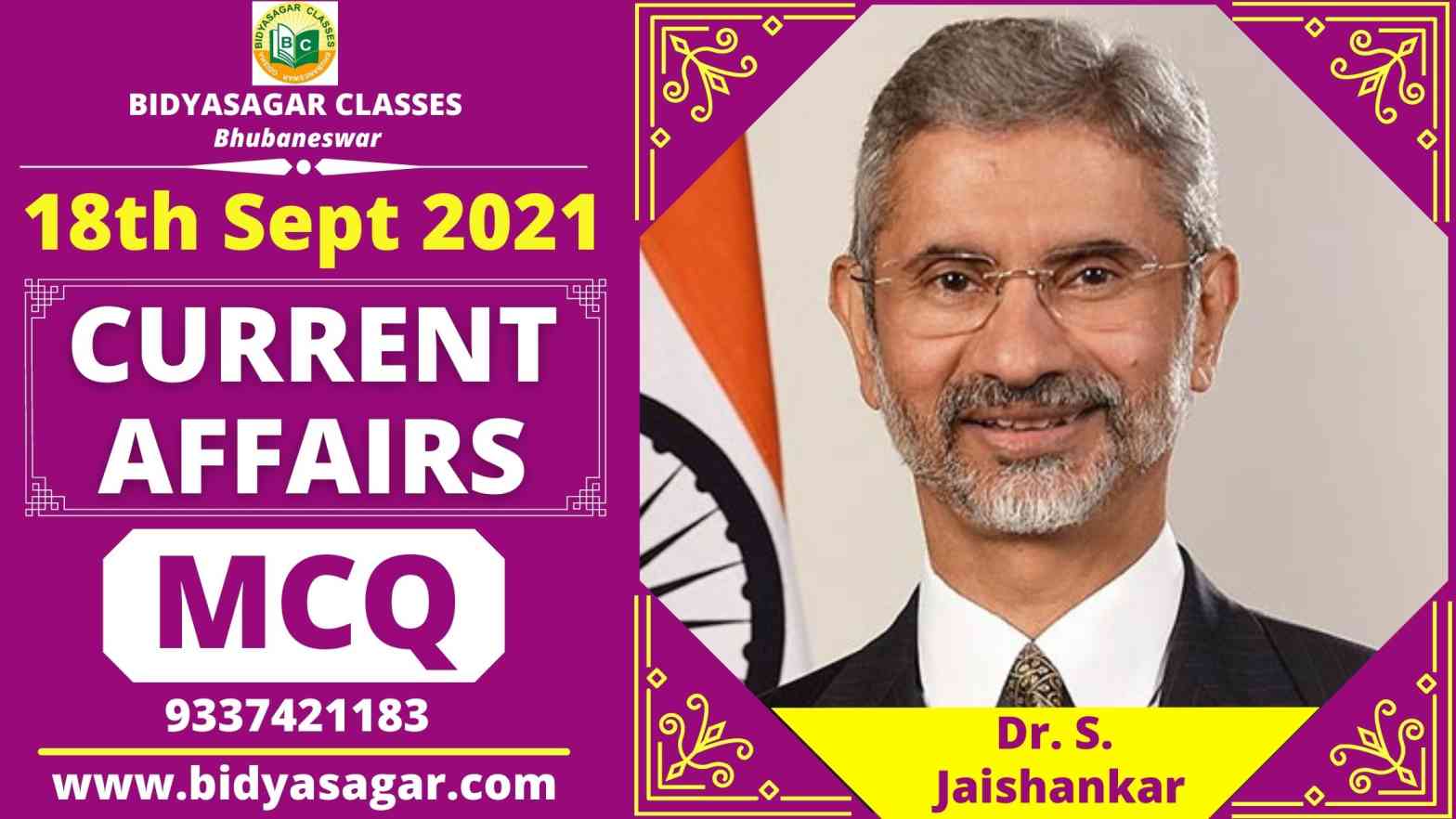 In this article, we will discuss MCQ on important current affairs of 18th September 2021 and their answers with explanations.

1. The 2021 Meeting of the SCO Council of Heads of State was held in which place?
A) Dushanbe
B) Bishkek
C) Ashgabat
D) Beirut
2. The Surya Kiran -XV is a Joint Military Training Exercise of Indian Army with which country?
A) Sri Lanka
B) Nepal
C) Maldives
D) Bangladesh
3. Which day in the year is celebrated as the World Bamboo Day?
A) 17 September
B) 15 September
C) 16 September
D) 18 September
4. NITI Aayog has tied up with which entity to launch tech-driven learning programmes for children from 112 Aspirational districts of the country?
A) Google India
B) Facebbok India
C) Byju’s
D) Amazon
5. Which day is marked as the International Coastal Cleanup Day every year?
A) Third Saturday in September
B) 18 September
C) 19 September
D) Third Friday in September
6. The World Water Monitoring Day is an annual event which takes place on____________
A) 16 September
B) 15 September
C) 17 September
D) 18 September
7. Who was the representative of India in-person at the 21st Meeting of the Shanghai Cooperation Organisation (SCO) Council of Heads of State?
A) Piyush Goyal
B) S. Jaishankar
C) Nitin Gadkari
D) Nirmala Sitharaman
8. The International Red Panda Day is marked every year on which day?
A) Third Sunday of September
B) Third Friday of September
C) Third Saturday of September
D) Third Wednesday of September
9. The International Equal Pay Day is observed annually on which day?
A) 18 September
B) 11 september
C) 15 September
D) 13 September
10. Who has been appointed as the Chairman cum Managing Director (CMD) of the National Small Industries Corporation Ltd. (NSIC)?
A) Narayan Tatu Rane
B) Anita Sharma
C) Bhanu Pratap Singh Verma
D) Alka Nangia Arora
11. The Exercise Surya Kiran-XV will be held in which place in 2021?
A) Pithoragarh
B) Dehradun
C) Pune
D) Ranchi
12. What is the theme of the 2021 World Bamboo Day?
A) Bamboo For Sustainable Development Goals (SDG) of United Nations
B) Bamboo Now
C) #PlantBamboo: It Is Time To Plant Bamboo
D) Keep Bamboo Strong
13. What is the theme of the International Coastal Cleanup Day?
A) Marine Animal: The Pelican
B) Keep trash in the bin and not in the ocean
C) Achieving a trash-free Coastline
D) Time for Nature
14. Who is the author of the book ‘Translating Myself and Others’?
A) Arundhati Roy
B) Sudha Murthy
C) Anita Desai
D) Jhumpa Lahiri
15. On the birthday of Prime Minister Narendra Modi, the BJP has announced to run a service-dedication campaign for how many days?
A. 5 days
B. 10 days
C. 15 days
D. 20 days
16. Which of the following woman has been elected as the chair of the International Civil Aviation Organization’s Committee on Aviation Safety?
A. Shefali Juneja
B. Indira Nooyi
C. Sanjana Singh
D. Kamala Harris
17. Recently who has launched skill development scheme for children from far flung areas?
A. Ministry of Transport
B. Ministry of Education
C. Ministry of Sports
D. Indian Railways
18. SCO Paceful Mission 2021 Which edition is held in Orenburg region of West Russia?
A. First Edition
B. Third edition
C. Fourth Edition
D. Sixth Edition
19. How many amateur astronauts has SpaceX launched on a private Earth orbit?
A. Two
B. Three
C. Four
D. Five
20. Who among the following has announced a new trilateral security partnership for the Indo-Pacific region?
A, Narendra Modi
B. Rajnath Singh
C. Joe Biden
D. Narendra Singh

1. A
The 21st Meeting of the Shanghai Cooperation Organisation (SCO) Council of Heads of State was held in hybrid format on September 17, 2021 in Dushanbe, Tajikistan. The meeting was held under the Chairmanship of President of Tajikistan, Emomali Rahmon.
2. B
The 15th edition of Indo – Nepal Joint Military Training Exercise Surya Kiran will be held from September 20, 2021.
3. D
World Bamboo Day is observed every year on 18 September to raise awareness of the benefits of bamboo and to promote its use in everyday products.
4. C
Government think tank NITI Aayog has entered into partnered with edtech major Byju’s, to provide free access to Byju’s high-quality and tech-driven learning programmes to children from 112 Aspirational districts of the country.
5. A
The International Coastal Cleanup Day is traditionally held on the third Saturday in September. In 2021, the day is being held on 18 September.
6. D
The World Water Monitoring Day is observed every year on September 18 since 2003 to increase public awareness and involvement in water monitoring and protecting water resources around the world.
7. B
The Indian delegation was led by Prime Minister Shri Narendra Modi, who participated in the meeting via video-link and at Dushanbe, India was represented by External Affairs Minister, Dr. S. Jaishankar. This was the first SCO Summit held in a hybrid format and the fourth Summit in which India participated as a full-fledged member of SCO.
8. C
The International Red Panda Day (IRPD) is celebrated every year on ‘Third Saturday of September’.
9. A
International Equal Pay Day is celebrated on 18 September. The inaugural edition of the day was observed in the year 2020.
10. D
Alka Nangia Arora has been appointed as the Chairman cum Managing Director (CMD) of the National Small Industries Corporation Ltd. (NSIC).
11. A
The 15th edition of Indo – Nepal Joint Military Training Exercise Surya Kiran will be held from September 20, 2021 at Pithoragarh in Uttarakhand.
12. C
The theme for 12th edition of WBD 2021 is ‘#PlantBamboo: It Is Time To Plant Bamboo’
13. B
Theme 2021: “Keep trash in the bin and not in the ocean. “
14. D
The Pulitzer Prize-winning noted fiction writer, Jhumpa Lahiri, is set to launch her new book titled ‘Translating Myself and Others’, which will highlight her work as a translator.
15. D
On the birthday of Prime Minister Narendra Modi, BJP has announced to run a 20-day service-dedication campaign. 20 years are being completed on 07 October while Narendra Modi as Prime Minister and CM and for this reason this program will run for 20 days.
16. A
Shefali Juneja, who was India’s representative in ICAO, has been elected as the Chairperson of the International Civil Aviation Organization Aviation Safety Committee, she is the first woman to hold this position. She is the first woman to head this strategic committee.
17. D
Indian Railways has recently started skill development scheme for children from far flung areas of the country, under which skill training will be given to 50 thousand children of remote areas and railways. Mobile skill training units will also be set up by the Govt. to improve its reach in remote areas.
18. D
The sixth edition of SCO Paceeful Mission 2021, a multilateral and joint counter-terrorism exercise, has been held in the Orenburg region of West Russia. In which the Indian military contingent consisting of all combined forces of 200 personnel, including 38 personnel of the Indian Air Force, has participated.
19. C
Aerospace company Space X has recently launched 4 amateur astronauts on private Earth orbiting journey. The amateur astronaut has 2 contest winners, a health care worker as well as their sponsor. This is the first time that any rocket has been launched into orbit with an all amateur crew.
20. C
US President Joe Biden has recently announced a new trilateral security partnership for the Indo-Pacific region. This trilateral security partnership called AUKUS was done between Australia, the United Kingdom and the United States.