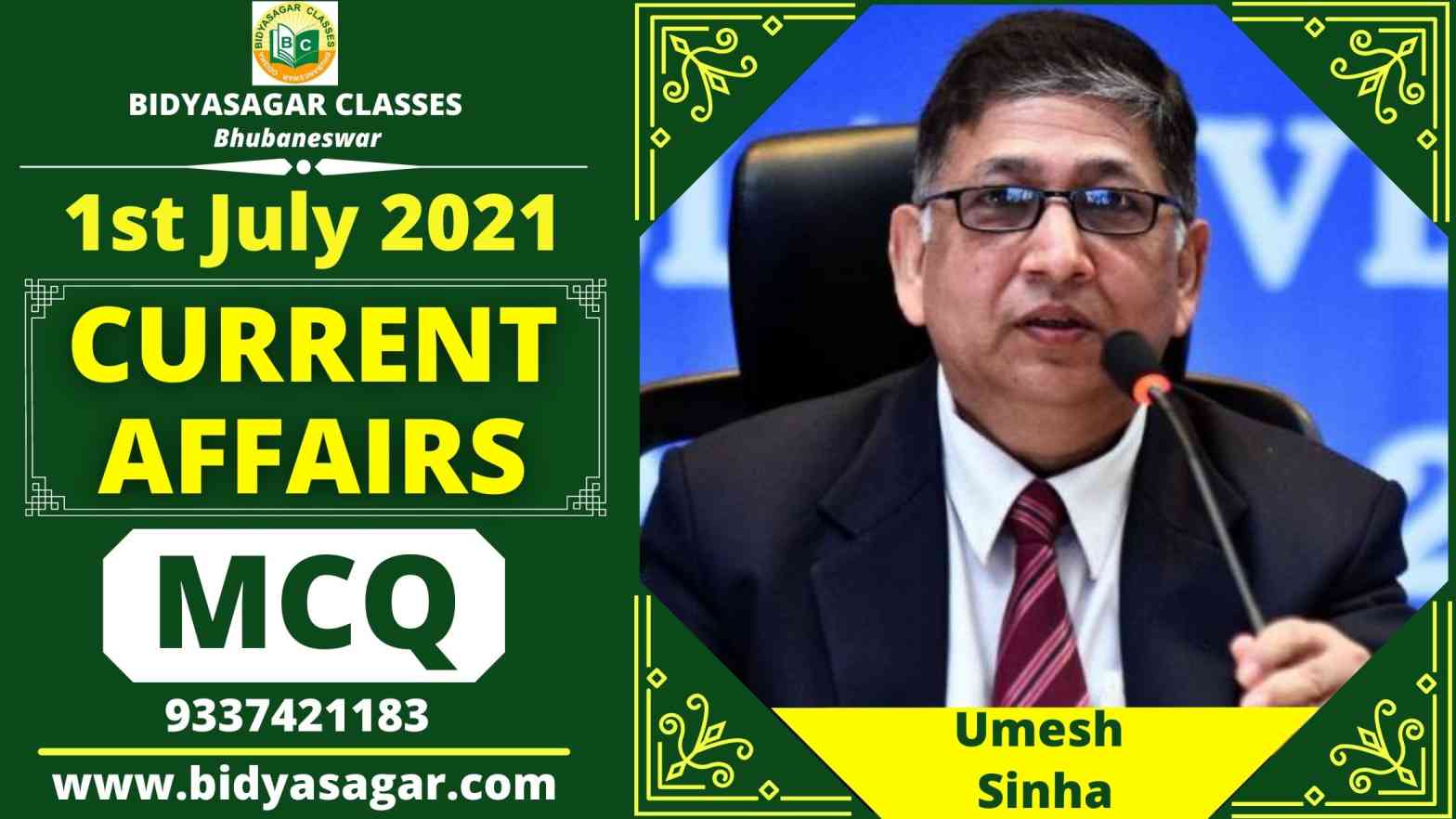 In this article, we will discuss MCQ on important current affairs of 1st July 2021 and their answers with explanations.

1. The Central Government recently approved a relief package of how many lakh crores?
A. 2.28 Lakh Crore
B. 3.28 Lakh Crore
C. 4.28 Lakh Crore
D. 6.28 Lakh Crore
2. The ISRO has recently announced the launch of the first unmanned Gaganyaan mission Which Year?
A. August 2021
B. December 2021
C. March 2022
D. June 2022
3. Which space agency has announced to appoint and launch the first disabled passenger in space?
A. ISRO
B. DRDO
C. European Space Agency
D. NASA
4. Senior journalist and Which Company founding editor P. Sainath has recently been honored with Japan’s prestigious Grand Fukuoka Prize 2021?
A. Tata Group
B. Mahindra Group
C. People’s Archive of Rural India
D. Canara Bank
5. Which Indian State has recently become the first rabies free state in India?
A. Kerala
B. Gujarat
C. Goa
D. Maharashtra
6. Which day is celebrated all over India on 1st July?
A. National Doctor’s Day
B. National Science Day
C. National Safety Day
D. National Knowledge Day
7. 1st July is the foundation day of which bank?
A. Punjab National Bank
B. Union Bank
C. State Bank Of India
D. Canara Bank
8. The name of which Indian spinner and veteran woman cricketer Mithali Raj has been recommended by the BCCI for the prestigious Khel Ratna Award?
A. Yuzvendra Chahal
B. R Ashwin
C. Pragyan Ojha
D. Ravindra Jadeja
9. The Union Cabinet has approved the MoU signed with which country in the field of health research?
A. Japan
B. Australia
C. Sri Lanka
D. Myanmar
10. Which documentary has won the ‘Best Biographical Film’ award at the Toronto International Women’s Film Festival?
A. Decoding Sachin
B. Decoding Lata
C. Decoding Shankar
D. Decoding Rahman
11. Which of the following has won the 1st mRNA based COVID-19 vaccine to get approved for emergency-use in India?
A. Moderna
B. Pfizer
C. Johnson and Johnson
D. Rochelle’s
12. Who has been appointed as USA’s interim envoy to India?
A. Manik Chandra
B. Soumen Ghosh
C. Atul Keshap
D. Binod Mishra
13. Which program has been launched by the L-G of Jammu & Kashmir for catalyzing women entrepreneurship?
A. HAUSLA
B. FAASLA
C. FAISLA
D. SAHELI
14. Who has been appointed as the new Grievance Officer of Twitter India?
A. Vishnu Raghav
B. Jeremy Kessel
C. Jayanti Arora
D. John Steyn
15. Who has been appointed as the new Head of Payments of Whatsapp India?
A. Manesh Mahatme
B. Mukesh Bansal
C. Manish Jain
D. Vidhu Seth
16. Who has been awarded with Japan’s Fukuoka Grand Prize 2021?
A. Ravi Tiwary
B. P Sainath
C. M S Jaiwal
D. B K Nitin
17. Who has been appointed as the Deputy Election Commissioner of India?
A. Sanjay Mishra
B. Brajesh Pandey
C. Pradeep Jain
D. Umesh Sinha
18. Central Government has extended the tenure of NITI Aayog’s CEO till June _______.
A. 2022
B. 2023
C. 2024
D. 2025
19. What is the rank of India in Global Cybersecurity Index (GCI) 2020?
A) 37
B) 10
C) 52
D) 29
20. National Postal Worker Day is an annual event which takes place on__________
A) 29 June
B) 30 June
C) 01 July
D) 28 June

1. D
The cabinet under the leadership of Prime Minister Narendra Modi has recently approved a relief package of Rs 6.28 Lakh Crore. Also, in the cabinet meeting, necessary decisions have been taken for the power and telecom sector, including providing free ration to 80 crore people.
2. B
The Indian Space Research Organization has recently announced the launch of the first unmanned Gaganyaan mission by December 2021. This launch was earlier to take place in December 2020 last year.
3. C
The European Space Agency has recently announced to appoint and launch the first disabled passenger in space. According to him, many para-astronauts have applied for this space journey.
4. C
P. Sainath, Founder and Senior Journalist Editor of People’s Archive of Rural India has recently been honored with Japan’s prestigious Grand Fukuoka Prize 2021. He raises the voice of the farming poor people in India. Along with him, two other people have also been given the Fukuoka Award. This Fukuoka Award was started in the year 1990.
5. C
India’s Goa has recently become the first rabies free state in India. Not a single rabies case has been registered in Goa in the last 3 years. This rabies control work has been done by the Mission Rabies Project.
6. A
National Doctor’s Day is celebrated all over India on 1st July. The main objective of celebrating this day is to honor the invaluable work done by the Indian Medical Association (IMA) doctors and physicians.
7. C
On 1st July the State Bank of India’s foundation day is celebrated. On this day in 1955, the Government of India acquired the Imperial Bank of India and named it “State Bank of India”. Presently the chairman of this bank is Dinesh Kumar Khara.
8. B
The Board of Control for Cricket in India has recently recommended Indian spinner R Ashwin and veteran female cricketer Mithali Raj for the prestigious Khel Ratna Award while Shikhar Dhawan, for the Arjuna Award. The names of KL Rahul and Jasprit Bumrah have been recommended.
9. D
The Union Cabinet has recently approved the MoU signed between India and Myanmar in the field of health research. The purpose of this agreement is to promote health research linkages in mutual research disciplines. Also to develop a network platform for emerging and viral infections.
10. C
‘Decoding Shankar’ has won the ‘Best Biographical Film’ award at the Toronto International Women’s Film Festival. The 45-minute documentary has been made by Deepti Sivan.
11. A
Moderna Vaccine (mRNA-1273) has become the 1st mRNA-based COVID-19 vaccine to get approved for emergency use in India. Moderna’s mRNA-1273 has an efficacy of 94.1 percent.
12. C
Atul Keshap has been appointed as the USA’s interim envoy to India. He had previously served as the Principal Deputy Assistant Secretary of State for the Bureau of East Asian and Pacific Affairs.
13. A
‘HAUSLA- Inspiring her growth’ programme has been launched by Lieutenant Governor of Jammu and Kashmir for catalyzing women entrepreneurship in the Union Territory. The programme aims to empower women to become vital drivers in the development of J & K.
14. B
Jeremy Kessel has been appointed as the new Grievance Officer of Twitter India. This move has been taken by Twitter in the wake of the Information Technology (Intermediary Guidelines and Digital Media Ethics Code) Rules, 2021.
15. A
Manesh Mahtme has been appointed as the new Head of Payments of Whatsapp India. He was previously serving as the Director and Board Member of Amazon Pay India.
16. B
Palagummi Sainath has been awarded Japan’s Fukuoka Grand Prize 2021. He is a renowned journalist and is also the founder of the People’s Archive of Rural India (PARI). He has been awarded for his contribution to promoting civil cooperation through his writing.
17. D
Umesh Sinha has been appointed as the Deputy Election Commissioner of India. It will be his second tenure as Deputy EC of India. He has also served as the Chief Election Commissioner of Uttar Pradesh.
18. A
Central Government has extended the tenure of National Institution for Transforming India’s (NITI) Chief Executive Officer (CEO) till June 2022. Amitabh Kant was appointed as the CEO of NITI Aayog in 2016.
19. B
India has been ranked as the 10th best country in the world in the Global Cybersecurity Index (GCI) 2020, released by International Telecommunication Union (ITU) on June 29, 2021. The GCI 2020 is the fourth edition of the annual index and ranked 194 countries. India scored 97.5 points from 100 points to rank among the top ten best countries in the world.
20. C
The National Postal Worker Day is marked every year on July 1 globally in recognition of the contribution made by postal workers in our society.