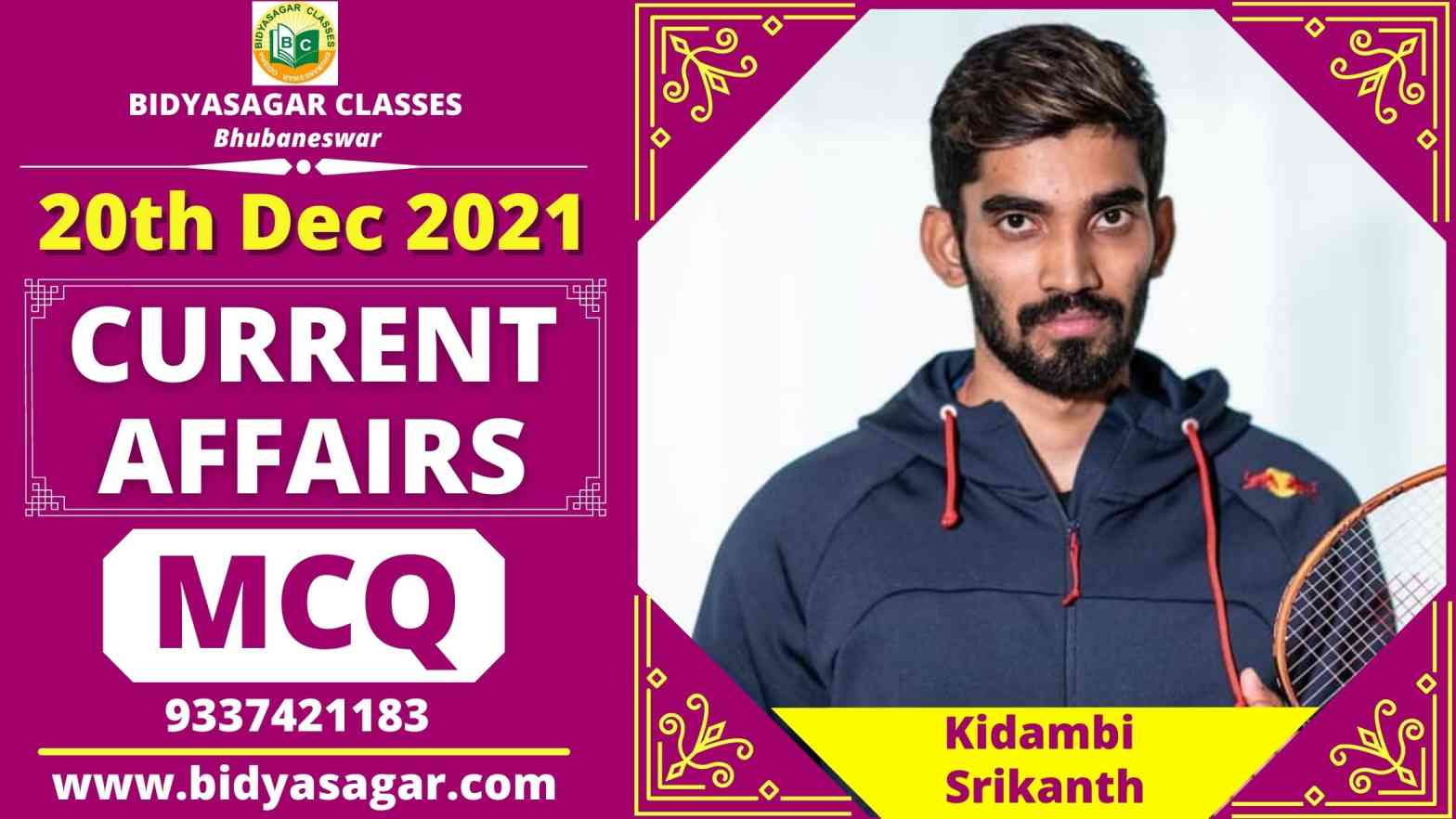 In this article, we will discuss MCQ on important current affairs of 20th December 2021 and their answers with explanations.

1. Who has become the first Indian male shuttler to win silver at BWF World Championships?
a) Kidambi Srikanth
b) Lakshya Sen
c) HS Prannoy
d) Sai Praneeth
2. Uttarakhand has appointed which cricketer as state brand ambassador?
a) Rishabh Pant
b) Ajinkya Rahane
c) Yuzvendra Chahal
d) Mayank Agarwal
3. Which state has deviced a 25-years action plan and set the goal of zero dropouts?
a) Punjab
b) Jharkhand
c) Tripura
d) Chhattisgarh
4. When is International Human Solidarity Day observed?
a) December 20th
b) December 21st
c) December 22nd
d) December 23rd
5. Who has been named the vice-captain of India’s test squad for the upcoming South Africa series?
a) KL Rahul
b) Cheteshwar Pujara
c) Mayank Agarwal
d) Ishant Sharma
6. Which of the following state has launched “SAHAY” scheme with an aim to nurture young sports talent in Maoist affected districts?
a) Bihar
b) Uttarakhand
c) Jharkhand
d) Sikkim
7. The Union Cabinet has recently approved a Production Linked Incentive Scheme of how many Crore rupees to promote Semiconductor?
a) Rs 46,000 Crore
b) Rs 56,000 Crore
c) Rs 66,000 Crore
d) Rs 76,000 Crore
8. Which state government has recently declared “Tamil Thai Vazhathu” as the state song?
a) Government of Kerala
b) Gujarat government
c) Government of Karnataka
d) Government of Tamil Nadu
9. Which state has recently tied up with UNCDF to start “Mission Shakti Living Lab” for financial empowerment of women?
a) Kerala
b) Odisha
c) Himachal Pradesh
d) Madhya Pradesh
10. Stuart Broad of England cricket team has become the first player in the world to play 150 matches in Test format?
a) 5th
b) 7th
c) 9th
d) 10th
11. Which of the following country has recently launched a draft agreement with NATO on security measures?
a) Japan
b) China
c) Russia
d) America

1. A
Kidambi Srikanth became the first Indian male shuttler to win silver at the BWF World Championships on December 19, 2021. He settled for the silver after losing to Singapore’s Loh Kean Yew in straight sets of 21-15, 22-20.
2. A
Uttarakhand Chief Minister Pushkar Singh Dhami appointed Indian cricketer Rishabh Pant as the state brand ambassador on December 19, 2021. The wicketkeeper-batsman has been appointed to the post to encourage the youth of the state towards sports and public health.”
3. C
Tripura government has devised an action plan for the next 25 years that focuses on infrastructure development, better employment and education opportunities. The Tripura Chief Secretary Kumar Alok said that the path of Tripura’s development for the next 25 years has been defined through the two-day Vision 2047 workshop that culminated on December 18.
4. A
International Human Solidarity Day is observed annually on December 20th to celebrate unity and diversity and raise public awareness regarding the importance of solidarity. The day seeks to remind governments to respect their commitments to international agreements and encourage debate on ways to promote solidarity for the achievement of the Sustainable Development Goals including poverty eradication.
5. A
KL Rahul was named as the vice-captain for India’s upcoming 3-match Test series against South Africa by the all-India Senior Selection Committee on December 18, 2021.
6. C
The Chief Minister of Jharkhand, Hemant Soren has recently launched “SAHAY” scheme with the aim of nurturing young sports talent in Maoist affected districts. The scheme has been launched to curb Left Wing Extremism, which has affected 19 out of 24 districts of the state.
7. D
The Union Cabinet has recently approved Rs 76,000 Crore Production Linked Incentive Scheme with the aim of promoting semiconductor and display manufacturing. Also, the total amount of incentives announced for the electronics sector has increased to Rs 2.30 lakh Crore.
8. D
The Government of Tamil Nadu has recently declared Tamil Thai Vazhathu is a prayer song as the state song. It is sung in praise of Tamil mother. Comments on Tamil Thai Vazhathu Song by Justice G.R. Swaminathan in Kan Elango v State on 6 December.
9. B
Odisha has recently tied up with “United Nations Capital Development Fund” to start “Mission Shakti Living Lab” for financial empowerment of women. This agreement has been started to empower women financially and promote gender equality.
10. D
Stuart Broad of the England cricket team recently became the 10th player in the world to play 150 matches in Test format, leaving behind former Sri Lankan cricketer Mahela Jayawardene. . He has become the third player from England in terms of playing the most Tests. James Anderson is ahead of him with 167 and Alastair Cook 161.
11. C
Russia has recently launched a draft agreement with the North Atlantic Treaty Organization (NATO) on security measures. According to the document, Russia and NATO will not individually strengthen their security, including within the framework of military alliances of coalitions and international organizations, at the expense of the security of others.