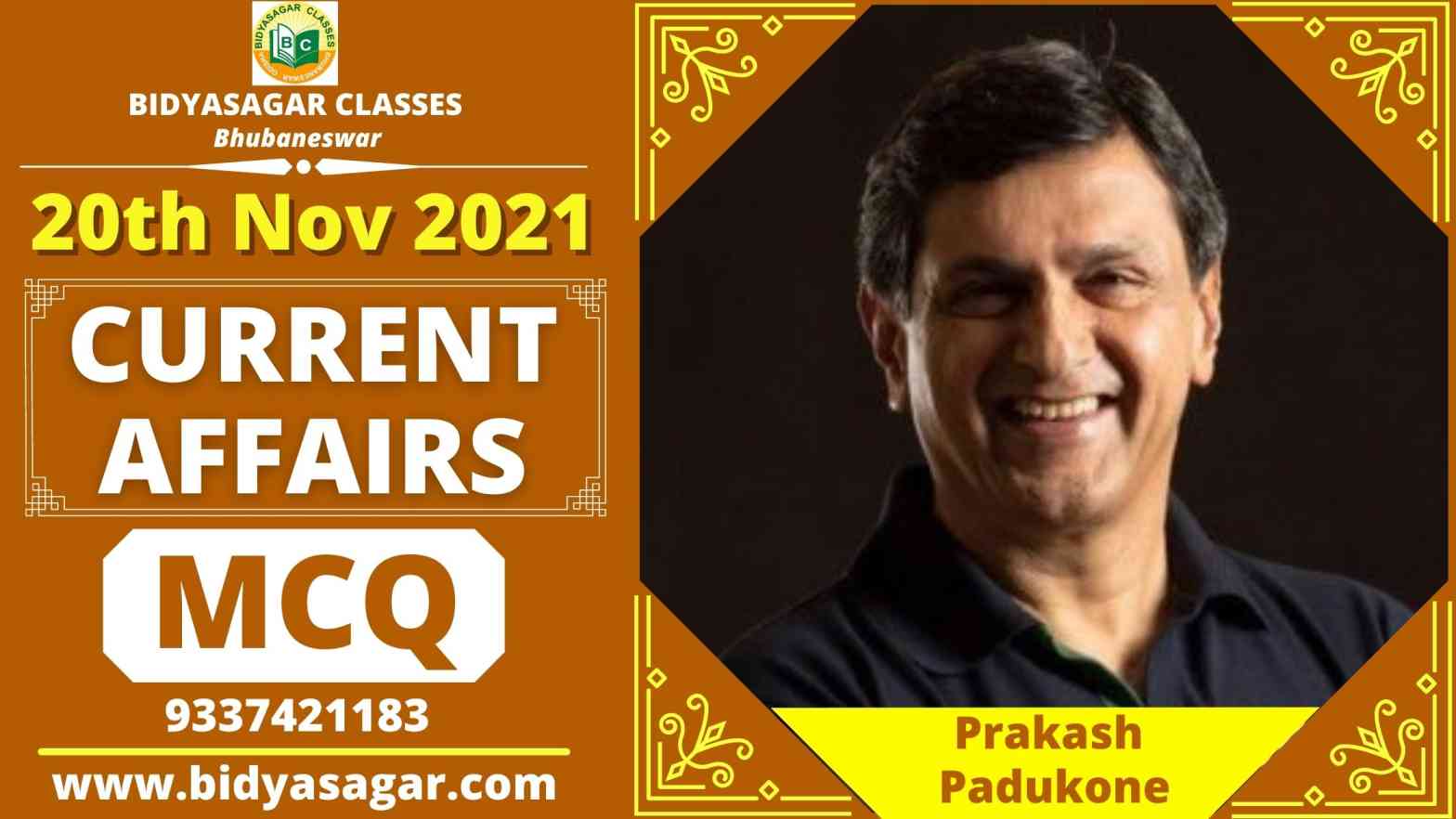 In this article, we will discuss MCQ on important current affairs of 20th November 2021 and their answers with explanations.

1. The Indian village Pochampally has been selected for the ‘Best Tourism Villages’ award by the United Nations World Tourism Organisation (UNWTO). In which state is the village located?
A) Odisha
B) West Bengal
C) Sikkim
D) Telangana
2. Which stock player has recently launched VOICE TRADING service, powered by artificial intelligence?
A) Zerodha
B) Paytm Money
C) Angel Broking
D) HDFC Securities
3. The revamped Rezang La War Memorial (Ahir Dham) has been inaugurated in which place?
A) Ladakh
B) Sikkim
C) Uttarakhand
D) Himachal Pradesh
4. Who has been named for the Lifetime Achievement Award for 2021 by the Badminton World Federation (BWF)?
A) Jwala Gutta
B) Pullela Gopichand
C) Prakash Padukone
D) Nandu Natekar
5. SIDBI has partnered with which technology major to launch $15 million financial assistance program for micro-enterprises?
A) Facebook
B) IBM
C) Microsoft
D) Google
6. Prime Minister Shri Narendra Modi recently launched various developmental projects in Mahoba worth over Rs. 3250 Crore. In which state is the Mahoba district located?
A) Uttar Pradesh
B) Gujarat
C) Maharashtra
D) Madhya Pradesh
7. What is the rank of India in the Bribery Risk Matrix 2021 by TRACE International?
A) 89
B) 82
C) 77
D) 71
8. Which player has won the 2021 Erste Bank Open Tennis title in men’s single?
A) Juan Sebastian Cabal
B) Daniil Medvedev
C) Alexander Zverev
D) Novak Djokovic
9. Which day is celebrated as the UN recognised World Children’s Day globally?
A) 17 November
B) 19 November
C) 15 November
D) 20 November
10. Which state has roped in Salman Khan as the ambassador for vaccine campaign in the Muslim-dominated region?
A) Maharashtra
B) Uttar Pradesh
C) Bihar
D) Assam
11. What is the theme of the 2021 Universal/World Children’s Day?
A) It’s a #KidsTakeOver
B) A Better Future for Every Child
C) Children are taking over and turning the world blue
D) Children of today, our keepers tomorrow
12. PM Modi has recently inaugurated the Atal Ekta Park in which place of the country?
A) Prayagraj
B) Bundelkhand
C) Indore
D) Jhansi
13. Which of the following ministry has announced the launch of “Water Heroes – Share Your Stories” contest?
A) Ministry of Education
B) Ministry of Sports
C) Ministry of Tribals
D) Ministry of Jal Shakti
14. Which of these ministries has signed MoU with the Department of Animal Husbandry and Dairying to improve the livestock sector?
A) Ministry of Food Processing Industries
B) Ministry of Sports
C) Ministry of Tribals
D) Ministry of Jal Shakti
15. How many unique cinematic Masterpieces have been announced in the Panorama section of the 52nd IFFI?
A) 15 Masterpieces
B) 32 Masterpieces
C) 55 Masterpieces
D) 68 Masterpieces
16. Which of the following organization has recently launched the second window of Swavalamban Challenge Fund (SCF)?
A) HDFC
B) SIDBI
C) Bank of Baroda
D) Mahindra
17. Prime Minister Narendra Modi has recently inaugurated which global innovation summit in the pharmaceutical sector?
A) Firist
B) Second
C) Third
D) Fourth
18. Which of the following country has recently successfully test-fired anti-satellite missile “DA-ASAT”?
A) Japan
B) America
C) Russia
D) Australia

1. D
The Pochampally village in Telangana has been selected for the ‘Best Tourism Villages’ award by the United Nations World Tourism Organisation (UNWTO).
2. B
Paytm Money, a wholly-owned subsidiary of fintech platform Paytm, has launched Voice Trading, powered by artificial intelligence. Voice Trading facility will allow users to place a trade or get information about stocks through single voice command.
3. A
Raksha Mantri Shri Rajnath Singh dedicated to the Nation renovated Rezang La War Memorial (Ahir Dham) at Chushul in Ladakh on November 18, 2021.
4. C
Indian badminton legend Prakash Padukone has been selected for the prestigious Lifetime Achievement Award for 2021 by the Badminton World Federation (BWF) Council.
5. D
The Small Industries Development Bank of India (SIDBI) has collaborated with Google on November 18, 2021 to launch $15 million financial assistance program for micro-enterprises. The one-of-a-kind programme by SIDBI is launched as a crisis response related to Covid-19 to reinvigorate the MSME sector in India.
6. A
Prime Minister Shri Narendra Modi dedicated to the Nation various developmental projects in Mahoba of Uttar Pradesh on November 19, 2021. PM inaugurated multiple projects with cumulative cost of more than Rs. 3250 Crore, related to alleviating the issue of water shortage in the region.
7. B
India is placed at 82nd position in the TRACE Bribery Risk Matrix 2021. The country stood at 77 position in 2020.
8. C
In Tennis, Alexander Zverev (Germany) defeated America’s Frances Tiafoe 7-5, 6-4 to win the 2021 Erste Bank Open in Vienna.
9. D
The Universal/World Children’s Day is celebrated on 20 November annually to promote international togetherness, awareness among children worldwide, and improving children’s welfare.
10. A
Maharashtra Government has roped in veteran Bollywood actor Salman Khan as vaccine ambassador for campaigning and appealing to people to take both the jabs of the Covid vaccine, especially in Muslim-dominated areas.
11. B
2021 Theme: A Better Future for Every Child
12. D
PM inaugurated Atal Ekta Park in Jhansi, named after former Prime Minister Shri Atal Bihari Vajpayee. The park has been built at a cost of over Rs 11 crore across an area of about 40,000 square metre. It also has the statue of Shri Atal Bihari Vajpayee, built by the renowned sculptor Shri Ram Sutar, the architect of the Statue of Unity.
13. D
Ministry of Jal Shakti has recently launched “Water Heroes – Share Your Stories” competition with an aim to encourage and collect best practices in water conservation and management from across India. has announced. Following the launch of the contest, entries will be invited for consideration of prizes every month.
14. A
Ministry of Food Processing Industries has recently tied up with the Department of Animal Husbandry and Dairying to facilitate extension of benefits to dairy entrepreneurs and dairy industries as well as to reform the livestock sector. The memorandum is signed.
15. C
Various films have been unveiled in the Panorama section of the 52nd International Film Festival of India (IFFI). In which 55 unique cinematic works from around the world will be displayed. The nine-day festival is being organized in Goa from November 20-28, 2021 in both hybrid and virtual formats.
16. B
Small Industries Development Bank of India (SIDBI) has recently launched the second window of Swavalamban Challenge Fund (SCF). The theme of which is “Green India”. The focus of this fund is on innovative projects addressing green and clean climate change.
17. A
Prime Minister Narendra Modi has recently inaugurated the first Global Innovation Summit of the pharmaceutical sector in virtual mode. In this summit, around 40 national and international speakers will deliberate on a range of topics including industry-academic collaboration, funding for innovation and innovation infrastructure.
18. C
Russia has recently successfully tested the anti-satellite missile “DA-ASAT” by shooting down a Russian satellite named COSMOS 1408. As a result of this, debris spread into low-Earth orbit. This test has so far generated about 1500 pieces of debris.