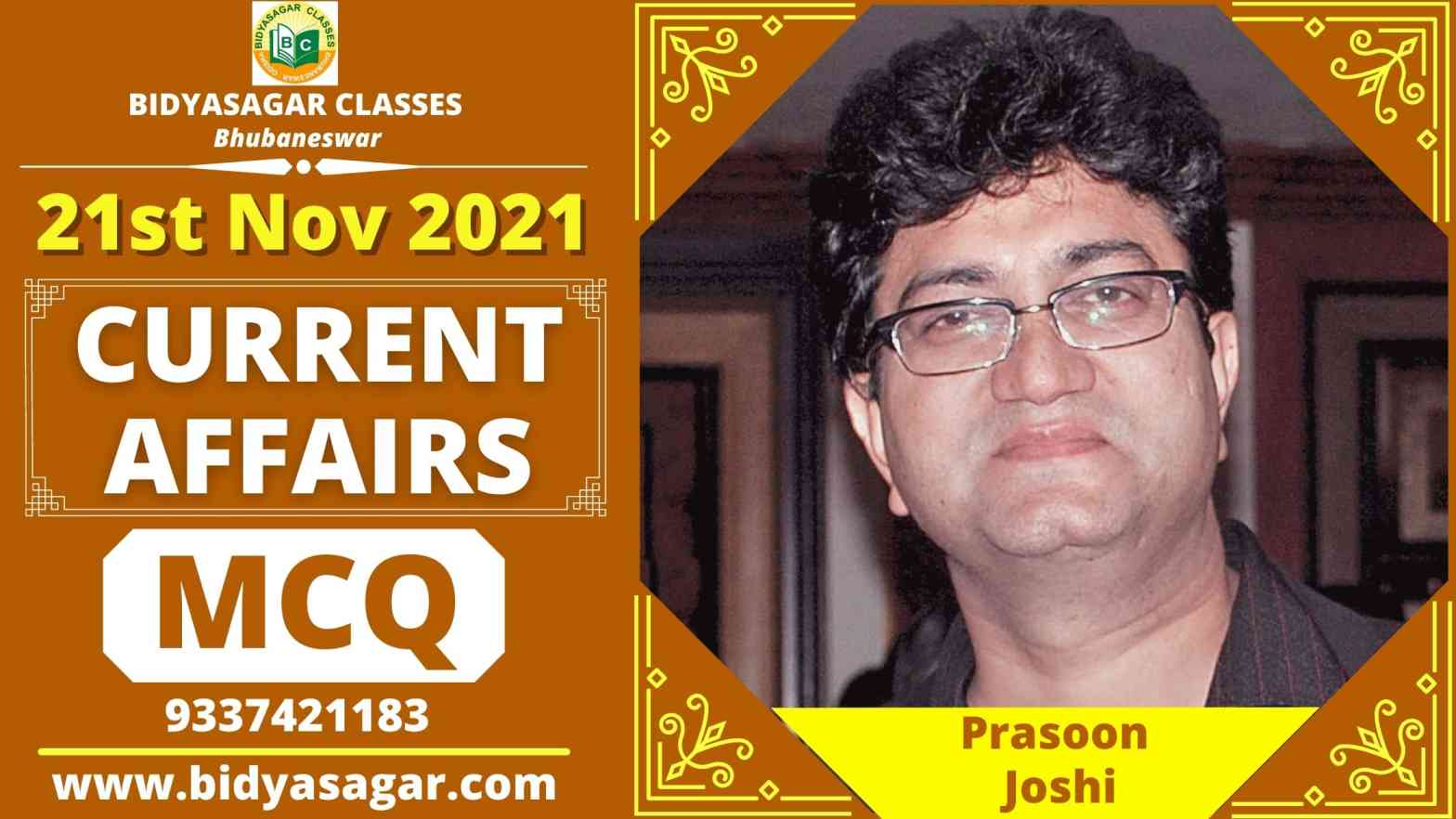 In this article, we will discuss MCQ on important current affairs of 21st November 2021 and their answers with explanations.

1. As per the recent data by World Bank, India was the top country in receiving remittances in 2021. What amount of remittance was received by the country?
A) USD 90 billion
B) USD 81 billion
C) USD 87 billion
D) USD 97 billion
2. Which city has received the Swachh Survekshan Award for 2021 for being the cleanest city of India?
A) Ahmedabad
B) Indore
C) Mumbai
D) Surat
3. The United Nations General Assembly has dedicated which day as the World Television Day?
A) 19 November
B) 20 November
C) 18 November
D) 21 November
4. Name the winners of the Indian Personality of the Year award for 2021 at the 52nd International Film Festival of India (IFFI) in Goa
A) Sridevi and Vishal Bhardwaj
B) Juhi Chawla and Farhan Akhtar
C) Hema Malini and Prasoon Joshi
D) Kajol and Aamir Khan
5. Which state has topped the IPF Smart Policing Index 2021 released by the Indian Police Foundation (IPF)?
A) Andhra Pradesh
B) Gujarat
C) Uttar Pradesh
D) Rajasthan
6. Which state has won the Cleanest State (with more than 100 urban local bodies) in Swachh Survekshan Awards 2021?
A) Madhya Pradesh
B) Chhattisgarh
C) Rajasthan
D) Andhra Pradesh
7. The 56th Conference of Director Generals of Police (DGP) and Inspector Generals of Police (IGP) has been organised in which city by the Intelligence Bureau (IB)?
A) Lucknow
B) Bhopal
C) Gurugram
D) Surat
8. Who is the author of the novel titled “Lal Salaam: A Novel”?
A) Rajnath Singh
B) Nitin Gadkari
C) Smriti Irani
D) Prakash Javadekar
9. Apart from American filmmaker Martin Scorsese, which other filmmaker has been honoured with the inaugural Satyajit Ray Lifetime Achievement Award at the 52nd International Film Festival of India (IFFI)?
A) Klaus Maria Brandauer
B) Istvan Szabo
C) Lajos Koltai
D) Andorai Peter
10. Former South African skipper AB de Villiers has announced his retirement from all forms of cricket, including from the Indian Premier League (IPL). He played for which IPL franchise?
A) Mumbai Indians
B) Chennai Super Kings
C) Kolkata Knight Riders
D) Royal Challengers Bangalore
11. When is the World Fisheries Day observed globally?
A) 20 November
B) 19 November
C) 21 November
D) 18 November
12. The World Day of Remembrance for Road Traffic Victims is commemorated every year on which day?
A) Third Sunday of November
B) Third Saturday of November
C) Third Friday of November
D) Third Monday of November
13. Who has stood first for the fifth time in a row in the Central Government’s annual cleanliness survey?
A) Pune
B) Indore
C) Chennai
D) Kolkata
14. Which state has recently launched a mobile app to improve and track waste collection?
A) Gujarat
B) Maharashtra
C) Punjab
D) Kerala
15. Which organization has published the fourth edition of the Global Report on Trends in Tobacco Use Practices?
A) UNESCO
B) world bank
C) NABARD
D) World Health Organization
16. Small Industries Development Bank of India has partnered with which company to support Micro, Small and Medium Enterprises?
A) Facebook
B) Amazon
C) Google
D) Twitter
17. How many years of Pradhan Mantri Awas Yojana – Grameen have been completed recently?
A) 3 years
B) 4 years
C) 5 years
D) 6 years
18. Which of the following country’s Prime Minister Fumio Kishida has announced a record-breaking stimulus package of about 56 trillion Japanese yen?
A) Sri Lanka
B) Taiwan
C) Saudi Arabia
D) Japan

1. C
India has received USD 87 billion in remittances in 2021 as per the report titled “Migration and Development Brief 35” released by World Bank and KNOMAD. KNOMAD is supported by a multi-donor trust fund established by the World Bank.
2. B
Indore has been adjudged as the cleanest city of India for the fifth consecutive year.11
3. D
The World Television Day is commemorated on 21 November every year.
4. C
Veteran actress Hema Malini and lyrics writer Prasoon Joshi have been conferred with the Indian Personality of the Year award for 2021.
5. A
Andhra Pradesh Police has topped the ‘IPF Smart Policing’ Index 2021, among 29 states and Union Territories, released by Indian Police Foundation (IPF) on November 18, 2021.
6. B
Cleanest State (with more than 100 urban local bodies)- Chhattisgarh;Cleanest State (with less than 100 urban local bodies)- Jharkhand
7. A
Prime Minister Shri Narendra Modi attended the 56th Conference of Director Generals of Police (DGP) and Inspector Generals of Police (IGP) organised at Police Headquarters in Lucknow on November 20, 2021. The two-day meet has been organised by the Intelligence Bureau (IB) in hybrid format. The conference will culminate on November 21, 2021.
8. C
Union Minister Smriti Zubin Irani has come out with her debut novel titled “Lal Salaam: A Novel”. The book is likely to hit the stands on November 29, 2021. It will be published by Westland.
9. B
legendary filmmakers Martin Scorsese and Istevan Szabo were honoured with the inaugural Satyajit Ray Lifetime Achievement Award.
10. D
Former South Africa captain AB de Villiers has announced his retirement from all forms of cricket on November 19, 2021. He had already retired from international cricket in 2018. However, AB de Villiers was still playing in the Indian Premier League (IPL) for Royal Challengers Bangalore (RCB), ever since joining the franchise in 2011.
11. C
World Fisheries Day is celebrated on 21 November every year by fishing communities across the world.
12. A
The World Day of Remembrance for Road Traffic Victims is marked every year on Third Sunday in the month of November. In 2021, World Day of Remembrance for Road Traffic Victims falls on 21 November 2021. Theme 2021 – “ACT for LOW SPEEDS /ACT for LOW SPEED STREETS”
13. B
Indore of Madhya Pradesh has been ranked first for the fifth time in a row in the annual cleanliness survey of the Central Government. Whereas Surat has got the second place and Vijayawada has got the third place. Varanasi in UP has been ranked first in the category of cleanest Ganga city in the annual cleanliness survey of the Central Government.
14. D
The Government of Kerala has recently launched a mobile app to improve and track waste collection. Smart Garbage Mobile App will be launched in all 6 municipal corporations, 300 village bodies and 70 municipalities in the initial phase.
15. D
Which organization has recently published the fourth edition of the global report on trends in the prevalence of tobacco use. Accordingly, the South-East Asia region has achieved the fastest rate of decline in tobacco use.
16. C
Small Industries Development Bank of India has partnered with Google India to support micro, small and medium enterprises. Under this agreement, a loan program targeted at micro-enterprises is being implemented by SIDBI. The size of the loan ranges from Rs 25 lakh to Rs 1 crore.
17. C
Pradhan Mantri Awas Yojana – Gramin has completed 5 years recently. 1.63 crore houses were built under this scheme. On this occasion, Ministry of Rural Development has celebrated Housing Day by organizing various activities with the States/Union Territories. So far Rs 1,47,218.31 crore has been released under this scheme.
18. D
Japan’s Prime Minister Fumio Kishida recently announced a record-breaking stimulus package of about 56 trillion Japanese yen. In addition, the Japanese government will prepare an additional budget by the end of 2021 to fund the stimulus program.