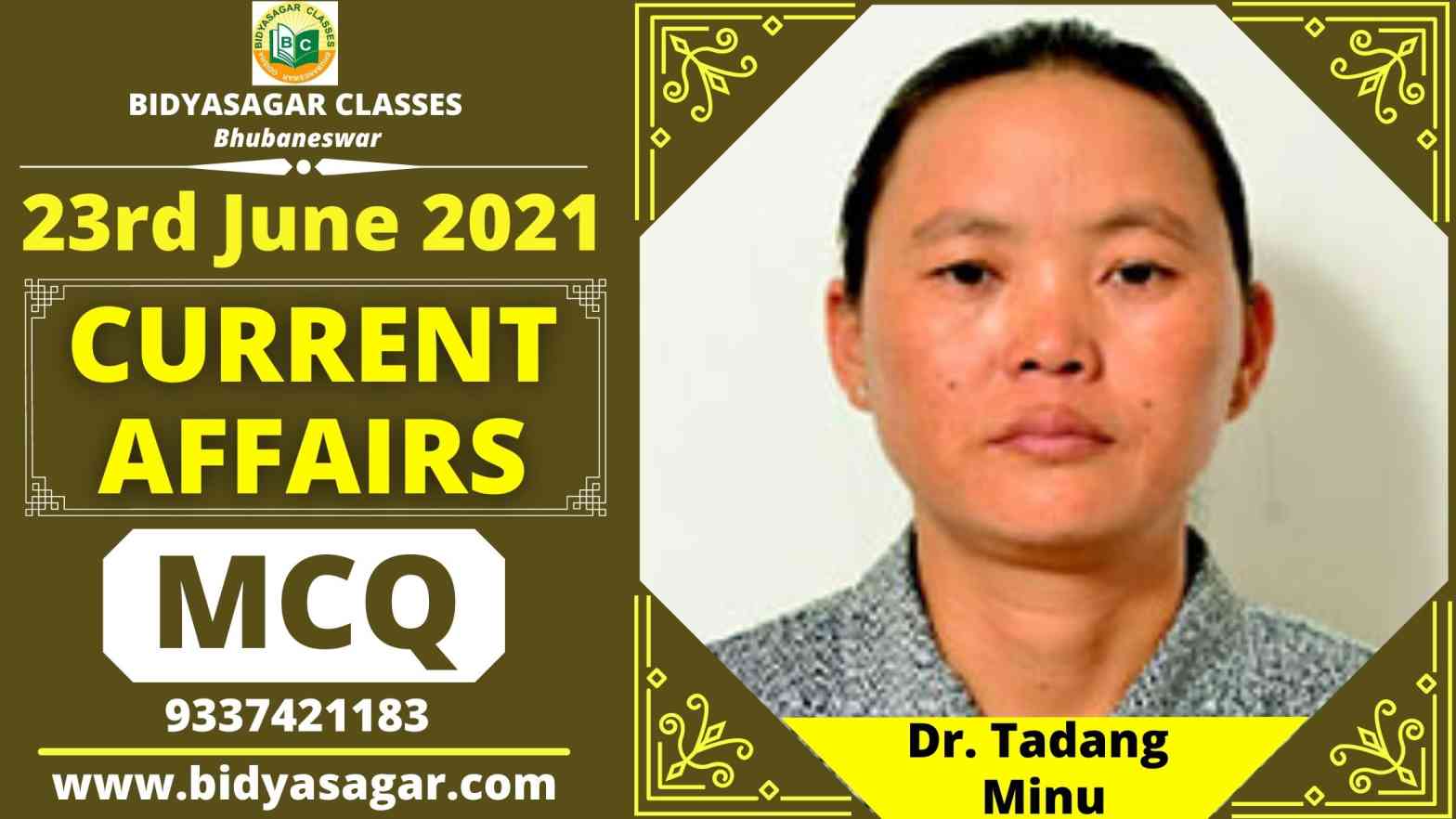 In this article, we will discuss MCQ on important current affairs of 23rd June 2021 and their answers with explanations.

1. Which of the following has recently approved the assessment scheme of CBSE and ICSE boards?

2. What is the rank of India among 165 countries of the world in the sixth edition of Sustainable Development Report 2021?

3. Which of the following country’s Prime Minister Justin Trudeau has nominated Mahmoud Jamal as the first black man judge in the country’s Supreme Court?

4. Which day is celebrated around the world on 23rd June?

5. BCCI has announced an assistance of how many crores rupees for the preparation of the players in the Olympics?

6. Yunus Khan has recently resigned as the batting coach of which cricket team?

7. BCCI has recently decided to bid for hosting the Champions Trophy from which year?

8. The army of which of these countries has recently successfully test-fired an aerial high-powered laser?

9. Which state government has launched ‘Mukhya Mantri Udyami Yojna’ scheme for all women and youth?

11. Name the Indo-American chemist who has been honoured with prestigious European Inventor Award 2021.

13. Which of the following country, India has conducted bilateral naval exercise in Indian Ocean to realize “Free and Open Indo-Pacific (FOIP)?

14. Who became the first Indian woman to be appointed as AIBA’s coaches’ committee member?

A) International Court of Justice

B) Permanent Court of Arbitration

C) International Tribunal for the Law of the Sea

16. Markets regulator Security and Exchange Board of India (SEBI) has reconstituted its four-member Takeover Panel. Who is the chairman of the panel?

17. Who will be first transgender athlete to compete at Olympics?

18. Bharti Airtel and ________ have announced a strategic partnership for implementing 5G network solutions for India.

19. Name the author of the book titled “The 7 Sins of Being A Mother”.

20. Which section of the Income-tax Act 1961 will declare PAN Card as inoperative, if not linked with the Aadhaar?

Justice A. A bench of M. Khanwilkar and Justice Dinesh Maheshwari recently approved the assessment scheme of CBSE and ICSE boards. The court has also dismissed the petitions challenging the decision to cancel the exam.

India has been ranked 120th out of 165 countries in the recently released 6th edition of the Sustainable Development Report, 2021. India’s score in this report was 60.1, while Finland stood first with a score of 85.90 and Sweden stood second with a score of 85.61.

International Widow Day is celebrated across the world on 23rd June. The day is widely observed to draw attention to the voices and experiences of widows and to encourage the unparalleled support they offer.

6 months ago Younis Khan, who was elected batting coach in Pakistan cricket team, has recently announced his resignation from the post of batting coach. He will no longer be with the team on the tour of England and West Indies. Younis Khan was upset with his opinion being constantly ignored in the Pakistan team selection.

Israel’s army has recently successfully tested an aerial high-powered laser. This laser can hit the drone in the air. Israel has shot down drone planes several times in tests with the help of airborne laser guns.

India received USD 64 billion in Foreign Direct Investment in 2020, the fifth largest recipient of inflows in the world, according to a UN report which said the COVID-19 second wave in the country weighs heavily on the country’s overall economic activities but its strong fundamentals provide “optimism” for the medium term.

Indian-American chemist Sumita Mitra, the first to have successfully integrated nanotechnology into dental materials to produce stronger and more aesthetically pleasing fillings, has been honoured with the European Inventor Award 2021 in the ‘Non-European Patent Office countries’ category.

Observed annually on 21 June, the World Hydrography Day highlights the importance of hydrography and its relevance. This important day was approved and implemented by the International Hydrographic Organization (IHO) as an annual celebration.

Ships of the Indian Navy and Japanese Maritime Self-Defense Force (JMSDF) on 14th June participated in a joint naval exercise at the Indian Ocean to realize “Free and Open Indo-Pacific (FOIP).

Dr. Tadang Minu based in Arunachal Pradesh has been appointed to the Coaches Committee of the International Boxing Association (AIBA), the parent body for boxing in the world. She is the first woman in the country and the second Indian to be appointed as a member of AIBA.

British lawyer Karim Khan was sworn in as the new chief prosecutor for the International Criminal Court, pledging to reach out to nations that are not members of the court and to try to hold trials in countries where crimes are committed.

The New Zealand weightlifter Laurel Hubbard is poised to make history and headlines, as well as significant controversy, after being confirmed as the first transgender athlete to compete at an Olympic Games.

Bharti Airtel and Tata Group have announced a strategic partnership for implementing 5G network solutions for India, which will be available for commercial development from January 2022.

Filmmaker-writer Tahira Kashyap Khurrana has announced her upcoming book about motherhood, titled “The 7 Sins of Being A Mother”.

As per the new Section 234H of the Income-tax Act 1961, which has been recently introduced during Budget 2021, the PAN cards which are not linked to Aadhaar after June 30, 2021, would be declared “inoperative”, as well as a penalty of Rs 1,000 may also be imposed.