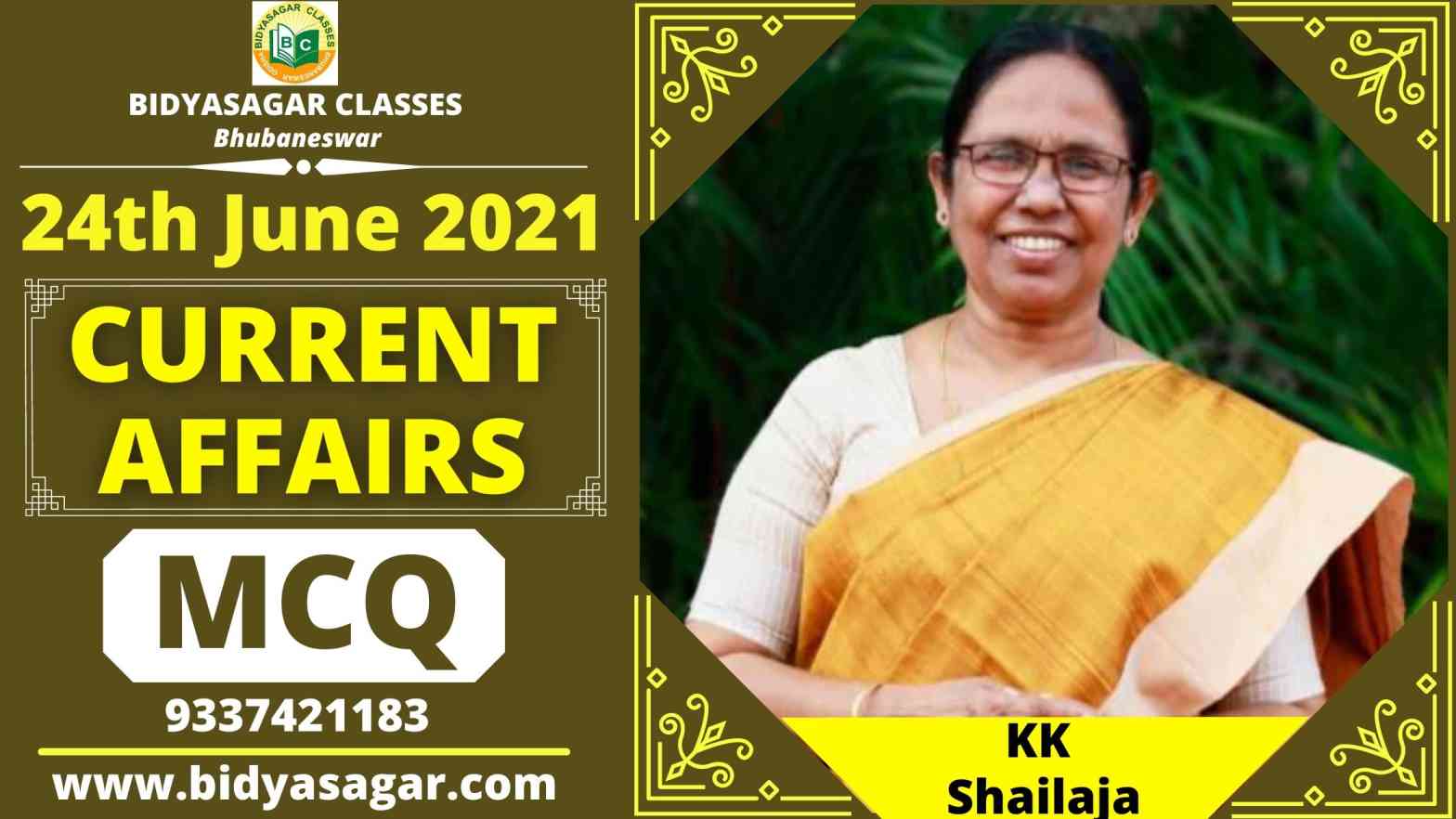 In this article, we will discuss MCQ on important current affairs of 24th June 2021 and their answers with explanations.

1. The central government has recently announced to sell Which Percentage stake in two public sector banks?
A. 42 Percent
B. 51 Percent
C. 62 Percent
D. 72 Percent
2. Which country has been declared the world’s most peaceful country in the 15th edition of the Global Peace Index?
A. Norway
B. Iceland
C. England
D. New Zealand
3. Rubber Board has recently started field trial of world’s first genetically modified rubber in which state?
A. Assam
B. Bihar
C. Gujarat
D. Jharkhand
4. In order to give impetus to the economy of which state of India, former RBI Governor Raghuram Rajan has joined the Economic Advisory Council?
A. Kerala
B. Gujarat
C. Maharashtra
D. Tamil Nadu
5. Malaysia has recently overtaken which country to become India’s largest crude palm oil exporter in 2020-21?
A. Saudi Arabia
B. Indonesia
C. Australia
D. Africa
6. India and which country have recently signed an MoU for cooperation in agriculture and allied sectors?
A. Indonesia
B. Fiji
C. Philippines
D. China
7. Scientists of which of the following countries have recently made a vaccine to fight against all dangerous viruses of the corona virus family, rather than Kovid-19?
A. Japan
B. America
C. Australia
D. Fiji
8. According to the US-India Strategic Partnership Forum, India and which country have recently launched “Hydrogen Task Force”?
A. Canada
B. America
C. China
D. Indonesia
9. Who has been awarded the prestigious Central European University (CEU) Open Society Prize for 2021?
(a) Sharankumar Limbale
(b) Rumana Sinha Sehgal
(c) K K Shailaja
(d) Guneet Monga
10. With which of the following naval force, India has conducted a joint exercise in Gulf of Aden?
(a) ASEAN
(b) SAARC
(c) SCO
(d) European Union
11. Theatre personality Arvind Gaur has released the book ‘Habba Khatoon’ written by Kajal Suri recently. Which of the following title is related to Habba Khatoon?
(a) The Nightingale of Goa
(b) The Nightingale of Punjab
(c) The Nightingale of Assam
(d) The Nightingale of Kashmir
12. Shelly-Ann Fraser-Pryce clocked the world’s second fastest women’s. She belongs to____________.
(a) Jamaica
(b) Republic of Congo
(c) Madagascar
(d) Morocco
13. Name the flying officer, who has become the first woman from Jammu and Kashmir to be inducted as a fighter pilot in the Indian Air Force (IAF).
(a) Mawya Sudan
(b) Avani Chaturvedi
(c) Bhawana Kanth
(d) Mohana Jitarwal
14. Which of the following ministry has launched a nationwide “JaanHaiToJahaanHai” awareness campaign on Corona vaccination for rural and remote areas?
(a) Ministry of Women and Child Development
(b) Ministry of Health and Family Welfare
(c) Ministry of Home Affairs
(d) Ministry of Minority
15. Ministry of Finance has allowed housing finance companies (HFCs) with asset size of over __________ to recover the dues using SARFAESI law.
(a) Rs. 100 crore
(b) Rs. 200 crore
(c) Rs. 300 crore
(d) Rs. 400 crore
16. Who has been appointed as the director of NIMHANS for five years?
(a) Sushila Chandrasekar
(b) Pranhita Rao
(c) Sunitha Murthy
(d) Pratima Murthy
17. Who was named as captain of the 16-member Olympic-bound Indian men’s hockey team?
(a) Harmanpreet Singh
(b) Birendra Lakra
(c) Manpreet Singh
(d) Rupinder Pal Singh
18. Which of the following city of India has emerged as the top five technology centres in the APAC region?
(a) Hyderabad
(b) Bengaluru
(c) Chennai
(d) Mumbai
19. Who was named as the captain of the 16-member Olympic-bound Indian Women’s Hockey Team?
(a) Rani Rampal
(b) Vandana Katariya
(c) Rajani Etimarpu
(d) Sunita Lakra
20. What is the theme of International Olympic Day 2021?
(a) Stronger Together
(b) United By Sport
(c) Move, learn and discover
(d) Stay healthy, stay strong, stay active with the #OlympicDay workout on 23 June

1. B
The central government has recently announced the sale of 51 Percent stake in two public sector banks (Central Bank of India and Indian Overseas Bank). The market value in the stock market of these two banks being private, according to their share price, is Rs 44,000 crore.
2. B
Recently, in the 15th edition of the Global Peace Index, Iceland has been declared the world’s most peace-loving country in the list of 163 countries. India has been ranked 135th in this index, while Bhutan has been ranked 22nd, Nepal 85th, Bangladesh 91th, Sri Lanka 95th.
3. A
Rubber Board has recently conducted the world’s first genetically modified field trial in Assam. This GM rubber has been developed at the Biotechnology Laboratory at the Indian Rubber Research Institute at Puthupalli, Kottayam. This genetically modified rubber was planted at the Rubber Board’s Sarutari research farm in Guwahati.
4. D
Tamil Nadu Chief Minister MK Stalin’s advisory council includes many more economic experts to give impetus to the state’s economy, recently RBI Governor Raghuram Rajan has joined the Economic Advisory Council. . Also, Arvind Subramanian has been given a place in this advisory council.
5. B
Solvent Extractors Association of India, Malaysia’s palm oil exports to India grew by 238 per cent to 2.42 million tonnes in the first seven months of the year 2020-21, with Malaysia has overtaken Indonesia to become India’s largest crude palm oil exporter in 2020-21.
6. B
India and Fiji have recently signed a Memorandum of Understanding for cooperation in agriculture and allied sectors. The cordial and friendly relations between the two countries are based on mutual respect, cooperation and strong cultural and people-to-people ties.
7. C
America scientists have recently made a second generation vaccine to fight against all dangerous viruses of the corona virus family, not just Kovid-19. Successful trials of this vaccine have been done on rats. The trial of this vaccine on humans will take place next year.
8. B
According to the US-India Strategic Partnership Forum, India and the US have recently launched “Hydrogen Task Force”. Which will boost India’s energy security efforts. This force was launched by the US Department of Energy, Union Ministry of New and Renewable Energy and USISPF.
9. C
The Central European University (CEU) Open Society Prize for 2021 has been awarded to KK Shailaja, the former Health Minister of Kerala.
10. D
The Indian Navy is in the midst of a two-day exercise with the European Union Naval Force (EUNAVFOR).
11. D
The book has been penned down by Kajal Suri. Habba Khatoon, also known by the honorary title ‘The Nightingale of Kashmir’, was a Kashmiri poet and ascetic. She was the wife of Yousuf Shah Chak, the last Emperor of Kashmir.
12. A
amaican sprinter Shelly-Ann Fraser-Pryce became the second-fastest woman of all-time behind 100 metres world record holder Florence Griffith-Joyner when she clocked 10.63 seconds at a meet in Kingston.
13. A
Flying Officer Mawya Sudan has become the first woman from Jammu and Kashmir to be inducted as a fighter pilot in the Indian Air Force (IAF).
14. D
The Minority Affairs Minister, Mukhtar Abbas Naqvi launched a nationwide “JaanHaiToJahaanHai” awareness campaign on Corona vaccination for rural and remote areas.
15. A
Ministry of Finance has allowed housing finance companies (HFCs) with asset size of over Rs. 100 crore to recover the dues using SARFAESI law.
16. D
Dr. Pratima Murthy, head of Department of Psychiatry, National Institute of Mental Health & Neuro Sciences (NIMHANS), Bengaluru has been appointed as Director of the Institute for a period of five years. She will retire in March 2026. Dr Murthy was awarded the WHO Regional Director’s Special Recognition Award on ‘World No Tobacco Day 2021’.
17. C
Midfielder Manpreet Singh was named captain of the 16-member Olympic-bound Indian men’s hockey team, while experienced defenders, Birendra Lakra and Harmanpreet Singh, were named vice-captains.
18. B
Bengaluru has emerged as the top five technology centres in the APAC region while Hyderabad is ranked in the Top 10 list, a report by Colliers titled ‘Growth Engines of Innovation: How Asia Pacific Technology Hubs are Reshaping Regional Real Estate’.
19. A
Rani Rampal was named the captain of the 16-member Olympic-bound Indian Women’s Hockey Team, announced Hockey India.
20. D
The Olympic Day 2021 theme is “Stay healthy, stay strong, stay active with the #OlympicDay workout on 23 June.”