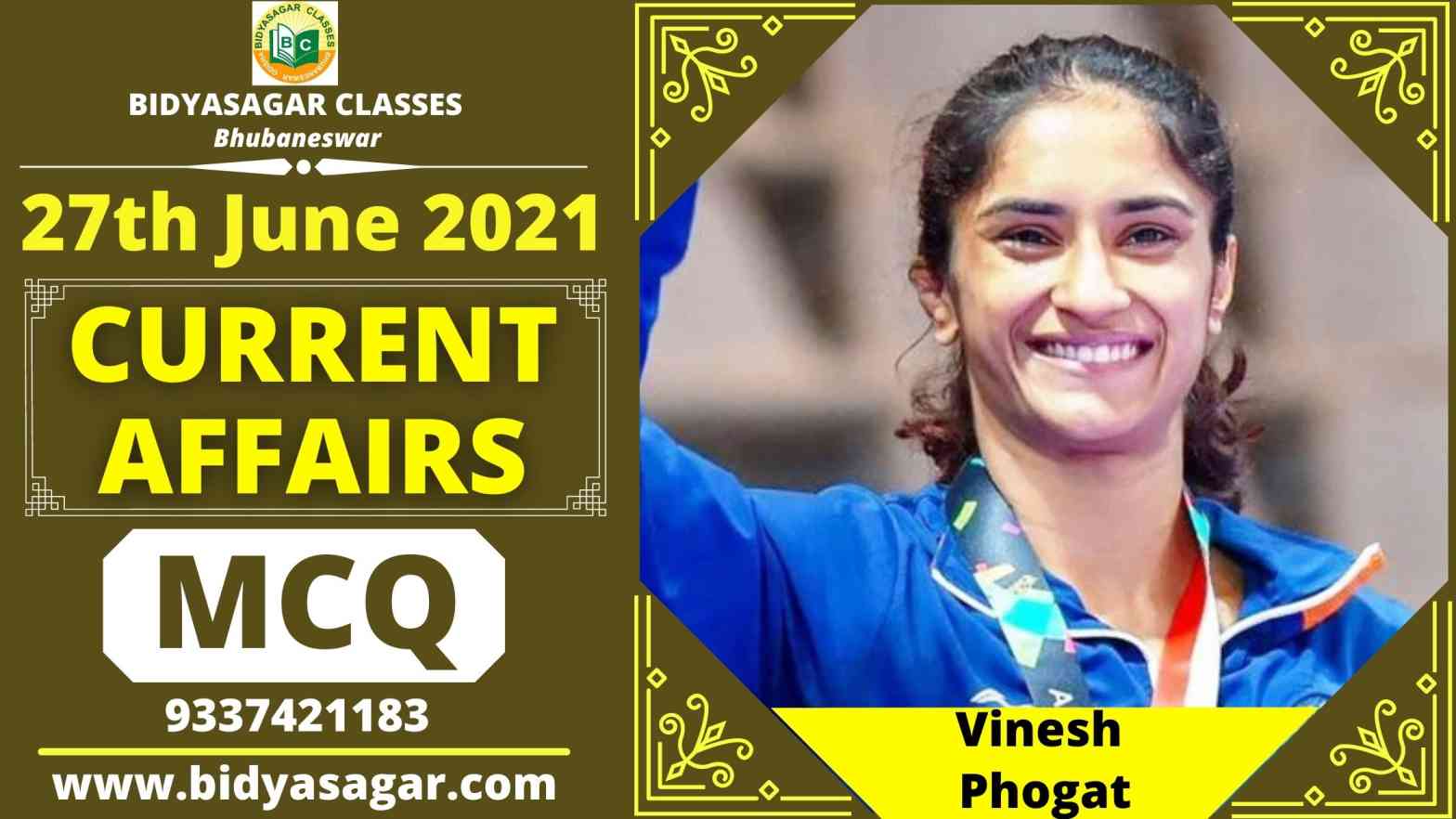 In this article, we will discuss MCQ on important current affairs of 27th June 2021 and their answers with explanations.

1. International Day in Support of Victims of Torture held on which day of the year?
A. 25 June
B. 26 June
C. 27 June
D. 28 june
2. What is the theme of International Day Against Drug Abuse and Illicit Trafficking 2021?
A. Better Knowledge for Better Care
B. Health for Justice, Justice for Health
C. Share Facts On Drugs, Save Lives
D. Listen First
3. Union Defence Minister Rajnath Singh has informed that India’s first Indigenous Aircraft Carrier (IAC-I), is planned to be commissioned by ______.
A. 2021
B. 2022
C. 2023
D. 2024
4. Which of the following has launched a centralized web-based workflow-based IT platform called “e-PGS”?
A. LIC
B. SBI
C. Kotak Mahindra Bank
D. Niti Aayog
5. Microsoft officially launched its new Windows operating system ‘___________’.
A. Windows Max
B. Windows Xe
C. Windows 10 pro
D. Windows 11
6. Which of the following state/UT has launched “Mukhyamantri COVID-19 Pariwar Aarthik Sahayata Yojana”?
A. Himachal Pradesh
B. Ladakh
C. Uttar Pradesh
D. Delhi
7. According to Bank for International Settlements, what is India’s bank credit-to-GDP ratio growth percentage in 2020?
A. 42%
B. 56%
C. 73%
D. 66%
8. Which of the following social media platform has recently joined with NSDC to launch the Digital Skill Champions Program?
A. Facebook
B. Telegram
C. Instagram
D. WhatsApp
9. Reliance Jio has recently collaborated with which of the following technology giant to provide 5G?
A. Apple
B. Microsoft
C. Google Cloud
D. Amazon
10. With which country, India has jointly launched the “Tax Inspectors Without Borders (TIWB)”?
A. Vietnam
B. Thailand
C. Maldives
D. Bhutan
11. Which Indian female wrestler has won the gold medal at Poland Open?
A. Geeta Phogat
B. Vinesh Phogat
C. Chanchala Kumari
D. Sushila Singh
12. Which state has been named as the ‘Best Smart State’ in the India Smart Cities Awards?
A. Uttar Pradesh
B. Madhya Pradesh
C. Andhra Pradesh
D. Himachal Pradesh
13. India’s 1st indigenously developed aircraft carrier (IAC-1) will be rechristened as INS ____________.
A. Vikram
B. Viraat
C. Vikrant
D. Vishesh
14. Which city/ cities has/ have secured the 1st rank in India Smart Cities Awards Contest 2020?
A. Surat
B. Hyderabad
C. Indore
D. A and C
15. Which state/ UT government has launched ‘Mukhyamantri COVID-19 Pariwar Aarthik Sahayata Yojana’?
A. Delhi
B. Chandigarh
C. Haryana
D. Punjab
16. Which of the following has become the 1st Rabies-free state in India?
A. Goa
B. Punjab
C. Kerala
D. Gujarat
17. Which institute has been named the ‘Best in India’ by the QS Executive MBA Rankings 2021?
A. IIM Ahmadabad
B. IIM Bangalore
C. IIM Lucknow
D. IIM Kolkata
18. Aarogyam Healthcare Business Loan has been launched by _________.
A. Bank of India
B. State Bank of India
C. Punjab National Bank
D. Bank of Baroda
19. Who will be the Chairperson of the IFSCA’s panel for examining best practices in ship financing and leasing?
A. Nirmala Sithraman
B. Anurag Basu
C. Vandana Aggarwal
D. Narendra Modi
20. World’s 1st GM-Rubber has been planted in _________.
A. Assam
B. Sikkim
C. Kerala
D. Bihar

1. B
International Day in Support of Victims of Torture is observed on 26th June every year. This day is observed by the United Nations to raise awareness among the people about human torture that it is not only unacceptable but it is also a crime.
2. C
The theme of International Day Against Drug Abuse and Illicit Trafficking 2021 is “Share Facts On Drugs, Save Lives”.
3. B
The Union Defence Minister Rajnath Singh has informed that India’s first Indigenous Aircraft Carrier (IAC-I), is planned to be commissioned by 2022. Once commissioned, the carrier will be rechristened as INS Vikrant, in memory of India’s first aircraft carrier.
4. A
Life Insurance Corporation (LIC) has launched a centralized web-based workflow-based IT platform called “e-PGS”. The new technology platform, e-PGS, has been designed to provide a centralized collection and payment accounting with a high level of bank integration.
5. D
Microsoft officially launched its new Windows operating system ‘Windows 11’. It is being called as the “next generation” of Windows.
6. D
Delhi government has launched “Mukhyamantri COVID-19 Pariwar Aarthik Sahayata Yojana” to provide financial assistance to the families who lost a member due to the Covid-19 pandemic.
7. B
Notwithstanding incremental credit growth plunging to a 59-year low at 5.56 per cent in FY21, the bank credit-to-GDP ratio rose to a five-year high of a little over 56 per cent in 2020, according to the latest data from the Bank for International Settlements (BIS).
8. D
The National Skill Development Corporation (NSDC) and WhatsApp announced an alliance to launch the Digital Skill Champions Program that aims to train India’s youth on digital skills, in order to make them employment ready. Through this program, school and university students would be coached to imbibe digital and online skills that would culminate with WhatsApp and NSDC awarding ‘Digital Skill Champions’ certification.
9. C
Reliance Jio Infocomm Limited (Jio), a subsidiary of Reliance Industries Limited, and Google Cloud are embarking on a comprehensive, long-term strategic relationship with a goal of powering 5G in enterprise and consumer segments nationwide.
10. D
India and Bhutan have jointly launched the “Tax Inspectors Without Borders (TIWB)” on June 23, 2021. TIWB is a joint initiative of United Nations Development Programme (UNDP) and Organisation for Economic Cooperation and Development (OECD).
11. B
Vinesh Phogat has won the gold medal at the Poland Open in the 53 kg. 26 year old wrestler clinched her third medal of the season.
12. A
Uttar Pradesh has been named as the ‘Best Smart State’ in the India Smart Cities Awards. Madhya Pradesh and Tamil Nadu secured the 2nd and 3rd rank respectively. The ranking has been prepared by Smart Cities Mission Project.
13. C
India’s 1st indigenously developed aircraft carrier (IAC-1) will be rechristened as INS Vikrant. It will be commissioned in the Indian Navy by 2022. It is being developed by Cochin Shipyard Limited.
14. D
Indore and Surat have jointly secured the 1st rank in India Smart Cities Awards Contest (ISAC) 2020. Chandigarh was placed at the top among the Union Territories.
15. A
Delhi government has launched ‘Mukhyamantri COVID-19 Pariwar Aarthik Sahayata Yojana’ for those who have lost a family member due to COVID-19. The government will provide an ex-gratia of 50,000 to the members of the individual who died.
16. A
Goa has become the 1st state in India to become Rabies-free. Not a single case of Rabies has been reported in the state for the last three years. ‘Mission Rabies’ launched by the Government of India played a crucial role in making Goa Rabies-free.
17. B
Indian Institute of Management (IIM) Bangalore has been named as the ‘Best in India’ be the QS Executive MBA Rankings 2021. IIM Bangalore has been ranked 39th in the global rankings.
18. B
Aarogyam Healthcare Business Loan has been launched by State Bank of India. SBI will now provide a loan of INR 100 crores to the healthcare ecosystem for a period of 10 years.
19. C
Vandana Aggarwal has been appointed as the Chairperson of International Financial Services Centers Authority’s (IFSCA) panel to deal with the examination of best practices in ship financing and leasing. Vandana is a former Senior Economic Advisor of the Government of India.
20. A
World’s 1st Genetically Modified (GM) Rubber has been planted in Assam. It has been developed by Rubber Research Institute of India, Kerala. The GM-Rubber crop has been planted in Rubber Board’s Sarutari Research Farm in the outskirts of Guwahati, Assam.