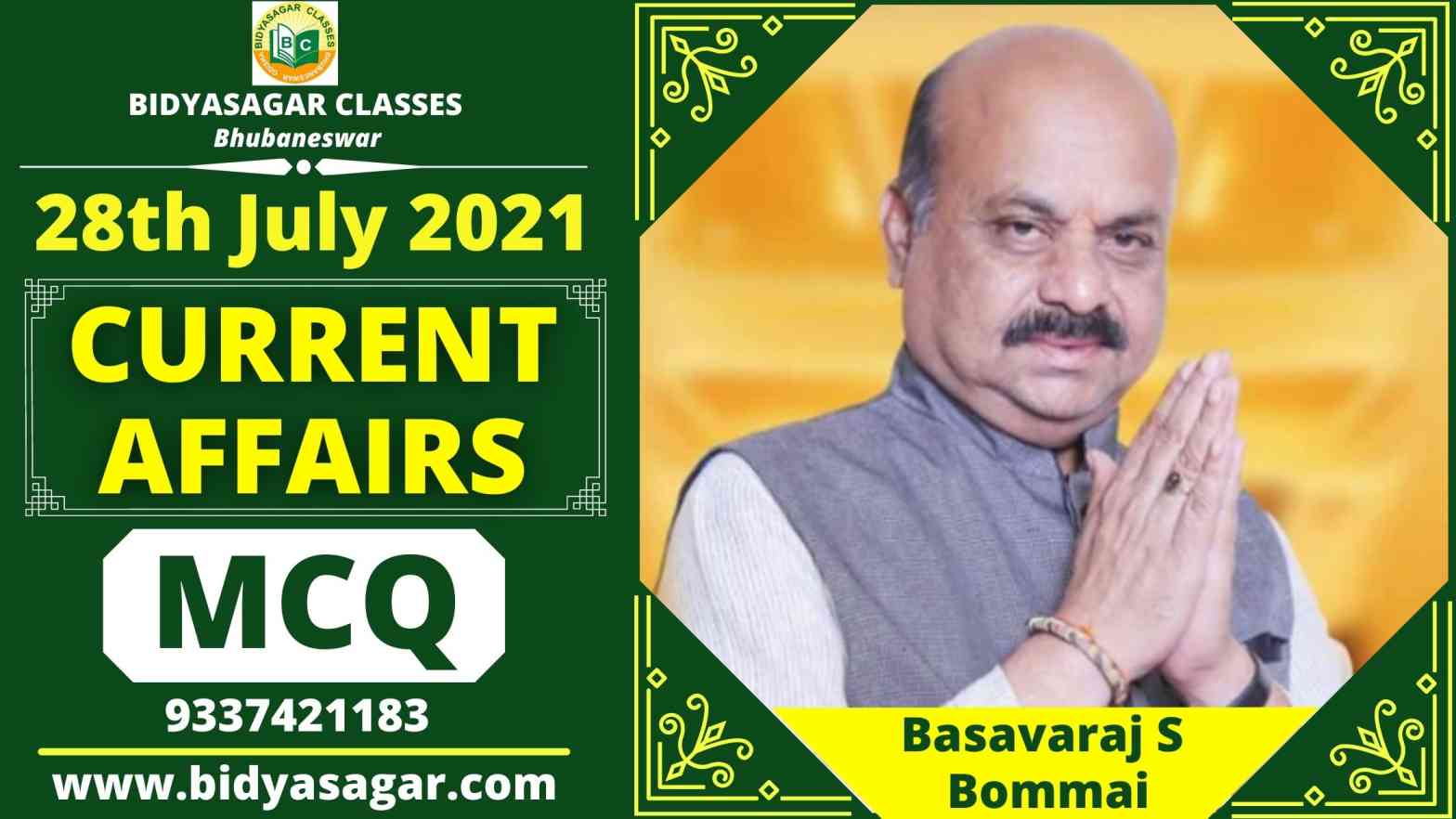 In this article, we will discuss MCQ on important current affairs of 28th July 2021 and their answers with explanations.

1. Name the new Chief Minister of Karnataka who has replaced BS Yediyurappa
A) Basavaraj S Bommai
B) Jagadish Shettar
C) S. M. Krishna
D) Ramakrishna Hegde
2. Dholavira is the newest Indian site to be inscribed on the UNESCO’s World Heritage list.Where is Dholavira located?
A) Ladakh
B) Mizoram
C) Telangana
D) Gujarat
3. The foundation stone of the first-ever Bamboo Industrial Park of the Northeast has been laid in which state?
A) Meghalaya
B) Assam
C) Tripura
D) Nagaland
4. The World Hepatitis Day is observed annually on which day?
A) 26 July
B) 27 July
C) 28 July
D) 25 July
5. What is the projected GDP growth rate of Indian economy for 2021-22 as per the International Monetary Fund (IMF)?
A) 9.5%
B) 8.5%
C) 10.5%
D) 11.5%
6. The bilateral joint military exercise INDRA 2021 is scheduled to be held in August 2021. The exercise will take place between the Indian Army with which country?
A) Sri Lanka
B) United States
C) Russia
D) Bangladesh
7. The World Nature Conservation Day is observed every year on _________
A) 25 July
B) 26 July
C) 27 July
D) 28 July
8. The Union Minister of External Affairs, Dr. S. Jaishankar led the Indian delegations at the International Conference titled “Central and South Asia: Regional Connectivity. Challenges and Opportunities”. The conference was held in which country?
A) Tajikistan
B) Uzbekistan
C) Kazakhstan
D) Turkmenistan
9. The Greater Sohra Water Supply Scheme has recently been inaugurated by Home Minister Amit Shah in which state?
A) Sikkim
B) Manipur
C) Assam
D) Meghalaya
10. Which Indian Ship is participating in the multinational maritime exercise named Cutlass Express 2021 (CE21)?
A) INS Talwar
B) INS Kolkata
C) INS Trikand
D) INS Arihant
11. The annual meeting of the Defence Ministers of Shanghai Cooperation Organisation (SCO) member states for 2021 has been organised in which country?
A) Ukraine
B) Tajikistan
C) Kyrgyzstan
D) Mongolia
12. Name the player who has won the Gold medal in the first ever skateboarding competition at the Olympic Games at Tokyo
A) Ryan Sheckler
B) Kelvin Hoefler
C) Yuto Horigome
D) Jagger Eaton
13. How many Indian Sites have been recognised by UNESCO as the World Heritage sites?
A) 40
B) 39
C) 42
D) 37
14. The IMF has projected the GDP growth rate of global economy at __________ percent in 2021
A) 5.0%
B) 6.0%
C) 7.0%
D) 4.0%
15. What is the theme of the World Hepatitis Day 2021?
A) Invest in eliminating hepatitis
B) Hepatitis-free future
C) Prevent hepatitis B and C
D) Hepatitis Can’t Wait
16. The Europa Clipper mission is the Earth’s first mission investigation of Jupiter’s moon named Europa. The mission is being undertaken by which space agency?
(a) NASA
(b) ISRO
(c) JAXA
(d) EUSA
17. Singapore’s Sunseap Group will build world’s largest $2 billion worth floating solar farm in which of the following country?
(a) Indonesia
(b) Philippines
(c) Switzerland
(d) Myanmar
18. The Chief Minister of which Indian state Naveen Patnaik has launched the Drink from Tap scheme in the state?
A. Kerala
B. Sikkim
C. Odisha
D. Gujarat
19. The court of which of the following country has declared fugitive businessman Vijay Mallya bankrupt?
A. Japan
B. China
C. America
D. Britain
20. Which country’s Foreign Minister Antony Blinken is on a two-day visit to India?
A. Japan
B. America
C. Australia
D. Africa

1. A
The Bharatiya Janata Party’s (BJP) legislature party has unanimously elected Basavaraj S Bommai as the new Chief Minister of Karnataka on July 27, 2021.
2. D
The historic Harappan City ‘Dholavira’ in the Rann of Kutchch, Gujarat has been inscribed on UNESCO’s World Heritage list on July 27, 2021, during the ongoing 44th session of the World Heritage Committee of the UNESCO.
3. B
Assam Chief Minister Shri Himanta Biswa Sarma laid the foundation stone of the first-ever Bamboo Industrial Park of the Northeast at Manderdisa in Dima Hasao district of Assam on July 26, 2021.
4. C
The World Hepatitis Day is observed on 28 July every year to raise global awareness of the burden of viral hepatitis, an inflammation of the liver that causes a range of health problems, including liver cancer.
5. A
The International Monetary Fund (IMF) has sharply cut India’s economic growth projection by 300 basis points, from 12.5 percent to 9.5 percent for the financial year 2021-22 (FY22). For FY23 (2022-23), IMF has estimated the gross domestic product (GDP) of India at 8.5 percent.
6. C
The 12th Edition of Indo-Russia joint military exercise called ‘Exercise INDRA 2021’ will be held at Volgograd, Russia from 01 to 13 August 2021.
7. D
The World Nature Conservation Day is observed every year on July 28 across the world.
8. B
Uzbekistan hosted a high-level International Conference titled “Central and South Asia: Regional Connectivity. Challenges and Opportunities” at Tashkent on July 15 and 16, 2021. From India, the Union Minister of External Affairs, Dr. S. Jaishankar led the Indian delegations at the event.
9. D
The Union Home Minister Amit Shah along with Meghalaya Chief Minister Conrad K. Sangma inaugurated the much-awaited and prestigious “Greater Sohra Water Supply Scheme” at Sohra, also known as Cherrapunji, in Meghalaya.
10. A
The Indian Naval Ship (INS) Talwar is participating in multinational maritime exercise named ‘Cutlass Express 2021 (CE21)’, which has been organised along the East Coast of Africa, in Mombasa, Kenya
11. B
Raksha Mantri Shri Rajnath Singh is on a three-day visit to Dushanbe, Tajikistan from July 27-29, 2021 to attend the annual meeting of the Defence Ministers of Shanghai Cooperation Organisation (SCO) member states.
12. C
Yuto Horigome of Japan has achieved the feat of winning the first ever skateboarding competition at the Olympic Games.
13. A
India has entered the Super-40 club for World Heritage Site inscriptions, since Dholavira is the 40th treasure in India to get UNESCO’s World Heritage status.
14. B
Incase of global economy IMF has projected 6.0 percent growth in 2021 and 4.9 percent in 2022.
15. D
Theme of World Hepatitis Day 2021 ‘Hepatitis Can’t Wait’.
16. A
The US space agency NASA has selected California-based SpaceX to provide launch services for Earth’s first mission to conduct detailed investigations of Jupiter’s moon Europa. The mission called ‘Europa Clipper mission’ is scheduled to be launched in October 2024 on a Falcon Heavy rocket from Launch Complex 39A at NASA’s Kennedy Space Center in Florida.
17. B
Singapore’s Sunseap Group says it plans to spend $2 billion to build the world’s largest floating solar farm and energy storage system in neighbouring Indonesian city Batam, which will double its renewable power generation capacity.
18. C
Odisha Chief Minister Naveen Patnaik has recently launched the Drink from Tap scheme in Odisha. With this, now the people of Jagannath Dham i.e. Puri city will not have to worry for pure drinking water because now every tap here will get high quality pure drinking water.
19. D
The Britain court has recently declared fugitive businessman Vijay Mallya bankrupt. After this decision of the Britain court, Indian banks will now be able to easily confiscate Mallya’s assets around the world. In the Britain court, law firm TLT LLP and barrister Marcia Scheckerdamian have argued on behalf of Indian banks during the hearing.
20. B
America Secretary of State Antony Blinken, US Secretary of State, has recently visited India on a two-day visit. Blinken will raise human rights in India and Pegasus espionage matters in the meeting while he is meeting Indian External Affairs Minister S Jaishankar on a two-day visit. This will be his first visit to India. At the same time, this will be the second visit by a high official of the Biden administration after coming to power in July.