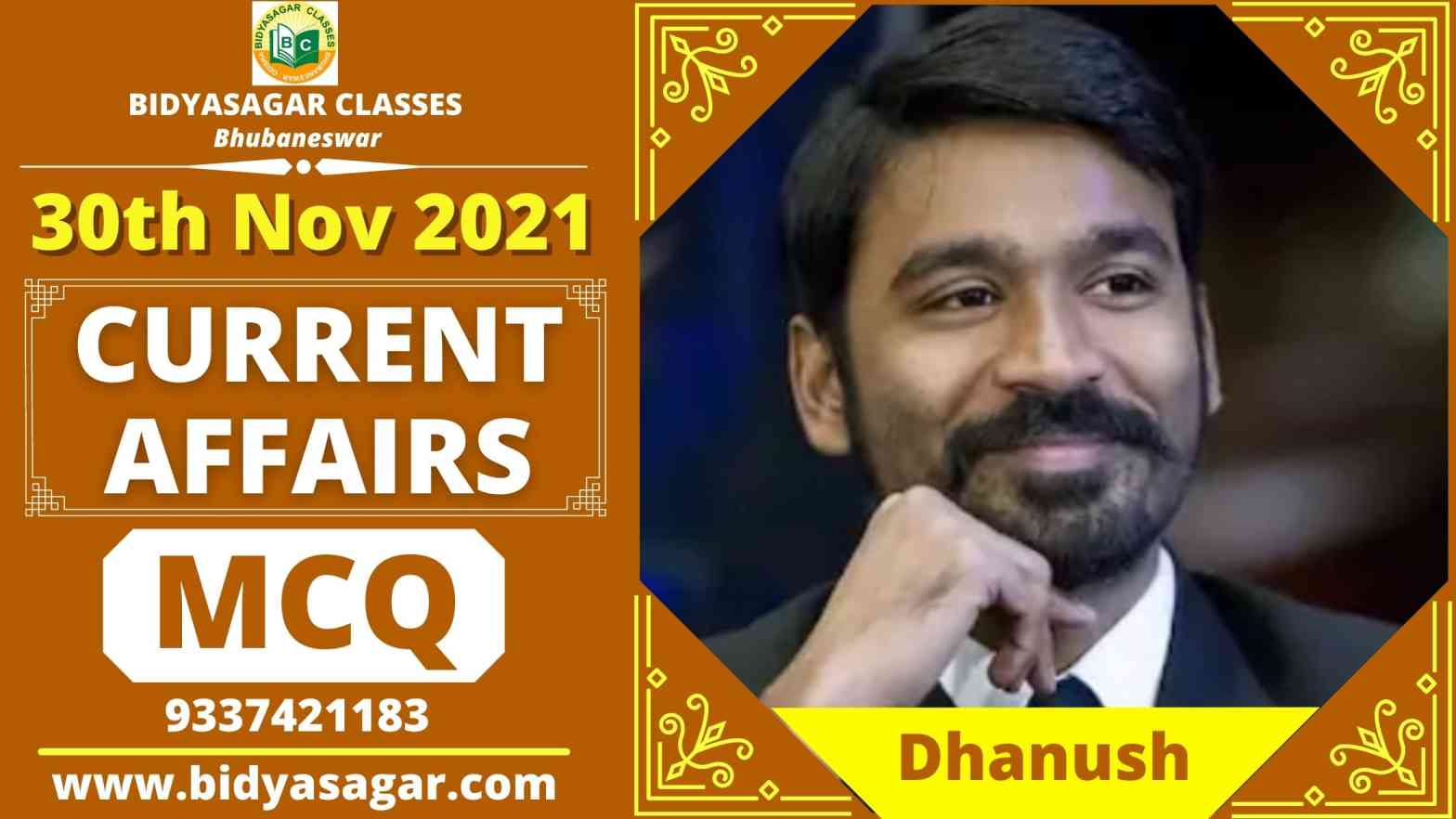 In this article, we will discuss MCQ on important current affairs of 30th November 2021 and their answers with explanations.

1. Which word has been chosen as the word of the year 2021 according to the Collins dictionary?
A) UPI
B) Transgender
C) NFT
D) Statement
2. Which of the following drama film has recently won the ICFT-UNESCO Gandhi Medal at the 52nd edition of IFFI?
A) smile
B) basket
C) Lingui, the Sacred Bonds
D) Brand of the World
3. Which former chairman of State Bank of India has been announced by Hero MotoCorp as an independent non-executive director on the board?
A) Urjit Patel
B) Rajnish Kumar
C) Sanjit Mehta
D) Sudip Mehta
4. As per the report of BrandZ India 2021 released by which of the following media company, Amazon has been ranked first in the technology ranking?
A) Kantar Group
B) HDFC Group
C) The Times Group
D) Bhaskar
5. Which state’s mountaineer Harshwanti Bisht has recently become the first woman president of the Mountaineering Foundation of India?
A) Jammu and Kashmir
B) Maharashtra
C) Uttarakhand
D) Himachal Pradesh
6. Recently which state has passed the “Motor Vehicle Taxation (Amendment) Bill 2021” to levy green tax on vehicles?
A) Kerala
B) Punjab
C) Gujarat
D) Andhra Pradesh
7. Indian Railways is constructing the world’s highest 111 km long bridge in which of these states?
A) Gujarat
B) Maharashtra
C) Delhi
D) Manipur
8. Which player has left behind Ravichandran Ashwin to reach the third place in terms of taking most wickets in Test cricket for India?
A) Anil Kumble
B) Kapil Dev
C) Mutiah Muralitharan
D) Harbhajan Singh
9. Who has been awarded the Best Actor award at the BRICS Film Festival 2021?
A) Vikram Gokhale
B) Jitendra Bhikulal Joshi
C) Kunal Kapoor
D) Dhanush
10. The Life Insurance Corporation of India has received the approval of RBI to increase its stake in Kotak Mahindra Bank from the present 4.96% to __________ percent
A) 6.99%
B) 9.99%
C) 7.99%
D) 8.99%
11. Petr Fiala has been sworn in as the new Prime Minister of which country?
A) Prague
B) Slovakia
C) Czech Republic
D) Austria
12. Which word has been declared as the word of the year 2021 by the Merriam-Webster dictionary?
A) Vaccine
B) Cicada
C) Perseverance
D) Insurrection
13. Name the winner of the ICFT-UNESCO Gandhi Medal at the 52nd IFFI in Goa?
A) Night Forest (Germany)
B) Tiffin (India)
C) Lingui: The Sacred Bonds (Chad, France, Belgium, Germany)
D) Killing the Eunach Khan (Iran)
14. The world’s first floating city is proposed to be developed in which country?
A) Australia
B) France
C) Netherlands
D) South Korea
15. Which day has been declared by the UN to be observed as the Day of Remembrance for all Victims of Chemical Warfare?
A) November 29
B) November 30
C) Last Sunday of November
D) Last Monday of November
16. Who has recently been elected as the first woman president of the Indian Mountaineering Foundation (IMF)?
A) Malavath Purna
B) Santosh Yadav
C) Harshwanti Bisht
D) Premlata Agarwal
17. Which films have jointly won the Best Film Award at the 6th BRICS Film Festival?
A) Barakat and The Sun above Me Never Sets
B) On Wheels and Asuran
C) A Little Red Flower From China
D) The Silence Of The Rain
18. Which journalist has been honoured with the International Press Institute (IPI) India Award for Excellence in Journalism for 2020
A) Neha Dixit
B) Ritika Chopra
C) Shereen Bhan
D) Nidhi Razdan
19. Aifa Azman is the winner of the women’s single final title of 2021 Malaysian Open squash championship. She represented which country?
A) Bhutan
B) Nepal
C) India
D) Malaysia

1. C
According to Collins Dictionary recently NFT (non-fungible token) has been chosen as the word of the year 2021. According to Collins, the use of the term has increased by 11,000%. There is growing interest in digital tokens that can sell for millions of dollars. Collins defines it as “a unique digital certificate.
2. C
The drama film “Lingui, The Sacred Bonds” has recently won the ICFT-UNESCO Gandhi Medal at the 52nd edition of IFFI. It is an internationally co-produced drama film – a bold portrayal of women’s struggle and a lesson in humanity.
3. B
Former Chairman of State Bank of India Rajnish Kumar has recently been announced as an independent non-executive director on the board of Hero MotoCorp. He completed his three-year term as the chairman of SBI in October 2020.
4. A
According to the BrandZ India 2021 report released by Kantar Group media company, Amazon has topped the technology rankings. According to the report, Amazon, Tata Tea and Asian Paints have emerged as the most objective brands in India in the technology, FMCG and non-FMCG categories respectively.
5. C
Uttarakhand’s mountaineer Harshwanti Bisht has recently become the first woman president of the Mountaineering Foundation of India. He secured 60 votes out of a total of 107 votes to be elected to the coveted post. This Indian Mountaineering Foundation was established in the year 1958.
6. D
The Andhra Pradesh state assembly has recently passed the “Motor Vehicle Taxation (Amendment) Bill 2021” to levy green tax on vehicles. Recently, green tax will be imposed on all vehicles except motorcycles and auto-rickshaws in the state.
7. D
Indian Railways is recently constructing the world’s highest 111 km long bridge under the Jiribam-Imphal rail project in Manipur. Which this ambitious plan of the Railways will connect the capital Manipur with the country’s broad gauge network. In terms of height, this bridge will break the current record held by the Mala-Rijeka Viaduct (139 m) in Montenegro, Europe.
8. D
Ravichandran Ashwin has recently overtaken Harbhajan Singh to reach third place in terms of taking most wickets in Test cricket for India. He has taken 418 * wickets in 80 matches, now only Anil Kumble (619) and Kapil Dev (434) are ahead of him. Harbhajan Singh has taken 417 wickets in 103 Test matches for India.
9. D
Best Actor (Male) – Dhanush for Asuran (Hindi)
10. B
The Reserve Bank of India (RBI) has given its approval to Life Insurance Corporation (LIC) to raise its stake in private lender Kotak Mahindra Bank to 9.99 percent.
11. C
Petr Fiala has been sworn in as the new Prime Minister of the Czech Republic by President Milos Zeman on November 28, 2021.
12. A
The American publishing company Merriam-Webster has chosen the word “vaccine” as its 2021 Word of the Year.
13. C
The internationally co-produced drama film Lingui: The Sacred Bonds has won the ICFT-UNESCO Gandhi Medal at IFFI 52 in Goa.
14. D
South Korea is soon going to get the world’s first floating city, to deal with the problem of flood due to rising sea levels. The floating city project is a joint effort by the UN Human Settlement Programme (UN-Habit) and OCEANIX.
15. B
The United Nation recognised Day of Remembrance for all Victims of Chemical Warfare is held every year on November 30.
16. C
Noted mountaineer Harshwanti Bisht has been elected as the first woman president of the Indian Mountaineering Foundation (IMF).
17. A
Best Film – jointly shared by South African film ‘Barakat’ and Russian film ‘The Sun above Me Never Sets’
18. B
The IPI India Award for Excellence in Journalism 2020 had been awarded to Ritika Chopra of The Indian Express.
19. D
The women’s single title of the 2021 Malaysian Open squash championships has been won by Malaysia’s Aifa Azman.