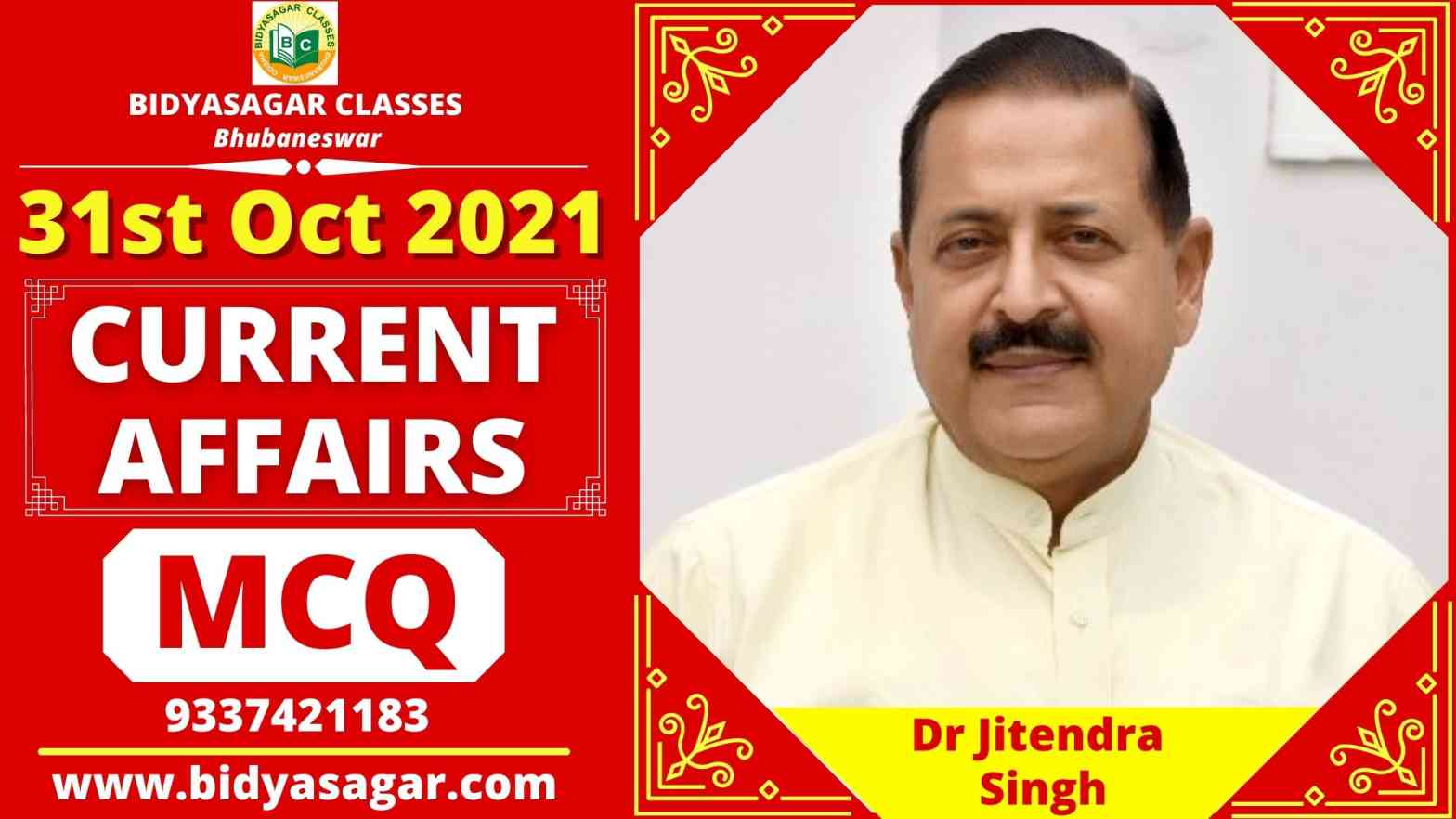 In this article, we will discuss MCQ on important current affairs of 31st October 2021 and their answers with explanations.

1. India’s biggest aromatic garden has been inaugurated in which of these place?
A) Gurgaon
B) Nainital
C) Jaipur
D) Pune
2. India’s First Manned Ocean Mission was officially inaugurated by Dr Jitendra Singhin Chennai. What is the name given to the mission?
A) Neernidhi
B) Sagaryan
C) Samudrayan
D) Sindhuyan
3. Which day of the year is celebrated as World Cities Day?
A) 28 October
B) 30 October
C) 29 October
D) 31 October
4. The National Commission for Women (NCW) has collaborated with which organization to launch Legal Awareness Program for Women, titled “Empowerment of Women through Legal Awareness”?
A) Central Vigilance Commission (CVC)
B) National Legal Services Authority (NALSA)
C) NITI Aayog
D) Competition Commission of India (CCI)
5. The National Small Matchbox Manufacturers Association has increased the price of Match boxes from Re.1 to Rs. 2 per box w.e.f from December 01, 2021. How many matchsticks will be there in Rs 2 matchbox??
A) 65
B) 36
C) 45
D) 50
6. Which country has recently unveiled the world’s largest hydrogen fuel cell power plant?
A) South Korea
B) Israel
C) Germany
D) Singapore
7. What is the interest rate on employees’ provident fund (EPF) deposits for 2020-2?
A) 6.1%
B) 7.4%
C) 8.5%
D) 8.1%
8. The Rashtriya Ekta Diwas (National Unity Day) is marked on which day in India?
A) 31 October
B) 30 October
C) 29 October
D) 28 October
9. Which financial institution has approved USD 250 million loan to support National Industrial Corridor Development Program (NICDP) in India?
A) World Bank
B) Asian Development Bank (ADB)
C) UNDP
D) Asian Infrastructure Investment Bank (AIIB)
10. Which player has won the 2021 MotoGP World Champion?
A) Fabio Quartararo
B) Francesco Bagnaia
C) Marc Márquez
D) Joan Mir
11. What is the theme of 2021 World Cities Day (WCD)?
A) Valuing Our Communities and Cities
B) Adapting cities for climate resilience
C) Better City, Better life
D) Building sustainable and resilient cities
12. Dr M Krishnan Nair who has passed away recently was one of the well known ___________
A) Surgeon
B) Anaesthetist
C) Pathologist
D) Oncologist
13. The Rashtriya Ekta Diwas is marked in India to mark the birth anniversary of which leader?
A) Sarvepalli Radhakrishnan
B) Sardar Vallabhbhai Patel
C) Subhas Chandra Bose
D) A. P. J. Abdul Kalam
14. What is the theme of the 2021 World Savings Day (formerly known as World Thrift Day?
A) Savings give life a lift
B) When you save a bit, big things follow
C) Understanding the Importance of Savings
D) What do you wish for?
15. According to the annual report released by NCRB, which state of India has ranked first in terms of suicide?
A) Madhya Pradesh
B) Gujarat
C) Karnataka
D) Maharashtra
16. In which state of India, famous actor Yusuf Hussain has passed away recently?
A) Kerala
B) Gujarat
C) Maharashtra
D) Punjab
17. DRDO and which Indian Army have successfully test-fired India’s first indigenous long-range bomb?
A) Indian Navy
B) Indian Air Force
C) NITI Aayog
D) None of these
18. The President of India Ram Nath Kovind has inaugurated a housing scheme for the economically weaker sections in which state?
A) Punjab
B) Maharashtra
C) Gujarat
D) Kerala
19. Which of the following ministry is organizing “Deep Dive Online Training Program”?
A) Ministry of Information and Broadcasting
B) Ministry of Textiles
C) Ministry of Electronics and Information Technology
D) Ministry of Tribals
20. Which of these organizations has released the report titled “State of the Climate in Asia”?
A) ISRO
B) DRDO
C) World Meteorological Organization
D) Moodies

1. B
The biggest aromatic garden of India has been unveiled at Lalkuan in Nainital district of Uttarakhand.The garden has been developed by the research wing of Uttarakhand forest department over an area of 3 acre.
2. C
The Union Minister of State (Independent Charge) Earth Sciences Dr Jitendra Singh officially launched India’s First Manned Ocean Mission called “Samudrayan project”at Chennai on October 29, 2021. The Unique Ocean Mission aims to have deep underwater manned vehicles for carrying out subsea activities. The deep water manned submersible has been code named as the ‘MATSYA 6000’.It is developed by Chennai-based National Institute of Ocean Technology (NIOT).
3. D
The United Nations designated World Cities Day (WCD) is marked every year on October 31.
4. B
The National Commission for Women (NCW) in collaboration with National Legal Services Authority (NALSA) has launched a Legal Awareness Program for Women, titled “Empowerment of Women through Legal Awareness”.
5. D
National Small Matchbox Manufacturers Association has increased the price of a matchbox from Re.1 to Rs. 2 per box. This will come into effect from December 01, 2021. However, with the increase in the price of matchboxes, the number of matchsticks in each box has also been increased from 36 matchsticks to 50 matchsticks.
6. A
The world’s largest hydrogen fuel cell power plant has been inaugurated at Seo-gu, Incheo in South Korea.
7. C
Ministry of Finance has approved the interest rate on employees’ provident fund (EPF) deposits for 2020-21 at 8.5%. The rate has been kept unchanged as for year 2019-20.
8. A
The Rashtriya Ekta Diwas is observed every year in India on October 31 since 2014.The day is marked to commemorate the birth anniversary of the Iron Man of India, Sardar Vallabhbhai Patel.2021 marks the 146th anniversary of the great leader.
9. B
The Asian Development Bank (ADB) has approved a USD 250 million (about Rs 1,875 crore) loan to support India’s National Industrial Corridor Development Program (NICDP). This is the first subprogram of the programmatic USD 500 million loan to develop 11 industrial corridors spanning 17 states.
10. A
Fabio Quartararo (From France) who rides for Yamaha has won the 2021 MotoGP World Champion title (Motorcycle).
11. B
2021 Theme of WCD is Adapting cities for climate resilience
12. D
Eminent oncologistDr M Krishnan Nair has passed away following age-related ailments. He was 81. Dr Nair was the founder-director of the Regional Cancer Centre (RCC) in Thiruvananthapuram.
13. B
Sardar Vallabhbhai Patel
14. C
The theme of World Savings Day 2021 is“Understanding the Importance of Savings”.
15. D
According to the annual report released by the National Crime Records Bureau (NCRB), Maharashtra ranks first in terms of suicide. According to the report, there has been an increase in suicide cases in 2020 as compared to 2019. In the year 2020, 1,53,052 cases of suicide i.e. an average of 418 cases have been registered daily.
16. D
Born in the year 1948 in Punjab, the famous actor Yusuf Hussain has recently passed away at the age of 73. He was often seen playing the role of father and grandfather. He was also a favorite of co-actors because of his friendly nature.
17. A
DRDO Indian Army have successfully test-fired India’s first indigenous long-range bomb LRB) has been successfully tested. The bomb is part of the range of weapons with a range of 50 to 150 km.
18. C
A housing scheme has been inaugurated by the President of India, Ram Nath Kovind, for the economically weaker sections in Bhavnagar, Gujarat. Shri Ram Nath Kovind is on a tour of Gujarat from 28th October to 30th October, 2021.
19. A
Ministry of Information and Broadcasting is organizing the program. The program is a part of a series of workshops organized by the National e-Governance Division under the Safe India initiative.
20. C
The World Meteorological Organization of the United Nations has recently released a report titled “State of the Climate in Asia”. According to which, in the year 2020, Asia has suffered its hottest year on record.