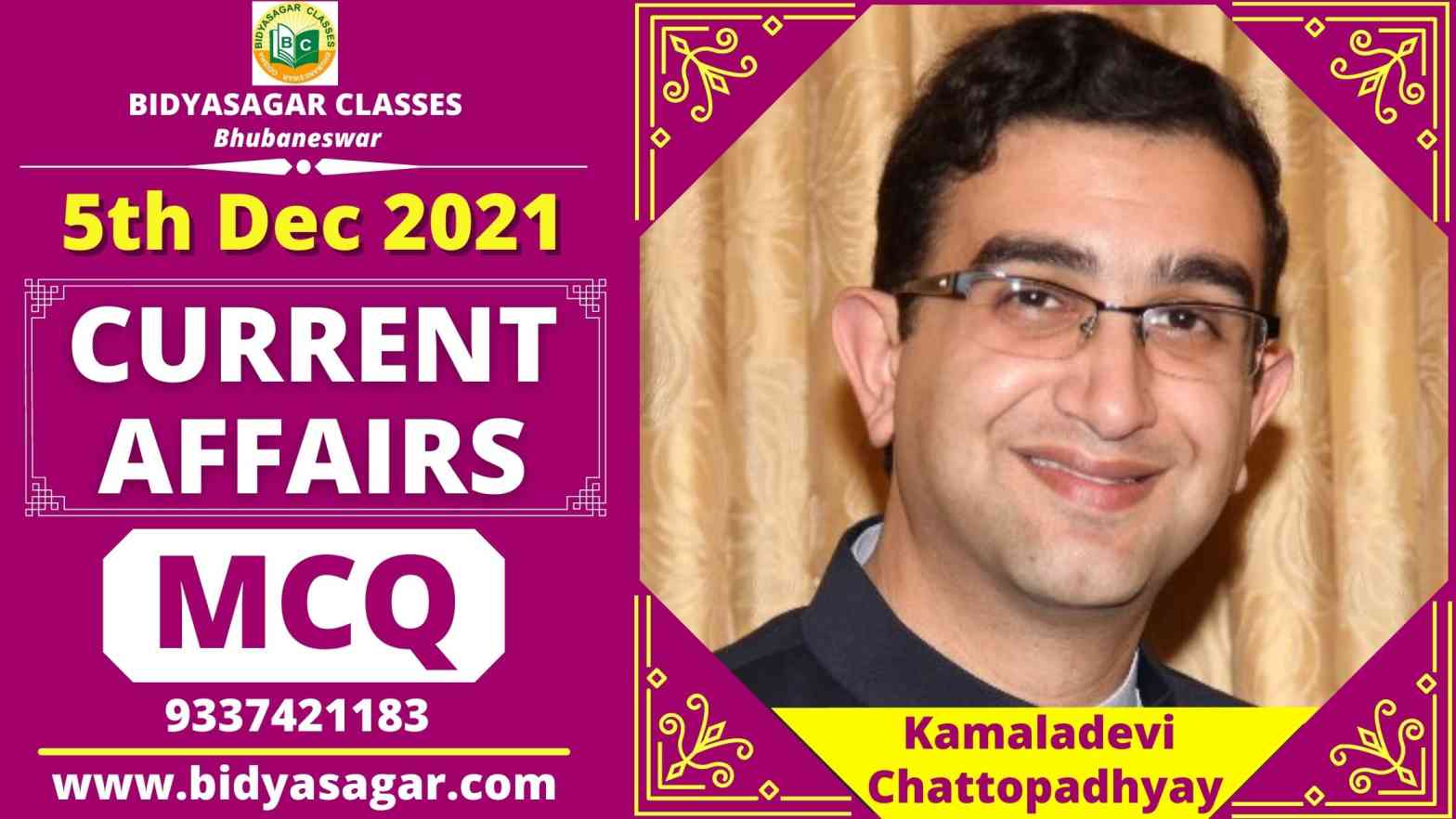 In this article, we will discuss MCQ on important current affairs of 4th December 2021 and their answers with explanations.

1. Recently, Pradip Shah, founder of IndAsia Fund Advisors, has been appointed chairman of NARCL. What is the full form of NARCL?
(a) National Asset Restructuring Company
(b) National Asset Reconstruction Company
(c) Non- Asset Reconstruction Company
(d) National Asset Reconstruction Corporation
2. According to a recent report, India will have _____________nuclear reactors by 2024.
(a) 5
(b) 6
(c) 7
(d) 9
3. Assam’s highest civilian award was conferred on Ratan Tata for his contribution to which of the following services?
(a) Cancer care
(b) Steel Project
(c) Motor Service
(d) Air Service
4. How much loan has been approved by the ADB to help the government of India to improve the quality of the country’s school education?
(a) $ 100 million
(b) $ 250 million
(c) $ 500 million
(d) $ 300 million
5. Which company has been ranked ‘number one Cooperative’ in the world in the 2021 edition of the 10th Annual World Cooperative Monitor (WCM) report?
(a) ONGC
(b) NFL
(c) GSFC
(d) IFFCO
6. OECD has projected India’s economic growth forecast at _________ for FY22.
(a) 8.7%
(b) 8.9%
(c) 9.4%
(d) 9.9%
7. Which bank has recently listed its USD 650-million green bonds simultaneously on the India International Exchange (India INX) and the Luxembourg Stock Exchange (LuxSE)?
(a) Dhanlaxmi Bank
(b) Bandhan Bank
(c) IndusInd Bank
(d) State Bank of India
8. Who has been appointed as the new Deputy Managing Director of International Monetary Fund (IMF)?
(a) Anshula Kant
(b) Gita Gopinath
(c) Geoffrey Okamoto
(d) KV Kamath
9. In India, _______ is observed as the National Navy Day every year, to celebrate the achievements and role of the naval force to the country.
(a) December 1
(b) December 2
(c) December 3
(d) December 4
10. Earth Station of Doordarshan Kendra inaugurated in ________.
(a) Gorakhpur
(b) Kanpur
(c) Dehradun
(d) Nainital
11. After Covaccine, ZyCov-D, the second indigenous vaccine, has been recently launched in how many states of India?
(a) 3 states
(b) 5 states
(c) 7 states
(d) 15 states
12. Face recognition scanning has been announced in airports of India from which year?
(a) 2021
(b) 2022
(c) 2023
(d) 2024
13. Recently how many heritage awards have been given by UNESCO for Nizamuddin Basti Project?
(a) 2 Legacy Awards
(b) 4 Legacy Awards
(c) 6 Legacy Awards
(d) 8 Heritage Awards
14. Who is the author of “Naoroji: Pioneer of Indian Nationalism” who has won the NIF Book Prize 2021?
(a) Chetan Bhagat
(b) Kamaladevi Chattopadhyay
(c) Arundhati Bhattacharya
(d) Anshul Mishra
15. How many satellites has SpaceX launched recently? Who will be included in the Starlink Mega Constellation?
(a) 20 satellites
(b) 35 satellite
(c) 50 satellites
(d) 65 satellite
16. Recently astronomers have discovered GJ 367b, what is it?
(a) Blackhole
(b) Planet
(c) satellite
(d) Galaxy

1. B
Pradip Shah, founder of IndAsia Fund Advisors, has been appointed chairman of National Asset Reconstruction Company (NARCL).
2. D
The nation will have nine nuclear reactors by 2024 and a new nuclear project, the first in northern India, will come up 150 kms away from Delhi in Gorakhpur of Haryana, the government informed the Rajya Sabha.
3. A
On the occasion of Assam Divas, the state government of Assam has decided to accolade renowned industrialist Ratan Tata with the ‘Asom Bhaibav’ award, the highest civilian state award for his contribution to cancer care in the state.
4. C
ADB has approved USD 500 million (about Rs 3,752 crore) loan to help the government of India improve the quality of the country’s school education and mitigate the impact of the COVID-19 pandemic on students’ learning.
5. D
The Indian Farmers Fertiliser Cooperative Limited (IFFCO) has been ranked ‘number one Cooperative’ among the top 300 cooperatives in the world in the 2021 edition of the 10th Annual World Cooperative Monitor (WCM) report, withholding its position from 2020 edition.
6. C
Paris-based Organisation for Economic Co-operation and Development (OECD) decreased India’s growth forecast to 9.4% for FY22 from 9.7% estimated in September 2021.
7. D
State Bank of India (SBI) listed its USD 650-million green bonds simultaneously on the India International Exchange (India INX) and the Luxembourg Stock Exchange (LuxSE).
8. B
International Monetary Fund (IMF) Chief Economist, Gita Gopinath is set to take over as the institution’s No. 2 official.
9. D
In India, December 4 is observed as the National Navy Day every year, to celebrate the achievements and role of the naval force to the country.
10. A
Union Minister of Information and Broadcasting Anurag Singh Thakur and Uttar Pradesh Chief Minister Yogi Adityanath inaugurated Earth Station of Doordarshan Kendra at Gorakhpur.
11. C
ZyCov-D is the second indigenous vaccine after 7 states – Covaccine which was recently introduced in 7 states of India (Tamil Nadu, Bihar, Maharashtra, Jharkhand, Punjab, West Bengal). and Uttar Pradesh). This vaccine is to be given only to persons in the age group of 12 to 19 years. ZyCov-D is applied using a needle-free applicator.
12. B
Passengers in airports of India can also use face scan as their boarding pass from the year 2022. It has been announced to start face recognition scanning from the year 2022. The first airports to start this facility are Kolkata, Pune, Varanasi and Vijayawada. NEC Corporation Pvt Ltd has been selected by the Airports Authority of India to implement this project.
13. A
Recently UNESCO has given 2 Heritage Awards (Sustainable Award and Excellence Award) for the Nizamuddin Basti project. The project was awarded for its conservation efforts. The project restored more than 20 historical monuments located around the 14th century Sufi saint Hazrat Nizamuddin Auliya.
14. B
The author of “Naoroji: Pioneer of Indian Nationalism” Kamaladevi Chattopadhyay has recently been awarded the NIF Book Prize 2021. This book is a biography of 19th century leader Naoroji,
15. C
SpaceX has recently launched 50 satellites (48 Starlink satellites and two earth observation satellites named BlackSky Global). Which will be included in the Starlink Mega Constellation. These satellites were launched on a Falcon 9 rocket. Out of which BlackSky Global is building a satellite constellation.
16. B
Recently astronomers have discovered GJ 367b which is an ultra short planet orbiting a dim red dwarf star. It is a rocky planet. It is 70% of the size of Earth. And it is 55% of the mass of the Earth. This makes GJ 367b one of the lightest known extraterrestrials.