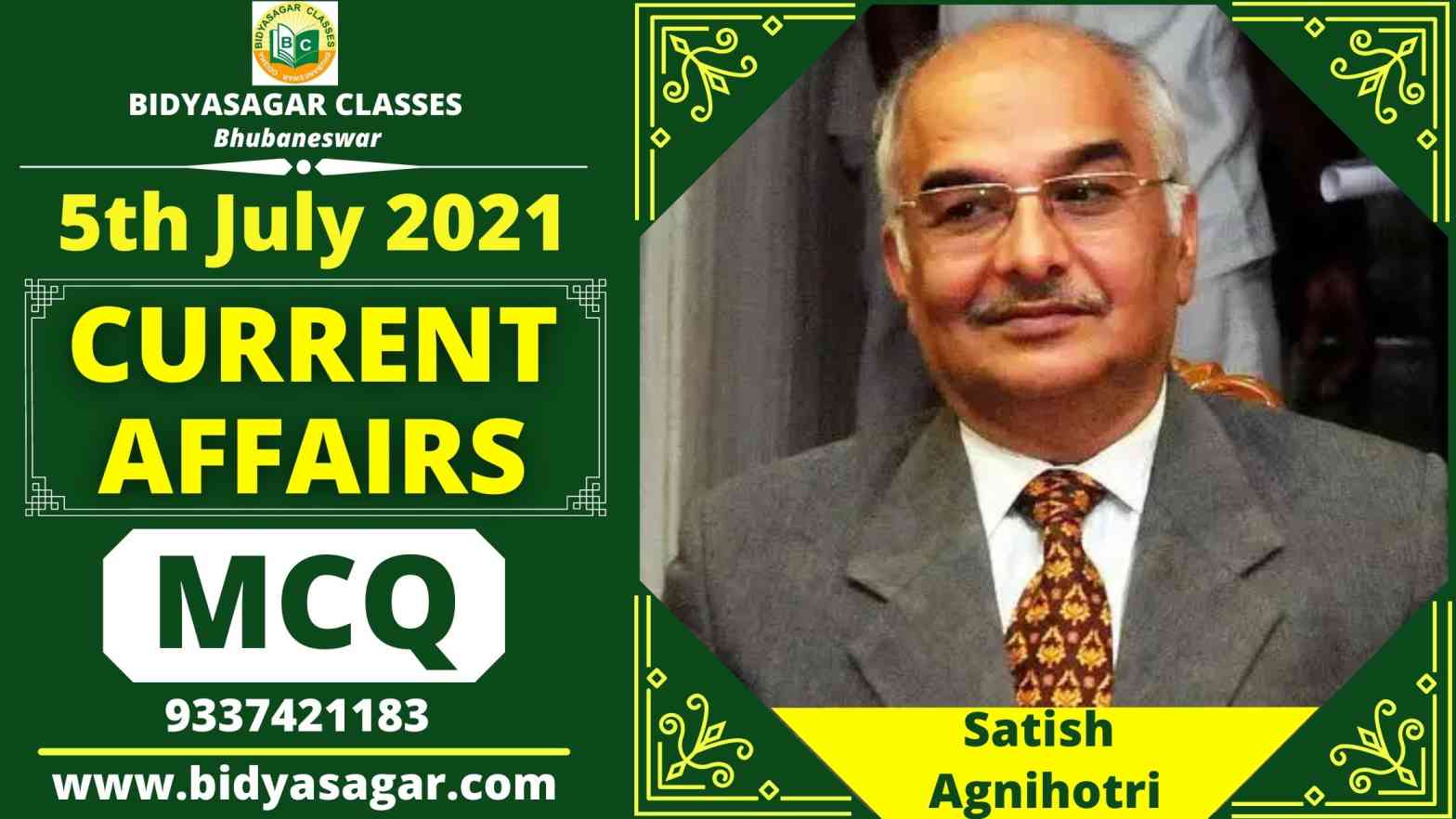 In this article, we will discuss MCQ on important current affairs of 5th July 2021 and their answers with explanations.

1. Who has been appointed as the new Managing Director of National High Speed Rail Corporation?

2. Who has been appointed as the new Chairman and MD of NEDFi?

4. Which bank has recently become the 2nd most valued among the listed Public Sector Bank?

5. Which Indian vaccine has been added to the ‘Green Passport’ of 9 European countries?

6. What is the reason behind the occurrence of intense heat waves in Canada and USA?

7. Who has become the 1st female swimmer to qualify for Tokyo Olympics 2021?

9. Government of India has announced that Retail and Wholesale trades will now be included in ________.

12. Recently who has started a project named “BOLD” to reduce desertification and provide livelihood?

A. Khadi and Village Industries Commission

15. Who among the following has been appointed as the new Managing Director of National High Speed ​​Rail Corporation Limited recently?

16. Uttar Pradesh government has sent a proposal to the Ministry of Railways to rename which railway station after Rani Laxmibai?

17. How many technology innovation Platforms have been launched by the central government recently?

18. NASA’s NEOWISE telescope recently got a mission extension of how many Years?

1. A
Satish Agnihotri has been appointed as the new Managing Director of National High Speed Rail Corporation. He had previously served as the Managing Director of RVNL.
2. D
PVSLN Murty has been appointed as the new Chairman and Managing Director of North Eastern Development Finance Corporation Ltd (NEDFi). He was previously serving as the Chief Strategy Officer at SBI.
3. C
RBI has imposed a penalty of INR 25 lakh on Punjab & Sind Bank. The bank has been fined for non-compliance with the provisions of directions related to ‘Cyber Security Framework in Banks’.
4. B
Indian Overseas Bank (IOB) has recently become the 2nd most valued among the listed Public Sector Bank (PSB). IOB has crossed the market capitalization of INR 50,000 crores.
5. B
COVISHIELD has been added to the ‘Green Passport’ of 9 European countries. This will give permission to the individuals vaccinated by COVISHIELD to travel to those countries by simply showing their vaccination certificates.
6. D
At atmospheric phenomenon called ‘Heat Dome’ is responsible for the occurrence of intense heat waves in Canada and USA. It is causing casualties in North America due to the scorching heat.
7. C
Manna Patel has become the 1st female swimmer to qualify for Tokyo Olympics 2021. After qualifying for the Tokyo Olympics via Universality quota, she has also become the 3rd swimmer of the Indian swimming contingent.
8. B
Medals of Tokyo Olympics will be made up of recycled electronic wastes. The metals like gold and silver for the medals will be obtained from discarded smartphones and laptops.
9. A
Government of India has announced that Retail and Wholesale trades will now be included in Micro, Small and Medium Enterprises (MSMEs). This move will benefit around 2.5 crore retail and wholesale traders.
10. D
Indian Men’s and Women’s Hockey Team has secured 4th rank in the 10th FIH Rankings. Australia topped the men’s rankings whereas Netherlands topped in the women’s rankings.
11. D
Union Tribal Affairs Minister Shri Arjun Munda has recently laid the foundation stone for the construction of 5 Eklavya Model Residential Schools in the state of Jharkhand. He has also laid the foundation stone of Eklavya schools in Hatgamharia and Mazgaon blocks of West Singhbhum. He has said that this will facilitate archery game in all Eklavya Adarsh Vidyalayas of Jharkhand.
12. A
Khadi and Village Industries Commission has recently launched a multi-purpose village industry support “BOLD” (Bamboo Desert-Garden on dry land area) to reduce desertification and provide livelihood. ) project is launched. With this scheme, income of tribals and bamboo based economy will be boosted in Rajasthan.
13. C
Minister of State for Chemicals & Fertilizers and Ports, Shipping and Waterways Shri Mansukh Mandaviya recently visited ZYCOV-D Vaccine Manufacturing Plant. This vaccine is being developed by Zydus. This will be the world’s first DNA-based Covid-19 vaccine.
14. A
Government of India’s free telemedicine service “e-Sanjeevani” has recently completed 70 lakhs consultations. With more than 50 thousand daily consultations in the last 2 weeks, about 12.50 lakh patients have benefited from this national telemedicine service in the last 30 days.
15. C
Retired Officer Satish Agnihotri has been recently appointed as the new Managing Director of National High Speed Rail Corporation Limited. His tenure will be of 3 Years. He is a 1982 batch IRSE and he retired in 2018 as the head of Rail Vikas Nigam Limited.
16. D
The Uttar Pradesh government has recently sent a proposal to the Ministry of Railways to rename Jhansi railway station after Rani Laxmibai. Whereas before this, the Uttar Pradesh government has transferred Allahabad to Prayagraj, Mughalsarai to Deen Dayal Upadhyay Nagar and Faizabad to Ayodhya.
17. B
The Ministry of Heavy Industries and Public Enterprises in the Central Government has recently launched 6 Technology Innovation Platforms. These technology Platforms will focus on developing technologies for globally competitive manufacturing across India.
18. A
The US space agency NASA’s NEOWISE (Near-Earth Object Wide-field Infrared Survey Explorer) telescope recently got a mission extension of 2 Years. This telescope will continue its search for asteroids, comets and objects. This Near-Earth Object Hunting Space Telescope will continue to operate till June 2023.