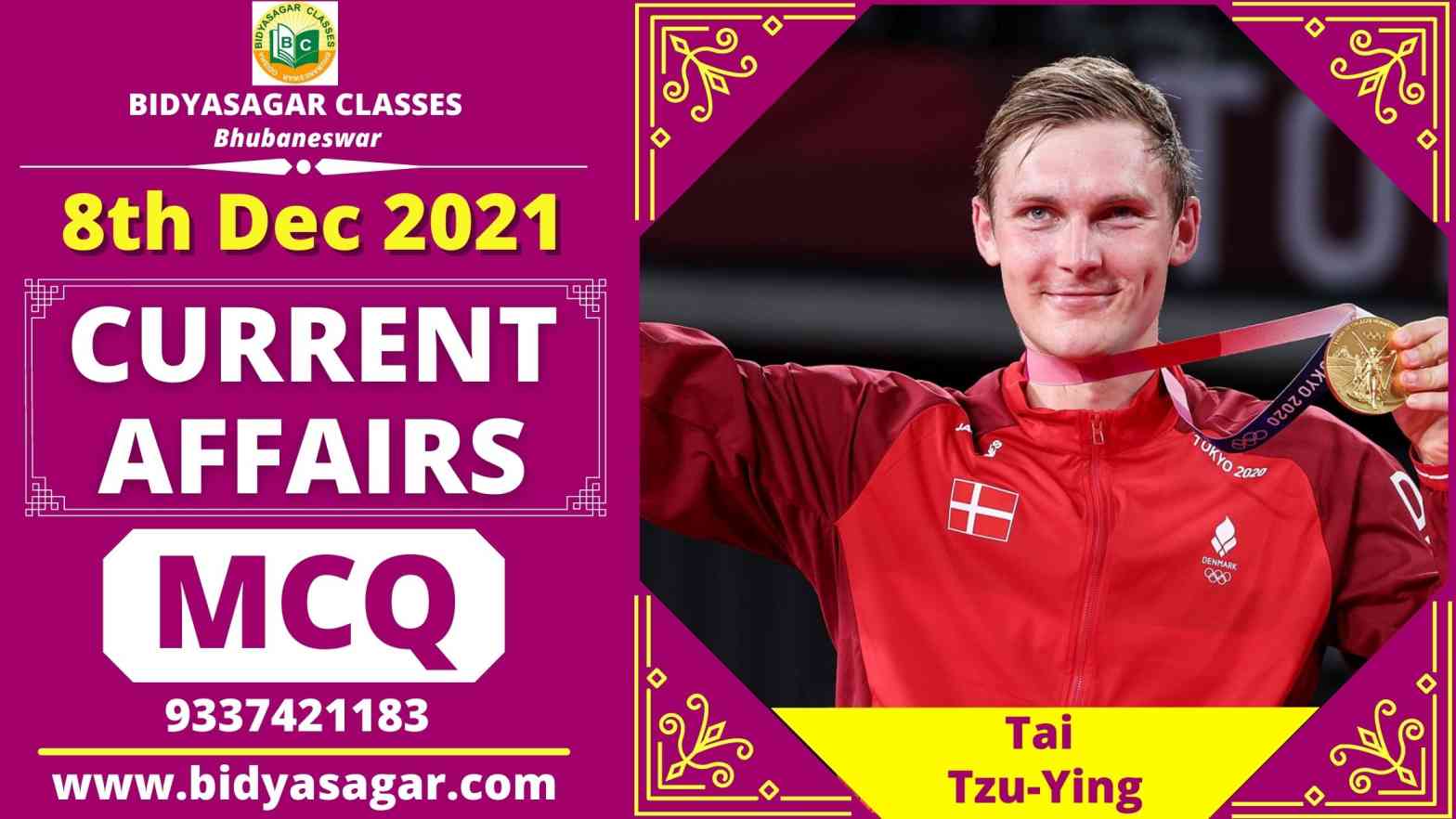 In this article, we will discuss MCQ on important current affairs of 8th December 2021 and their answers with explanations.

1. Who was honoured with the 56th Jnanpith Award?
a) Nilmani Phookan
b) Damodar Mauzo
c) Amitav Ghosh
d) Krishna Sobti
2. As per a new study, the coral reefs in Western Indian Ocean can possibly extinct by which year?
a) 2070
b) 2050
c) 2030
d) 2090
3. Which among the following is one of the key reasons for the destruction of coral reefs?
a) Overfishing
b) Overmining
c) Glacier melting
d) Maritime exercises
4. Which nation has announced a 4.5-day work week?
a) Saudi Arabia
b) Oman
c) UAE
d) Bahrain
5. Who is the commander-in-chief of the Indian Armed Forces?
a) President of India
b) Defence Minister
c) Prime Minister
d) Chief of Defence Staff
6. Which nation has become the 2nd one to boycott 2022 Beijing Winter Olympics?
a) India
b) Japan
c) France
d) Australia
7. Section 144 has been imposed in which among the following cities till January 15?
a) New Delhi
b) Lucknow
c) Ghaziabad
d) Noida
8. Which former Chief Election Commissioner of India has been included in the advisory board of International Institute for Democracy and Electoral Assistance?
a) Ajay Singh Makhan
b) Sunil Chandra
c) Ashok Lavar
d) Sunil Arora
9. OYO Hotels and Homes has recently appointed former chairman of which bank Rajnish Kumar as strategic group advisor?
a) Punjab National Bank
b) Bank of Baroda
c) State Bank Of India
d) Canara Bank
10. Which of the following bank has recently launched India’s first standalone metal debit card?
a) Canara Bank
b) IDFC First Bank
c) Bank of Baroda
d) Yes Bank
11. According to RBI data, which state has overtaken Maharashtra to become India’s largest manufacturing hub?
a) Karnataka
b) Kerala
c) Gujarat
d) Punjab
12. Kinara Capital has appointed which sportsperson as its official brand ambassador on the occasion of 10th anniversary?
a) Rohit Sharma
b) Ravindra Jadeja
c) Virat Kohli
d) Hardik Pandya
13. Indian-American mathematician, Nikhil Srivastava, who teaches at which US university, has been selected for the AMS’s Cipriani Foyce Award?
a) University of Washington
b) University of California
c) University of Texas
d) Harvard University
14. Which female player has won the BWF World Tour 2021?
a) Saina Nehwal
b) PV Indus
c) Simon Halep
d) seong
15. Nobel peace prize winner Myanmar politician “Aung San Suu Kyi” has been sentenced to how many years’ imprisonment?
a) 2 years
b) 4 years
c) 6 years
d) 8 years
16. Which of the following country’s players Viktor Axelsen and Taipei’s Tai Tzu-Ying of China have been selected as the men’s and women’s players of the year 2021 by the Badminton World Federation?
a) Australia
b) Russia
c) Denmark
d) Maldives

1. A
Eminent Assamese Poet Nilmani Phookan Jr. has been honoured with the 56th Jnanpith Award. He has been awarded for his outstanding contribution to literature. This is the third time that Assam has received Jnanpith Award. Before Nilmani Phookan, Birendra Kumar Bhattacharya was honoured with the award in 1979 and Mamoni Raisom Goswami was awarded in 2000.
2. A
Most of the coral reefs in the western Indian Ocean face a high risk of extinction in the next 50 years due to global warming and overfishing, as per a new study. The study conducted by a group of researchers claims that coral reefs from Seychelles to South Africa might become functionally extinct by 2070.
3. A
In a new study, researchers had analysed the health of coral reefs in 10 countries in the neighbouring areas of the western Indian ocean and the analysis revealed that the coral reefs, especially those in the island nations are in grave danger due to overfishing and the increase in temperature of the water due to global warming.
4. C
The United Arab Emirates announced all government entities will adopt a new work-week schedule consisting of four-and-a-half days with Friday afternoon, Saturday and Sunday forming the new weekend.
5. A
The President of India is the ceremonial head of state of India and commander-in-chief of the Indian Armed Forces. Ram Nath Kovind is the 14th President of India.
6. D
After US, Australia has announced a diplomatic boycott of the 2022 Beijing Winter Olympics over concerns about human rights abuses in Xinjiang, particularly against the Uyghur minority community. Australian Prime Minister Scott Morrison said that the decision should come as “no surprise” that their diplomats and politicians would boycott the event.
7. B
The Lucknow Police has invoked Section 144 CrpC in Lucknow district from December 7-January 5, 2022. The law has been imposed in the wake of Christmas and New Year’s celebrations amid the Covid-19 threat and protest declared by various farmers’ organisations.
8. D
Former Chief Election Commissioner of India Sunil Arora has recently been included in the advisory board of International Institute for Democracy and Electoral Assistance. Sunil Arora served as the 23rd Chief Election Commissioner of India from December 2018 to April 2021.
9. C
Former Chairman of State Bank of India Rajnish Kumar has recently been appointed as its Strategic Group Advisor by OYO Hotels & Homes. He has been appointed to advise the company’s management on short-term and long-term strategy, regulatory and stakeholder engagement, and growing the company’s brand globally.
10. B
IDFC First Bank recently launched India’s first standalone metal debit card “First Private Infinite” in partnership with Visa. Which is a Lifetime Free Card specially designed for those customers.
11. C
According to RBI data, Gujarat has overtaken Maharashtra to become the largest manufacturing hub of India. According to the data, Gujarat’s Gross Value Added (GVA) in the manufacturing sector has grown by 15.9 per cent annually to Rs 5.11 lakh crore from FY 2012 to 2020.
12. B
India’s MSME lending service Kinara Capital recently appointed Indian cricketer Ravindra Jadeja as its official brand ambassador on the occasion of its 10th anniversary. Kinara Capital has disbursed 70,000 collateral-free loans.
13. B
Nikhil Srivastava, an Indian-American mathematician who taught at the University of California, USA, along with Adam Marcus and Daniel Spielman, was awarded the first Cipriani in Operator Theory by the American Mathematical Society. Foyce Award. The award recognizes his highly original work.
14. D
India’s PV in the final of BWF World Tour 2021. Seong of Korea has won this title by defeating Sindhu. While in men’s singles of BWF World Tour 2021, Viktor Axelsen has won the cup. The World Tour is a Grade 2 badminton tournament series organized by the Badminton World Federation.
15. B
Nobel Peace Prize-winning Myanmar politician “Aung San Suu Kyi” was recently arrested by a special Myanmar court for violating coronavirus restrictions. Has been sentenced to 4 years imprisonment. Aung San Suu Kyi served as Myanmar’s State Counselor between 2016 and 2021.
16. C
Denmark’s Viktor Axelsen and Taipei’s Tai Tzu-Ying of China have been selected as the men’s and women’s players of the year 2021 by the Badminton World Federation.