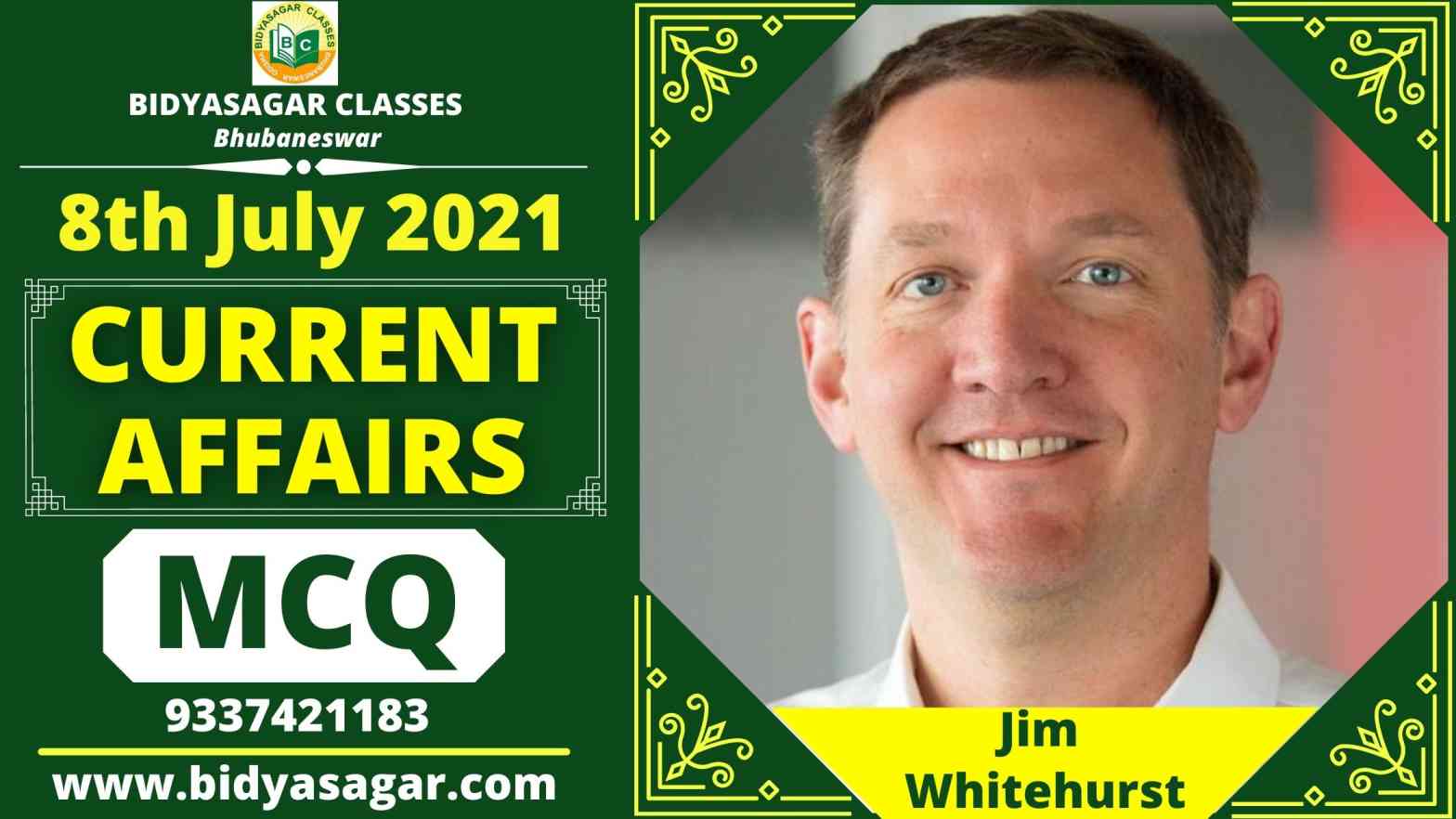 In this article, we will discuss MCQ on important current affairs of 8th July 2021 and their answers with explanations.

1. What was the Revenue collected from Goods and Services Tax (GST) in June?
A. Rs 1.04 lakh crore
B. Rs 99,567 crore
C. Rs 1.06 lakh crore
D. Rs 92,849 crore
2. Who has been appointed as the governor of Goa?
A. PS Sreedharan Pillai
B. Bandaru Dattatreya
C. Satyadev Narayan Arya
D. Ramesh Bais
3. Who becomes “Brand Ambassador” of Khadi Prakritk Paint?
A. Kumar Sanu
B. Baba Ramdev
C. Narendra Modi
D. Nitin Gadkari
4. Bandaru Dattatraya has been appointed as the governor of which state?
A. Uttar Pradesh
B. Haryana
C. Madhya Pradesh
D. Punjab
5. Who has been appointed as the CEO of Waze, a crowd-sourced GPS navigation app and a subsidiary of tech giant Google?
A. Rajni Sharma
B. Sunita Kumari
C. Rashmi Desai
D. Neha Parikh
6. Who has been appointed as the governor of Karnataka?
A. Hari Babu Kambhampati
B. Mangubhai Chhaganbhai Patel
C. Rajendra Vishwanath Arlekar
D. Thawarchand Gehlot
7. Which of the following payment app has announced the launch of Postpaid Mini to provide small-ticket instant loans?
A. MobiKwik
B. Phonepe
C. Paytm
D. Airtel Payment Bank
8. Richard Donner passed away recently. He was a/an _____________.
A. Filmmaker
B. Cricketer
C. Cinematographer
D. Music Composer
9. The Ministry of Tourism has signed a Memorandum of Understanding (MoU) with which entity to strengthen the country’s hospitality and tourism industry?
A. MakeMyTrip
B. Cleartrip
C. Yatra
D. EasyMyTrip
10. Who has announced his resignation as the president of IBM?
A. David N. Farr
B. Michael L. Eskew
C. Thomas Buberl
D. Jim Whitehurst
11. Who among the following has launched the Online Course Mobile App “Matsya Setu” for Indian aqua farmers?
A. Raj Nath Singh
B. Giriraj Singh
C. Amit Shah
D. Nitin Jairam Gadkari
12. Which of the following city to get India’s second-largest cricket stadium?
A. Mumbai
B. Dehradun
C. Jaipur
D. Bengaluru
13. Satyadev Narayan Arya has been appointed as the governor of which state?
A. Tripura
B. Goa
C. Uttarakhand
D. West Bengal
14. How many members are set up by DPIIT to curb Digital Monopolies?
A. 6
B. 7
C. 8
D. 9
15. The Calcutta High Court has recently imposed a fine of how many Lakh rupees on Chief Minister Mamata Banerjee?
A. Rs 2 Lakh
B. Rs 3 Lakh
C. Rs 4 Lakh
D. Rs 5 Lakh
16. Prime Minister Narendra Modi has recently created which new ministry before his cabinet expansion?
A. Security Check
B. Ministry of Cooperation
C. Country Defense
D. Science Education
17. In which state will the International Film Festival of India 2021 be organized from November 20 to November 28?
A. Kerala
B. Delhi
C. Gujarat
D. Goa
18. Which of the following ministry has recently approved Ramgarh Vishdhari Sanctuary as the fourth tiger reserve in Rajasthan?
A. Ministry of Sports
B. Ministry of Education
C. Ministry of Women and Child Development
D. Ministry of Environment, Forest and Climate Change
19. The Trinamool Congress government led by Mamata Banerjee has passed a resolution to form a Legislative Council under which Article of the Constitution?
A. Article 123
B. Article 135
C. article 169
D. Article 184
20. Which country’s State Department has recently released the Persons Trafficking Report 2021?
A. America
B. Japan
C. China
D. Australia

1. D
Centre mopped up Rs 92,849 crore GST for the month of June of which CGST is Rs 16,424 crore, SGST is Rs 20,397 crore, IGST is Rs 49,079 crore (including Rs 25,762 crore collected on import of goods) and Cess is Rs 6,949 crore (including Rs 809 crore collected on import of goods)
2. A
P. S. Sreedharan Pillai is an Indian politician, attorney, and author, who is currently serving as the 19th Governor of Goa state.
3. D
The Union Minister for Road Transport and Highways & MSME, Nitin Gadkari, virtually inaugurated India’s first and only paint made from cow dung, under the brand name ‘Khadi Prakritk Paint’.
4. B
Bandaru Dattatreya is an Indian politician serving as the current Governor of the State of Haryana since 2021. He was the Member of Lok Sabha for Secunderabad from 2014 to 2019.
5. D
Indian-American, Neha Parikh, has been appointed as the CEO of Waze, a crowd-sourced GPS navigation app and a subsidiary of tech giant Google.
6. D
Thaawar Chand Gehlot is an Indian politician who is the current and 19th Governor of Karnataka from 6 July 2021.
7. C
Paytm has announced the launch of Postpaid Mini, small-ticket loans that will give users the flexibility to access loans ranging from Rs 250 – Rs 1,000, in partnership with Aditya Birla Finance Ltd.
8. A
Richard Donner passing away, and instantly flashed back to the great entertainers that he had made. The 91-year-old filmmaker was at the forefront of some of the most popular genres in the history of mainstream cinema: the superhero movie, the horror flick, the buddy cop romps.
9. C
The tourism ministry signed a Memorandum of Understanding (MoU) with Yatra to strengthen and enable the tourism and hospitality industry.
10. D
Jim Whitehurst has announced he is stepping down as the president of IBM. Whitehurst’s resignation is being seen as one of the several management moves IBM announced.
11. B
Union Minister for Fisheries, Animal Husbandry and Dairying, Giriraj Singh has launched the Online Course Mobile App “Matsya Setu”.
12. C
The Board of Control for Cricket in India (BCCI) released a financial grant of Rs 100 crore to the Rajasthan Cricket Association (RCA), which will be used to build India’s second-largest cricket stadium. The facility, which will be second to the recently inaugurated Narendra Modi Stadium in Ahmedabad, is set to be built in Jaipur.
13. A
Satyadev Narayan Arya is the current and 19th Governor of Tripura.
14. D
The nine-member committee of Open Network for Digital Commerce (ONDC) will advise the Government of India on measures needed to digitise the entire value chain, standardise operations, promote inclusion of suppliers, derive efficiencies in logistics and enhance value for consumers, among other things.
15. D
The Calcutta High Court recently imposed a fine of Rs 5 Lakh on Chief Minister Mamata Banerjee for accusing Justice Chanda of having links with the BJP. Mamta had demanded the removal of the hearing of a petition related to the election from the bench of Justice Kaushik Chanda. The court has said in its decision that Mamta has tried to tarnish the image of the judiciary.
16. B
Prime Minister Narendra Modi recently made the Ministry of Cooperation a new ministry before his cabinet expansion. Through this ministry, his Modi government will realize the vision of “Sahakar se prosperity”. This ministry will provide a separate administrative, legal and policy framework to strengthen the cooperative movement in the country.
17. D
International Film Festival of India 2021 will be organized in Goa from November 20 to November 28. The 52nd International Film Festival will be organized by DFF, Ministry of Information and Broadcasting in association with the State Government of Goa and the Indian Film Industry.
18. D
Ministry of Environment, Forest and Climate Change has recently approved Ramgarh Vishdhari Sanctuary as the fourth tiger reserve in Rajasthan. After this approval, this sanctuary will connect Ranthambore Tiger Reserve in the northeast with Mukundra Hills Tiger Reserve in the southern part of Rajasthan.
19. C
The Mamata Banerjee-led Trinamool Congress government in West Bengal has recently passed a resolution to form a Legislative Council under Article 169 of the Constitution. A resolution was passed in the state assembly on July 6, 2021 for the creation of the Legislative Council.
20. A
Recently the Persons Trafficking Report 2021 has been released by the America State Department. According to which, the Kovid-19 epidemic has increased susceptibility to human trafficking. According to this report, India does not meet the minimum standards to eliminate smuggling. But the government has made significant efforts.