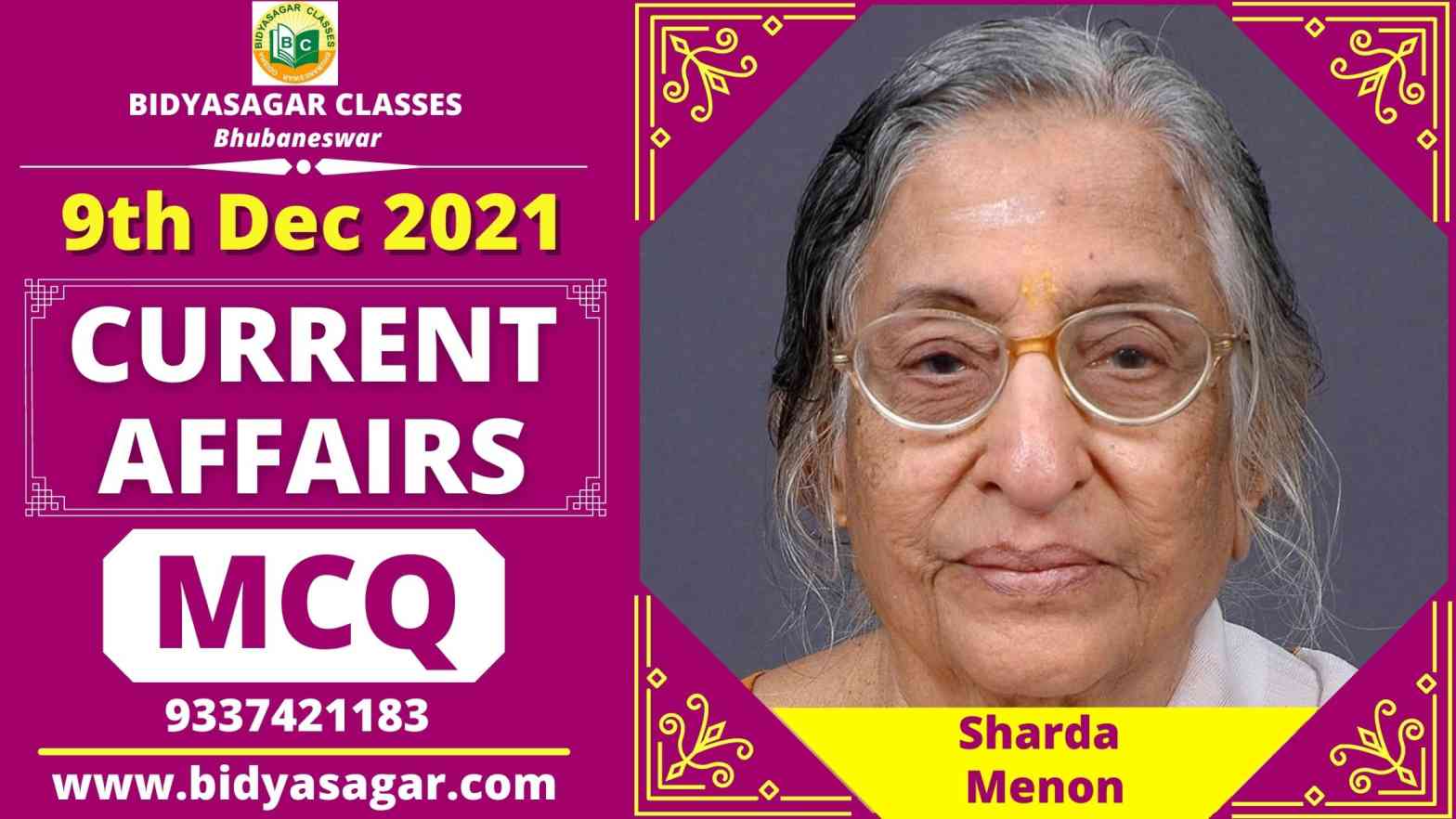 In this article, we will discuss MCQ on important current affairs of 9th December 2021 and their answers with explanations.

1. Which nation has been removed from India’s ‘at-risk’ nations list?
a) Singapore
b) New Zealand
c) Israel
d) United Kingdom
2. Who has become India’s new ODI captain?
a) Rohit Sharma
b) Ajinkya Rahane
c) KL Rahul
d) Shikhar Dhawan
3. When is International anti-corruption day?
a) December 7th
b) December 8th
c) December 9th
d) December 10th
4. Who was the most-searched person on Google in India 2021?
a) Neeraj Chopra
b) Aryan Khan
c) Shehnaaz Gill
d) Elon Musk
5. Which among the following events was trending overall in 2021?
a) IPL
b) CoWIN
c) ICC T20 World Cup
d) Tokyo Olympics
6. The Union Cabinet chaired by PM Modi has approved interlinking projects on which two rivers?
a) Satluj-Ravi
b) Indus-Satluj
c) Narmada-Godavari
d) Ken-Betwa
7. Which country’s health authority has authorised AstraZeneca’s Evusheld for pre-exposure prevention of COVID-19?
a) UK
b) India
c) Australia
d) US
8. India’s first female psychiatrist Sharda Menon has passed away recently, she was honored with which award?
a) Padma Shri
b) Padma Vibhushan
c) Bharat Ratna
d) Padma Bhushan
9. Which of the following bank has launched “PNB Pride-CRMD Module” app for disabled employees?
a) State Bank Of India
b) Punjab National Bank
c) Bank of Baroda
d) Canara Bank
10. Which of the following commission has launched “She is a Changemaker” program?
a) NITI Aayog
b) Education Commission
c) Planning Commission
d) National Commission for Women
11. What place has India reached in the year 2020 in terms of export of food export goods to Arab countries?
a) First
b) Third
c) Fourth
d) Fifth
12. Eminent Assamese poet Nilamani Phukan Jr. has been conferred with which Jnanpith Award recently?
a) 56th
b) 57th
c) 58th
d) 59th
13. India’s DRDO has successfully test-fired a “Vertical Launch-Short Range Surface-to-Air Missile” from the Integrated Test Range at Chandipur, off the coast of which state?
a) Kerala
b) Gujarat
c) Maharashtra
d) Odisha
14. Which of the following space agency has selected Indian-origin doctor Anil Menon for its future space missions?
a) NASA
b) ISRO
c) Christ
d) Space X
15. Which company’s chairman and managing director Sanjiv Mehta has been appointed as the next chairman of FICCI?
a) Kotak
b) Hindustan Unilever
c) Nestle
d) Adani Group
16. Researchers have discovered the first dinosaur species to live 214 million years ago at which of the following places?
a) England
b) New Zealand
c) India
d) Greenland

1. A
India has removed Singapore from its list of “at-risk” nations. The countries that are currently in the list include South Africa, Botswana, Ghana, Mauritius, Tanzania, Zimbabwe, New Zealand, Hong Kong, Israel, the United Kingdom and China.
2. A
Rohit Sharma has been named as the new captain of the Indian ODI and T20I teams. The All-India Senior Selection Committee announced the same on December 8, 2021. He will be succeeding Virat Kohli, who had announced his decision to step down as the T20 captain in September 2021.
3. C
The international anti-corruption day is observed annually on December 9 to raise awareness against corruption and the measures that can be implied to fight it. The act of corruption, which exists in all forms of societies, is considered a threat to democracy by the international community.
4. A
Neeraj Chopra has topped the list of the most-searched person on Google in India 2021, followed by Aryan Khan. Neeraj Chopra won India’s first-ever gold medal in Javelin throw at the Tokyo Olympics 2020.
5. A
As per Google India’s ‘Year in Search 2021’, the Indian Premier League (IPL) has filled the top spot for the trending query overall in 2021. IPL is further followed by CoWIN, ICC T20 World Cup, Tokyo Olympics, and Euro Cup in the overall top trending searches in India. Find the list of top trending searches by Indians in 2021 varying across categories throughout the year.
6. D
The funding and implementation of the Ken-Betwa River interlinking project have been approved by the Union Cabinet chaired by Prime Minister Narendra Modi. The total cost of the ambitious Ken-Betwa interlinking of river projects has been assessed to be Rs. 44, 605 crores at 2020-21 price levels. The project of river inter-linking will be completed in the period of 8 years.
7. D
The United States health authorities on December 8, 2021, authorized the use of synthetic antibodies that have been developed by AstraZeneca for preventing Coronavirus infections in individuals who react badly to the COVID-19 vaccines.
8. D
India’s first woman psychiatrist Sharda Menon, who was awarded the Padma Bhushan award, passed away recently. He was awarded the Padma Bhushan for social work in the year 1992. He was born in Mangaluru, Karnataka in a Malayali family.
9. B
Punjab National Bank has recently launched “PNB PRIDE-CRMD Module” app for the handicapped employees. which allows the visually impaired to freely access the system and interact with customers by tapping on their phones.
10. D
The Chairperson of the National Commission for Women, Ms. Rekha Sharma, has recently started the program “She is a Changemaker”. The program aims to improve the leadership skills of grassroots women political leaders.
11. A
India has reached the first place in the year 2020 in terms of export of food export goods to Arab countries. India has achieved this position after leaving behind Brazil after almost 15 years. According to a Reuters report, these figures have been provided by the Arab-Brazilian Chamber of Commerce.
12. A
Eminent Assamese poet Nilamani Phukan Jr. has recently been awarded 56th and Konkani novelist Damodar Moujo with 57th Jnanpith Award. Sapphire Phukan was born in 1933. He has written 13 books of poetry in Assamese language and has also worked on other genres of Assamese literature.
13. D
India’s Defense Research and Development Organization (DRDO) has recently successfully test-fired a “Vertical Launch-Short Range Surface-to-Air Missile” from the Integrated Test Range at Chandipur, off the coast of Odisha. Which was aimed at an electronic target at a much lower altitude than a vertical launcher.
14. A
America’s space agency NASA has recently appointed Indian-origin doctor and Lieutenant Colonel Anil Menon in the US Air Force for his future space missions. Chosen for. NASA has selected a total of 10 people for these missions. Anil Menon was born in Ukraine.
15. B
Sanjeev Mehta, Chairman and Managing Director of Hindustan Unilever Company, has recently been appointed as the next Chairman of FICCI. He will replace the current president Uday Shankar. Sanjiv Mehta is currently serving as the Senior Vice President of FICCI.
16. D
Paleontologists at Harvard University have recently discovered the first dinosaur species that lived 214 million years ago in Greenland. During excavations in the year 1994, two well-preserved dinosaur skulls were unearthed during excavations in East Greenland. This new species has been named “Issi Sanek”.