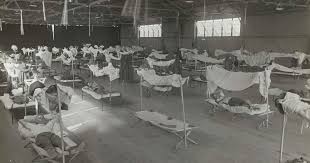 The first known case of Spanish Flu was identified among military personnel in Fort Riley, Kansas, US, in early March 1918. Since Spain remained neutral during World War 1 and there was no censorship on its press, its media reported widely about the flu and people misunderstood that the virus originated in Spain. The virus began to spread as the US troops travelled during the war, especially to European countries such as England, France, Spain and Italy. By summer, the infection had spread to different parts of Asia, Africa, Russia and New Zealand.

The Spanish flu was so severe that 4.4 to 6.1 per cent of the Indian population died, according to the National Bureau of Economic Research, Cambridge. The 1918 pandemic killed around 11-14 million in India.

Cut to 2021 in India. Political rallies, religious gatherings. They tell you how very few learn from history. These events from early 2021 were followed by the second wave of the pandemic in India. Often, comparisons have been drawn between the Spanish flu of 1918, renamed 1918 H1N1 flu, and Covid-19, with many believing that it would follow the same trajectory. While the basic principles of infection spread remain the same, both the pandemics are very different and not comparable.

On the other hand, the Covid-19 virus began with reports of several cases of pneumonia in Wuhan, China, in December 2019. The first case of the virus outside China was recorded in Thailand on January 13. Soon, as people flew in and out of countries, the virus began to spread across the world. Covid-19 was characterised as a pandemic in March 2020.

Six months after India began the world’s largest vaccination drive, it has administered jabs to just over five percent of its population.

It’s currently vaccinating around four million people every day, but it needs to give about eight to nine million jabs a day to vaccinate everyone who is eligible by the end of this year.

Despite a promising start in January, the drive has lagged in recent months because of low supply and delays in approving new vaccines.

Most countries, especially those in the developing world, have struggled to access vaccines – a challenge that India, as the world’s largest vaccine maker, didn’t expect to face.

But Prime Minister Narendra Modi’s government didn’t place orders from vaccine makers early enough – and a devastating second wave in April pushed them to expand the drive too quickly to the entire adult population, which is nearly a billion.

Covid-19 deaths in India crossed 400,000 on Thursday. At the time of going to print, the number had touched 400,264. In just over five weeks, from May 23 to July 1, the country reported 100,000 deaths from Covid even as the second wave waned. The pace of decline in deaths has been slower than the fall in case trajectory. V K Paul, member-Niti Aayog, recently said this is because many patients who caught the virus during the second wave are still in intensive care units (ICUs) even though Covid wards have emptied in most parts of the country. On Wednesday, India reported over 1,000 deaths, down from the peak of almost 4,500 deaths on May 18.

More than 60 per cent of the total Covid deaths have occurred since March 2021 during the second wave that battered the country’s healthcare infrastructure. While India has the world’s third-highest death toll resulting from the pandemic after the US and Brazil, deaths per million are around 289, which is much lower than the global average of more than 500 deaths per million.

There were three waves of the Spanish Flu and mortality was high in people less than five years old, in people falling in the 20-40 age group, and in those 65 years and older. The first wave began in early March 1918 and patients had the usual flu symptoms such as fever and uneasiness. The first wave was milder than the second wave, but infections spread fast owing to movement during the world war.

The second wave was deadlier. The virus mutated during the summer and infections started to surge in August-September 1918. Infected people suffered severe pneumonia and fever, nasal haemorrhaging, and lung damage, and the number of fatalities jumped. As per the Journal of Clinical Virology, 2009, “Two-thirds of all the deaths from Spanish influenza occurred during the months from October through December 1918.”

The third wave started towards end December 1918-January 1919 and raged till on March-April 1919, but it was less virulent than the second and the absence of the war curtailed the infection spread. There was also a fourth bout of Spanish Flu in the first three months of 1920.

An estimated 500 million people were infected with the Spanish flu worldwide and more than 50 million people died.The fatality as a percentage of population during Spanish Flu was approximately 2.7 per cent. As of now, the death toll in Covid-19 is lower with around three million fatalities globally, accounting for 0.05 per cent of the current world population.

We have probably seen two waves of the Covid-19 so far. The first wave infections peaked in early January 2021 – with more than eight lakh cases daily – and began to fall soon after. But a second wave hit in end-February and peaked at nine lakh daily infections by end of April 2021. The Spanish flu extended well into the end of the second year, an indication that Covid infections could prolong at least till the end of 2021 and into the first quarter of 2022. The progress of the Spanish Flu pandemic also indicates the probability of more waves succeeding the current one. People and governments should stay prepared for possible surges in the coming months.

With the World War 1 already using up physicians, nurses and hospital space, the US faced a shortage of medical facilities needed to treat the pandemic patients. And back in the early 20th century, there was a general lack of antibiotics to cure the virus. In fact, the first vaccine for flu was licensed in the US in the 1940s. So countries began to adopt practices such as social distancing, wearing masks, closing down schools, colleges, libraries and theatres, limiting public gatherings, asking patients who have been infected to isolate and quarantine.

That apart, physicians and doctors also began to prescribe aspirin. Aspirin’s patent, which was trademarked by Bayer, expired in 1917. This allowed a lot of companies to manufacture the drug and doctors prescribed heavy doses (up to 30 grams daily) of it to patients, which resulted in aspirin poisoning.

Studies showed that the pandemic came to an end with people either dying or gaining immunity once they had been affected by the virus. Similar practices were followed to rein in Covid-19 infections. Countries began to close borders and imposed nationwide lockdowns. Social distancing norms were followed, people were asked to wear masks, use sanitizers and ventilator support, medical oxygen and drugs such as remdesivir were provided. Instances of over-use of Covid drugs are also rampant.

Meanwhile, pharmaceutical companies also began producing vaccines and several countries have been vaccinating their population over the last few months. But the world is yet to recover from the virus – new infections continue to stem across the globe.

The Spanish Flu never went away, it snuck in the background and people gained immunity to fight the virus. Studies says that the virus strain (H1N1) that caused the pandemic stayed back as the seasonal flu, and at times, merged with other types of flu (bird flu, swine flu, etc) to create more dangerous strains – the outbreaks that happened in 1957 (H2N2 virus, Asian flu), 1968 (H3N2 virus, Hong Kong flu) and 2009 (H1N1, Swine flu) were all contributed in part by the Spanish Flu virus.

With Covid-19, the vaccine sure will give us immunity and perhaps help the world regain normalcy. But only time will tell if it will help us fight all the variants the virus might mutate into. There is also the possibility that like the seasonal flu, Covid-19 too lingers around, and returns every once in a while, regularly.

How badly was India hit?

The Spanish Flu tiptoed into Bombay via troop ships in June 1918 and the virus spread rapidly as soldiers returned to their hometowns in Punjab and the United Provinces after the war. The second wave between September-December 1918 was just as brutal in India. As per Gateway House, “A conservative estimate placed influenza deaths at 12-13 million from September to December 1918. More recent studies give a higher band of up to 18.5 million persons.”

India is among the countries worst-hit by Covid-19 as well. The first case was reported in Kerala on January 30, 2020, and infections soon spread to other parts of the country. The first wave of infections peaked in mid-September 2020 with more than 90,000 infections a day and fell towards the end of the year. However, a more lethal second wave hit the country towards end February, and the number of daily infections soared to over four lakh a day in May. Daily fatalities also surged to more than 4,000 people during the second wave, from 1000-1200 fatalities during the first wave peak. Cumulatively, the virus has claimed the lives of more than three lakh people in India so far.

During both the Spanish flu and the Covid-19 pandemics, the number of fatalities has been high in India because of its extremely dense population. This is perhaps why it is all the more necessary for us to not lower our guards the moment we sense some respite. The medical infrastructure facilities also need to be strong enough to support people when they fall ill en masse.