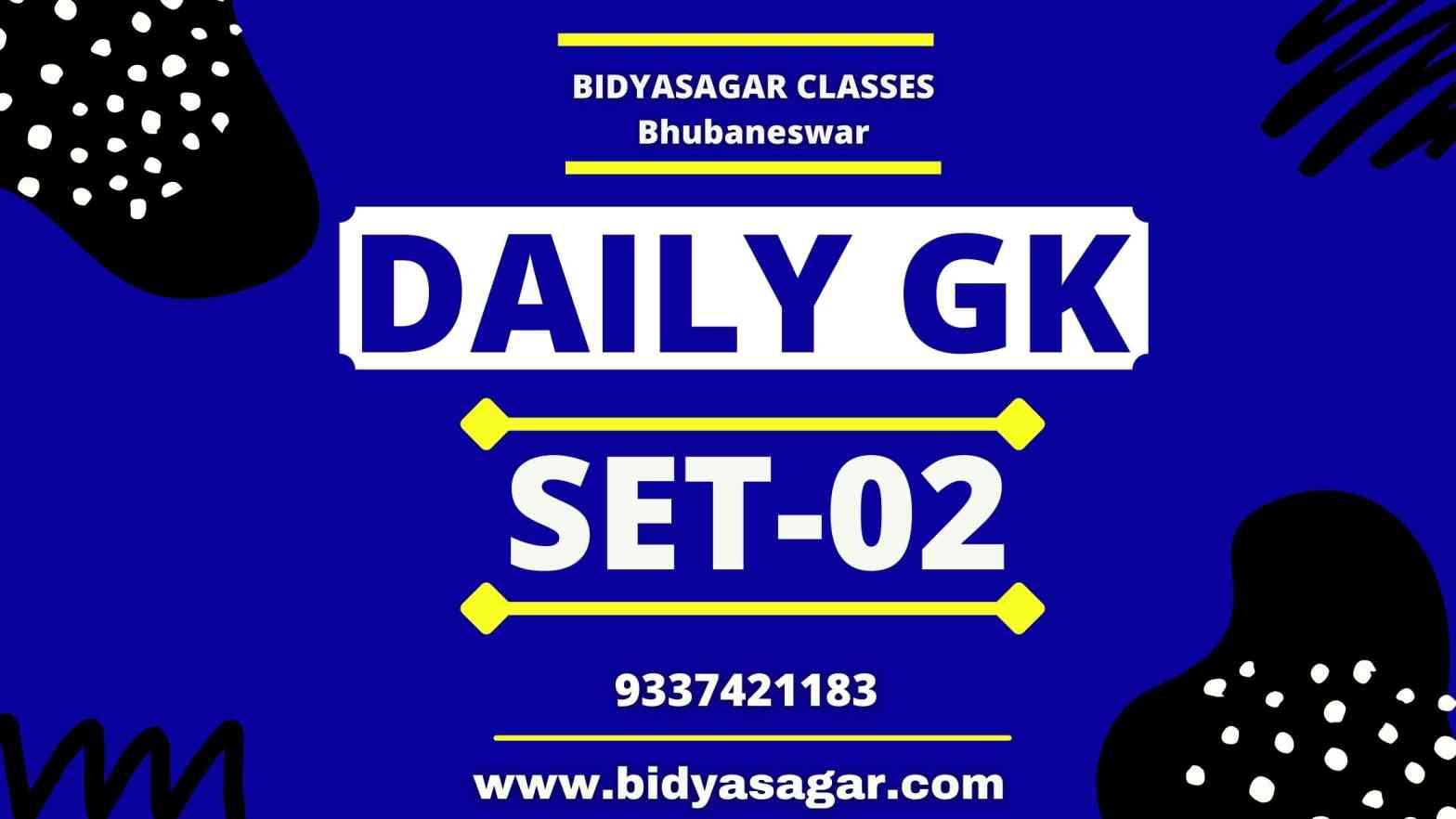 1. What is the capital of Syria?
A. Lusaka
B. Kiev
C. Nicosia
D. Damascus
2. Which country is the largest producer of natural rubber in the world?
A. Malaysia
B. Indonesia
C. India
D. Thailand
3. The only perennial river in Peninsular India is ________.
A. Godavari
B. Kaveri
C. Krishna
D. Bhima
4. Which of the following is the moon of Pluto?
A. Charon
B. Hydra
C. Styx
D. All of the above
5. Which of the following was the first spacecraft to fall into orbit around the Sun?
A. Luna 1
B. Luna 2
C. Luna 3
D. Luna 4
6. The substances which have very low ignition temperature and can easily catch fire with a flame are called _____________ substances.
A. hazardous
B. perilous
C. incombustible
D. inflammable
7. Adamsia (Sea anemone), Pennatula (Sea-pen) are examples of which Phylum?
A. Cnidaria
B. Aschelminthes
C. Annelida
D. Arthropoda
8. Sexual reproduction in Algae that takes place through fusion of two dissimilar size gametes is called?
A. Zoospores
B. Anisogamous
C. Isogamous
D. Oogamous
9. ___________ is the most ecologically relevant environment factor.
A. Water
B. Temperature
C. Light
D. Soil
10. What is the formula of chlorophyll ‘b’?
A. C55H72O5N4Mg
B. C55H70O6N4Mg
C. C65H70O6N4Mg
D. C45H70O6N4Mg
11. Who of the following is not a full -time member of NITI Ayog?
A. Amitabh Kant
B. Bibek Debroy
C. VK Saraswat
D. Ramesh Chand
12. A caste census was also conducted in 2011. When was the last time it was conducted before 2011?
A. 1931
B. 1911
C. 1945
D. 1991
13. Which Indian private sector bank has the maximum number of foreign branches ?
A. ICICI Bank
B. AXIS Bank
C. HDFC Bank
D. Bandhan Bank
14. Which of the following does not feature on the firstly released Rs 200 notes?
A. Ashoka Pillar
B. Sanchi Stupa
C. Swachh Bharat Abhiyan Logo
D. Hampi with Chariot
15. Who calculates WPI in India?
A. NSSO
B. CSO
C. OEA
D. CAG
16. What is the modern name of rig vedic “Sutudri”?
A. Jhelum
B. Chenab
C. Sutlej
D. Kabul
17. According to the categories of land mentioned in the Chola inscriptions ___________ was known as the land donated to Jaina institutions?
A. Vellanvagai
B. Brahmadeya
C. Shalabhoga
D. Pallichchhandam
18. Which organisation conducted training programmes for the volunteers, whose services were later utilised for relief work among people suffering form famines, epidemics, floods and other disasters ?
A. Social Service League
B. Brahmo Samaj
C. Rama Krishna Mission
D. None of the above
19. Prithviraja III (1168-1192) was a best known ___________ ruler.
A. Chahamana
B. Gahadavala
C. Chalukya
D. Brahmana
20. In 1918, Mahatma Gandhi went to _______ to organise a satyagraha movement amongst cotton mill workers.
A. Madras
B. Bombay
C. Surat
D. Ahmedabad

1.Answer : D
• Damascus is the capital and the largest city of Syria. It is a major cultural centre of the Levant and the Arab world.
2.Answer : D
Thailand is ranked as the largest producer of natural rubber in the world. Thailand is followed by Indonesia and China at the second and third place respectively. India stands at the fourth position in rubber production.
3.Answer : B
River Kaveri originates at Thalakaveri at Kodagu district, Karnataka and passes through the states of Karnataka, Tamil Nadu, Kerala and Puducherry. The river receives rainfall in its northern catchment area during the Southwest monsoon and in the southern catchment area during the North East monsoon. Hence the river is termed as the only perennial in South India
4. Answer : D
Pluto has five known moons: Charon (the largest, with a diameter just over half that of Pluto), Styx, Nix, Kerberos, and Hydra. Pluto and Charon are sometimes considered a binary system because the barycenter of their orbits does not lie within either body.
5. Answer: A
• The Luna Programme was a series of robotic space craft missions sent to the Moon by the Soviet Union between 1959 and 1976.
• Luna 1 (January 1959) missed its intended impact with the Moon and became the first spacecraft to fall into orbit around the Sun.
6. Answer: D
• The substances which have very low ignition temperature and can easily catch fire with a flame are called inflammable substances.
• Example- alcohol, LPG, sodium, petrol, phosphorus etc.
7. Answer: A
Adamsia (Sea anemone), Pennatula (Sea-pen) are examples of Cnidaria Phylum.They are predominantly marine. Their distinguishing feature is cnidocytes, specialized cells that they use mainly for capturing prey.
8. Answer: B
• Sexual reproduction in Algae that takes place through fusion of two dissimilar size gametes is called Anisogamous. Anisogamy (also called heterogamy) is the form of sexual reproduction that involves the union or fusion of two gametes, which differ in size and/or form.
• Reproduction in algae can be vegetative, asexual, or sexual. Vegetative reproduction occurs through fragmentation, asexual occurs through formation of spores and binary fission, whereas sexual reproduction takes place by fusion of two haploid gametes.
9. Answer: B
Temperature is the most ecologically relevant environmental factor. You are aware that the average temperature on land varies seasonally, decreases progressively from the equator towards the poles and from plains to the mountain tops. It ranges from subzero levels in polar areas and high altitudes to >500C in tropical deserts in summer.
Plants are also affected by temperature because increase in temperature leads to more transpiration through leaves and stems. Different metabolic processes requiring enzymes are also affected by varying temperature. Therefore we can conclude that temperature is ecologically relevant abiotic factor.
10. Answer: B
• C55H70O6N4Mg is the formula of chlorophyll ‘b’. Chlorophyll b helps in photosynthesis by absorbing light energy.
• It is more soluble than chlorophyll a in polar solvents because of its carbonyl group. Its color is yellow, and it primarily absorbs blue light.
11. Answer: A
Amitabh Kant is the present CEO of the NITI Ayog but is not one of the full-time members.
Full-time Members: Bibek Debroy (Economist), V. K. Saraswat (former DRDO Chief), Ramesh Chand (Agriculture Expert) and Dr. Vinod Paul (Public Health expert)
12. Answer: A
The Socio Economic and Caste Census 2011 (SECC) was conducted for the 2011 Census of India. It was last conducted in 1931.
13. Answer: A
ICICI bank has the maximum number of foreign branches amongst the private sector banks.
SBI leads the list of public sector banks, followed closely by Bank of Baroda.
14. Answer: D
Hampi with Chariot is visible on the new Rs 50 notes.
15. Answer: C
• In India, WPI is also known as the headline inflation rate.
• Office of Economic Advisor (OEA), Department of Industrial Policy and Promotion, Ministry of Commerce and Industry calculates the WPI.
• India uses the Wholesale Price Index to calculate and decide the rate of inflation in the economy.
16. Answer: C
Sutlej”is the modern name of rig vedic Sutudri“. Sutlej is the longest of the five rivers that flow through the historic crossroads region of Punjab in northern India and Pakistan. The Sutlej River is also known as Satadree. It is the easternmost tributary of the Indus River. The river basin area in India is located in Himachal Pradesh, Punjab, Jammu and Kashmir, Rajasthan and Haryana states.
17.Answer: D
According to the categories of land mentioned in the Cholainscriptions,there are five types of land which are discussed below:
• Vellanvagai : land for non-Brahmana, peasant proprietors
• Brahmadeya : land gifted to Brahmanas
• Shalabhoga : land for the maintenance of a school
• Devadana : Tirunamattukkani: land gifted to temples
• Pallichchhandam : land donated to Jaina institutions
18. Answer: A
• 1911, Narayan Rao Malhar Joshi established an organization called the Social Service League.
• The League conducted training programmes for volunteers, whose services were later utilized for relief work among people suffering form famines, epidemics, floods and other disasters, and also for welfare programmes among the poor and the destitute.
19. Answer: A
• Prithviraja III (1168-1192) was a best known Chahamana ruler.
• He defeated an Afghan ruler whose name was Sultan Muhammad Ghori in 1191, but lost to him the very next year, in 1192.
• He was popularly known as Prithviraj Chauhan or Rai Pithorain Chahamana Dynasty later known to be as Chauhan Dynasty.
20. Answer: D
Mahatma Gandhi went to Ahmedabad in 1918 to organise a satyagraha movement amongst cotton mill workers. This happens due to tension between workers and mill-owners of Ahmedabad. Gandhiji himself went onto a fast until death and asked the workers to go on a strike and demand for a hike of 35% in their wages.