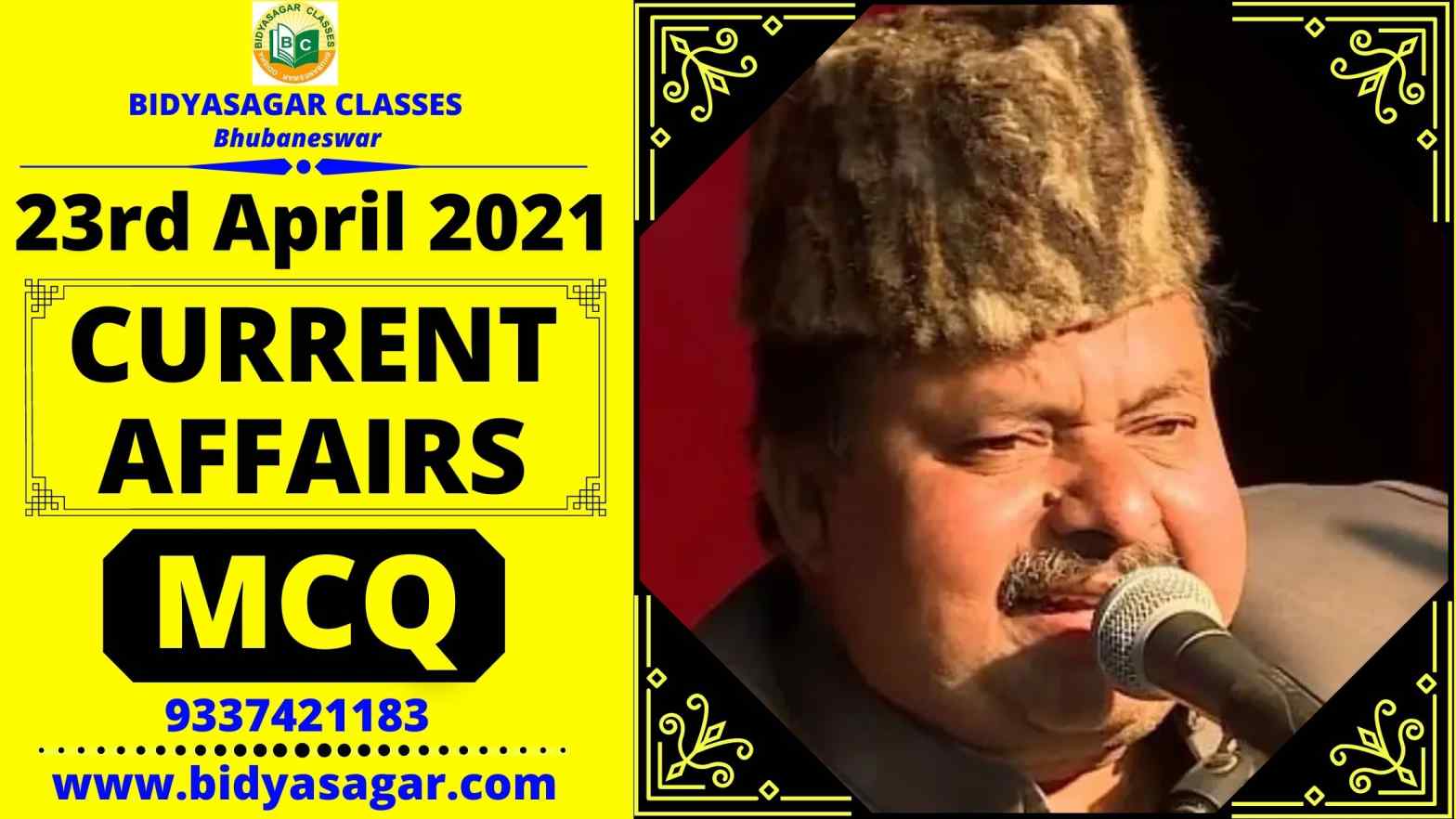 Q2.India has extended suspension of International flights till when?

Q3.When is the current Chief Justice of India SA Bobde set to retire?

Q4.Who will be the 48th Chief Justice of India?

Q5.Which Indian-American was confirmed to be US President Joe Biden’s new Surgeon General?

Q6. The Indian Government has welcomed an initiative by which nation to promote peace in Yemen?

Q8.The Defence Ministry has signed a deal with which company to procure 1,300 combat vehicles?

Q9. What was the rank of India in the Global Energy Transition Index (ETI) 2021?

Q12. On which date, World Book and Copyright Day is observed every year?

Q14. Farid Sabri passed away recently. He was associated with which field?

(a) Realizing Opportunities of the 21st Century For All

(d) Change the system, not the climate

Q17. Who has been chosen as the external auditor by the Hague-based Conference of State Parties of the Organisation for the Prohibition of Chemical Weapons?

Q19. Who has been appointed as chairperson of the NASSCOM?

Q22. Idriss Deby Itno has passed away. He was the President of which country?

Indian Coast Guard (ICG) Ship ‘Vajra’ was commissioned on March 24, 2021 at Chennai by General Bipin Rawat, Chief of Defence Staff. India Coast Guard DG K Natarajan and IG S Paramesh COMCG (East) were also present on the occasion. The vessel, indigenously designed and built by Larsen and Toubro Shipbuilding Ltd in Chennai, is the sixth in series of seven Offshore Patrol Vessels. It will help enhance coastal security through its high-tech features and highly sophisticated navigation and communication systems.

The United States Senate on March 22, 2021, voted 57-43 to confirm the Indian- American physician Dr. Vivek Murthy to be US President Joe Biden’s surgeon general. With this, US Senate handed the administration one of its top public health officials amid the ongoing Coronavirus pandemic. Dr. Vivek Murthy had earlier served as the surgeon general under Barack Obama’s administration but was fired in 2017 by former US President Donald Trump.

The Indian government has welcomed the initiative announced by Saudi Arabia to promote peace in Yemen. The government also assured that it supports all forms of efforts to find a political solution to the Yemen crisis.

The US President Joe Biden administration has decided to re-establish the Homeland Security Dialogue with India which was earlier discontinued by the former President of US Donald Trump.

The Ministry of Defence on March 22, 2021, signed a deal with Mahindra Defence Systems Ltd for the procurement of 1,300 light combat vehicles worth Rs. 1,056 crores for the Indian Army.

Sol. India has been ranked at the 87th position among 115 countries in the Energy Transition Index (ETI) that tracks nations on the current performance of their energy systems across various aspects, according to a World Economic Forum (WEF).

Sol. Sweden in the first place, followed by Norway and Denmark.

Sol. The World Book and Copyright Day (also known as ‘International Day of the Book’ and ‘World Book Day’), is an annual event organized on April 23 by the United Nations Educational, Scientific and Cultural Organization (UNESCO) to promote reading, publishing, and copyright.

Sol. India’s Comptroller and Auditor General (CAG), GC Murmu has been chosen as the external auditor by the Hague-based Conference of State Parties of the Organisation for the Prohibition of Chemical Weapons (OPCW), for a three-year term starting 2021.

Sol. Reserve Bank of India (RBI) has issued a show-cause notice prior to cancelling the licence of fraud-hit Sambandh Finserve Pvt Ltd. after its networth eroded below the regulatory minimum and financial situation worsened beyond redemption over the recent months. Sambandh is registered as an NBFC-MFI.

Sol. Accenture India’s chairperson, Rekha M Menon has been appointed as chairperson of the National Association of Software and Services Companies (NASSCOM)

Sol. The opening ceremony of the Boao Forum for Asia Annual Conference 2021 was held in Boao, south China’s Hainan Province.

Sol. The World Book Capital for 2021 is Tbilisi, Georgia.

Sol. The President of the Republic of Chad, Idriss Deby Itno, has passed away, following a confrontation with rebels after which he suffered wounds on the battlefield.

Sol. Zimbabwe (115) is the last ranked country in the index.