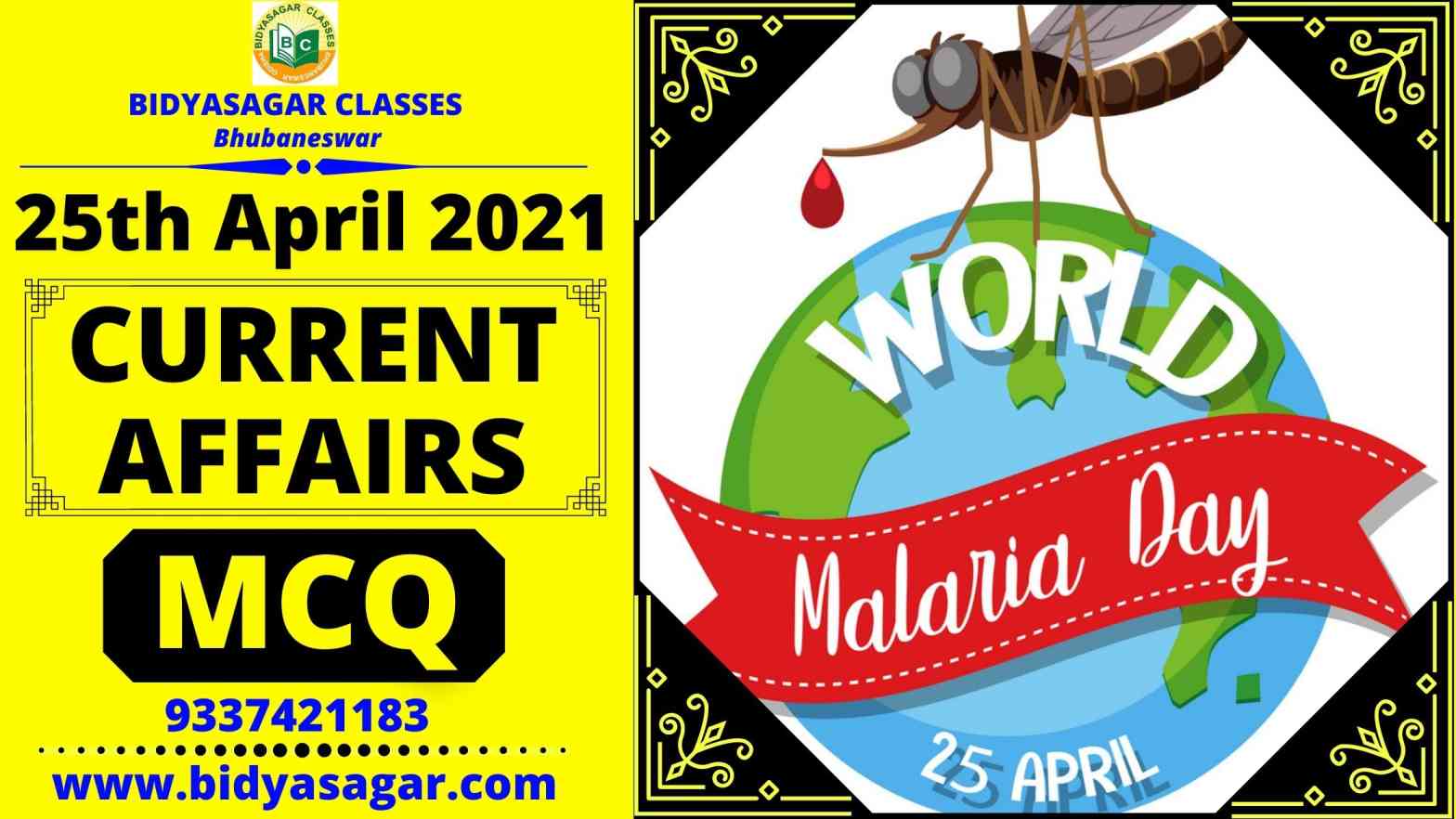 1. The Boao Forum for Asia Annual Conference 2021 was held in which country?

2. Recently RBI restricted which card companies from on boarding new domestic customers from May 1 for violating data storage norms?

A) American Express and Diners Club

B) MasterCard and Diners Club

3. As per India Rating and Research, the cost of vaccinating all citizens above the age of 18 years against Covid-19 will amount to how much?

4. As per the agricultural ministry, farms exports up by how much per cent in April-Feb FY 21?

5. As per data, the essential Agri commodities exports rise up by how much per cent in April May FY21?

6. How much per cent of recovery in GDP in March ending FY 22 was projected by Fitch?

7. In which country, the World Youth Boxing Championship 2021 was held?

9. Who has been appointed as the first women chairperson of NASSCOM?

10. Who has been awarded the prestigious ‘Nelson Mandela World Humanitarian Award 2021’ by the Diplomatic Mission Global Peace?

11. NASA’s Perseverance rover on which planet has made oxygen from the planet’s carbon dioxide atmosphere?

12. Recently Idriss Deby Itno passed away. He was a former president of which country?

13. Recently Lalit Behl passed away. He was related to the which field?

14. Recently Shravan Rathod passed away. He was related to which field?

15. Recently which popular Gujarati and Hindi film actor passed away due to cardiac arrest?

16. Who is the author of the book “Climate Change Explained-For one and all”?

B) Unique ability to entertain

A) The veterinarian Response to Covid 19 crisis

B) Environmental protection for improving animal and human health

D) The role of veterinary professional

20. When is the International Day of Multilateralism and Diplomacy for Peace observed?

Explanation: India Ratings and Research (Ind-Ra) stated that the cost of vaccinating all citizens above the age of 18 years against Covid-19 will amount to Rs. 67,193 crores. It is to be noted that of total Rs. 67,193 crores, states together will incur Rs.46,323 crores.

Explanation: India exported agricultural commodities worth Rs 2.74 lakh crore till February of the 2020-21 fiscal, up by 16.88 percent from Rs 2.31 lakh crore in the year-ago period, notwithstanding the pandemic, the agriculture ministry said.

Explanation: Despite the Covid-19 situation the world over, the country’s export of essential agricultural commodities for the April 2020-February 2021 period has increased by 18.49% to ₹2.74 lakh crore as compared with ₹2.31 lakh crore in the same period last year.

Explanation: Fitch Ratings said the resurgence of COVID-19 infections may delay India’s economic recovery, but won’t derail it, as it kept the sovereign rating unchanged at ‘BBB-‘ with a negative outlook.

Explanation: Tamil Nadu teenager Arjun Kalyan became India’s 68th Chess Grandmaster when he crossed the 2500 ELO mark after beating Dragan Kosic in the fifth round of GM Round Robin “Rujna Zore-3” in Serbia.

Explanation: The National Association of Software and Services Companies (Nasscom) announced the appointment of Rekha M Menon, Chairperson and Senior Managing Director at Accenture in India as its Chairperson for 2021-22.

Explanation: NASA’s Perseverance rover on Mars has made oxygen from the planet’s carbon dioxide atmosphere. It is the second successful technology demonstration on the mission, which flew a mini-helicopter.

Explanation: The President of the Republic of Chad, Idriss Deby Itno, has passed away, following a confrontation with rebels after which he suffered wounds on the battlefield.

Explanation: Veteran actor-filmmaker Lalit Behl, known for featuring in acclaimed films like ‘Titli’ and ‘Mukti Bhawan’, passed away due to COVID-19 related complications. He was 71.

Explanation: Popular Gujarati and Hindi film actor Amit Mistry passed away due to cardiac arrest. He was 47.

Explanation: Aakash Ranison, a climate activist and blogger, has released a book called Climate Change Explained – For One And All.

Explanation: World Book and Copyright Day are celebrated every year on April 23 to promote reading, publishing, and copyright.

Explanation: National Panchayati Raj Day is celebrated on April 24 every year in India.

Explanation: World Veterinary Day is widely observed annually on the last Saturday of April, every year across the world. This year, it falls on April 24.

Explanation: The International Day of Multilateralism and Diplomacy for Peace observed every year on 24 April.