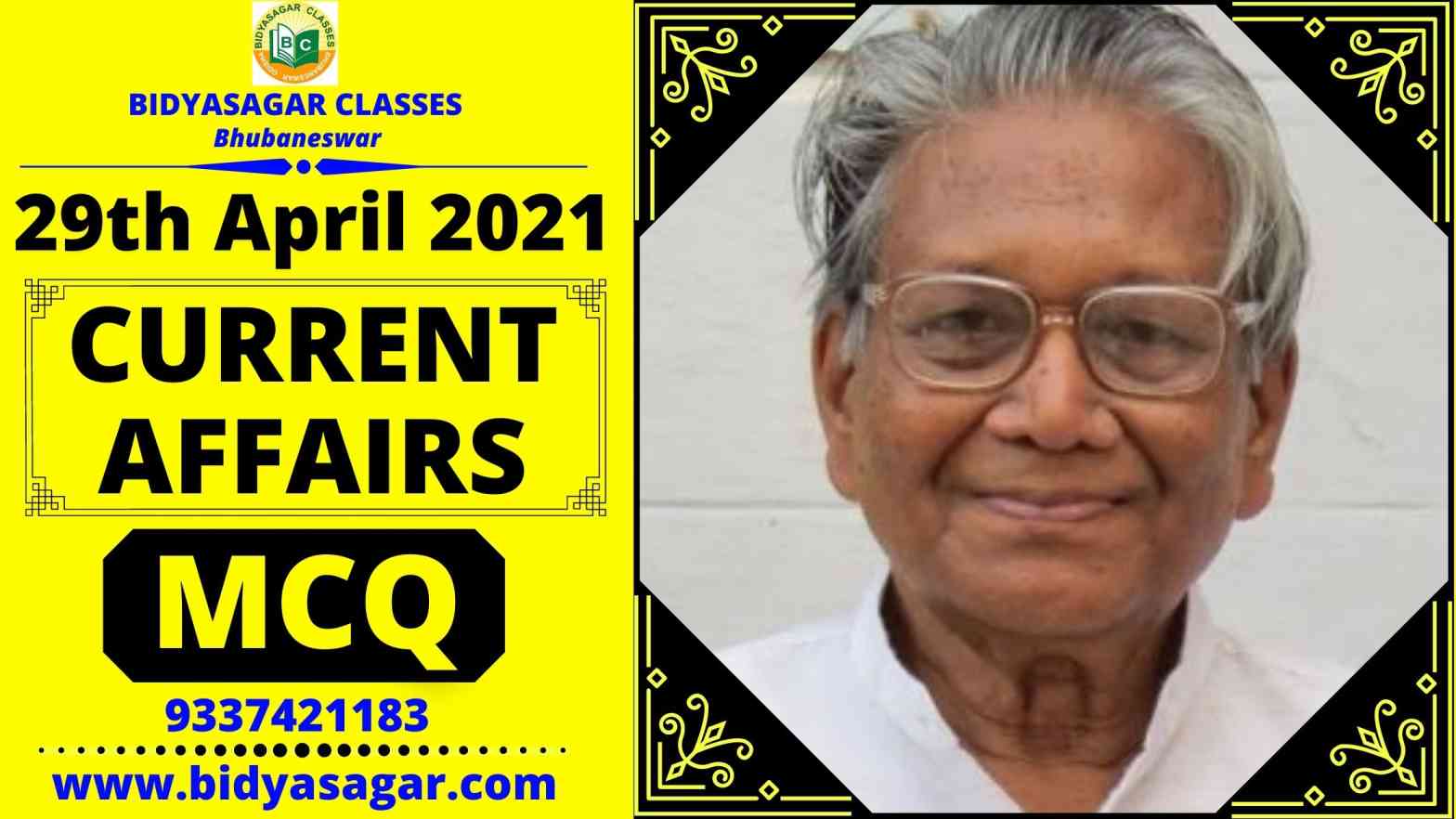 1. Recently the central government extended ₹50 lakh insurance scheme for healthcare workers for one year. Which company will implement the scheme?

2. Recently the Indo-Tibetan Border Police (ITBP) has established a ‘Water Sports and Adventure Institute (WSAI)’ in which state?

3. Recently Indian Army signed MoU with NIEDO and which other company for Ladakh Ignited Minds Project?

4. Which bank has commenced operations as a small finance bank with effect from April 26?

5. Which has become the first crypto exchange to provide investment disclosures in India?

B) Ministry of Finance

7. British are exploring the possibility of creating a new digital currency. Name it?

8. Global forecasting firm Oxford Economics has revised its India GDP growth forecast for 2021 to what percent?

9. As per Asian Development Bank, India’s GDP to grow at what percent this fiscal?

10. Which Institute has signed MoU with NCDC towards greater collaboration in issues and areas related to the development of cooperatives, agriculture, and allied sectors and to the holistic approach towards sustainable development?

11. Which company has signed with HSBC to execute a blockchain-enabled paperless trade transaction?

12. The 2021 AIBA Youth World Boxing Championships was held in which country?

14. Who has been appointed as the new Managing Director and CEO of National Commodity and Derivatives Exchange Ltd (NCDEX) ?

15. Recently Nikol Pashiyan resigned from his post. He was the PM of which country?

16. Who has been chosen for the maiden Global Lantern Award by WHI for his outstanding efforts in social, educational, and charitable spheres?

17. Which state government has won the “E-Panchayat Puraskar 2021?

18. Which state/UTs area of 14,491 hectares becomes the first large territory to get organic certification?

19. Who has bagged the Thilakan memorial award named after the veteran actor for overall contribution in the creative field?

Explanation: After an unprecedented spike in covid-19 positive cases, the Centre extended the Rs 50 lakh insurance scheme for about 22 lakh healthcare providers for another year with immediate effect. The scheme implemented by New India Assurance was slated to end on April 24.

Explanation: The Indo-Tibetan Border Police (ITBP) has established a ‘Water Sports and Adventure Institute (WSAI)’ near Tehri Dam Reservoir in Uttarakhand. The institute was inaugurated by Uttarakhand Chief Minister Tirath Singh Rawat along with Union Minister of State for Sports Kiren Rijiju.

Explanation: Cryptocurrency exchange Bitex has announced that it has started providing investment declaration reports for all its retail and institutional investors, becoming the first exchange in India to comply with the recent amendments made to the Companies Act 2013 by the Ministry of Corporate Affairs.

Explanation: The Reserve Bank of India issued guidelines for the appointment of statutory auditors of banks and non-banking finance companies (NBFCs), including housing finance companies. It will be applicable for the financial year 2021-22 and onwards.

Explanation: British authorities are exploring the possibility of creating a new digital currency that Treasury chief Rishi Sunak indicated could be known as “Bitcoin“.

Explanation: The Indian economy is projected to grow at 11 percent in the current financial year amid the “strong” vaccine drive, said ADB while cautioning that the recent surge in COVID cases may put the country’s economic recovery at “risk”.

Explanation: IIT Kharagpur and the National Cooperative Development Corporation (NCDC) have signed an MoU towards greater collaboration in issues and areas related to the development of cooperatives, agriculture and allied sectors and to the holistic approach towards sustainable development.

Explanation: Tata Steel, along with HSBC, has executed a blockchain-enabled paperless trade transaction. According to the company, this is a global first for the steel industry.

Explanation: The Securities and Exchange Board of India (SEBI) has approved the appointment of Arun Raste as the new Managing Director and CEO of National Commodity and Derivatives Exchange Ltd (NCDEX) for five years.

Explanation: WHI, an organization having special consultative status with the Economic and Social Council, UN, has chosen Geevarghese Mar Coorilos Metropolitan, Diocese of Mumbai, for its maiden Golden Lantern Award.

Explanation: The Uttar Pradesh government said it has won the “E-Panchayat Puraskar 2021”, ranking first in Category I. It was followed by Assam and Chhattisgarh at the second position, while Odisha and Tamil Nadu stood third, the government said.

Explanation: About 14,491 hectare (ha) area in Andaman and Nicobar has been certified as organic, the first large contiguous territory to be done under a government scheme, Agriculture Ministry said.

Explanation: Theatre and film director Pramod Payyannur bagged the Thilakan memorial award named after the veteran actor for overall contribution in the creative field. The award is constituted by Thilakan Smarakavedi.

Explanation: The election-fraud film Absolute Proof, singer Sia’s heavily panned directorial debut Music and Rudy Giuliani, former New York City mayor, were the top winners at the 2021 Razzie Awards, given to the worst movies and performances of the year.