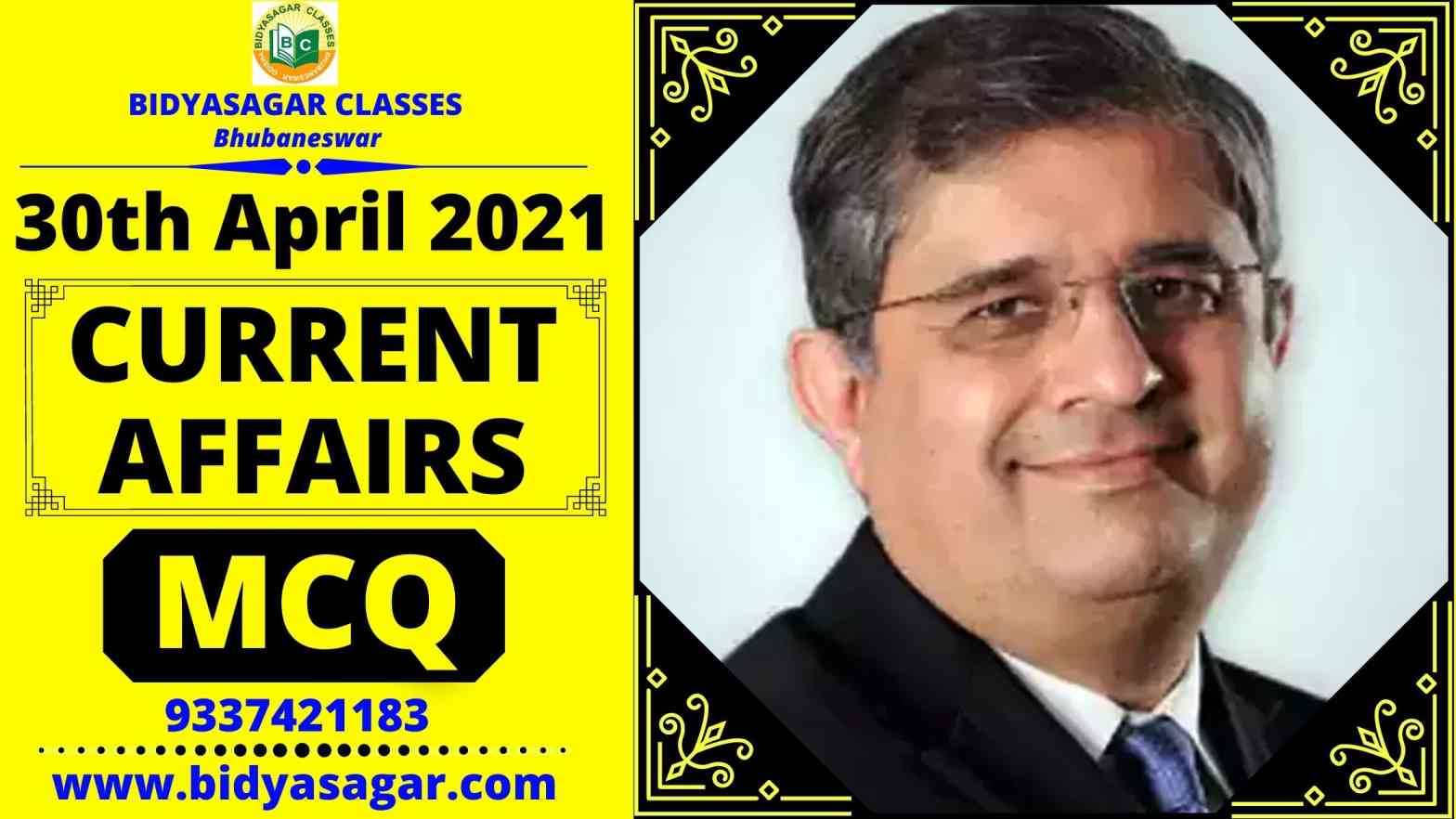 Q1.What is the rank of India in the Chandler Good Government Index (CGGI) 2021?

Q2.DRDO recently conducted a successful maiden test firing of the 5th generation Python-5 missile. The state of the art missile is which type of missile?

Q3. What is the latest GDP Growth rate estimate of India in the fiscal year 2021-22 as per the ADB?

Q5. When is the International Dance Day observed globally?

Q6. Manoj Das, who has passed away recently was a renowned author of English and______?

Q7. IHS Markit has projected the GDP growth rate of India in FY22 at what percent?

Q8.Who has been appointed as the brand ambassador of ASICS?

(b) HPCL and NCERT

Q10.Who among the following has won the ‘WILD Innovator Award’ 2021?

Q11.Recently a community service center has been set up to bring all data onboard India’s first dedicated solar space mission to a single web-based interface. Name it?

Q12. Which state appoint oxygen nurses to curb wastage of oxygen at hospitals?

Q13. Recently the cabinet approved the signing and ratification of the Agreement between India and which other country on Customs Cooperation and Mutual Administrative Assistance in Customs Matters?

Q14. Which state has started a unique ‘Oxygen on Wheels’ initiative to ensure incessant supply of Medical Oxygen to both Government & Private Hospitals?

Q15. According to the latest military expenditure database published by the Stockholm International Peace Research Institute, which country is the world’s largest military spender?

Q16. Recently the central government has left GPF and other non-government PF interest rates unchanged at what percent?

Q17. Who was appointed as Chhattisgarh High Court judge recently?

Q18.Who has been designated as the new Finance Secretary of India?

Q19.Who has been appointed as the new Chairman & Managing Director (CMD) of BEML Limited, a Miniratna Defence PSU under the Ministry of Defence?

Q22.Recently which senior officer of the Indian Information Service passed away due to Covid?

Q25.Who is the author of the book “Whereabouts”?

Q27.What is the theme of this year’s World Day for Safety and Health at Work 2021?

A) OHS Vulnerability of Young Workers

B) Anticipate, prepare and respond to crises and invest now in resilient OHS systems

C) Safety and Health and Future of Work

D) Stop the pandemic-Save the Lives

5.Ans.(c)
Sol. The International Dance Day is observed globally on 29 April to celebrate the value and importance of the dance, and encourage participation and education in this art form through events and festivals.

Sol. Eminent Indian educationist, popular columnist and prolific author, who wrote in Odia and English, has passed away.

8.Ans.(e)
Sol. Japanese Sportswear brand ASICS on 27th April announced that it has appointed Ravindra Jadeja, the all-rounder of the Indian cricket team and Chennai Super Kings as its brand ambassador.

Sol. Dr. Krithi K Karanth, Chief Conservation Scientist at Bengaluru-based Centre for Wildlife Studies (CWS), has been chosen as the first Indian and Asian woman for the 2021 ‘WILD Innovator Award’.

Sol: A community service centre has been set up to bring all data on board India’s first dedicated solar space mission to a single web-based interface.The service centre is called Aditya-L1 Support Cell.

Sol: Maharashtra Health Minister Dr. Rajesh Tope has said that the state needs to appoint oxygen Nurses to curb wastage of oxygen and to maintain data of oxygen storage at hospitals.

Sol: The Cabinet, chaired by Prime Minister Narendra Modi, has approved the signing and ratification of an Agreement between India and the United Kingdom on Customs Cooperation and Mutual Administrative Assistance in Customs Matters.

Sol: Karnal District Administration in Haryana has started a unique ‘Oxygen on Wheels’ initiative to ensure incessant supply of Medical Oxygen to both Government & Private Hospitals.

Sol: India was the third largest military spender in the world in 2020, behind only the US and China.

Sol: IAS Officer T V Somanathan who is serving as Secretary, Department of Expenditure in the Finance Ministry has been designated as the Finance Secretary.

Sol: Amit Banerjee has been appointed as the new Chairman & Managing Director (CMD) of BEML Limited, a Miniratna Defence PSU under the Ministry of Defence.

Sol: Chinese space mining start-up launched into low Earth orbit a robot prototype that can scoop up debris left behind by other spacecraft with a big net.

Sol: Ashatai Pathre, a freedom fighter from Ratnagiri district of Maharashtra passed away. She was one hundred years old.

Sol: April 29 is celebrated as International Dance Day to raise awareness about the benefits of dance.

Sol: World Day for Safety and Health at Work is observed on April 28 annually. The day has been observed worldwide since 2003.