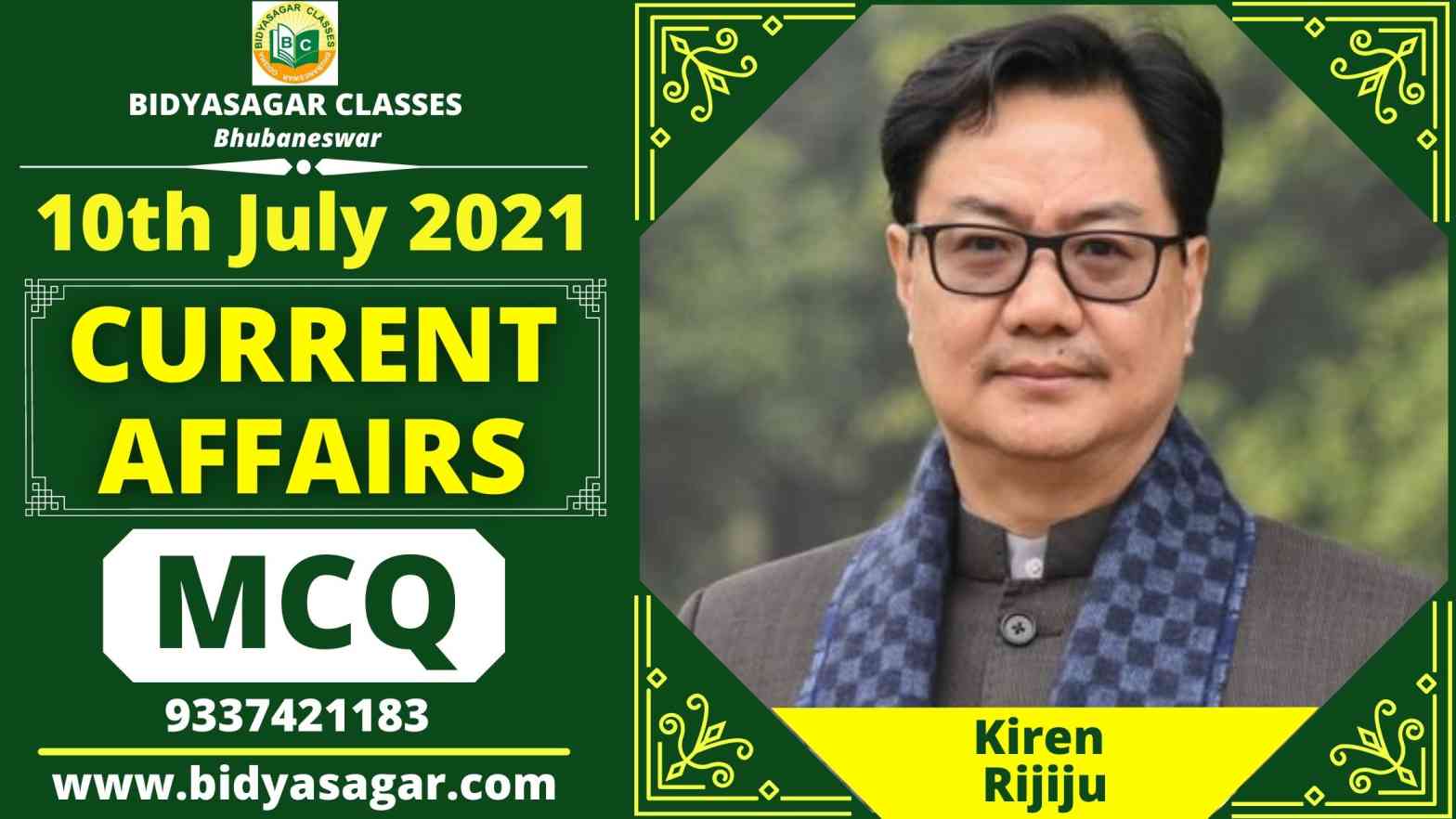 In this article, we will discuss MCQ on important current affairs of 10th July 2021 and their answers with explanations.

1. India’s first Maritime Arbitration Centre is being set up in which city of the country?
A. Pune
B. Bengaluru
C. Chennai
D. Gandhinagar
2. The Ministry of Defence has unveiled a new system for automated sanction and disbursement of defence pension. What is the name given to that system?
A. MITRA
B. ROSHINI
C. SPARSH
D. PRAYAS
3. Indian politician Virbhadra Singh, who has passed away was the former Chief Minister of which state?
A. Himachal Pradesh
B. Gujarat
C. Haryana
D. Bihar
4. The Indian Railways has set up India’s first movable freshwater tunnel aquarium ‘Aquatic Kingdom’ in which city?
A. Shimla
B. Mumbai
C. Bengaluru
D. Dehradun
5. Amazon Inc has launched its first Digital Kendra in India in which city?
A. Hyderabad
B. Agra
C. New Delhi
D. Surat
6.The tallest sandcastle of the world has recently been inaugurated in which country?
A. Russia
B. Denmark
C. Italy
D. France
7. Which of the following has launched newsletter platform “Bulletin”?
A. Microsoft
B. Twitter
C. Amazon
D. Facebook
8. Department of Public Enterprises (DPE) has been brought under which ministry by the central government?
A. Ministry of Commerce and Industry
B. Ministry of Corporate Affairs
C. Ministry of Micro Small and Medium Enterprises
D. Ministry of Finance
9. According to the UN agency, the high temperatures in Antarctica are a result of a large high-pressure system creating by __________.
A. Polar Vortex
B. Doldrums
C. Fohn conditions
D. Monsoon
10. ‘The Light of Asia’: Jairam Ramesh’s new book is a biography of an epic bio-poem on ____________________.
A. Mahatma Gandhi
B. Gautama Buddha
C. Mother Teresa
D. Mahavira
11. Which country held the top rank in the NewsOnAir Radio Live-stream Global Rankings released recently?
A. United States
B. United Kingdom
C. Australia
D. Fiji
12. Under whose chairmanship the govt has set up a 25-member Development Council for Cement Industry?
A. Rakesh Singh
B. HM Bangur
C. Pracheta Majumdar
D. Puneet Dalmia
13. Indian Naval Ship _________ recently participated in military exercises with the frontline frigate of the Italian Navy.
A. Mysore
B. Rajput
C. Jalashwa
D. Tabar
14. Which state of India has proposed to have its own over-the-top (OTT) platform?
A. Kerala
B. Karnataka
C. Tamil Nadu
D. Maharashtra
15. Which of the following portfolio is associated with the union minister Kiren Rijju?
A. Ministry of Food Processing Industries
B. Ministry of Law and Justice
C. Ministry of Steel
D. Ministry of MSME
16. The central government has recently approved a package of how many crore rupees for the purpose of strengthening the health infrastructure in the country?
A. Rs 13,123 Crores
B. 23,123 Crores
C. 33,123 Crores
D. Rs 43,123 Crores
17. Name the chief executive officer of the ICC who has recently been removed from the global body of cricket with immediate effect?
A. Sourav Ganguly
B. Anil Bajal
C. Manu Sawhney
D. Sanjit Kumar
18. Scientists of Central University of which of the following state have recently discovered a new species of plants in Antarctica?
A. Gujarat
B. Maharashtra
C. Punjab
D. Kerala
19. The day is celebrated on 10th July on the birthday of which American-Serbian inventor, popularly known as the mad scientist?
A. Nikola Tesla Day
B. Elbert Einstein Day
C. Galileo Galilei Day
D. CV Raman Day
20. Defence Research & Development Organization and who has recently started a regular M.Tech program in Defense Technology?
A. Education Commission
B. Planning Commission
C. All India Council for Technical Education
D. Punjab University

1. D
The Gujarat Maritime University has signed a Memorandum of Understanding (MoU) with the International Financial Services Centres Authority (IFSCA) in GIFT City to set up the Gujarat International Maritime Arbitration Centre (GIMAC).
2. C
Ministry of Defence has implemented SPARSH [System for Pension Administration (Raksha)] which is a web-based system, for automated sanction and disbursement of defence pension.
3. A
Senior Congress leader and former Himachal Pradesh Chief Minister, Virbhadra Singh, has passed away, battling a prolonged illness.
4. C
The Indian Railways has launched India’s first movable freshwater tunnel aquarium ‘Aquatic Kingdom’ at the Krantivira Sangolli Rayanna Railway Station, which is also known as Bengaluru City Railway Station.
5. D
E-Commerce company, Amazon has launched its first Digital Kendra in India in Surat, Gujarat.
6. B
A sandcastle in Denmark has entered into new Guinness World Record for being the tallest sandcastle in the world.
7. D
Social Media Giant Facebook has announced a set of publishing and subscription tools named Bulletin, aimed to promote independent writers in the US.
8. D
Central government has decided to bring Department of Public Enterprises (DPE) under finance ministry.
9. C
According to the UN agency, the high temperatures in Antarctica are a result of a large high-pressure system creating “fohn conditions”(In simple terms, this is a change from wet and cold conditions one side of a mountain, to warmer and drier conditions on the other (leeward) side.), which are downslope winds creating significant surface warming.
10. B
A new book titled “The Light of Asia” authored by Jairam Ramesh is a biography of an epic bio-poem on the Buddha.
11. A
The United States continues to be number 1 in the NewsOnAir Radio Live-stream Global Rankings.
12. D
The central government has set up a 25-member development council for the cement industry under Dalmia Bharat Group CMD, Puneet Dalmia.
13. D
Indian Naval Ship (INS) Tabar recently participated in military exercises with the frontline frigate of the Italian Navy. INS Tabar joined Italian Navy and entered Port of Naples on July 3 as part of the ongoing deployment in the Mediterranean.
14. A
Kerala government has proposed to have its own over-the-top (OTT) platform. The state government has planned to launch it by November 1.
15. B
Kiren Rijju is appointed as the new Union Law Minister. Kiren Rijiju is an Indian lawyer and politician from Arunachal Pradesh.
16. B
The Central Government has recently approved a package of Rs 23,123 Crores for the purpose of strengthening the health infrastructure in the country and to combat Covid. The main objective of this package is to increase 2.44 lakh beds in community and primary health centers in all the states of the country. Pediatric care units are to be created in 736 districts.
17. C
The International Cricket Council (ICC) recently removed the Chief Executive Officer Manu Sawhney from the global body of cricket with immediate effect. Now the ICC has said that the acting CEO Geoff Allardyce will continue to work closely with the ICC Executive Board.
18. C
A team of botanists from the Central University of Bathinda, Punjab has recently discovered a new species of plants in Antarctica. Botanists have given the name of this species “Bryum Bharatiensis”. This newly discovered species is the first and only plant species.
19. A
Nikola Tesla Day is celebrated all over the world on the birth anniversary of the American-Serbian inventor Nikola Tesla, popularly known as the mad scientist. The unit of magnetic field in physics is named Tesla after him.
20. C
Defense Research & Development Organization and All India Council for Technical Education have recently started a regular M.Tech program in Defense Technology. Under which it has been started to provide necessary theoretical and practical knowledge, skills and qualifications in the areas of Defense Technology.