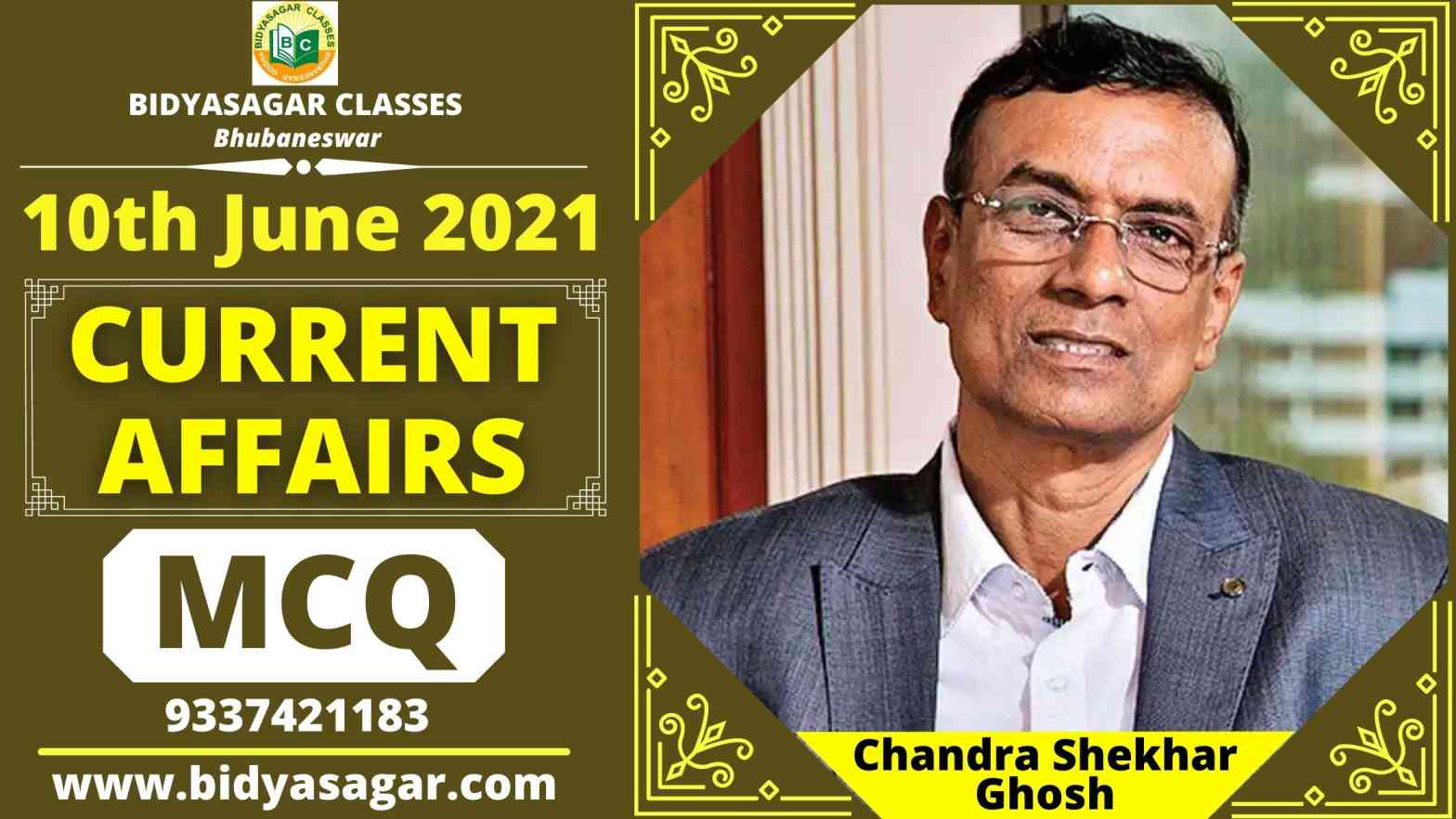 In this article, we will discuss MCQ on important current affairs of 10th June 2021 and their answers with explanations.

2.Which country has been elected as the member of the United Nations Economic and Social Council (ECOSOC) for 2022-24 from Asia-Pacific States?

4. G7 has recently signed a deal on Minimum Global Corporate Tax. As per the deal, the minimum global tax rate would be at least _______.

5. Who has assumed charge as the Director-General Naval Operations?

6. Which of the following state has climbed to the third spot in the Anemia Mukt Bharat Index 2020-21 national ranking with a score of 57.1?

B) I May Destroy You

C) Save Me Too

D) Once Upon a time in Iraq

9. Who has been appointed as the new Election Commissioner of India?

10. Who has bagged the number 1 spot on Times Most Desirable Women 2020 list?

12. Which of the following international organization has launched a new global database named “I-Familia”?

13.Which of the following state announced to creation of 80 acres of ‘Oxi-van’?

16. How many Indian Universities have been ranked in the top 200 of the QS World University Rankings 2022?

17. Anoop Chandra Pandey, who was the Chief Secretary of which of the following states, has been appointed as the new Election Commissioner of the country?

18. Which of these High Courts has recently announced a historic decision to use A-4 size paper instead of legal from now on?

19. Recently Ranjit Singh Disable has been appointed as the new education advisor of which specialized institution for the period June 2021 to June 2024?

20. The Union Cabinet has recently approved the allocation of 5 MHz spectrum in how many MHz frequency bands to Indian Railways?

World Accreditation Day (WAD) is celebrated every year on 9 June to promote the role of accreditation in trade & the economy.

India has been elected as a member of the United Nations Economic and Social Council (ECOSOC), one of the six main organs of the United Nations, for three-year terms of 2022-24. India was elected to the 54-member ECOSOC, by the UNGA on June 7, 2021, in the Asia-Pacific States category, along with Afghanistan, Kazakhstan, and Oman.

The domestic credit rating agency Crisil has revised the GDP growth estimate for India in FY22 (2021-22) to 9.5 percent, from the earlier estimate of 11 percent.

Group of Seven (G7) advanced economies signed a landmark deal on taxing multinational companies. As per the deal, the minimum global tax rate would be at least 15 percent.

Himachal Pradesh has climbed to the third spot in the Anemia Mukt Bharat Index 2020-21 national ranking with a score of 57.1.

Gujarat Maritime Board (GMB) will set up the country’s first international maritime services cluster at GIFT City. The maritime cluster will be developed as a dedicated ecosystem comprising ports, shipping, logistics services providers and government regulators, all present in the same geographic vicinity — GIFT City.

Drama Series “Save Me Too” has won the Best Drama award in the BAFTA TV Awards 2021.

The Reserve Bank of India has granted approval for the re-appointment of Chandra Shekhar Ghosh as MD and CEO of Bandhan Bank, for a period of three years.

Chief Minister of Haryana, Manohar Lal Khattar, announced to creation of 80 acres of ‘Oxi-van’ (a forest) in the Karnal district.

The Indian Navy inducted three indigenously-built advanced light helicopters ALH MK-III in their fleet. These helicopters are built by Hindustan Aeronautics Limited at the Indian Naval Station (INS) Dega in Visakhapatnam will be used for maritime reconnaissance and coastal security.

Recently Anoop Chandra Pandey, who was the Chief Secretary of the state of Uttar Pradesh, has been appointed as the new Election Commissioner of the country. He is a 1984 batch IAS officer. He retired in February 2019 itself but the state government extended his tenure for 6 months.

Recently Ranjit Singh Disable has been appointed as the new Education Advisor of the World Bank from June 2021 to June 2024. She was awarded the Global Teacher Award for promoting girls’ education and the campaign for QR code-based books.

The Union Cabinet has recently approved the allocation of 5 MHz spectrum in 700 MHz frequency band to Indian Railways for public rescue and security services in station premises and trains. There is an estimated investment of more than Rs 25,000 crore in this project. This project will be completed in the next 5 years.