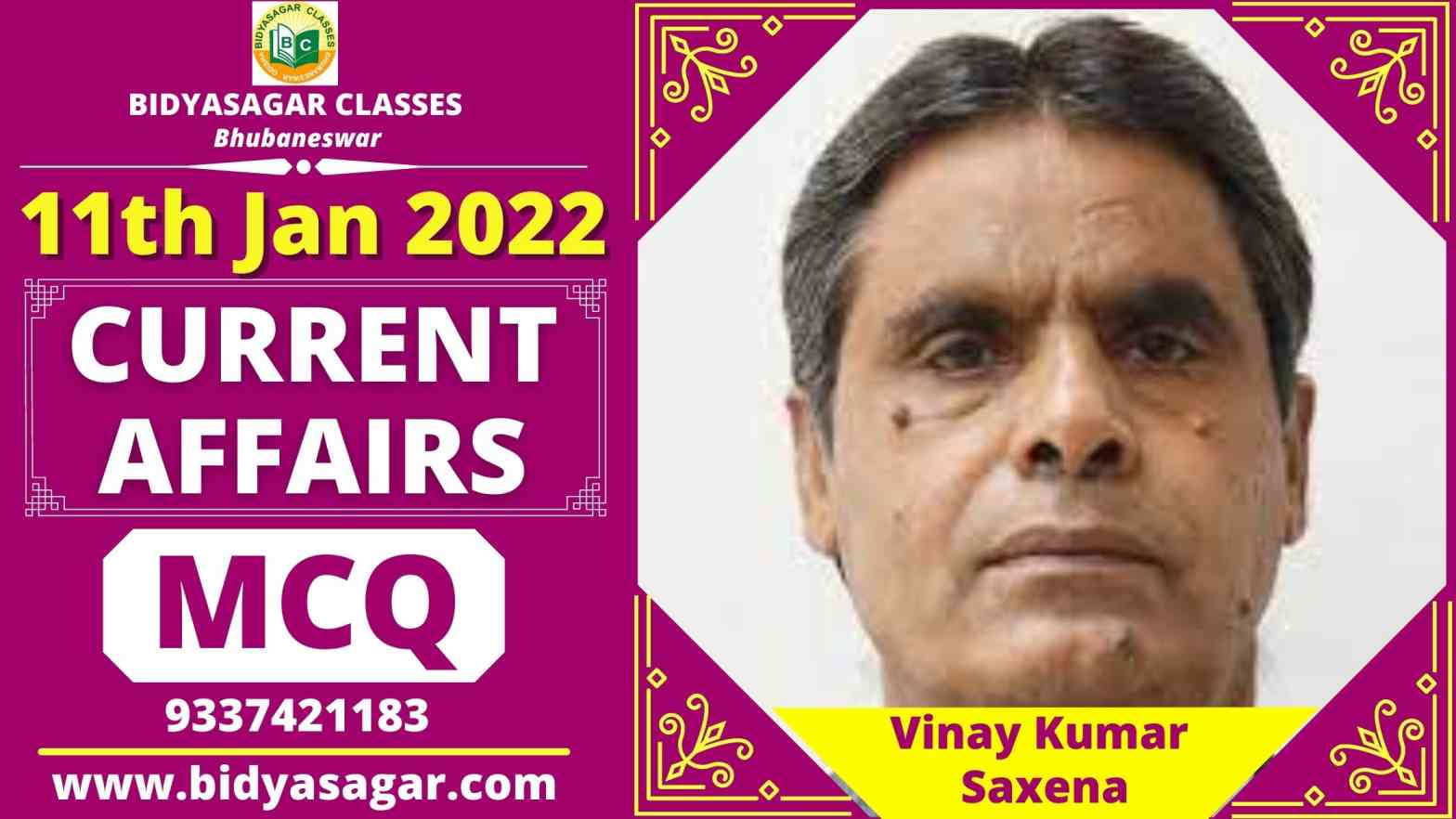 In this article, we will discuss MCQ on important current affairs of 11th January 2022 and their answers with explanations.

1. As per NSO’s first advance estimate, what is the estimated GDP growth rate of India in the fiscal 2021-22 (FY22)?
(a) 10.2%
(b) 8.2%
(c) 7.2%
(d) 9.2%
2. Ministry of External Affairs (MEA) has appointed which company as the service provider for the second phase of the Passport Seva Programme (PSP-V2.0)?
(a) Tech Mahindra
(b) Tata Consultancy Services
(c) HCL Technologies
(d) ITC Limited
3. In the latest SBI Ecowrap report, what is the projected GDP growth rate of India in FY22?
(a) 9.7%
(b) 9.1%
(c) 9.5%
(d) 9.3%
4. What is the latest value of foreign currency reserves of India as per the data by RBI?
(a) $621.581 billion
(b) $639.405 billion
(c) $642.453 billion
(d) $633.614 billion
5. Centre has recently extended the tenure of whom as the interim Chairperson of Insolvency and Bankruptcy Board of India (IBBI) till March 05, 2022?
(a) Sudhaker Shukla
(b) Navrang Saini
(c) Mukulita Vijayawargiya
(d) M. S. Sahoo
6. Which of the following state celebrates Losoong (Namsoong) Festival?
(a) Meghalaya
(b) Sikkim
(c) Tripura
(d) Assam
7. Who is the head of the 3-member committee constituted to enquire security lapses during PM Punjab visit?
(a) Ritesh Chauhan
(b) KR Manjunath
(c) Sudhir Kumar Saxena
(d) H Krishnamurthy
8. Japan has signed a ‘landmark’ defence treaty named the Reciprocal Access Agreement (RAA) with which country to counter China?
(a) Australia
(b) Thailand
(c) Canada
(d) India
9. Which Payments Bank has collaborated with Park+ to offer FASTag-based smart parking solutions?
(a) Paytm Payments Bank
(b) Airtel Payments Bank
(c) India Post Payments Bank
(d) Fino Payments Bank
10. Legends League Cricket (LLC) has appointed whom as an Ambassador to its All Women Match Official Team to promote Women’s Empowerment?
(a) Mithali Raj
(b) Smriti Mandhana
(c) Harmanpreet Kaur
(d) Jhulan Goswami
11. Who has received Dr Subhas Mukherjee Award from ICMR in recognition for his outstanding contribution to the field of in-vitro fertilization (IVF)?
(a) Danish Siddiqui
(b) Satish Adiga
(c) Buddhadeb Dasgupta
(d) Lakshmi Nandan Bora
12. Who among the following has won the World Rapid Chess Championship 2021?
(a) Ian Nepomniachtchi
(b) Magnus Carlsen
(c) Viswanathan Anand
(d) Nodirbek Abdusattorov
13. Rajnath Singh has recently inaugurated Kalpana Chawla Centre For Research In Space Science And Technology at ______.
(a) IIT Madras
(b) IISC Bangalore
(c) Punjab University
(d) Chandigarh University
14. The Government of India has extended the term of Navrang Saini, the interim chairman of the Insolvency and Bankruptcy Board of India, for how many months?
(a) 2 months
(b) 3 months
(c) 5 months
(d) 8 months
15. Which of the following company has announced the acquisition of 73.37 percent stake in premium luxury hotel Mandarin Oriental New York?
(a) Tata Limited
(b) Google
(c) Reliance Industries Limited
(d) Adani Group
16. Prime Minister Narendra Modi has recently announced to celebrate “Veer Bal Diwas” every year from the year 2022?
(a) June 26
(b) August 26
(c) 26 November
(d) 26 December
17. Which of the following ministry has recently signed an agreement with TCS for the second phase of Passport Seva programme?
(a) Ministry of Education
(b) Ministry of Tribals
(c) Ministry of Sports
(d) Ministry of Foreign Affairs
18. Professor Dr. Satish Adiga of which of these medical colleges has been selected by ICMR for the National Award?
(a) AIIMS Medical College
(b) Kasturba Medical College
(c) Kharagpur Medical College
(d) Pune Medical College

1. D
The National Statistical Office (NSO) has estimated India’s GDP to grow at 9.2 percent in the current fiscal, 2021-22. NSO released its first advance estimates of economic output on January 07, 2022.
2. B
The Ministry of External Affairs (MEA) has signed an agreement Tata Consultancy Services Limited (TCS) for the second phase of the Passport Seva Programme (PSP-V2.0).
3. C
In the report, SBI researchers have revised upwards the real GDP of India to around 9.5 percent in 2021-22 (FY22) on a year-on-year (YoY).
4. D
As per the latest Reserve Bank of India (RBI) data, the foreign currency reserves of India declined by $1.466 billion to $633.614 billion, in the last week of 2021, ended December 31, 2021.
5. B
The Centre has extended the tenure of Navrang Saini as interim Chairperson of Insolvency and Bankruptcy Board of India (IBBI) for three more months till March 05, 2022.
6. B
Losoong (Namsoong) is annually celebrated across the Indian State of Sikkim on the 18th day of the 10th month of the Tibetan Lunar Calendar, which also marks the beginning of the harvest season.
7. C
It is a three-member committee and will be headed by Sudhir Kumar Saxena, Secretary (Security), Cabinet Secretariat It also comprises Balbir Singh, Joint Director, IB and S. Suresh, IG, SPG.
8. A
Japan and Australia signed a ‘landmark’ defence treaty named the Reciprocal Access Agreement (RAA) to counter China’s expansionary military and economic policies.
9. B
Airtel Payments Bank and Park+ have collaborated to offer FASTag-based smart parking solutions to marquee commercial and residential properties across India.
10. D
Legends League Cricket (LLC) appointed Jhulan Goswami as an Ambassador to its All Women Match Official Team to promote Women’s Empowerment initiatives of the LLC and to increase participation of women in cricket.
11. B
Satish Adiga will receive Dr Subhas Mukherjee Award from ICMR in recognition for his outstanding contribution to the field of in-vitro fertilization (IVF). He has contributed significantly to both clinical IVF and fertility research.
12. D
Nodirbek Abdusattorov, from Uzbekistan, won the World Rapid Chess Championship 2021 by defeating Ian Nepomniachtchi (Russia) in a tiebreaker and dethroning Magnus Carlsen, the current World Number 1.
13. D
Defence Minister Rajnath Singh inaugurated Kalpana Chawla Centre for Research in Space Science and Technology (KCCRSST) at Chandigarh University.
14. B
The Government of India has recently extended the tenure of the Interim Chairman of Insolvency and Bankruptcy Board of India Navrang Saini for 3 months till March 05, 2022. He is a whole-time member of IBBI, was given the additional charge of chairman in October 2021 for three months till January 13, 2022 in addition to his existing duties.
15. C
Reliance Industries Limited has recently announced the acquisition of 73.37 percent stake in premium luxury hotel Mandarin Oriental New York. Cayman is the parent company of Mandarin Oriental Hotels. It had indirect ownership of a 73.37 percent stake in the hotel.
16. D
Prime Minister Narendra Modi has recently announced to celebrate “Veer Bal Diwas” every year from 26 December from the year 2022. The day will be observed as a tribute to the courage of the 4 Sahibzadas, who attained martyrdom in the 17th century.
17. D
Ministry of External Affairs has recently signed an agreement with TCS for the second phase of Passport Seva programme. TCS will be the service provider for the Passport Seva project, which it has been doing for over 10 years.
18. B
Dr. Satish Adiga, Professor, Department of Clinical Embryology at Kasturba Medical College has been selected for the National Award by ICMR. He will receive Dr. Subhash Mukherjee Award from ICMR for his outstanding contribution in the field of in-vitro fertilization.