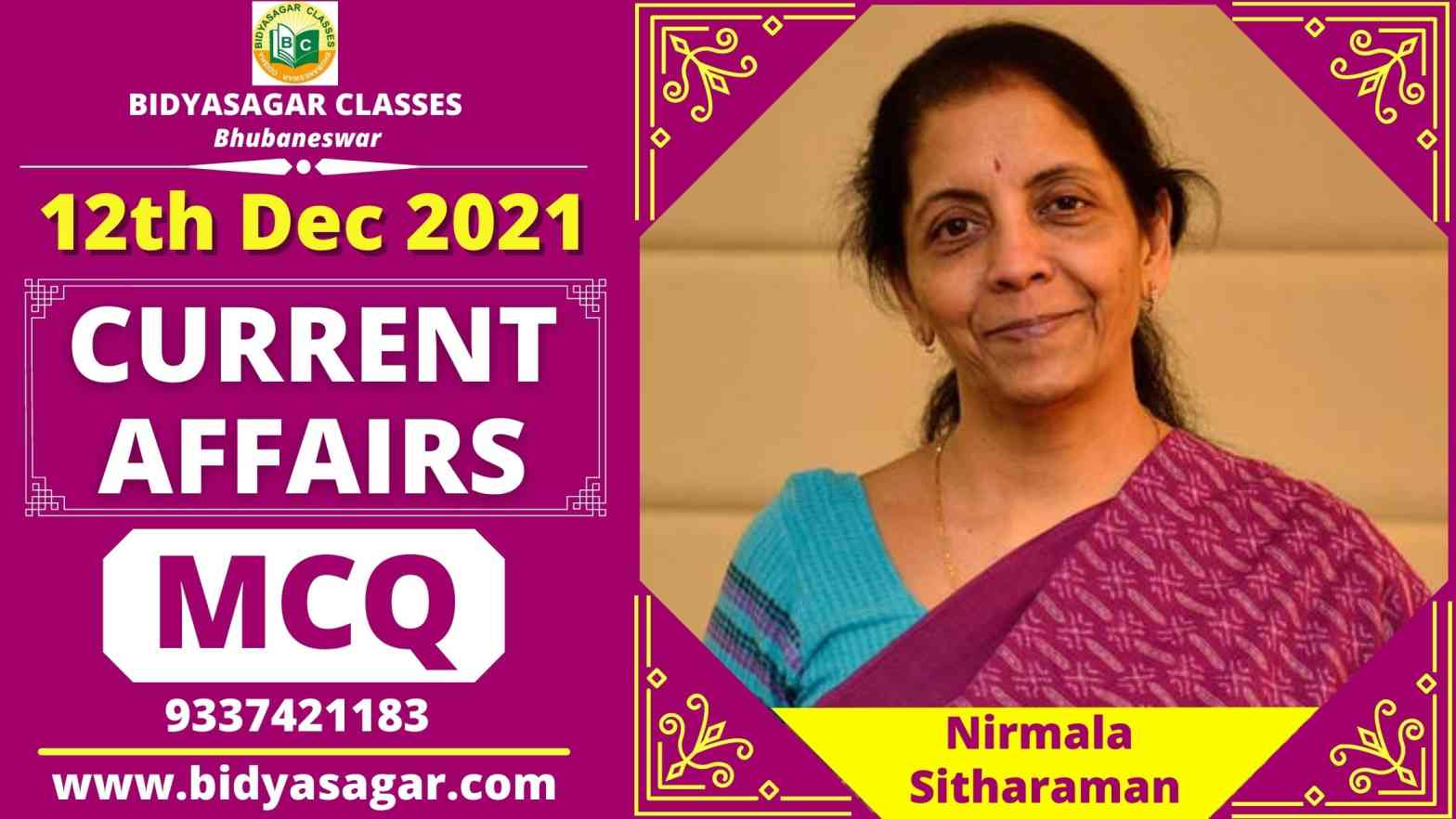 In this article, we will discuss MCQ on important current affairs of 12th December 2021 and their answers with explanations.

1. C
The Chief Minister of Uttarakhand, Pushkar Singh Dhami launched the ‘Milk Price Incentive Scheme‘ in Dehradun. The scheme is aimed to provide incentives benefiting around 53,000 people of Uttarakhand. The state government is targeting to spend INR 444.62 crore to open 500 milk sales centres in Uttarakhand.
2. B
Bharti Airtel and Invest India, National Investment Promotion and Facilitation Agency jointly launched ‘Airtel India Startup Innovation Challenge’ for Startups to develop solutions in 5G, IoT.
3. A
Fortune India released the list of most powerful women in India 2021 in which Union Minister, Ministry of Finance & Ministry of Corporate Affairs Nirmala Sitharaman ranked 1st.
4. D
India claimed 41 medals at 4th Asian Youth Para Games (AYPG), Asia’s biggest event held at Riffa city, Bahrain.
5. D
The Haiderpur Wetland abutting the Madhya Ganga barrage, about 10 km from Bijnor in western Uttar Pradesh, has been recognised under the 1971 Ramsar Convention on Wetlands, bringing the total number of such designated areas in the country to 47. Uttar Pradesh is now home to 9 Ramsar wetlands.
6. A
Royal Institute of British Architects (RIBA) has announced that Indian architect Balkrishna Doshi will be the recipient of the 2022 Royal Gold Medal.
7. D
The 9th edition of India Skills Report (ISR) 2022, released by Wheebox, Maharashtra has retained the top position in the list of states with the highest poll of employable talent followed by Uttar Pradesh and Kerala.
8. C
Federal Bank has entered into a Bancassurance partnership with Star Health and Allied Insurance Co Ltd as a corporate agent to provide health insurance products for the Bank’s 8.90 million customers across India.
9. D
The theme of this year’s International Mountain Day (IMD) on 11 December will be sustainable mountain tourism.
10. C
Microsoft company has recently started “Cyber Security Skills Program” with the aim of training more than 1 lakh learners by the year 2022. The aim of which is to give the students practical experience with the fundamentals of security, compliance and identity.
11. C
Paytm Payments Bank has recently been given Scheduled Bank status by Reserve Bank of India. Paytm Payments Bank has been included in the Second Schedule of the Reserve Bank of India Act, 1934. This bank supports 333 million Paytm wallet.
12. C
Uttarakhand Chief Minister Pushkar Singh Dhami has recently launched “Milk Price Promotion Scheme” in Dehradun to give incentives to benefit about 53,000 people of the state. The Uttarakhand government has set a target of spending Rs 444.62 crore to open 500 milk sales centers in Uttarakhand.
13. B
Defense Research and Development Organization (DRDO) and Indian Air Force (IAF) have recently successfully test-fired an indigenously built stand-off anti-tank missile in the Pokhran range. This missile has been developed in coordination with the Research Center of Hyderabad and laboratories of DRDO and with the participation of industries.
14. B
Prime Minister Shri Narendra Modi has recently inaugurated the Saryu Canal National Project in Balrampur, Uttar Pradesh. The Prime Minister said that when work started on this project, its cost was less than Rs 100 crore.
15. D
NITI Aayog has recently planned to set up 1000 Atal Tinkering Labs in Jammu and Kashmir. Whereas in the financial year 2021-22, 187 out of 1000 Atal Tinkering Laboratories will be established. Atal Tinkering Lab is a sub-mission in India under the Atal Innovation Mission of the Central Government.
16. B
IndiGo is the first airline in India to launch the ESG report. IndiGo has signed an agreement with CSIR-IIP Dehradun to join hands in deployment of sustainable aviation fuel in India and around the world. Under which IndiGo and CSIR-IIP will arrange projects for SAF based on techno-commercial feasibility.
17. C
IMD World Competitive Center has recently published its “World Talent Ranking Report”. Switzerland has ranked first in this report. The UAE continues to improve its global talent rankings.
18. D
Secretary-General Antonio Guterres recently appointed US President Joe Biden’s assistant Katherine Russell as the head of the United Nations Agency for the United Nations Children’s Fund (UNICEF).