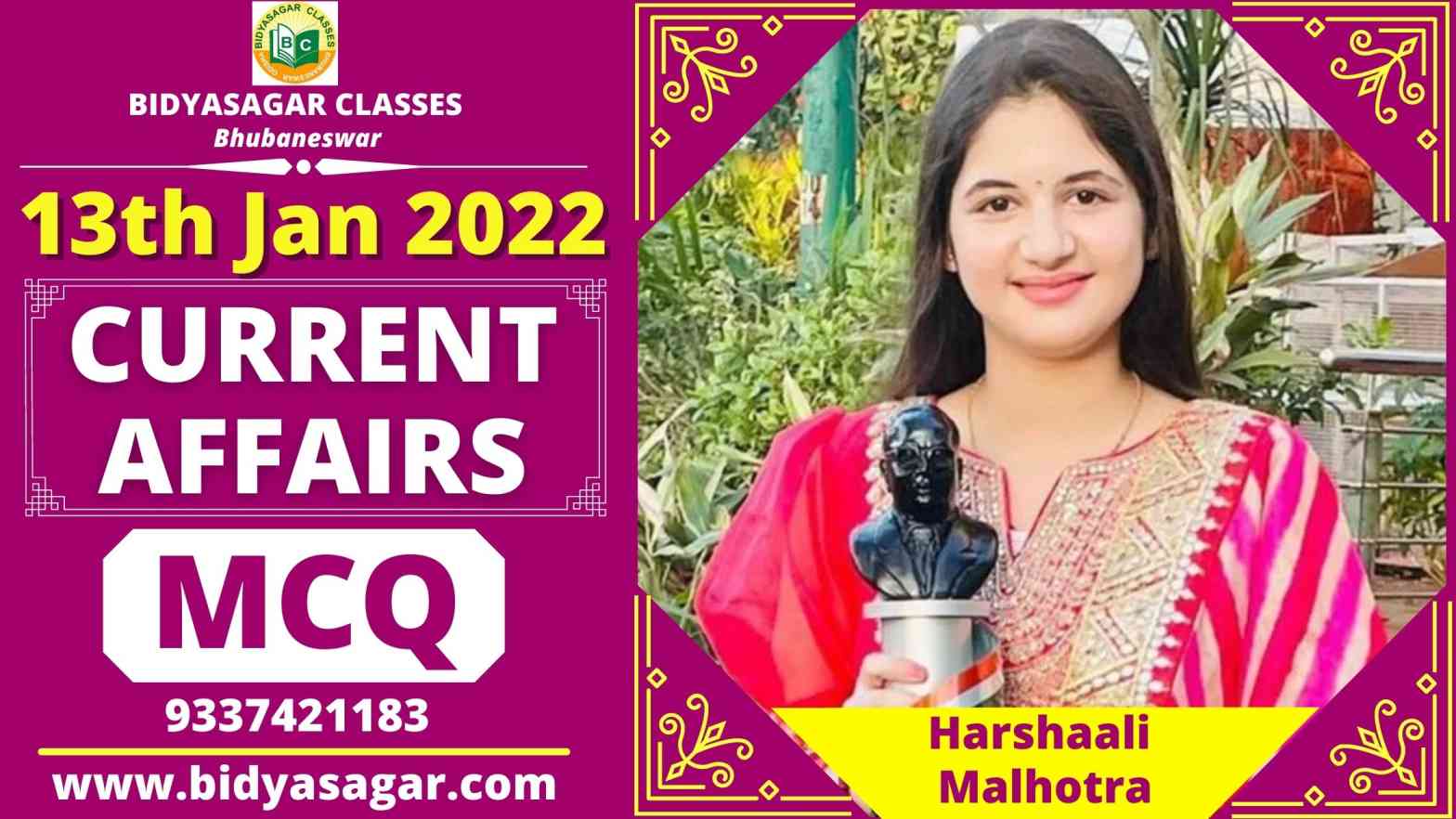 In this article, we will discuss MCQ on important current affairs of 13th January 2022 and their answers with explanations.

1. Who has been named as the new chief economist of the International Monetary Fund (IMF)?
(a) Pablo Moreno Garcia
(b) Pierre-Olivier Gourinchas
(c) Paul Hilbers
(d) Piotr Trabinski
2. How many total athletes are there currently in the list of athletes selected for Target Olympic Podium Scheme (TOPS)?
(a) 294
(b) 107
(c) 301
(d) 415
3. Chris Morris who has announced retirement from all forms of cricket, represented which country?
(a) England
(b) Australia
(c) New Zealand
(d) South Africa
4. Who among these has been awarded with the 12th Bharat Ratna Dr Ambedkar Award 2022?
(a) Sara Ali Khan
(b) Janhvi Kapoor
(c) Nora Fatehi
(d) Harshaali Malhotra
5. Name the mission launched by the Western zone of the Indian Railways to track lost belongings of passengers.
(a) Mission Amanat
(b) Mission Dharohar
(c) Mission Nidhi
(d) Mission Hifazat
6. DRDO recently test fired naval variant of BrahMos supersonic cruise missile. Which destroyer ship was used for testing the missile?
(a) INS Rajput
(b) INS Chennai
(c) INS Visakhapatnam
(d) INS Kolkata
7. David Sassoli who has passed away recently was the President of which of these organizations?
(a) European Commission
(b) European Parliament
(c) European Council
(d) European Central Bank
8. Which city has become India’s first city to have a Water Metro Project after the launch of its first boat in December 2021, namely ‘Muziris’?
(a) Aurangabad
(b) Bhopal
(c) Kochi
(d) Mysuru
9. Who has been appointed as the head of the RBI’s department for “FinTech”?
(a) Ajay Kumar Choudhary
(b) Deepak Kumar
(c) Ajay Kumar
(d) T Rabi Sankar
10. Chandrashekhar Patil, popularly known as “Champa” was a prominent writer who belonged to which Indian language?
(a) Konkani
(b) Gujarati
(c) Marathi
(d) Kannada
11. Which of the following will get India’s first heli-hub with all aviation facilities?
(a) Chennai
(b) Kochi
(c) Guwahati
(d) Gurugram
12. The International Cricket Council (ICC) has announced Ajaz Patel as the winner of the ICC Men’s Player of the Month. He is a cricketer who plays for________.
(a) Pakistan
(b) New Zealand
(c) India
(d) Afghanistan
13. Which edition of the North East Festival has recently concluded in Guwahati?
(a) 6th
(b) 7th
(c) 8th
(d) 9th
14. Which state has finished first out of 26 states and union territories in the ‘India Skills 2021’ contest?
(a) Maharashtra
(b) Kerala
(c) Odisha
(d) New Delhi
15. Who has recently been appointed by the International Monetary Fund as its new Chief Economist?
(a) Gita Gopinath
(b) Pierre-Olivier Gaurynchus
(c) James Cameron
(d) Alex Halter
16. Which country’s passport has topped the list of powerful passports for the first quarter of 2022 released by the Henley Passport Index, along with Japan?
(a) America
(b) Australia
(c) Africa
(d) Singapore
17. Google and which bank have recently tied up to boost the bank’s customer experience strategy?
(a) Bank of Baroda
(b) Canara Bank
(c) Yes Bank
(d) RBL Bank
18. What is the rank of Chennai International Airport in the global list for “On Time Performance” for the year 2021?
(a) 5th Position
(b) I7th Position
(c) 8th Position
(d) 9th Position
19. Which of the following fame actress has recently been awarded the 12th Bharat Ratna Dr Ambedkar Award 2022?
(a) Divya Khosla
(b) Divya Kapoor
(c) Sania Sahu
(d) Harshaali Malhotra
20. Which of the following bank has recently set up a separate internal department for fintech?
(a) State Bank Of India
(b) HDFC Bank
(c) Bank of Baroda
(d) Indusland Bank

1. B
French-born economist Pierre-Olivier Gourinchas has been named as the next chief economist of the International Monetary Fund (IMF).
2. C
With the 10 new addition, the total number of athletes under TOPS has increased to 301, which includes 107 in the Core group while 294 in Development group.
3. D
South African all-rounder Chris Morris has announced his retirement from all forms of cricket.
4. D
The 2015 film Bajrangi Bhaijaan fame actress Harshaali Malhotra has been awarded the 12th Bharat Ratna Dr Ambedkar Award 2022.
5. A
The Railway Protection Force (RPF) of the Western Railways zone of Indian Railways has launched a new initiative called “Mission Amanat” to make it easier for the railway passengers to get back their lost luggage.
6. C
This advanced sea to sea variant of BrahMos Supersonic Cruise missile was launched from INS Visakhapatnam, a stealth guided-missile destroyer of the Indian Navy.
7. B
The European Parliament President David Sassoli has passed away due to health issues. He was 65.
8. C
Kochi, Kerala has become India’s first city to have a Water Metro Project after the launch of its first boat in December 2021, namely ‘Muziris,’ among the 23 battery-powered electric boats being manufactured by Cochin Shipyard Limited.
9. A
Reserve Bank of India (RBI) has set up a separate internal department for fintech (Financial technology) by subsuming the fintech division of DPSS (department of payment and settlement systems), Central Office (CO) to facilitate innovation, and help identify, address challenges and opportunities in the fintech sector.
10. D
Prominent Kannada writer Chandrashekhar Patil, popularly known as “Champa”, passed away at the age of 82. Champa was a Kannada language activist, a poet and a playwright and also served as President of the Kannada Sahitya Parishat (KSP) and Chairman of the Kannada Development Authority.
11. D
Haryana Deputy CM Dushyant Chautala announced that Gurugram will get India’s 1st heli-hub with all aviation facilities. The heli-hub will be the first of its kind in India to have all facilities at one place for helicopters. The heli-hub is proposed to be built in Gurugram & would be near the metro facility along with easy connectivity to industrial areas(Noida & Bhiwadi).
12. B
The International Cricket Council (ICC) has announced Ajaz Patel as the winner of the ICC Men’s Player of the Month Award for December 2021. New Zealand’s, Ajaz Patel made history in December, when he picked up 10 wickets in an innings against India at Wankhede, becoming only the third player in Tests to achieve that feat after Jim Laker and Anil Kumble.
13. D
The 9th edition of the North East Festival concluded in Guwahati, Assam. The main purpose of this festival is to promote and highlight the commercial and tourism potential of the North East region.
14. C
Odisha finished first out of 26 states and union territories of this year in the ‘IndiaSkills 2021’ contest with 51 medals. Odisha won 10 gold, 18 silver, 9 bronze, and 14 medallions.
15. B
The International Monetary Fund has recently appointed Pierre-Olivier Gourinches as its new Chief Economist. He will succeed Gita Gopinath. Pierre-Olivier Gourinches is currently the director of the Clauson Center for International Business and Policy at the University of California.
16. D
Singapore’s passport has been ranked first along with Japan in the list of powerful passports for the first quarter of 2022, released by the Henley Passport Index. India has been ranked 83rd in the released Henley Passport Index. Whereas India’s passport was ranked 90th last year. Indian passport now allows you visa-free access to 60 countries.
17. D
RBL Bank and Google have recently entered into an agreement to boost the customer experience strategy of the bank. Through which, the bank will expand its value proposition to serve its rapidly growing customer base through the digital platform, Abacus 2.0.
18. C
Chennai International Airport has been ranked 8th in the global list for “timely performance” for the year 2021. According to the latest traffic data of Chennai Airport, it has recovered 80 percent of the domestic traffic. It is the sixth busiest airport in India.
19. D
The 2015 film Bajrangi Bhaijaan’s fame actress Harshali Malhotra has recently been awarded the 12th Bharat Ratna Dr. Ambedkar Award 2022. He has been honored by the Governor of Maharashtra Shri Bhagat Singh Koshyari for his commendable performance and contribution in the field of Indian cinema.
20. A
State Bank of India has recently set up a separate internal department for fintech. A new department has been created with effect from January 04, 2022 by incorporating Fintech Division of the Department of Payment and Settlement Systems, Central Office.