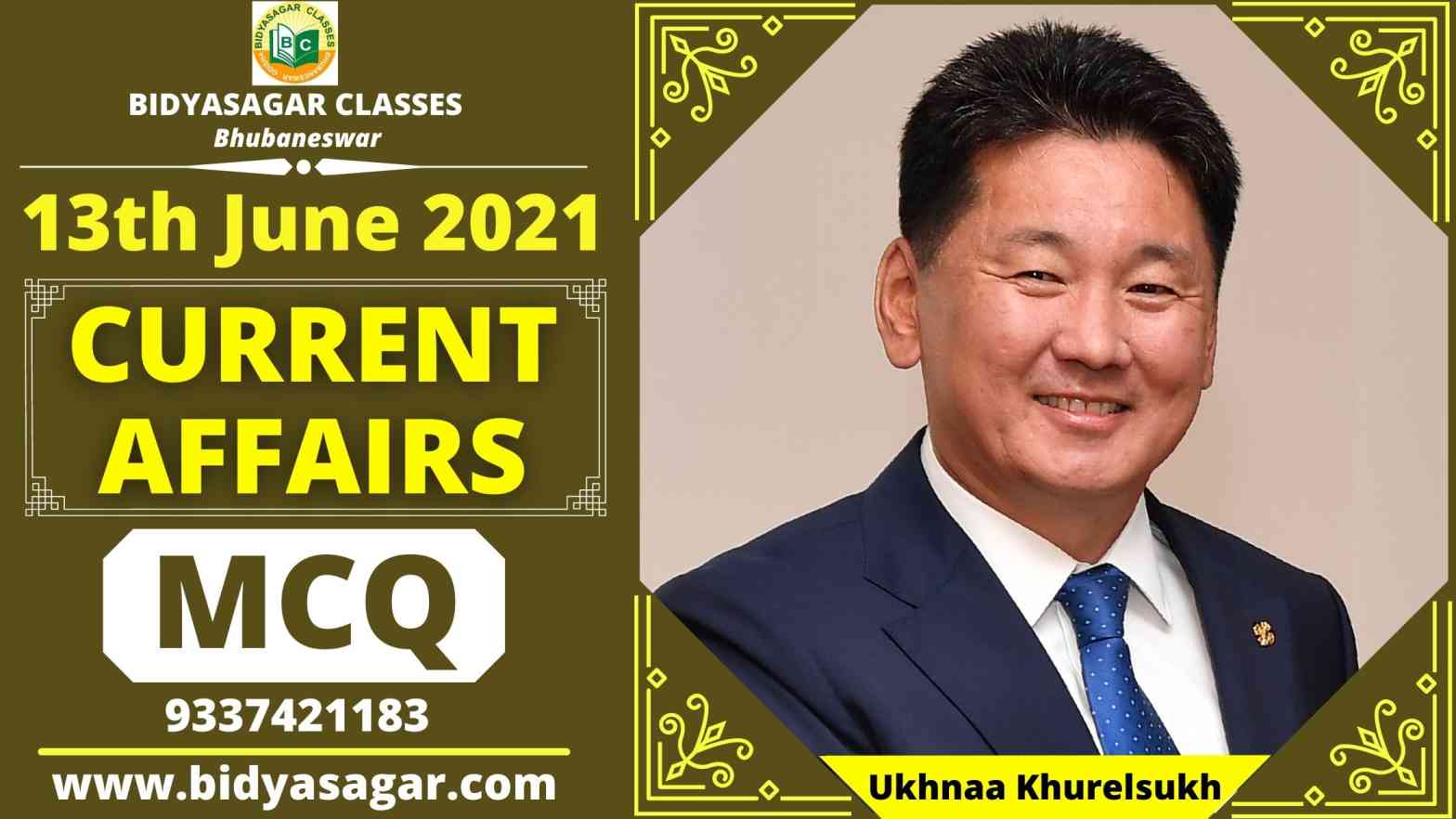 In this article, we will discuss MCQ on important current affairs of 13th June 2021 and their answers with explanations.

1. Ukhnaa Khurelsukh has become the president of which of the following country?

2. According to the RBI’s new ATM cash withdrawal rule, what is the new charge on ATM withdrawal beyond free transaction limit, with effect from January 1, 2022?

4. Which day is observed as World Day Against Child Labour?

5. Who has been elected to the International Association of Ultrarunners Council as an Asian representative?

6. Which of the following bank has launched a collateral-free “Kavach Personal Loan” to enable its customers to meet medical expenses of self and family members for Covid treatment?

A) Bank of Baroda

8. What is the theme of World Day Against Child Labour 2021?

A) Children shouldn’t work in fields, but on dreams!

11. Which award has been announced recently to Darnella Frazier, a black girl who made a video of the murder of George Floyd at the hands of the police in America?

D) None of These

12. Which Indian-origin journalist living in Britain has been announced to be awarded the Pulitzer Prize for Journalism in America?

13. Which of the following has recently launched the Central Athlete Injury Management System for the training of athletes?

14. In which sport Neeraj Chopra has won the gold medal in the men’s athletics meet in Portugal’s Lisbon Athletics Meet?

15. Which environmentalist has been appointed to an international advisory group for climate action recently?

16. Letesenbet Gidi of which of these countries has recently set a new world record in the women’s 10,000 meters race?

17. The International Olympic Committee has announced to give Brisbane to host the Olympics for which year?

18. India and which country have recently signed MoU for cooperation on recruitment of Indian workers?

Bank customers will have to pay Rs 21 (currently it is Rs 20) for each ATM cash withdrawal beyond the free transaction limit in effect from January 1, 2022.

DBS has been named by Forbes in their list of World’s Best Banks 2021. DBS was ranked #1 out of 30 domestic and international banks in India for the second consecutive year.

World Day Against Child Labour is observed globally on 12th June every year. According to the International Labour Organization (ILO), there are about 152 million children globally who are engaged in child labor, 72 million of whom are in hazardous work.

India’s Nagraj Adiga has been elected as the Asia-Oceania Representative at the recently concluded 2021 International Association of Ultrarunners (IAU) Congress at which the IAU council elections were held.

State Bank of India (SBI) has launched a collateral-free “Kavach Personal Loan” to enable its customers to meet medical expenses of self and family members for Covid treatment.

The Athletics Federation of India (AFI), announced that the Indian Grand Prix 4 will be held on June 21 at the National Institute of Sports in Patiala.

The theme of this year’s World Day Against Child Labour is Act now: End child labor!.

Noted Kannada poet, playwright, and Dalit activist, Siddalingaiah has passed away, due to Covid-19 related ailments.

Recently the Pulitzer Awards have been announced, this time a special award has also been announced. In America, on May 25, a black man George Floyd was suffocated by a police officer, at that time Darnella Frazier, a black girl who made a video of the murder at the hands of the police has been announced to be honored with a Special Pulitzer Award.

Megha Rajagopalan, an Indian-origin journalist living in the UK, has recently been announced to be honored with the Pulitzer Prize, America’s biggest journalism award. He had uncovered the prisons and detention camps built by the investigation to keep Uighur Muslims imprisoned in China.

Sports Minister Shri Kiren Rijiju has recently launched the Central Athlete Injury Management System for the training of athletes in Olympics 2024 and onwards. This is a first-of-its-kind initiative by the Sports Ministry to streamline sports medicine and convalescence assistance to athletes.

Recently, environmentalist Sunita Narain has been appointed by the Swedish Minister of International Development Cooperation to an International Advisory Group for Climate Action. Sunita Narayan is a great supporter of green politics and renewable development.

Indian Ambassador Sibi George and Kuwait’s Deputy Minister of Foreign Affairs Majdi Ahmed Al-Dhafiri have recently signed a Memorandum of Understanding for cooperation on the recruitment of Indian workers. This agreement brings Indian domestic workers within one legal framework.