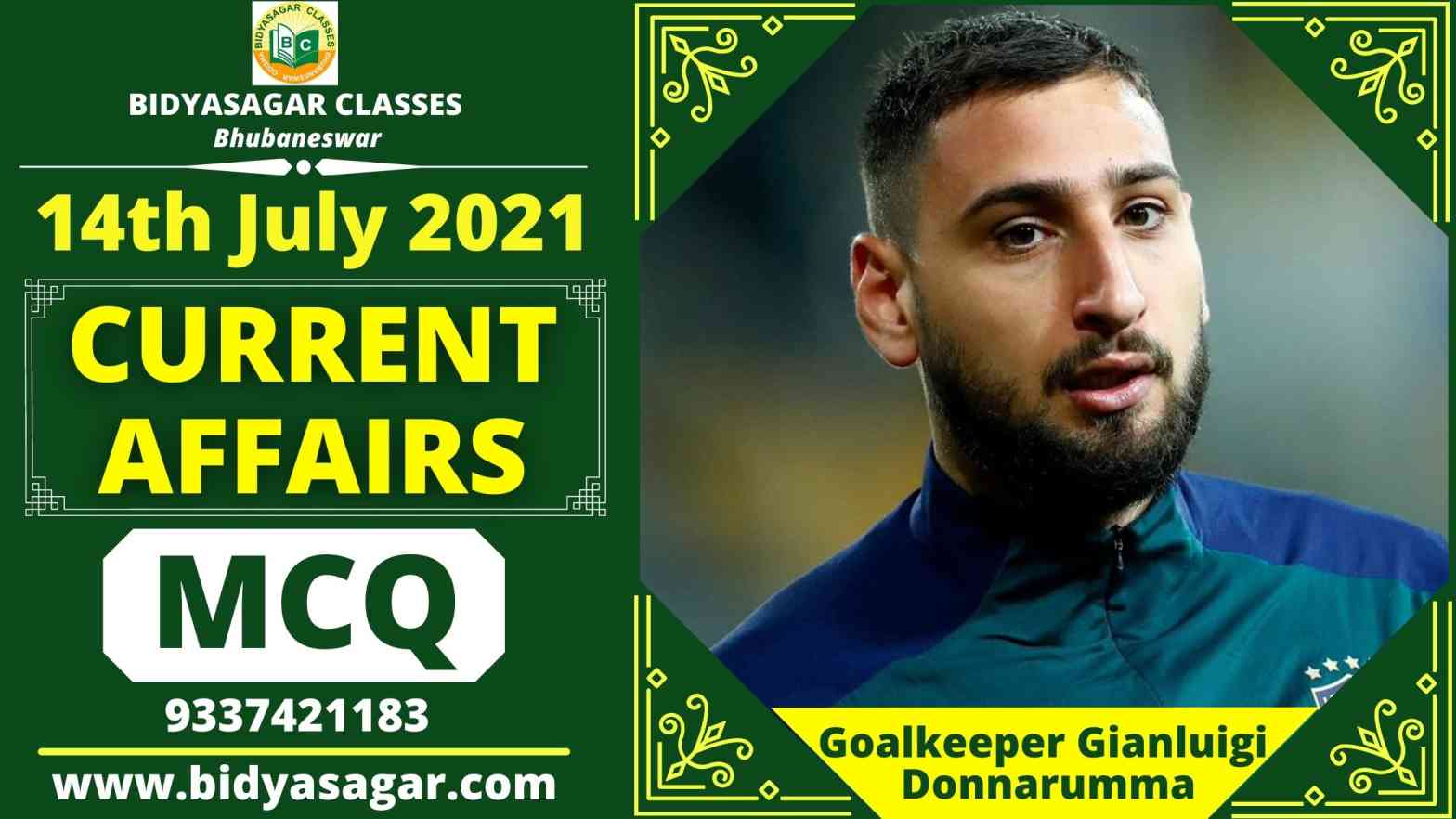 In this article, we will discuss MCQ on important current affairs of 14th July 2021 and their answers with explanations.

1. Which of the following football team has won the European Championship 2020?
A. Oman
B. Italy
C. Canada
D. England
2. Who was adjudged the player of UEFA EURO 2020?
A. Gianluigi Donnarumma
B. Harry Kane
C. Giorgio Chiellini
D. Kylian Mbappé
3. Indian Council for Cultural Relations (ICCR) will set up the ‘Bangabandhu Chair’ at the Delhi University to promote the diplomatic ties between India and which country?
A. Nepal
B. Sri Lanka
C. Bhutan
D. Bangladesh
4. Name the “ICC Women Player of the Month” for June.
A. Sneh Rana
B. Shafali Verma
C. Ellyse Perry
D. Sophie Ecclestone
5. Who among the following has been named as “ICC Men Player of the Month” for June?
A. Rohit Sharma
B. Quinton de Kock
C. Kyle Jamieson
D. Devon Conway
6. Which state will organise the Khelo India Youth Games 2021 in February 2022?
A. Haryana
B. Gujarat
C. Uttar Pradesh
D. Goa
7. Which of the following state to create new department for indigenous faith and culture?
A. Uttarakhand
B. Assam
C. Tripura
D. Kerala
8. Who among the following has won the Euro 2020 Golden Boot?
A. Lionel Messi
B. Neymar
C. Cristiano Ronaldo
D. Kylian Mbappe
9. IIT Madras and _______ India team up to host SAMVEDAN 2021.
A. Oneplus
B. Dell
C. HCL
D. Sony
10. Which of the following state has tied up with the National Insurance Company Ltd. for insuring Himalayan Yak?
A. Sikkim
B. Arunachal Pradesh
C. Himachal Pradesh
D. West Bengal
11. Who among the following has been selected for the Bahrain Keraleeya Samajam (BKS)’s Literary Award for 2021?
A. Om Prakash Devrani
B. Ranjit Singh Rana
C. Omchery N N Pillai
D. Girish Kumar Thakur
12. Name the author of the book ‘The Art of Conjuring Alternate Realities: How Information Warfare Shapes Your World’.
A. Neil Gaiman and Terry Pratchett
B. Shivam Shankar Singh and Anand Venkatanarayanan
C. Lisa Lutz and David Hayward
D. Jodi Picoult and Samantha van Leer
13. “The Struggle Within: A Memoir of the Emergency”, a book has been written by whom among the following?
A. Jairam Ramesh
B. Salman Rushide
C. Arundati Roy
D. Ashok Chakravarti
14. Rail Cargo movement between India and _______ gets a big boost.
A. Nepal
B. Bangladesh
C. Bhutan
D. Myanmar
15. Which of the following state has launched a population policy that aims to incentivise couples who do not have more than two babies?
A. Kerala
B. Jharkhand
C. Odisha
D. Uttar Pradesh
16. In which state of India the country’s first cryptogamic garden has been inaugurated?
A. Kerala
B. Gujarat
C. Maharashtra
D. Uttarakhand
17. Indian-origin Sirisha Bandla has recently become which Indian-origin woman to fly in space?
A. First
B. Second
C. Third
D. Fourth
18. Which union territory has become the first union territory to vaccinate all residents and guest population?
A. Dada Nagar Haveli
B. Ladakh
C. Delhi
D. Mumbai
19. Khadi and Village Industries Commission has recently registered “Khadi” trademark in how many Countries?
A. 2 Countries
B. 3 Countries
C. 4 Countries
D. 5 Countries
20. West Indies’ explosive batsman Chris Gayle has recently become the first batsman to score how many Thousand Runs in T20 cricket?
A. 10 Thousand Runs
B. 12 Thousand Runs
C. 14 Thousand Runs
D. 16 Thousand Runs

1. B
The European Championship final pits England and Italy against each other. Italy won 3-2 on penalties.
2. A
Italy’s Goalkeeper Gianluigi Donnarumma named player of UEFA EURO 2020. Italy defeated England in the UEFA Euro 2020 final in penalty shootout after the score was tied at 1-1 after extra time.
3. D
Delhi University will have a ‘Bangabandhu Chair’ to foster a better understanding of developments in Bangladesh. An MoU was signed between the Indian Council for Cultural Relations (ICCR) and Delhi University in Dhaka to set up this Chair at Delhi University.
4. D
England Left-arm spinner Sophie Ecclestone has been named as ICC Women Player of the Month for June. She is the second English female to win the title after Tammy Beaumont, who was awarded the title in February 2021.
5. D
In Men’s category, New Zealand opener Devon Conway has bagged ICC Player of the Month for June. He became the first New Zealand player to win the award after an astounding first month in Test cricket.
6. A
The state government of Haryana will organise the Khelo India Youth Games 2021 in February 2022.
7. B
The Assam Cabinet has announced the creation of an independent department to protect and preserve the “faith, culture and traditions of tribes and indigenous communities” of the state.
8. C
Portugal captain and modern-day great Cristiano Ronaldo won the Euro 2020 Golden Boot after finishing as the top-scorer in the tournament.
9. D
IIT Madras Pravartak Technologies Foundation (IITM-PTF) and Sony India Software Centre Pvt Ltd have joined hands to organise a national-level hackathon named ‘SAMVEDAN 2021 – Sensing Solutions for Bharat’.
10. B
National Research Centre on Yak (NRCY) in West Kameng district, Arunachal Pradesh has tied up with the National Insurance Company Ltd. for insuring Himalayan Yak.
11. C
Journalist and playwright Omchery N N Pillai has been selected for the Bahrain Keraleeya Samajam (BKS)’s Literary Award for 2021.
12. B
A new book titled ‘The Art of Conjuring Alternate Realities: How Information Warfare Shapes Your World’, authored by Shivam Shankar Singh and Anand Venkatanarayanan. The Book is Published by HarperCollins.
13. D
A book titled “The Struggle Within: A Memoir of the Emergency” authored by Ashok Chakravarti. He is an economist who has been providing policy advice to countries, mainly in the African region, for the past forty years.
14. A
India and Nepal have signed a Letter of Exchange(LoE) to revise the 2004 India-Nepal Rail Services Agreement (RSA).
15. D
Uttar Pradesh chief minister Yogi Adityanath has launched a population policy that aims to incentivise couples who do not have more than two babies.
16. D
The country’s first cryptogamic garden has been inaugurated in Dehradun, Uttarakhand, India. It was inaugurated by social worker Anoop Nautiyal in Devban area of Chakrata city, Dehradun, Uttarakhand. About 50 species of ferns, fungi, algae, bryophytes and lichens are available in this park.
17. B
Sirisha Bandla of Indian origin has recently become the second woman of Indian origin to fly in space. She was one of six crew members aboard Richard Branson’s Virgin Galactic flight. She is currently Vice President of Government Affairs and Research at spacecraft maker Virgin Galactic.
18. B
The Union Territory of Ladakh has recently become the first Union Territory to vaccinate all residents and guest population. In which migrant laborers, hotel workers and Nepali citizens who earn their livelihood in the area are also included.
19. B
Khadi and Village Industries Commission has recently registered “Khadi” trademark in 3 Countries Mexico, Bhutan and UAE. The commission obtained trademark registration in Bhutan on July 9, while the UAE allowed trademark registration on June 28, 2021.
20. C
West Indies’ explosive batsman Chris Gayle recently became the first batsman to score 14,000 runs in T20 cricket. In the third T20 match against Australia, he made this record by playing a stormy innings of 67 runs in 38 balls. Chris Gayle crossed the 50-run mark for the first time in T20 Internationals after scoring an unbeaten 100 against England in March 2016.