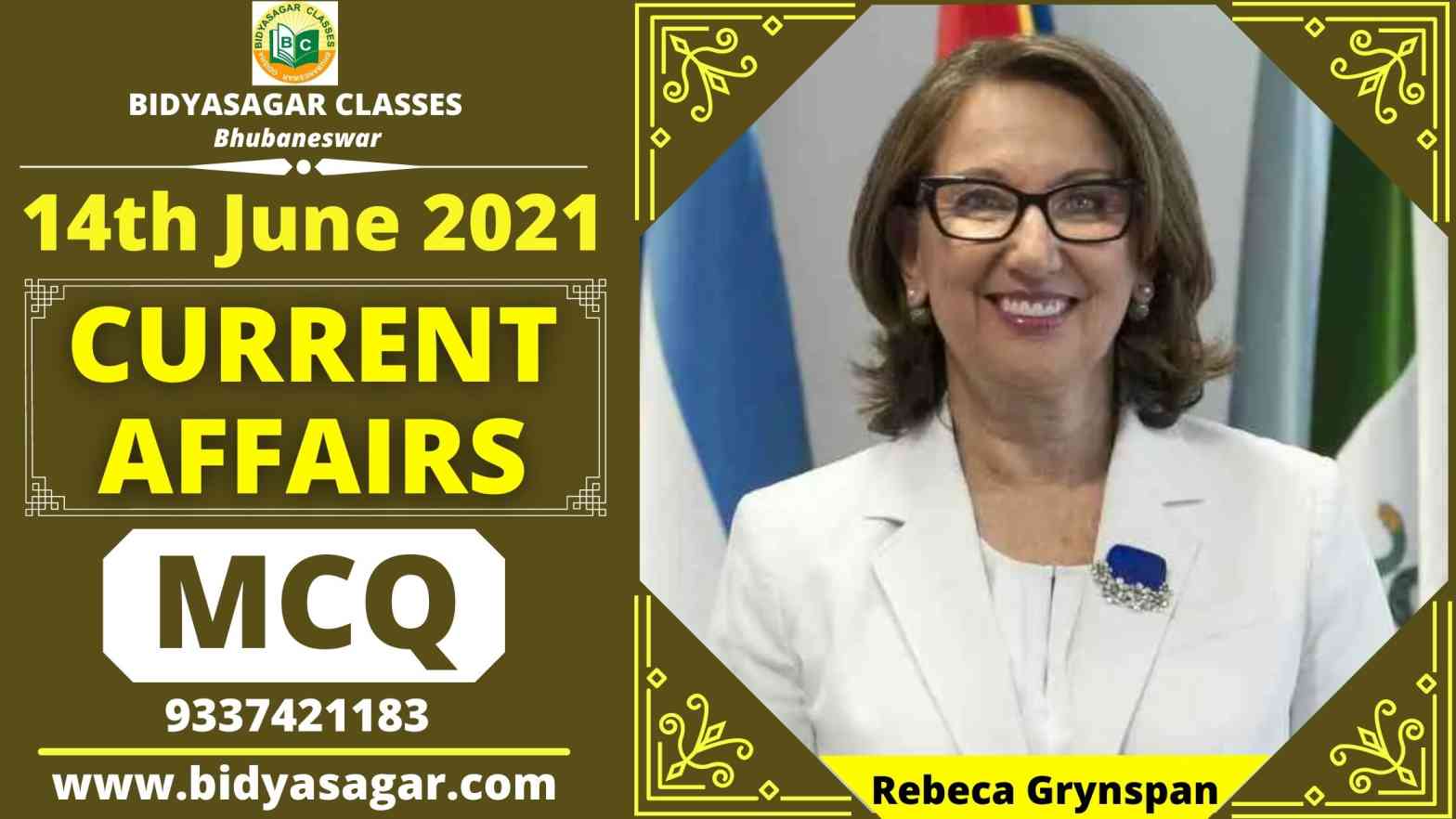 In this article, we will discuss MCQ on important current affairs of 14th June 2021 and their answers with explanations.

1. Which bank has launched the ‘Ghar Ghar Ration’ Program for its customers?

2. Who has been appointed as the Secretary-General of UNCTAD?

4. As per the RBI data, India’s FOREX reserve has crossed the USD ____ billion marks for the first time.

6. Russia will supply advanced satellites to ______ for tracking military targets.

7. Which bank has launched ‘Kavach Personal Loan’ for COVID-19 patients?

A) State Bank of India

B) Bank of Maharashtra

9. Who will be the Match Referee of the final match of the World Test Championship?

11. Professor Mukesh Sharma of which of the following IIT institute has been appointed as an honorary member of WHO GAPH-TAG?

12. Union Education Minister Ramesh Pokhriyal Nishank has recently released Rs 7,622 crore to the states and union territories under which scheme?

13. Which Indian state’s head of the world’s largest family, Ziona Chana, has passed away recently?

14. Which day is celebrated across the world on 14th June?

15. Defense Minister Shri Rajnath Singh has recently approved budgetary support of Rs 498.8 crore for innovation in the defense sector for how many Years?

16. Which female player from the Czech Republic has recently won the women’s singles title in French Open Tennis?

17. G-7 leaders have recently launched B3W to counter the Belt and Road Initiative of which country?

18. Which country’s economist Rebecca Grinspan has been appointed as the new Secretary-General of the United Nations Conference on Trade and Development?

IDFC First Bank has launched the ‘Ghar Ghar Ration’ Program for the customers whose livelihoods have been affected by the COVID-19 pandemic. It is an employee-funded program for its low-income customers.

Rebeca Grynspan has been appointed as the Secretary-General of the United Nations Conference on Trade and Development. She has served as the Vice-President of Costa Rica.

Karadi Path has received International Excellence Award from London Book Fair for its educational learning resources. It is the only firm in India to win the award for this year.

As per the RBI data, India’s foreign exchange (FOREX) reserve has USD 600 billion mark for the first time. India’s Gold reserves fell down to USD 37.604 billion after a decline of USD 502 million.

Pioneer of Organic Farming in India, Radhe Mohan passed away recently at the age of 78 years. He served as Information Commissioner of Odisha and is also a Padma Shri awardee.

Russia will supply advanced satellites to Iran for tracking potential military targets across the Middle East region. Russian signed a deal to offer its Kanopus-V satellite to Iran.

State Bank of India has launched ‘Kavach Personal Loan’ for COVID-19 patients. This will facilitate its customers in meeting the medical expenses of their family members.

Tilotma Shome has won the ‘Best Actor award at the 2021 UK Asian Film Festival. She was awarded for her role in ‘Raahgir: The Wayfarers’ directed by Goutam Ghose.

Former Indian Cricketer, Virendra Sehwag has launched the cricket coaching website ‘Cricuru’. This will offer a personalized learning experience to the young players.

Professor Mukesh Sharma of IIT Kanpur has recently been appointed as an honorary member of the World Health Organization’s Global Air Pollution and Health-Technical Advisory Group (GAPH-TAG). He will be part of the WHO Advisory Group on Interventions/Policies for Air Pollution Control in 194 Member States.

Ziona Chana, the head of the world’s largest family of Mizoram state of India, has recently passed away at the age of 76. He is a carpenter by profession and has 38 wives and 89 children. He was born on 21 July 1945, he was the head of a community named Paval.

World Blood Donor Day is celebrated all over the world on 14 June. The purpose of celebrating this day is to raise awareness about the need for safe blood products.

Defense Minister Shri Rajnath Singh has recently approved budgetary support of Rs.498.8 crore for innovation in the defense sector through i-DEX-DIO. This budgetary support will give a boost to the “Self-reliant India campaign”.

Barbora Krejcikova of the Czech Republic recently won the women’s singles title in French Open tennis by defeating Anastasia Pavlyuchenkova 6-1, 2-6, 6-4. She was her first Grand Slam finalist. She has previously won the doubles title 5 times in the Krejcikova Grand Slam tournament.

Leaders at the G-7 summit recently launched Build Back Better World (B3W) to counter China’s Belt and Road Initiative and help developing countries. During this conference, US President Biden and G7 partners have agreed to a new global infrastructure B3W.