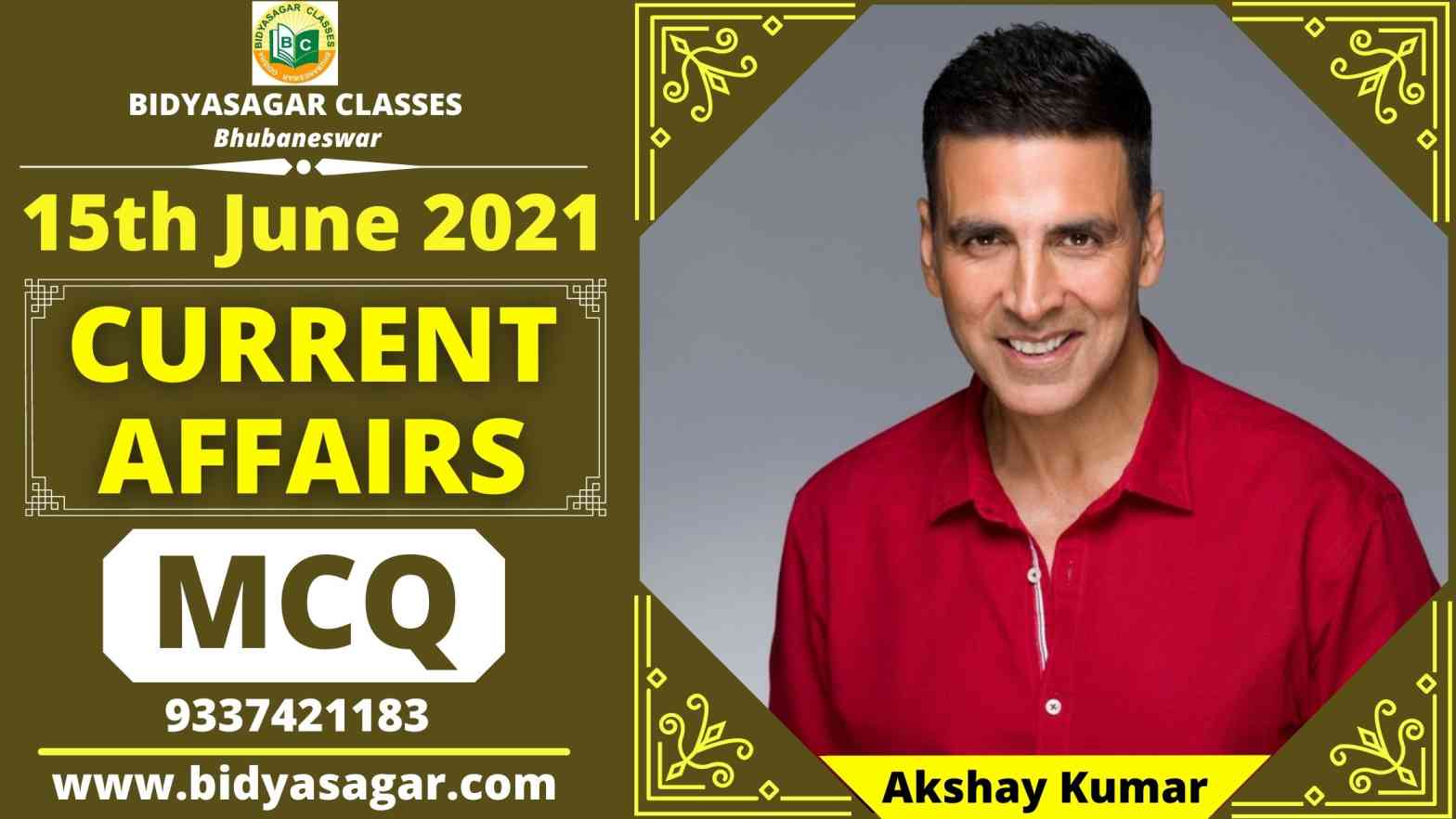 In this article, we will discuss MCQ on important current affairs of 15th June 2021 and their answers with explanations.

1. The mobile app “Namaste Yoga”, devoted to Yoga, has been launched by which Ministry?

A) Ministry of AYUSH

B) Ministry of Youth Affairs and Sports

D) Ministry of Information and Broadcasting

2. Who has been appointed as the new Secretary-General of the UNCTAD?

3. The Mission ‘EnVision’, to study the planet Venus, has been launched by which space agency?

5.Which of the following bank has recently announced the launch of ‘GharGhar Ration’ Program, an employee-funded program for its low-income customers whose livelihoods are affected by COVID-19?

A) A blast-resistant helmet

B) A blast-resistant Jacket

8. What was the rank of India in Coursera’s Global Skills report 2021?

10. Who among the following has won Pulitzer Prize 2021 in “International Reporting category” for reporting on China’s detention camps for Muslims?

D) All of the above

13.Which of the following will become the world’s first mask-free country in the Corona period?

14. Name the first village in India, where the entire population above 18 years has been vaccinated.

15. Name the bollywood actor, who has been appointed as the new brand ambassador of biotechnology company Mylab Discovery Solutions.

17. Who has been roped in as the Brand Ambassador of MyLab Discovery Solutions?

18. ___________ State Education Department has collaborated with Doordarshan for broadcasting to broadcasting online classes for students of Class 1 to 12.

A mobile application devoted to Yoga named as “Namaste Yoga”, has been laucnhed by Ministry of AYUSH. The Namaste Yoga” app has been designed as an information platform for the public, with the aim to raise awareness about yoga and make it accessible for the larger community.

The U.N. General Assembly has approved the appointment of Costa Rican economist Rebecca Grynspan, as the Secretary-General of the United Nations Conference on Trade and Development (UNCTAD). She will serve a four-year term of office. Grynspan is the first woman and Central American to head UNCTAD.

European Space Agency (ESA), is now developing its own probe to study Venus, for holistic view of planet from its inner core to upper atmosphere. The mission dubbed as EnVision, will probably be launched to the planet in the early 2030.

The International Albinism Awareness Day (IAAD) is celebrated annually on June 13 to celebrate the human rights of persons with albinism worldwide.

IDFC FIRST Bank has announced the launch of ‘GharGhar Ration’ Program, an employee-funded program for its low-income customers whose livelihoods are affected by COVID-19.

A professor from IIT Roorkee, Prof. Shailesh Ganpule, has received the ‘NSG Counter-IED & Counter-Terrorism Innovator Award 2021′ for his design of a blast-resistant helmet.

India’s forex reserves crossed $600 mark for the first time and as on June 4, it stood at $605 billion. With this, India equals Russia as the fourth largest reserve holder worldwide.

As per the ‘Global Skills Report 2021’ released by Coursera, India has been ranked 67th overall globally.

Nobel laureate Amartya Sen has penned his memoir ‘Home in the World’. The book will be published in July by Penguin Random House.

World blood donor day is observed globally on June 14th every year. The aim is to raise global awareness of the need for safe blood and blood products for transfusion and of the critical contribution voluntary, unpaid blood donors make to national health systems.

Novak Djokovic defeated Stefanos Tsitsipas to lift the French Open title for the second time in his career.

Israel will become the world’s first mask-free country in the Corona period. Here the rule of applying masks in closed places will end from June 15.

Weyan, a village in district Bandipora (J&K) has become the first village in the country, where the entire population above 18 years has been vaccinated.

Week-long Indian Mango promotion programme has begun in Bahrain.  The programme displayed 16 varieties of mango including 3 Geographical Indications (GI) certified Lakshmanbhog and Khirsapati of West Bengal and Zardalu of Bihar.

Akshay Kumar has been roped in as the Brand Ambassador of biotechnology firm MyLab Discovery Solutions. The company has recently launched India’s 1st COVID-19 self test kit ‘CoviSelf’.

Jharkhand State Education Department has collaborated with Doordarshan for broadcasting to broadcasting online classes for students of Class 1 to 12. The classes have commenced from 14th June, 2021 and will conclude after 3 months.

Andhra Pradesh government will establish state museum in Vishakhapatnam. Three more museums have been proposed in Tirupati, Srikakulam and Ongole.

United Nations General Assembly (UNGA) has approved declaration for ending Acquired Immuno-Deficiency Syndrome (AIDS) by the end of 2030. UNGA aims to reduce annual new HIV infections under 3,70,000 and annual AIDS related deaths to under 2,50,000 by 2025.