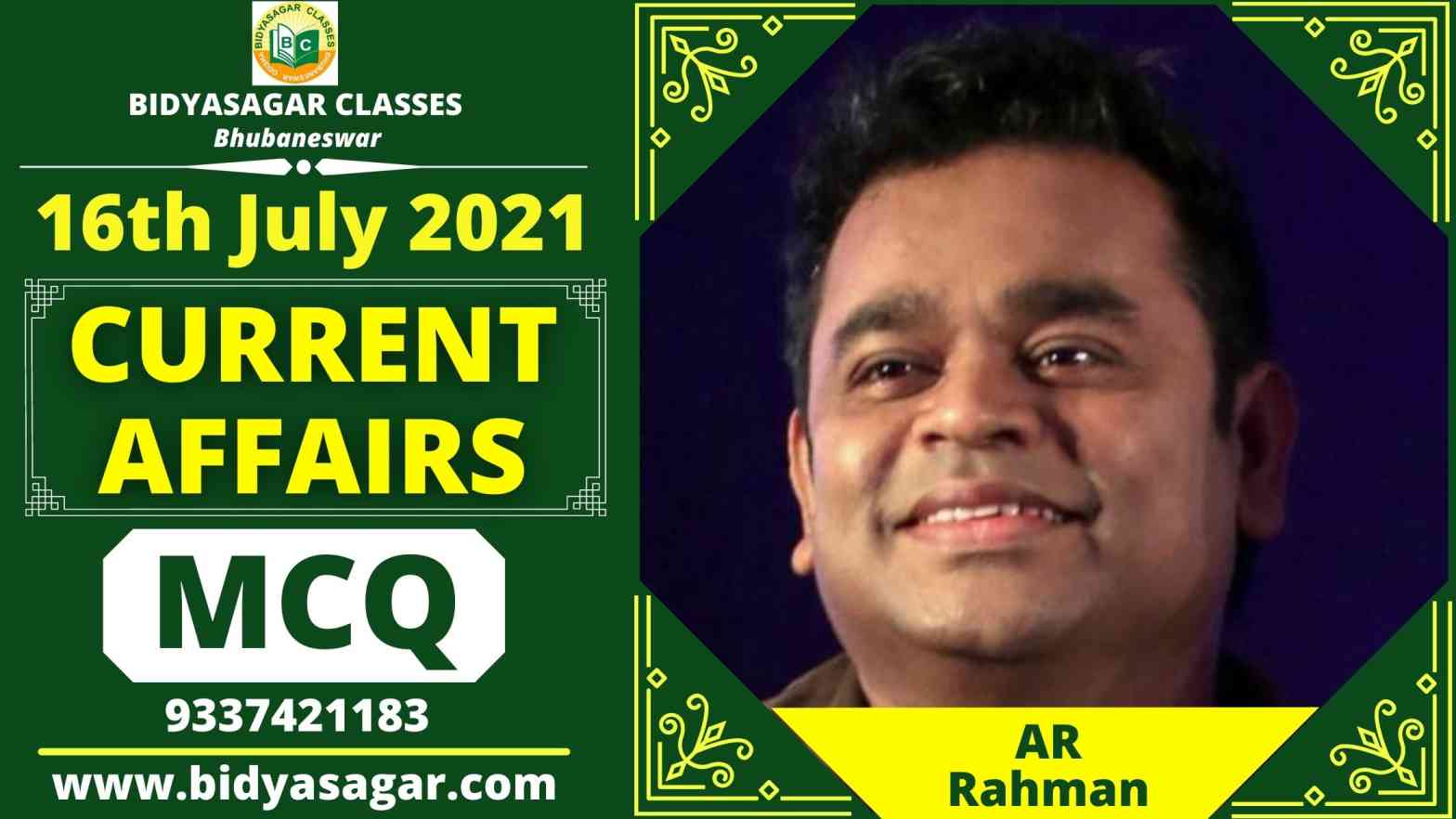 In this article, we will discuss MCQ on important current affairs of 16th July 2021 and their answers with explanations.

(E) July 15
4. Who has been appointed as the Leader of the House in Rajya Sabha?
(A) Piyush Goyal
(B) Harsh Vardhan
(C) Ramesh Pokhriyal Nishank
(D) Santosh Gangwar
5. Cabinet approves an increase in Dearness Allowance and Dearness Relief from 17% to _____.
(A) 20%
(B) 22%
(C) 24%
(D) 28%
6. Name the singer of the Tokyo Olympics cheering song “Hindustani Way”.
(A) Neha Kakkar
(B) Sunidhi Chauhan
(C) Ananya Birla
(D) Alka Yagnik
7. Cabinet approves continuation of centrally sponsored scheme National AYUSH Mission for _______.
(A) 2 years
(B) 5 years
(C) 7 years
(D) 10 years
8. Name the author of the book ‘Urdu Poets and Writers – Gems of Deccan’.
(A) Abdul Rahman Munif
(B) Abid Azad
(C) Aamer Hussein
(D) J.S. Ifthekhar
9. The Reserve Bank of India has imposed restrictions on __________.
(A) Mastercard
(B) VISA
(C) Rupay
(D) AmazonPay
10. Name the engine, which was successfully tested by ISRO for Gaganyaan Program.
(A) Pragti Engine
(B) Vikas Engine
(C) Gagan Engine
(D) Prakash Engine
11. Which of the following bank licence was recently cancelled by RBI?
(A) Nutan Nagarik Sahakari Bank
(B) Mehsana Urban Co-Op Bank
(C) Dr Shivajirao Patil Nilangekar Urban Co-operative Bank
(D) Amanath Co-operative Bank
12. The country’s first ‘Grain ATM’ has been set up as a pilot project in ________.
(A) Haryana
(B) Gujarat
(C) Rajasthan
(D) Maharashtra
13. The annual UN-FAO report titled “The State of Food Security and Nutrition in the World 2021” states that between _______ million people in the world faced hunger in 2020.
(A) 724 and 815
(B) 723 and 814
(C) 722 and 813
(D) 720 and 811
14. What is the theme of the World Youth Skills Day 2021?
(A) Skills for a Resilient Youth
(B) Reimagining Youth Skills Post-Pandemic
(C) Skills for the Future of Work
(D) Learning to learn for life and work
15. The wholesale price-based inflation eased marginally to ________ per cent in June
(A) 10.07
(B) 11.07
(C) 12.07
(D) 13.07
16. Export Import (Exim) Bank of India extended a USD 35.26 million loan for a power transmission project being executed by Kalpataru Power Transmission in which country?
(A) Senegal
(B) Qatar
(C) Portugal
(D) Namibia
17. Which of the following bank has received Reserve Bank of India’s (RBI) nod to apply for amalgamation of its promoter into itself?
(A) ESAF Small Finance Bank
(B) Ujjivan Small Finance Bank
(C) Equitas Small Finance Bank
(D) Utkarsh Small Finance Bank
18. The Reserve Bank has barred which of the following from onboarding new credit, debit and prepaid card customers with effect from July 22 as it failed to comply with data storage norms?
(A) Mastercard
(B) Rupay
(C) Visa
(D) American Express
19. Who is the author of the book titled ‘Palleku Pattabhishekam’?
(A) Abdul Samad
(B) Acharya Prasanna
(C) Ram Chander Jangra
(D) Yalamanchili Sivaji
20. 3-yr old Chryseis Knight who is the author of the book titled ‘The Great Big Lion’ hails from which country?
(A) Norway
(B) Canada
(C) Chile
(D) Switzerland

1. (D)
A tripartite Memorandum of Understanding has been signed between the Administration of Union Territory of Ladakh and Ladakh Autonomous Hill Development Council Leh/Kargil with Sikkim State Organic Certification Agency (SSOCA) regarding the implementation of Prampragat Krishi Vikas Yojana and Mission Organic Development Initiative. The aim of MoU is to convert Ladakh into organic by 2025.
2. (C)
NTPC Ltd., India’s largest power generator is set to construct the country’s single-largest solar photovoltaic project at Rann of Kutch region in Khavada, Gujarat.
3. (E)
The World Youth Skills Day (WYSD) is observed every year on July 15 as a day to recognize the strategic importance of equipping young people with skills for employment, decent work and entrepreneurship, and to highlight the crucial role of skilled youth in addressing current and future global challenges.
4. (A)
Union Minister Piyush Goyal has been appointed as the Leader of the House in Rajya Sabha. His appointment is effective from July 06, 2021. He will succeed Thawar Chand Gahlot, who has taken charge as the Governor of Karnataka.
5. (D)
The Union Cabinet headed by Prime Minister Narendra Modi has approved an increase in the Dearness Allowance to Central Government employees and Dearness Relief to pensioners to 28 per cent.
6. (C)
Singer Ananya Birla has teamed up with music maestro AR Rahman to launch a cheer song for Indian sports personalities as they gear up for Tokyo Olympics. Titled “Hindustani Way”, the song has been sung by Ananya and composed by Rahman.
7. (B)
Cabinet approves continuation of centrally sponsored scheme National AYUSH Mission for 5 years from FY 2021-2026.
8. (D)
Vice President M. Venkaih Naidu has received a book entitled ‘Urdu Poets and Writers – Gems of Deccan’ authored by senior journalist, J.S. Ifthekhar.
9. (A)
The Reserve Bank of India has imposed restrictions on Mastercard Asia/Pacific Private Limited for adding new domestic customers from 22nd July 2021.
10. (B)
The Indian Space Research Organisation (ISRO) has successfully conducted the third long-duration hot test of the liquid propellant Vikas Engine for the core L110 liquid stage of the human-rated GSLV Mk III vehicle, as part of the engine qualification requirements for the Gaganyaan Programme.
11. (C)
The Reserve Bank of India (RBI) has cancelled the licence of Dr Shivajirao Patil Nilangekar Urban Co-operative Bank Ltd, Nilanga, Latur, as it does not have adequate capital and earning prospects.
12. (A)
The country’s first ‘Grain ATM’ has been set up as a pilot project in Gurugram, Haryana. It is an automatic machine, which works just like a bank ATM.
13. (D)
The annual UN-FAO report titled “The State of Food Security and Nutrition in the World 2021” states that between 720 and 811 million people in the world faced hunger in 2020, which is around 161 million more than in 2019.
14. (B)
The theme of World Youth Skills Day 2021 is “Reimagining Youth Skills Post-Pandemic”.
15. (C)
The wholesale price-based inflation eased marginally to 12.07 per cent in June as crude oil and food items witnessed some softening in prices. However, WPI inflation remained double-digit for the third consecutive month in June, mainly due to a low base of last year.
16. (A)
Export Import (Exim) Bank of India said it has extended a USD 35.26 million loan for a power transmission project being executed by Kalpataru Power Transmission in Senegal.
17. (C)
Equitas Holdings, the promoter of Equitas Small Finance Bank (SFB), said the bank has received Reserve Bank of India’s (RBI) nod to apply for amalgamation of the promoter into itself. As per the SFB licensing guidelines of RBI, a promoter of SFB can exit or to cease to be a promoter after the mandatory initial lock-in period of five years (initial promoter lock-in) depending on RBI’s regulatory and supervisory comfort and SEBI regulations at that time.
18. (A)
The Reserve Bank barred Mastercard Asia Pacific from onboarding new credit, debit and prepaid card customers with effect from July 22 as it failed to comply with data storage norms.
19. (D)
Vice President M Venkaiah Naidu released the book titled ‘Palleku Pattabhishekam’ on rural India and agriculture written by former MP Shri Yalamanchili Sivaji.
20. (B)
The book titled ‘The Great Big Lion’ drawn and written by child prodigy Chryseis Knight, is a story about a lion and two children. It talks about friendship, inclusivity, wildlife conservation and the world of imagination.