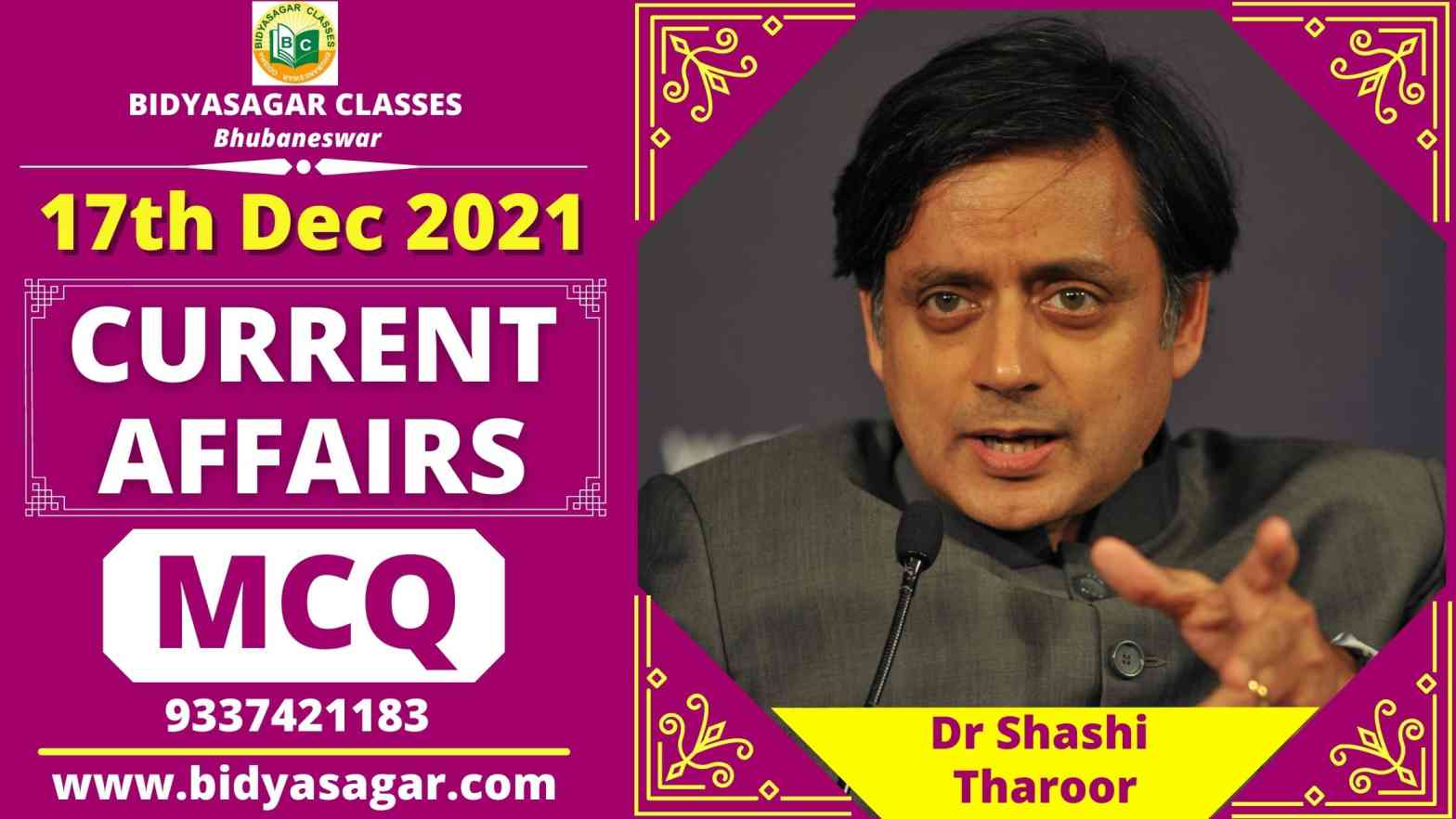 In this article, we will discuss MCQ on important current affairs of 17th December 2021 and their answers with explanations.

1. A
Union Home Minister Amit Shah laid the foundation stone of Umiya Mata Dham temple and temple premises under Maa Umiya Dham Development Project at Umiya Campus in Sola in Ahmedabad, Gujarat along with several developmental projects including a railway bridge.
2. D
Odisha inked agreement with UNCDF to launch “Mission Shakti Living Lab” for financial empowerment of women.
3. C
According to the gazette of India issued by the Ministry of Environment, Forest and Climate Change (MoEF&CC), an area of 454.65 square kilometres around the boundary of Askot Wildlife Sanctuary in the Pithoragarh district of Uttarakhand has been declared as the Askot Wildlife Sanctuary Eco-sensitive Zone (ESZ).
4. B
ADB projected growth forecast for 2021-2022 for India at 9.7% and developing Asia’s at 7%.
5. D
Axis Bank is working with new digital services from provider Swift to provide a comprehensive digital solution to clients.
6. B
CEO of Central Board of Film Certification (CBFC), Ravinder Bhakar has assumed charge of National Film Development Corporation (NFDC), Films Division, and Children Films Society of India (CFSI).
7. A
IIT-Delhi signed an MoU with Indian Air Force (IAF) to support requirements towards indigenous solutions in various weapon systems.
8. C
Former union minister and Lok Sabha Member of Parliament Dr Shashi Tharoor‘s 23rd book titled ‘Pride, Prejudice and Punditry’ was launched in Hyderabad, Telangana.
9. D
Producers’ inflation based on the Wholesale Price Index (WPI) reached an all-time high in the current series at 14.2 per cent in November. This is the eighth successive month of double digits WPI (mainly due to hardening of prices of mineral oils, basic metals, crude petroleum and natural gas). Wholesale Price-based Index (WPI) inflation base year is 2011-12.
10. C
A total of 148 athletes, including 20 new inductees, in seven Olympic disciplines and six Paralympic disciplines, have been identified for support under the Target Olympic Podium Scheme at a meeting of the Mission Olympic Cell of the Ministry of Youth Affairs and Sports.
11. D
Union Minister of State (Independent Charge) Science & Technology, Dr Jitendra Singh inaugurated the seventh edition of India International Science Festival at Panaji, Goa.
12. D
Group Captain Varun Singh, who was rescued after the helicopter crash that killed Chief of Defence Staff General Bipin Rawat and 12 others, has passed away.
13. A
With the inclusion of Durga Puja, the number of elements in the list of Intangible Cultural Heritage from India has increased to 14.
14. B
French fashion house Chanel named Leena Nair, an executive from Unilever, as its new global CEO. Nair’s career at Unilever spanned 30 years, most recently as the chief of human resources and a member of the executive committee.
15. B
Time magazine recently honored America’s famous gymnast Simone Biles with the Best Athlete Award 2021. Simone Biles has won seven Olympic medals and 25 World Championships medals.
16. B
Union Home Minister Amit Shah has recently laid the foundation stone of Maa Umiya Dham development project at Umiya complex at Sola in Ahmedabad, Gujarat. Under which Umiya Mata Dham temple and temple complex will be built at a cost of Rs 1500 crore on 74 thousand square yards of land.
17. C
Federation of Sports Journalists of India has recently announced to honor legendary cricketer Sunil Gavaskar with the prestigious ‘SJFI Medal’. Sunil Gavaskar is an ex-player of Indian cricket. Sunil Gavaskar is counted among the great batsmen of cricket in the present era.
18. A
Chief of Army Staff General MM Naravane has recently taken over as the chairman of the “Chief of Staff Committee”. The post had fallen vacant after the death of CDS General Bipin Rawat. Whereas before the formation of the post of CDS, usually the senior most of the chiefs of the three services were given the charge of chairman of the ‘Chief of Staff Committee’.