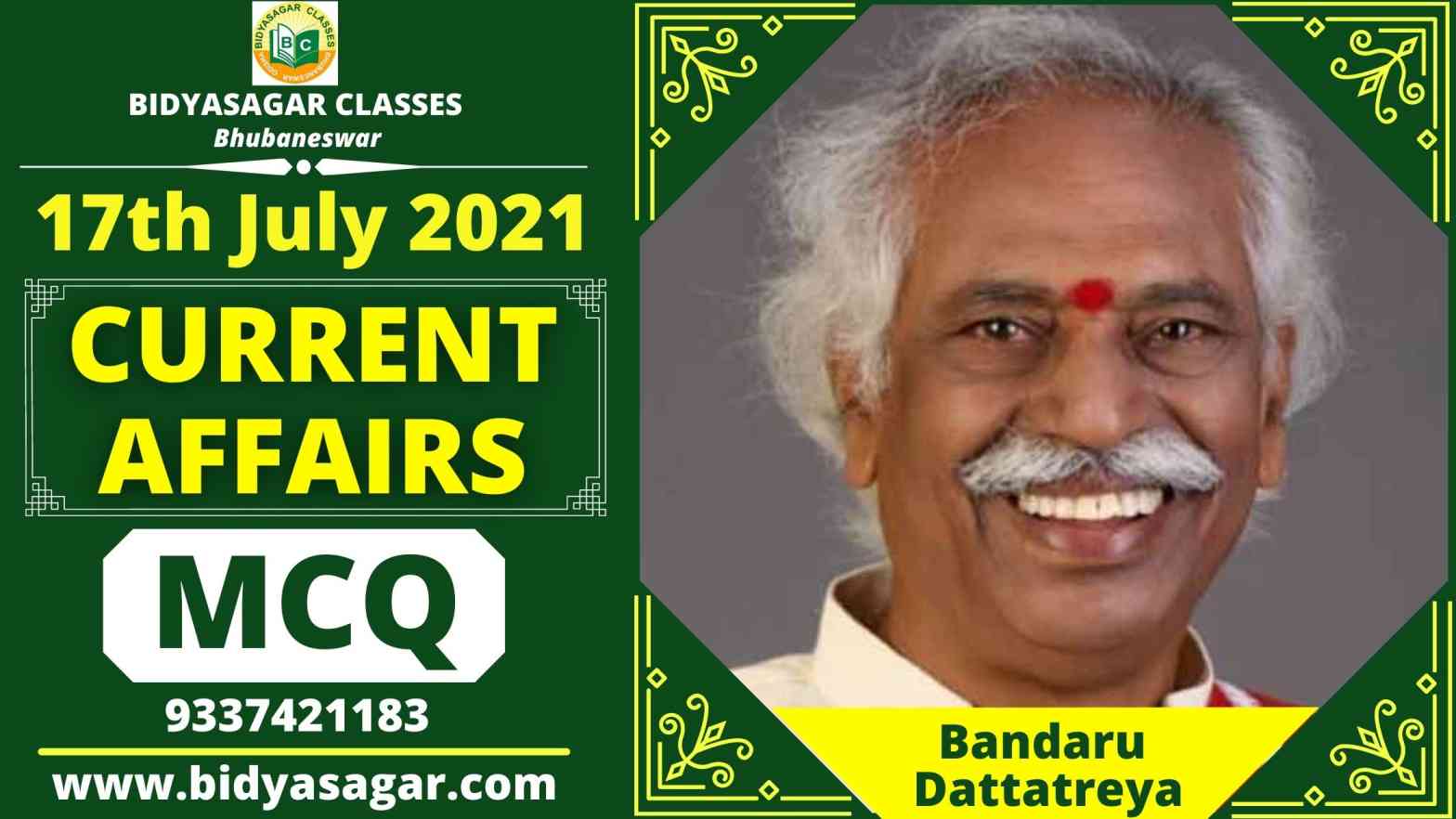 In this article, we will discuss MCQ on important current affairs of 17th July 2021 and their answers with explanations.

1. D
Singapore unveiled one of the world’s largest floating solar panel farms, which can produce enough electricity to power the island’s five water treatment plants. The project is part of efforts by the country to meet a goal of quadrupling its solar energy production by 2025 to help tackle climate change.
2. A
China has officially begun the construction of the world’s first commercial modular small reactor ‘Linglong One’ at the Changjiang Nuclear Power Plant in the country’s Hainan Province.
3. B
Pakistan captain Babar Azam with the century he scored against England became the fastest batsman to notch up 14 ODI centuries in terms of innings, surpassing the likes of Hashim Amla (84), Indian captain Virat Kohli (103), and Australian batsman David Warner (98). He reached his 14th ton in his 81st ODI innings.
4. C
The United Arab Emirates has became the first Gulf nation to open an embassy in Israel, nearly a year after both countries signed an agreement to normalise diplomatic ties. The new mission is located in Tel Aviv Stock Exchange building.
5. D
Karnataka Chief Minister, BS Yediyurappa has unveiled the Karnataka Electric Bike Taxi scheme-2021. This will serve as a bridge between public transport and daily commuters.
6. B
The Indian Academy of Highway Engineers (IAHE) under the Ministry of Road Transport and Highways has inked an agreement with the University of New South Wales, Australia for setting up a Centre for Advanced Transportation Technology and Systems (CATTS) in Noida, Uttar Pradesh.
7. A
Prime Minister Narendra Modi has inaugurated the International Cooperation and Convention Centre “Rudraksh”, in Varanasi, Uttar Pradesh.
8. C
The Manduadih railway station has been finally renamed as Banaras by the Northeastern railways (NER). The NER replaced the old signboard with the new one which read ‘Banaras’ after the Railway Board gave its nod for the new name.
9. D
The All India Football Federation (AIFF) has nominated Gokulam Kerala FC to represent India in the AFC Club Championship 2020-21.
10. D
Prime Minister Narendra Modi has addressed the nation on July 15, 2021, on the occasion of World Youth Skills Day 2021 and the 6th anniversary of the Skill India Mission.
11. A
‘Mathrukavacham’ COVID vaccination campaign has been launched in Kerala. The aim of the campaign is to vaccinate the pregnant women across the state.
12. B
Bandaru Dattatreya has become the 18th Governor of Haryana. Bandaru has also served as the Minister of State for labour and employment in 2014. He was previously serving as the Governor of Himachal Pradesh.
13. D
Union Minister of Labour & Employment, Bhupender Yadav chaired the ‘7th BRICS Labour & Employment Ministers’ meeting. This was the 1st meeting to be chaired by Bhupender Yadav after assuming the charge of Labour and Employment minister.
14. C
RBI has cancelled the banking license of Dr. Shivajirao Patil Nilangekar Urban Co-operative Bank. The bank does have a stable financial prospect and is currently incapable of paying-off its depositors.
15. A
India’s 1st pod taxi will operate between Jewar Airport and Noida Film City. The proposed 14 km-long pod taxi project will be carried out by the Indian Port Rail and Ropeway Corporation Limited (IPRCL).
16. C
As per the recent reports released by the United Nations Children Fund (UNICEF), India has the highest number of unvaccinated and under vaccinated kids in the world. The number increased from 1.4 million to 3.5 million in 2020 globally.
17. A
Annual Asha Bonalu Festival is currently being celebrated across Telangana. The festival commenced on 11th July, 2021 and will continue till 8th August, 2021. It is one of the biggest traditional folk festivals and it got declared as the state festival in 2014.
18. D
RBI has extended the implementation timeline of swapping ATM cassettes till March, 2022. As per the directives of RBI, banks will use the lockable cassettes for cash replenishment in the Automated Teller Machines (ATMs) after March, 2022.
19. A
World Youth Skills Day is annually observed on 15th July across the globe to emphasize on the importance of empowering the youths with employment-oriented skills. The theme for World Youth Skills Day 2021 was ‘Reimagining Youth Skills Post-Pandemic’.
20. D
Government of Jammu Kashmir has launched Horticulture Week for doubling farmers’ income. Around 25 lakh high density plants will be planted during the Horticulture Week.