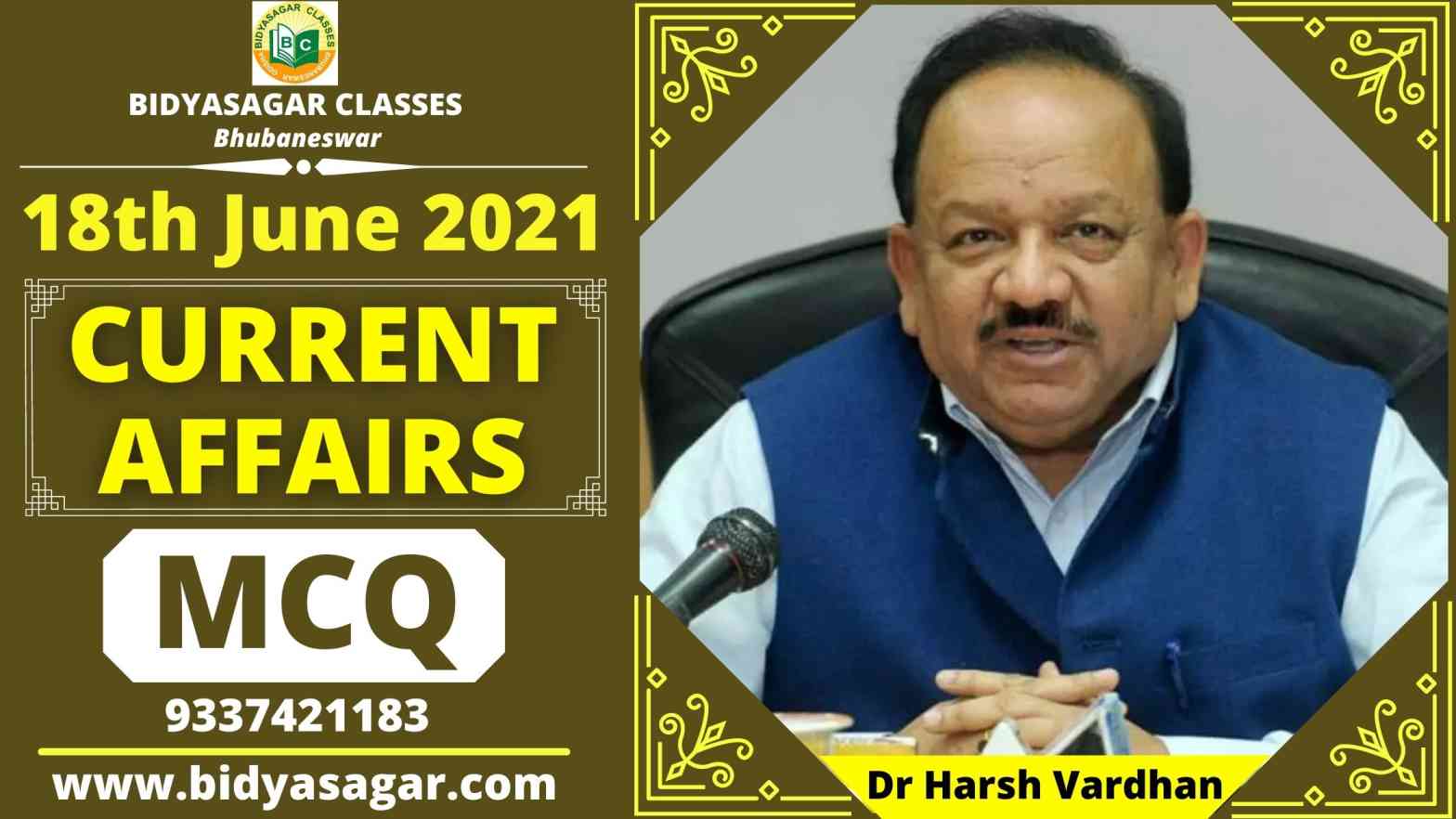 In this article, we will discuss MCQ on important current affairs of 18th June 2021 and their answers with explanations.

1. With which organization, India has signed a $484 million loan to upgrade road network in Chennai–Kanyakumari Industrial Corridor (CKIC) in Tamil Nadu?

2. Which company has recently got approval from regulator IRDAI to undertake insurance broking?

4. What is the theme of Conference of BRICS Network Universities 2021?

A) Partnership for Global Stability, Security and Prosperity

5. The Union Cabinet chaired by Prime Minister Narendra Modi has approved the implementation of “Deep Ocean Mission”. Who among the following is the present Union Minister of Earth Sciences?

6. Which of the following country expanding nuclear arsenal, according to SIPRI Yearbook 2021?

D) All of the above

7. Which of the following state has launched the accelerator programme called “Revv Up”?

8. Which of the following bank has announced the launch of ‘ICICI STACK for Corporates’, a comprehensive set of digital banking solutions for corporates

9. Defence Minister Rajnath Singh has approved the budgetary support of _______ for iDEX-DIO for the next five years.

10. Who among the following has been appointed as the new chairman of Microsoft?

A) Project O2 for India

13. Rajnath Singh has approved a policy on archiving, declassification, compilation and publication of war and operations histories. According to the policy, records should ordinarily be declassified in ________.

14. What is the theme of World Day to Combat Desertification and Drought 2021?

A) Let’s grow the future together!

B) Land has true value. Invest in it

C) Food. Feed. Fibre. the links between consumption and land

15. Which software company recently appointed the Satya Nadella as its chairman?

16. The central government has recently decided to form how many Companies instead of “Ordnance Manufacturing Board”?

17. The World Health Organization has recently identified a new variant lambda of COVID-19 in how many Countries?

18. Which state of India has recently reported the first case of green fungus?

19. Which day is celebrated around the world on 18th June?

20. The Government of India and which Regional Development Bank have signed a $484 million loan to upgrade the road network in the Tamil Nadu Industrial Corridor?

The Asian Development Bank (ADB) and the Government of India here today signed a $484 million loan to improve transport connectivity and facilitate industrial development in the Chennai–Kanyakumari Industrial Corridor (CKIC) in the state of Tamil Nadu.

Policybazaar has got approval from regulator IRDAI to undertake insurance broking, a development that will help the company augment business and expand bouquet of services.

Prime Minister,  Narendra Modi virtually addressed the 5th edition of VivaTech. VivaTech is one of the largest digital and startup events of Europe, held in Paris every year since 2016.

The theme of the Conference of BRICS Network Universities is “Electric Mobility”.

Stockholm International Peace Research Institute(SIPRI) has released the SIPRI Yearbook 2021. The report assesses the current state of armaments, disarmament and international security. China is in the middle of significant modernisation and expansion of its nuclear weapon inventory, and India and Pakistan also appear to be expanding their nuclear arsenals.

Telangana government has launched the Telangana AI Mission (T-AIM) powered by Nasscom and as part of the T-AIM, an accelerator programme called “Revv Up” has been launched to enable and empower AI startups.

ICICI Bank has announced the launch of ‘ICICI STACK for Corporates’, a comprehensive set of digital banking solutions for corporates and their entire ecosystem including promoters, group companies, employees, dealers, vendors and all other stakeholders.

Defence Minister Rajnath Singh has approved the budgetary support of Rs 498.8 crore for iDEX-DIO (Innovations for Defence Excellence – Defence Innovation Organisation) for the next five years.

‘Project O2 for India’, an initiative of the Office of Principal Scientific Adviser, Government of India (GoI), aims to help stakeholders working to augment the country’s ability to meet the rise in demand for medical oxygen.

Defence Minister Rajnath Singh has approved a policy on archiving, declassification, compilation and publication of war and operations histories by the Ministry of Defence (MoD). According to the policy, records should ordinarily be declassified in 25 years.

“Restoration. Land. Recovery. We build back better with healthy land” is the theme for 2021 World Day to Combat Desertification and Drought.

The world’s largest software company Microsoft has recently appointed Satya Nadella as its chairman. He is the CEO of the company for the last 7 years.

The World Health Organization has recently announced that they have recently identified a new variant lambda of COVID-19 in 29 Countries. Particularly in South America, where it is believed to have originated. This lambda variant, first identified in Peru, was classified as a “Global Variant of Interest”.

The Government of India and the Asian Development Bank have recently signed a $484 million loan to upgrade the road network in the Tamil Nadu Industrial Corridor. CKIC is part of India’s East Coast Economic Corridor which stretches from West Bengal to Tamil Nadu.