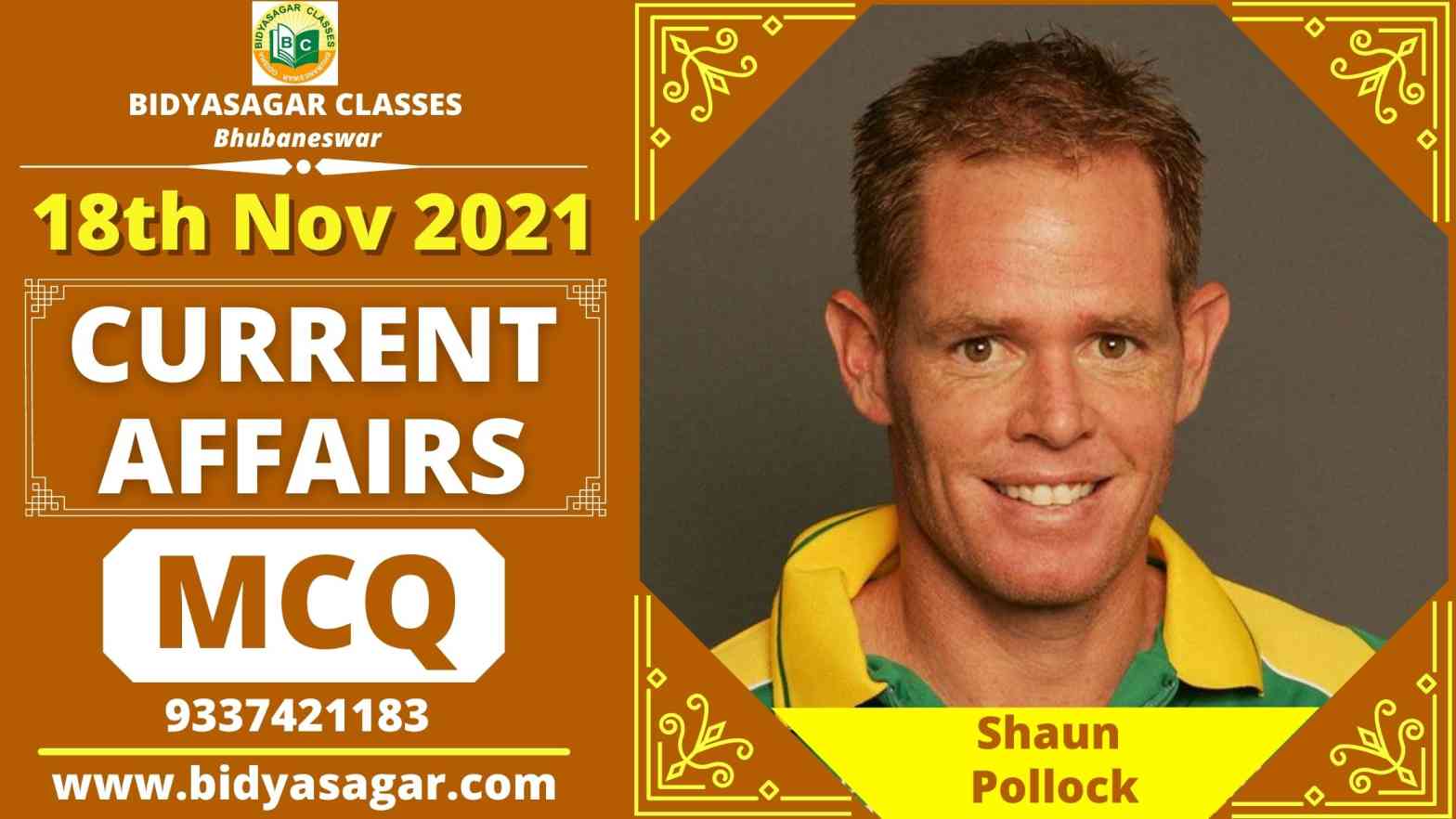 In this article, we will discuss MCQ on important current affairs of 18th November 2021 and their answers with explanations.

1. As per UBS Securities, what is the projected GDP growth rate projection of India in 2021-22?
A) 9.5%
B) 8.5%
C) 10.5%
D) 11.5%
2. India’s first Grass Conservatory “Germplasm Conservation Centre” has been inaugurated in which state?
A) Uttar Pradesh
B) Himachal Pradesh
C) Uttarakhand
D) Haryana
3. The Ministry of Defence has organised the Rashtra Raksha Samparpan Parv in which city?
A) Surat
B) Varanasi
C) Bhopal
D) Jhansi
4. Who has been appointed as the new Chairman of the ICC Men’s Cricket Committee?
A) VVS Laxman
B) Sourav Ganguly
C) Virender Sehwag
D) Sachin Tendulkar
5. When is the World Philosophy Day observed globally?
A) Third Tuesday of November
B) Third Wednesday of November
C) Third Thursday of November
D) Third Friday of November
6. India’s first dedicated fisheries business incubator has been inaugurated in which place?
A) Gurugram
B) Dehradun
C) Kochi
D) Pune
7. The WePOWER India Partnership Forum was organised by which organisations in virtual format?
A) AIIB and ADB
B) World Bank and ADB
C) World Bank and UNDP
D) ADB and UNDP
8. Janette Brittin has been inducted in ICC Hall of Fame in 2021 along with Shaun Pollock of South Africa and Mahela Jayawardene of Sri Lanka. Brittin played for which country?
A) Zimbabwe
B) South Africa
C) New Zealand
D) England
9. Which city is hosting the 82nd All India Presiding Officers Conference (AIPOC) in 2021?
A) New Delhi
B) Lucknow
C) Shimla
D) Gurugram
10. How many athletes and coaches have been conferred with the first ever SAI Institutional Awards?
A) 124
B) 246
C) 211
D) 86
11. Who is the author of the book “The Disruptor: How Vishwanath Pratap Singh Shook India”?
A) Debashish Mukerji
B) Adeel Hussain
C) Mukesh Batra
D) Jaideep Hardikar
12. In India, the National Naturopathy Day is observed every year on______________
A) 15 Nov
B) 16 Nov
C) 17 Nov
D) 18 Nov
13. How long has the Security Council recently extended the UN Interim Security Force mandate for Abei?
A) December 5, 2021
B) December 10, 2021
C) December 15, 2021
D) December 25, 2021
14. Who has been appointed as the chairman of the ICC Men’s Cricket Committee at the International Cricket Council’s board meeting in Dubai?
A) Rahul Dravid
B) Anil Kumble
C) Sourav Ganguly
D) Virender Sehwag
15. Pochampally village of which of the following state has been adjudged the best tourism village in the world?
A) Kerala
B) Gujarat
C) Jharkhand
D) Telangana
16. The Institute of Defense Studies and Analysis, located in the capital of India, has been announced to be named after whom?
A) Narendra Modi
B) Arun Jethali
C) Smriti Irani
D) Manohar Parrikar

1. A
UBS Securities has made GDP growth rate projections for India for 2021-22 (FY22) at 9.5%
2. C
India’s first ‘Grass Conservatory’ has been inaugurated in Ranikhet of Almora district in Uttarakhand on November 14, 2021.
3. D
Defence Minister Rajnath Singh inaugurated the Rashtra Raksha Samparpan Parv in Jhansi, Uttar Pradesh on November 17, 2021.
4. B
The President of BCCI, Sourav Ganguly, has been appointed as the Chairman of the ICC Men’s Cricket Committee, during the ICC Board Meeting held on 16 November 2021.
5. C
World Philosophy Day is celebrated on Third Thursday of November each year. In 2021, the day falls on 18 November.It was first celebrated in 2002 by the United Nations.
6. A
The first-of-its kind, dedicated fisheries business incubator has been inaugurated in Gurugram of Haryana to nurture fisheries start-ups under real market-led conditions. The incubator is known as LINAC- NCDC Fisheries Business Incubation Centre (LlFlC).
7. B
The WePOWER India Partnership Forum was held on November 9, 2021 in a virtual format.The event was organised by the World Bank and Asian Development Bank (ADB) in partnership with the India Smart Grid Forum (ISGF).The objective of the forum was to scale up the South Asia Women in Power Sector Professional Network (WePOWER) in India.
8. D
Janette Brittin of England, Shaun Pollock of South Africa and Mahela Jayawardene of Sri Lanka have been inducted into the ICC Hall of Fame in 2021.
9. C
Prime Minister Shri Narendra Modi inaugurated two-days 82nd All India Presiding Officers Conference (AIPOC) on November 17, 2021 in Shimla, Himachal Pradesh through video conferencing.AIPOC is the supreme body of legislatures in India.The year 2021 marks the centennial year of the AIPOC (100th anniversary).
10. B
Union Minister of Youth Affairs & Sports Shri Anurag Thakur presented the first ever SAI Institutional Awards to 246 athletes and coaches on November 17, 2021 in New Delhi.From the total 246 awardees, 162 athletes and 84 coaches were honoured in the Outstanding Award and Best Award category.
11. A
The book titled “The Disruptor: How Vishwanath Pratap Singh Shook India” has been authored by Debashish Mukerji.
12. D
The National Naturopathy Day is observed in India on 18 November every year, to promote positive mental and physical health through drugless system of medicine, called as Naturopathy.
13. C
The Security Council has recently extended the United Nations Interim Security Force mandate for ABEI till December 15, 2021. The United Nations Security Council has recognized that the current situation continues to be a threat to international peace and security.
14. C
In the board meeting of the International Cricket Council in Dubai, BCCI President Sourav Ganguly has been appointed as the chairman of the ICC Men’s Cricket Committee. While Ganguly was included in this committee as the first observer. But now they have been promoted.
15. D
Pochampally village, located about 50 km from Hyderabad, the capital of Telangana, has been voted the best tourism village in the world by the United Nations World Tourism Organization. Pochampally in Nalgonda district is often referred to as the silk city of India for its exquisite sarees.
16. D
The Institute of Defense Studies and Analysis, located in the capital Delhi, has been announced to be named after former Defense Minister Manohar Parrikar. Manohar Parrikar was the Defense Minister of the country from November 2014 to March 2017.