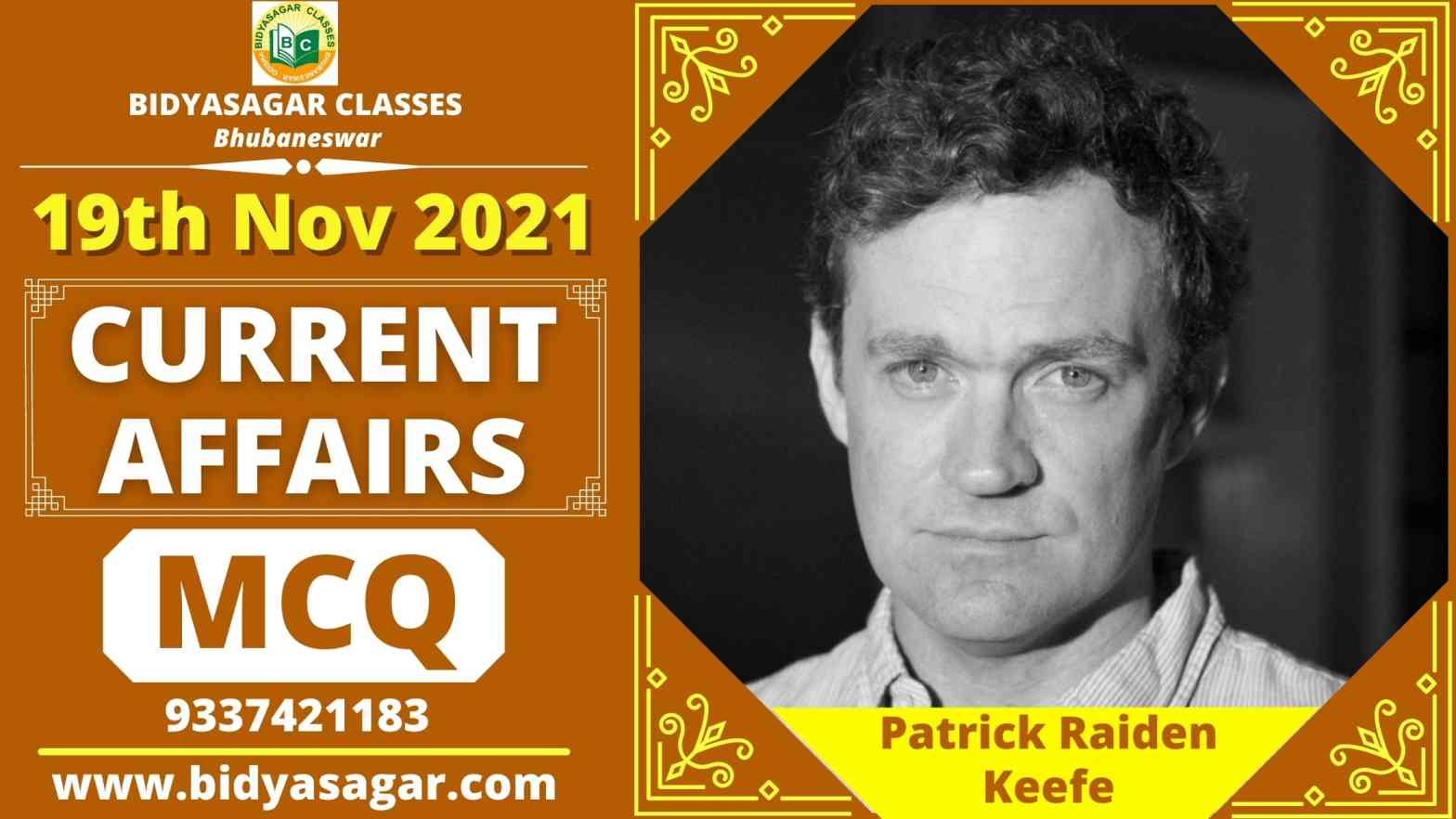 In this article, we will discuss MCQ on important current affairs of 19th November 2021 and their answers with explanations.

1. India has been re-elected to the Executive Board of UNESCO for 2021-25. How many members are there on the Board?
A) 164
B) 58
C) 192
D) 76
2. India’s first Food Museum has recently been inaugurated at which place?
A) Thanjavur
B) Pune
C) Kochi
D) Visakhapatnam
3. Name the incumbent Director of Enforcement Directorate (ED) whose tenure has been extended by the Finance Ministry for one year till November 2022?
A) Anup Kumar Dubey
B) Rahul Navin
C) Sanjay Kumar Mishra
D) Vivek R. Wadekar
4. World Toilet Day (WTD) is marked every year on which day?
A) 17 November
B) 19 November
C) 18 November
D) 16 November
5. President Ramnath Kovind recently inaugurated the Model Village (Adarsh Gram) Sui. In which place is the Sui village located?
A) Gurugram
B) Chandigarh
C) Bhopal
D) Bhiwani
6. Which player has won the 2021 WTA Finals Tennis title?
A) Garbine Muguruza
B) Simona Halep
C) Victoria Azarenka
D) Karolína Pliskova
7. Who delivered keynote address from India at the 2021 The Sydney Dialogue?
A) Nirmala Sitharaman
B) Narendra Modi
C) Ramnath Kovind
D) Venkaiah Naidu
8. The first Air Pollution Control Tower (APCT) of Uttar Pradesh has been launched in which city recently?
A) Ghaziabad
B) Agra
C) Lucknow
D) Noida
9. India marks the celebration of National Newborn Week from ____________
A) November 07 to 13
B) November 01 to 07
C) November 15 to 21
D) November 14 to 20
10. Novy Kapadia who has passed away recently was a well known sports commentator of which sports?
A) Football
B) Tennis
C) Wrestling
D) Cricket
11. Which financial body has approved USD 150 million loan for Sustainable Urban services program for Chennai Metropolitan Area (CMA)?
A) Asian Development Bank
B) International Monetary Fund
C) World Bank
D) Asian Infrastructure Investment Bank
12. What is the theme of 2021 World Toilet Day?
A) Valuing toilets
B) Sustainable sanitation and climate change
C) When nature calls
D) Wastewater
13. Which of the following ministry has organized a national workshop on Digital India Land Records Modernization Programme?
A) Ministry of Tribals
B) Ministry of Information and Broadcasting
C) Ministry of Sports
D) Ministry of Rural Development
14. Which award has been announced posthumously for late actor Puneet Rajkumar?
A) Delhi Gems
B) Maharashtra Ratna
C) Kerala Gems
D) Karnataka Gems
15. In which city the first air pollution control tower of Uttar Pradesh has been inaugurated?
A) Lucknow
B) Kanpur
C) noida
D) Ghaziabad
16. What is the rank of India with 44 points in the Global Bribery Risk Index in 2021?
A) 62nd
B) 72nd
C) 82nd
D) 92nd
17. Indian Railways has recently started the first pod hotel at which central station?
A) Kolkata Railway Station
B) Delhi Railway Station
C) Mumbai Central Station
D) Chennai Railway Station
18. Which of the following American author has won the £50,000 Bailey Gifford Prize for non-fiction for the book?
A) Patrick Raiden Keefe
B) Jean Mcafe
C) Arthur M. Sackler
D) Dockler Price

1. B
India has been re-elected to the Executive Board of UNESCO for the term 2021-25 on November 17, 2021. India received 164 votes to get re-elected to four-year term of office.UNESCO Executive Board consists of 58 member-states each with a four-year term of office.
2. A
The Union Minister for Commerce, Industry, Food and Public Distribution, Shri Piyush Goyal inaugurated India’s first Food Museum at Thanjavur in Tamil Nadu on November 15, 2021 through virtual platform.
3. C
The Ministry of Finance has extended the tenure of Sanjay Kumar Mishra, the Director of Enforcement Directorate (ED), for one year until November 18, 2022.
4. B
World Toilet Day (WTD) is observed every year on 19 November to inspire action to tackle the global sanitation crisis.
5. D
The President of India, Shri Ram Nath Kovind visited Sui village in Bhiwani district of Haryana on November 17, 2021 to inaugurate various public facilities in the village. This village is being developed as Adarsh Gram (Model village) by Mahadevi Parameshwaridas Jindal Charitable Trust under Swa-Prerit Adarsh Gram Yojana (SPAGY) scheme of Haryana Government.
6. A
In tennis, Garbine Muguruza of Spain beat Anett Kontaveit of Estonia, 6-3, 7-5 in the final to claim her first WTA Final title on November 17, 2021.
7. B
Prime Minister Narendra Modi delivered keynote address at The Sydney Dialogue on November 18, 2021 via video conferencing. PM addressed the event on the theme ‘India’s technology evolution and revolution’.The Sydney Dialogue has been organised from November 17-19, 2021 by the Australian Strategic Policy Institute.
8. D
The Union Minister of Heavy Industries Mahendra Nath Pandey inaugurated the first air pollution control tower of the state of Uttar Pradesh in Noida on November 17, 2021. The Air Pollution Control Tower (APCT) prototype has been developed by state-run Bharat Heavy Electricals Ltd (Bhel).
9. C
In India, the National Newborn Week is observed every year from 15 to 21 November. The theme of National Newborn Week 2021 is ‘Safety, quality and nurturing care – birth right of every newborn’.
10. A
Veteran author, football journalist and sports commentator Novy Kapadia has passed away due to health complications. He was 68. Kapadia was often called as ‘the voice of Indian football’.
11. D
The Asian Infrastructure Investment Bank (AIIB) has approved USD 150 million loan for the Government of India for the implementation of the Sustainable Urban services program for Chennai Metropolitan Area (CMA).
12. A
2021 theme– “valuing toilets”.
13. D
Ministry of Rural Development has recently organized a National Workshop on Digital India Land Records Modernization Program with an aim to boost the National Land Records Modernization Programme. Rural Development and Panchayati Raj Minister Giriraj Singh has inaugurated this workshop.
14. D
Late actor Puneet Rajkumar has been announced to be honored with the Karnataka Ratna award posthumously recently. He has become the 10th person to be honored with this award, whereas only 9 people have received this honor. The last time in the year 2009, Dr. Virendra Hegde was given this award for social service.
15. C
Bharat Heavy Electricals Limited (BHEL) in Noida, Uttar Pradesh has inaugurated the first Air Pollution Control Tower of Uttar Pradesh in Noida to tackle the problem of increasing air pollution in urban areas. Is. The prototype of this tower has been indigenously developed and built.
16. C
India has been ranked 82nd with 44 points in the Global Bribery Risk Index in 2021. India has slipped below five points in this index. Whereas in the year 2020, India was ranked 77th in the list with 45 points. 194 countries have been included in this list.
17. C
Indian Railways has recently started the first pod hotel at Mumbai Central Railway Station. Such pod hotel rooms are quite famous in America and Japan. If a passenger feels tired after the train journey, then he can rest by staying at this pod hotel at the station itself.
18. A
American author Patrick Raiden Keefe recently won the £50,000 Bailey Gifford Prize for non-fiction for his book “Empire of Pain: The Secret History of the Sackler Dynasty” Is.