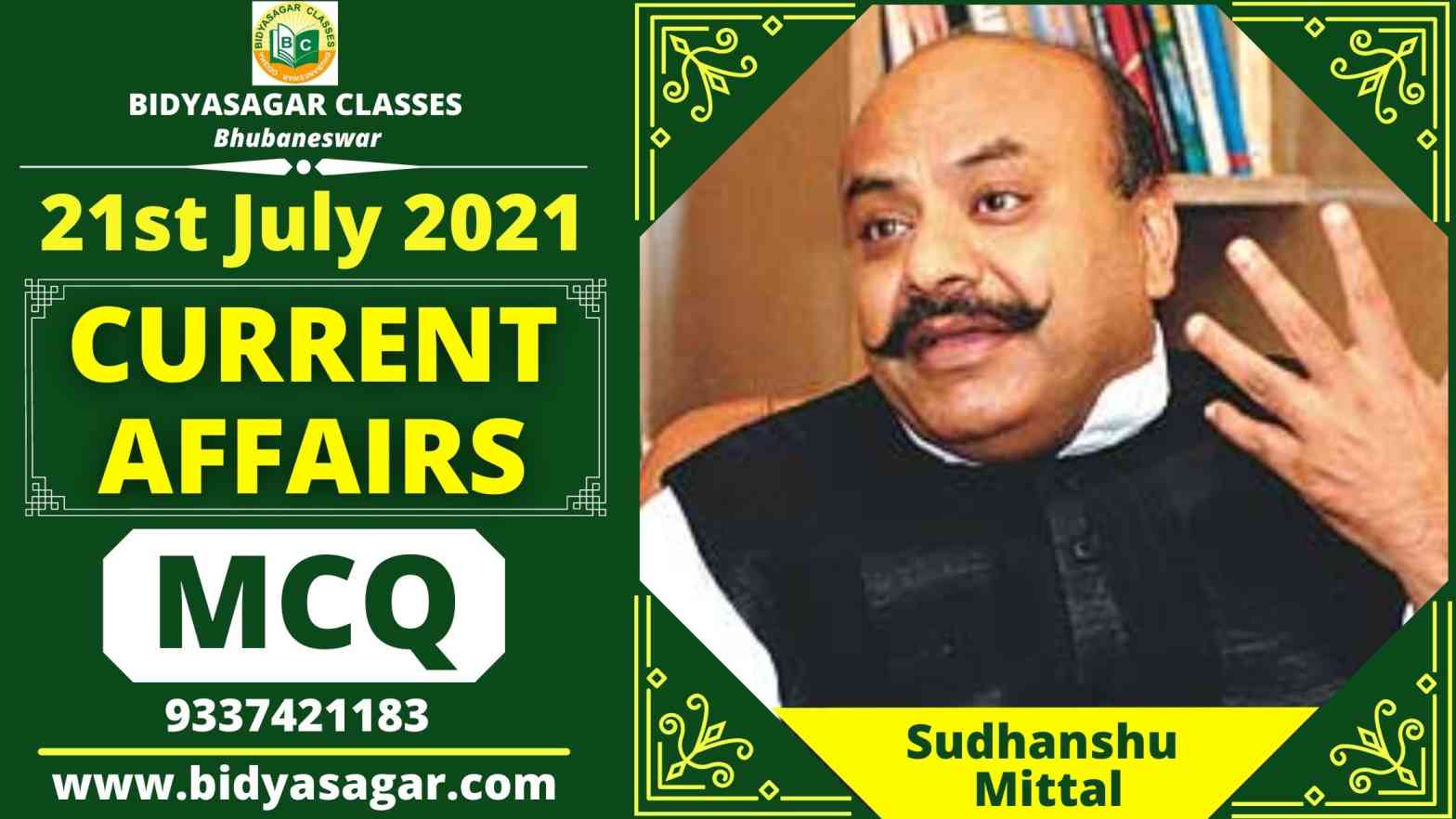 In this article, we will discuss MCQ on important current affairs of 21st July 2021 and their answers with explanations.

1. Which IIT institute of India has developed the first of its kind oxygen rationing device – Amlex?
A. IIT Pune
B. IIT Kharagpur
C. IIT Delhi
D. IIT Ropar
2. Recently who has developed indigenous high strength beta titanium alloy on an industrial scale?
A. ISRO
B. DRDO
C. BCCI
D. Tata Group
3. What has been established by the Government of India to promote and facilitate investment in the dairy sector?
A. Dairy Increase Accelerator
B. Dairy Move Accelerator
C. Dairy Mix Accelerator
D. Dairy Investment Accelerator
4. With an aim to focus on the logistics sector, which awards have been instituted by the government?
A. National Logistics Excellence Awards
B. National Logistics Awards
C. National Excellence Awards
D. None of These
5. Which state government has started an initiative to promote commercial cultivation of “agar” trees?
A. Government of Kerala
B. Gujarat government
C. Government of Maharashtra
D. Government of Tripura
6. Which ministry of the Government of India has recently approved 7 companies for the sale of auto fuel in the country?
A. NITI Aayog
B. Ministry of Sports
C. Ministry of Information and Broadcasting
D. Ministry of Petroleum and Natural Gas
7. Who among the top corporate sponsors of the Tokyo Olympics has announced that it will not air Olympic-related TV commercials during the Olympic Games?
A. Lakemy
B. Sony
C. Toyota
D. Hyundai
8. With foreign exchange reserves of $608.99 billion, which country has become the country with the largest foreign exchange reserves in the world?
A. First
B. Third
C. Fourth
D. Fifth
9.Who among the following will be conferred with Mohun Bagan Ratna posthumously?
(A) Sumit Banerjee
(B) Amit Banerjee
(C) Shibaji Banerjee
(D) Sangeet Banerjee
10.The Federal Bank launched which of the following Artificial Intelligence-powered virtual assistant to help customers with banking-related queries anytime?
(A) FABY
(B) FEBY
(C) FECBY
(D) FEDDY
11. The International Cricket Council (ICC) inducted _________, _______ and _______ as members at its 78th Annual General Meeting.
(A) Mongolia, Tajikistan, and Switzerland
(B) Mongolia, Turkey, and Switzerland
(C) Mongolia, Tajikistan, and Swaziland
(D) Mauritius, Tajikistan, and Switzerland
12. Who is the author of the book “RSS: Building India Through SEWA”?
(A) Narendra Modi
(B) Amit Shah
(C) Ramesh Pokriyal
(D) Sudhanshu Mittal
13. Pension Fund Regulatory &Development Authority has allowed foreign companies to hold up to ________________stake in Pension funds.
(A) 45%
(B) 25%
(C) 49%
(D) 74%
14. Bank of Maharashtra has signed a MoU with _________ to boost ongoing developmental initiatives linked to priority sector lending in Maharashtra.
(A) SIDBI
(B) SEBI
(C) NABARD
(D) EXIM Bank
15. Which of the following country has ended male guardian requirement for women attending hajj?
(A) Saudi Arabia
(B) UAE
(C) Qatar
(D) Oman
16. Balika Panchayat successfully held at Kunariya village in ________.
(A) Rajasthan
(B) Gujarat
(C) Uttar Pradesh
(D) Madhya Pradesh
17. Which of the following state will be the first state in India to issue educational documents using blockchain technology?
(A) Tamil Nadu
(B) Kerala
(C) Karnataka
(D) Maharashtra
18. Who among the following has won Sparkassen Trophy at Dortmund?
(A) Magnus Carlsen
(B) Vladimir Kramnik
(C) Viswanathan Anand
(D) Garry Kasparov
19. Razorpay has acquired artificial intelligence (AI)-based risk analysis platform ____________, marking its third acquisition since inception.
(A) Microsoft Azure
(B) MindMeld
(C) Dialogflow
(D) TERA Finlabs
20. In which of the following country chess was invented?
(A) China
(B) India
(C) USA
(D) UK

1. D
Indian Institute of Technology, Ropar has recently developed a first of its kind oxygen rationing device-AMLEX with an aim to increase the life of medical oxygen cylinders three times. This device- Amlex supplies the required amount of oxygen to the patient during inhalation and exhalation of carbon dioxide by the patient.
2. B
Recently Defense Research and Development Organization (DRDO) has developed Vanadium, Iron and Aluminum containing Vanadium, Iron and Aluminum on an industrial scale at the premier “Defence Metallurgical Research Laboratory” located in Hyderabad for use in Aerospace Structural Forgings. A high strength metastable beta titanium alloy Ti-10V-2Fe-3Al is developed.
3. D
The Department of Animal Husbandry and Dairying, Government of India has set up Dairy Investment Accelerator to promote and facilitate investment in the dairy sector in the country. This investment accelerator is a cross functional team formed to act as an interface with the investors.
4. A
The Government of India has instituted the National Logistics Excellence Awards with an aim to focus people’s attention on the logistics sector. This award is divided into two categories. The first group is for the logistics infrastructure / service provider and the second is for the various user industries.
5. D
The state government has started an initiative to promote commercial cultivation of “agar” trees in Tripura. Also, in the next 3 years, the state government has set a target of achieving a business of Rs 2,000 crore from this sector. Agar is an evergreen tree that grows in abundance in the state of Tripura.
6. D
The Ministry of Petroleum and Natural Gas has recently approved 7 companies for the sale of auto fuels in the country. Along with this, Chennai-based IMC, specializing in oil terminals, has also been approved to sell auto fuel.
7. C
Toyota, one of the top corporate sponsors of the Tokyo Olympics 2020, has announced the cancellation of all its Olympic-themed advertisements during the Tokyo Games. Toyota will remove all advertisements related to the Games from rotation (broadcast). Whereas in 2015, Toyota signed an eight-year deal to be the worldwide Olympic sponsor.
8. D
In the 20th Lok Sabha, State Finance Minister Pankaj Choudhary has said that India has become the fifth largest foreign exchange reserve country in the world with foreign exchange reserves of $ 608.99 billion. At present the Reserve Bank of India and the Government of India are actively monitoring the external situation in the country.
9. C
Former India and Mohun Bagan shot-stopper Shibaji Banerjee, who famously denied Brazil’s legendary football player Pele from scoring a goal in an exhibition match in 1977, will be conferred with Mohun Bagan Ratna posthumously.
10. D
The Federal Bank launched FEDDY, an Artificial Intelligence-powered virtual assistant to help customers with banking-related queries anytime.
11. A
The International Cricket Council (ICC) inducted Mongolia, Tajikistan, and Switzerland as members at its 78th Annual General Meeting.
12. D
BJP leader Sudhanshu Mittal”s book on the Rashtriya Swayamsevak Sangh (RSS) has now been translated into Chinese language. “RSS: Building India Through SEWA”, which talks of RSS”s history, ideology and policies, and their subsequent impact on the nation, was brought out by Har-Anand Publications in 2019.
13. D
Government notified a hike in the foreign direct investment limit in pension fund management to 74% from 49% under the national pension system (NPS), opening doors for experienced foreign partners in this space and facilitating more competition in the fledgling segment.
14. C
Bank of Maharashtra has signed a Memorandum of Understanding (MoU) with National Bank for Agriculture & Rural Development (NABARD) to boost ongoing developmental initiatives linked to priority sector lending in Maharashtra.
15. A
According to the Ministry of Hajj and Umrah, Saudi Arabia, women can now register for the annual Hajj pilgrimage without a male guardian (marham).
16. B
The Kunariya village of Kutch district in Gujarat has come out with a unique idea of holding Balika Panchayat.
17. D
Maharashtra will be the first state in the country to issue educational documents using blockchain technology. Forgery of documents is a serious concern for various educational and other institutions.
18. C
Viswanathan Anand defeated Vladimir Kramnik to win the Sparkassen Trophy at Dortmund. Anand needed only a draw in the final game of the No-Castling Chess event, and he got it in 40 moves.
19. D
Razorpay has acquired artificial intelligence (AI)-based risk analysis platform TERA Finlabs, marking its third acquisition since inception.
20. B
Chess was invented in India around the 8th century. Then it was known as chatrang, and changed over the centuries by the Arabs, Persians and then ultimately the medieval Europeans, who changed the pieces’ names and appearances to resemble the English court.